Vroom with a View

For years, he dreamt of riding out on his motorcycle and finding adventure, like the heroes of his books. But one should treasure every little trip while waiting for that big one to materialise 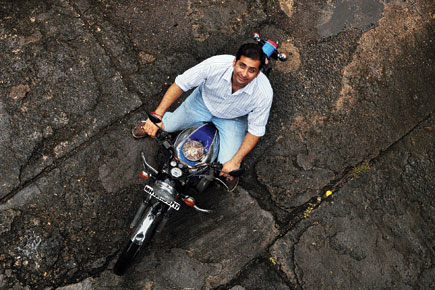 For years, he dreamt of riding out on his motorcycle and finding adventure, like the heroes of his books. But one should treasure every little trip while waiting for that big one to materialise


If I cast my mind back to the mists of time, one of my earliest memories is of riding up front on my dad’s Vespa, seeing the needle rise and feeling the wind in my hair. I think motorcycling infused itself into my blood even before I had my first full set of teeth.

Besides riding on my father’s scooter, I would hear tales from one of his friends, Bomi Amaria, about their ride, on their Vespas in 1962, from Bombay to Srinagar and back. For me, that was the pinnacle of adventure and travel: to feel the wind in your face, your trusty Vespa eating away the miles.
From that also grew admiration for simple machinery, because the Vespa was the simplest form of motorised two-wheeled transport. It had a small single cylinder two-stroke engine that sat over the rear wheel and ran on a mixture of oil and petrol, which did away with the need for a chain like in motorcycles and a complex lubrication system. But it was a robust little scooter, because it carried two passengers plus luggage all the way to Srinagar, to Sonmarg, to Manali, and even to the Rohtang Pass.

I would often ask Bomi Amaria if it wasn’t foolish pitching such a puny scooter (the engine developed just 5.5 bhp) against such terrain on such a long road trip. And the answer was always simple: we looked after our scooters well and they served us well.

When I was old enough to do motorcycle road trips, I went by the same mantra and bought the Royal Enfield Bullet. It was simple and uncomplicated, and if you looked after it well, it performed faultlessly.

I bought it, ostensibly, because I would ride from Pune to Bombay every weekend, but my grand plan was the Great Bombay to London Overland. Hoping to glean all the information I could about long-distance motorcycling, in 1998, I came across a book called One Man Caravan. It became my first-ever online purchase through Amazon. It tells the story of the author, Robert Edison Fulton Jr’s ride from Austria to America via the eastern route. Fulton, a 23-year-old American in 1932, was studying architecture in Austria, and his father suggested that he take the long route back to America. When he aired this idea at a dinner party, the owner of Douglas Motorcycles offered him one of the company’s newly-developed motorcycles, a 1930 Douglas T6 model, an opposed twin, 600 cc side-valve bike, to ride around the world. What followed was swashbuckling adventure that makes One Man Caravan un-put-downable. It tells how he slept in jails in Turkey, spent seven weeks in a hospital in Baghdad recovering from jaundice. He crossed the Arabian Sea on a tramp steamer and disembarked in Bombay and then rode north across Rajputana, the Punjab and Kashmir. It gets even more fascinating as he writes about riding through the Khyber Pass from India into Pakistan under the watchful eyes and rifle barrels of Pashtun tribesmen. After riding around Afghanistan, Fulton rode back into India and did the Bombay to Calcutta slog in three days in 1936 on what is today’s National Highway No 6. He took a steamer to Malaya (today’s Malaysia) and rode through Siam (today’s Thailand) and through China. Finally, Fulton took a steamer from Tokyo to San Francisco, rode across America and arrived home in New York on Christmas Eve 1933 after 64,000 km of travel.

It was a tale of such adventure that I wrote to the publishers requesting them to forward my letter to Robert Edison Fulton if he was still alive (there wasn’t Google or Wikipedia then and getting such information wasn’t so easy). I was ecstatic to receive a letter from Fulton in his own handwriting a few months later. He told me to just ride; if I didn’t have the means to do my dream trip, then I should do a smaller one, but I should get out there and ride. The next month, I strapped my luggage onto my bike and set off for my first-ever long-distance motorcycle road trip. From Bombay to Almora in the Kumaon Himalayas. I had a meagre budget, which meant that I ate and slept at dhabas. I would ride to squeeze out the maximum mileage from every drop of petrol and choose the cheapest items on the dhaba menus. But that trip was a realisation of how much I enjoyed road travel and the opportunities to shoot photographs it afforded. I came back from that ride and wrote my first travel story.

You could say that those childhood rides on the Vespa, the wonderful travel tales told to me by Bomi Amaria and my communication with Robert Edison Fulton Jr set me on the course to doing what I absolutely love for a living—road travel, photography and writing.

A few years later, I did that great Indian Road Trip—riding the high road from Manali to Leh and then onwards to Kargil, across the mighty Zojila to Sonmarg and Srinagar and finally Bombay. Like Bomi Amaria so many years ago, I had put my trust in my simple two-wheeler, looked after it well, and had it serve me admirably, without a flutter or flaw.

I would have liked to visit Mr Fulton but he passed away in 2004, before I could make it to America. But last year in March 2010, I was at Oaxaca in Mexico for the press drive of the devilishly sexy and fast Mercedes-Benz SLS AMG. I had driven the car from Puebla to Oaxaca—465 exciting kilometres over the classic Pan American Highway. It was special driving the SLS AMG on this particular road because the predecessor of this car, the Mercedes-Benz 300 SL, won its greatest victory on this very road in the 1952 Carrera Panamericana. There were three 300 SL cars taking part in that race and two of them had secured first and second positions; the third car would have secured third place had the driver not been disqualified on the final day on a small technicality.

This unfortunate driver was the American John Cooper Fitch. What came as quite a surprise to me while reading about the 1952 race was that before he was a race driver for the German Mercedes-Benz racing team, John Fitch was a WWII fighter pilot. Less than 10 years previous to racing side by side with Germans, he was trying to shoot them out of the sky in dogfights over Europe. I further read that on 18 November 1944, John Fitch, at the controls of a P-47 Thunderbolt piston-engined fighter, became one of the first pilots to shoot down the Messerschmitt Me262 jet fighter.

I remember thinking that I would have enjoyed meeting John Fitch. Now here was a man who had lived life to max, and had packed in more adventure into it than most of us could even imagine.

So you can imagine how thrilled I was when I walked into the ballroom for dinner that evening and found John Fitch there. He’d been invited to Mexico by Mercedes-Benz to grace the event. At 93, John Cooper Fitch was standing unaided, striding around the room chatting keenly with people, shaking their hands with a grip as hard as teak and nursing a glass of red wine.

I was honoured to shake his hand. It was like connecting with an era long gone. I had read fascinating accounts of WWII dog fights all my life, and here was a man who’d been in many.

I was even more thrilled when I was seated next to him at dinner, and it was while we were attacking the dessert with gusto and talking about epic journeys and automobiles that I told him how I’d written to a man called Robert Edison Fulton Jr. I literally saw a spark of happiness flash in his eyes. “You’ve been in touch with Bob? He was my best friend. We used to fly around together all the time. I’m so glad to talk to someone who knew him.”

It truly is a small world. That day I realised that there was truth in those words.