Pune teenager Krushnaa Patil climbed Mt Everest recently and spent half an hour on top of the world. But strangely, it wasn’t quite the whoohoo moment she thought it would be. Her Everest moment had come a little before the summit... 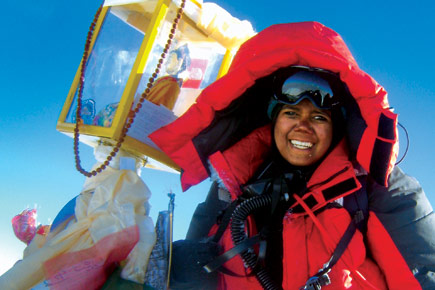 Krushnaa Patil climbed Mt Everest, but strangely, her Everest moment had come a little before the summit


I developed a love for the outdoors very early in life. My mother Ranjana began sending me to adventure camps when I was in Class III. My parents also took me to the Himalayas for every vacation. We never stayed in hotels. We carried our own tents and pitched them in the countryside.

I completed my advanced course in June 2008 and was lucky to be chosen for NIM’s pre-Everest, Mt Satopanth ( 7,075 metre) expedition in August 2008. Satopanth is technically difficult, and hence, I was keen on it. And, there was the incentive of being the youngest climber to do so. At this point, there were no plans to climb Everest. But as Satopanth was a pre-Everest expedition, it was discussed day in and day out. The mood was infectious.

But it’s bloody hard to make the NIM Everest team. You have to be an NIM instructor, an Indian Mountaineering Federation (IMF) member or an Uttaranchal local. Some of my NIM instructors suggested I climb with an international team from Kathmandu. But that was expensive. It was already the end of January. Everybody at home pitched in. My uncles, aunts, parents, all of them. Finally, my parents took a loan of Rs 30 lakh from the Saraswat Cooperative Bank.

Meanwhile, I enrolled for the ‘search and rescue’ course at the NIM. I also realised that Dickey Dolma of Himachal Pradesh had been four months younger than me when she scaled Everest. But somehow, records didn’t matter anymore. I was hooked.

Climbing Satopanth (7,075 metre) without oxygen was a big confidence boost. In fact, to get to the top of Satopanth, we walked 22 hours non-stop. We began at 7.30 pm one evening, reached the summit at 10.30 am in the morning and came back to camp at 5.30 pm the same evening. And unbelievably, I was not tired. Everest was calling.

I completed my ‘search and rescue’ course at NIM on 8 April and travelled to Kathmandu the very next day to join the Asian Trekking team. It was led by Dawa Steven Sherpa and comprised one Dane, one German, five Americans and me, the lone Indian.

As my team had already left for the Everest Base Camp (EBC), I had to walk from Lukla (2,810 metre) to the base camp (5,330 metre) with my Sherpa, Gyalu. Normally, this walk can take even 15 days, but I completed it in eight days, as I was already acclimatised to high altitude weather at the NIM course.

Once I was on the Everest trail, I decided to stop thinking of family and friends and began focusing only on the job at hand. No, not even phone calls home. I felt it would weaken my mind.

From base camp to the summit takes about four days. I think the most difficult phase was the walk from base camp to Camp I as it passes through the Khumbu icefall region. The most accidents on any Everest expedition occur here. There are deep crevices and sudden avalanches can occur. And sadly, we lost one of our Sherpas, Lakpa Nuru Sherpa, in an avalanche on 7 May. We couldn’t even locate his body. I was unscathed, I said a little prayer.

On the other hand, the walk from Camp I to Camp II, though safer, is very taxing. The weather can get extremely hot on this stretch. This is because of the sun’s reflection off the surface of Everest, Nupse and Lhotse peaks and from their respective floors. The Lhotse Face, too, with its sharp 65-75 degree gradient, is very challenging.

I reached Camp IV (South Col) on the morning of 20 May. It was the day before the summit. We had from 12.30 pm in the afternoon to 8.30 pm at night to do nothing except eat, sleep, drink, pee, shit, whatever. This, in fact, was one of the toughest legs of the trek.

I just sat in my tent, thinking of how I was going to get to the summit. I asked Apa Sherpa, our climbing leader, how many hours it took to reach the summit. Six to seven hours, he said. Now, Apa has climbed the Everest a record 19 times, so I said, ‘Not for you Apa, but for people like me.’ He laughed. ‘Maybe 12 hours.’

I began my summit bid at 9 pm on 20 May with Gyalu Sherpa. We had time till 12 noon the next day to reach the summit. It was a memorable climb. I was very excited when I reached the South Summit at 8,500 metre. It was 5 am, the sun was rising over the horizon and the sky was pinkish-orange. As the sun rose, the dark shadow of the forbidding Everest peak fell on the horizon to the west. I had never seen anything quite like this.

From where I stood, I could actually see the summit. I felt I could do it in exactly 15 minutes. Yet, it took me 90 minutes to reach the top. On my way to the summit, I met my NIM instructors, who were coming down. They were excited to see me. ‘You can do it Krushnaa!’ they said.

I used up all my energy and excitement in reaching the summit. So when I actually set foot on top of the world, it wasn’t a ‘whoo-hoo’ moment. I just thought this is it. I have done it. Let me take pictures and get down.

Actually, besides Sherpa Gyalu, there was nobody there to celebrate my success with me. And it was Gyalu’s fourth time at the summit. He clicked my pictures quickly as the batteries tend to die out. Unfortunately, in his haste, he got only two colours of our flag. My mother has still not stopped scolding me.

After the pictures were taken, I sat on the summit and admired the view. I took pictures of the peaks around Everest, like Makalu, Lhotse, Nupse and Cho Oyu. I went through the quotes of several Everest summiteers in my mind, but couldn’t see what they saw. I guess, everybody has his/her own Everest moment.

About half an hour later, we decided to start our descent. Everest is a mountain with crazy mood swings. There are rapid changes in weather and we didn’t want to take a chance.

I got down to South Col by 12.30 pm in the afternoon and spent the night there. On our way down, some of us actually sprinted to base camp. It was almost as if we were afraid of dying after climbing the peak. I reached base camp on 23 May. Three others from our group of eight climbers also reached the top. All of them happened to be Americans: Nic Cunningham (26), Yuri Putizer (51) and Bill Burke, who at 67 is arguably the oldest American to have achieved the milestone.

I was quiet through the expedition, but after I had summited, I was back to my chatty self. My seven, male teammates were very happy with my success. They would stand up and sing ‘Krushnaa Patil…Krushnaa Patil…’ all the time. It was a weird song, but it was pretty popular from base camp to Kathmandu.

As we were an eco-friendly expedition, we did not dispose of any garbage, including our pee and shit. We brought back five tonnes of assorted garbage, which included a huge collection of oxygen cylinders, masks, jackets, even a helicopter wing. Some of the cylinders date back to the 1950s, 1960s and 1970s. Most waste will be converted into artefacts by a Fine Arts school in Kathmandu and sold for charity.

At present, I am sitting at home in Pune preparing for my first-year BA exams. But already, I’m thinking about the ‘seven summits’ trail, attempting to climb the tallest peaks in the continents of Australia, Africa, Europe, North and South America and Antarctica.