Shy lovemaking, illicit liquor consumption, and other elephant habits that this researcher has noted in his 15 years on their tail 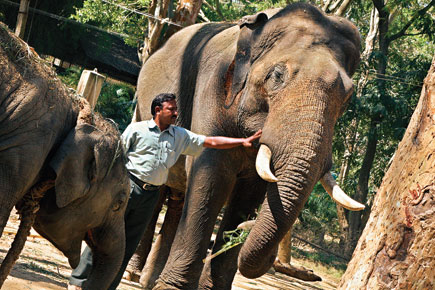 Shy lovemaking, illicit liquor consumption, and other elephant habits that this researcher has noted in his 15 years on their tail


The elephant drill is very clear. In case we run into wild elephants, we have to run away from them at top speed and reach higher ground. Never run in its direct path or where the animal can come for you. This is what my tracker, Ramaswamy, an incredible Tribal, would always say when we set out on the elephant trail.

One hot afternoon, we were returning hungry from a field meeting on a bicycle. Ramaswamy was pedalling furiously and I was riding pillion on the carrier at the back. The metal road ahead angled sharply into a ditch before rising steeply along a hillock. We had ridden that way many times. But that day, a shepherd sitting on the ridge was pointing at something and shouting. As we whistled past him down the incline, we realised there were elephants on the side of the road. We went past one, two, three, startling the herd, before a fourth female took some steps forward and brandished her trunk inches from us. I shouted at Ramaswamy to keep pedalling. He jumped off the cycle and told me in crude Tamil to shut my trap and run for it. “You go left, I go right,’’ he said, and scrambled up a cliff, while I jumped headlong into a bush. Without looking back, I ran for my life and joined him further up the road, panting. He was hunched on his knees, grinning ear to ear. He gestured down the road. Half-a-dozen elephants, including the female who charged at us, were examining our cycle. Within minutes, though, they lost interest and disappeared into the foliage. Ramaswamy went down to retrieve the cycle. It was still in good enough shape to ride doubles.

It’s not that elephant researchers run into their subjects every day. We normally watch them from a distance. But we always have to be careful, as they are nimble, brainy and unpredictable. They can run in short bursts touching 40 kmph. In a few strides, one of them can overtake a person running, lift him/her up by its trunk and toss him/her to the ground. Elephants can be violent towards people, as we often chase them away.

I studied MSc in wildlife biology from AVC college, affiliated to Bhartidasan University in Tamil Nadu, and later completed a PhD on elephant corridors. My thesis was titled Significance Of Corridors For Asian Elephants. I am a strategist for conservation and management in the Tamil Nadu part of the Nilgiris biosphere, and work as a researcher for the Delhi-based Wildlife Trust of India (WTI).

I came in contact with elephants during my MSc in 1994-95, when I wrote a dissertation on human interference in elephant corridors. My work entails long treks along elephant corridors in forests and habitats. For my PhD, I walked 1,286 km, following several herds. It took me nearly two years visiting various corridors in various seasons. I studied the degree of utilisation of corridors and lands by herds as they moved.

I took Ramaswamy along with my parents for my convocation. He was so moved that he cried as he had never been invited to such an occasion, despite many researchers taking his help as a tracker.

Elephants cannot confine themselves to any given area. In a day, the giants can walk 15-20 km easily. On an average, an adult requires 200-250 kg of food—barks, leaves, wild fruit everyday. Their digestive system, though, is poor. Such large-scale eating destroys the habitat and that’s a reason why herds keep moving. Also, elephants are like humans. They love everything fresh. The movement provides respite for other animal species that share forest space as well as plants. Only when there is a fragmented or isolated habitat, do these jumbos get closer to human settlements, resulting in human-elephant conflicts. Such forays lead to crop damage. Farmers shoot and poison the beasts when they scavenge for oranges, guavas, jackfruit, bananas, jowar, ragi, jaggery and even illicit liquor. The cleverer ones, though, are not deterred by electric fencing or trenches.

I can easily identify the elephants I research. I have seen and observed calves getting bigger, older and even trying to mate. My favourites are a cut-tailed tusker, an ankle-tail tusker, a female with a cut on her right ear and a makhna (tuskless male) that seems to be mast (in heat) every November when I see him passing a particular corridor without fail. He gives me a lot of trouble, often wandering off alone in search of mates and alarming villagers with his aggressive behaviour.

I have had many close encounters. Ramaswamy has saved my life on many occasions. Once, when we were walking along the bottom of an embankment of a dry water body at dusk, a trunk suddenly slithered out over us. It waved menacingly, looking to slap us. We ran along the bed and climbed a hillock. Up there, we realised we had blundered into a herd of 60-70 looking for water.

These mammals move silently, and their presence can be deciphered only by looking for feeding signs like torn barks, scratch signs on trees and broken twigs. The only sound an entire herd makes is the occasional snapping of a twig. We have to wear dark clothes while following them, as anything flashy or white is an advertisement of our presence. On treks, we carry only water, stationery, a pair of clothes, a flashlight and an extra battery. Sometimes, we carry tents.

Recently, I noticed a young bull mounting a female in public view—which is very unusual, given the animals’ stressful circumstances; they were trapped without water or food. I got information that a big herd was stranded in a dry pond. When I went there, I saw the animals surrounded by more than 500 people. Suddenly, a young bull mounted a female and started mating! Elephants normally never copulate in the open. It was certainly an unusual sight.

While on field trips, we get called by locals to chase away elephants. They forget that they have crackers, drums and lights, and  here I am completely unarmed. As if the animal will respect me for my PhD! But, we do go along with villagers to win their confidence. Wildlife conservation is all about forging trust with local communities.

Elephant conservation is getting a lot more response from governments now. The WTI has identified a number of corridors in India that need to be restored. And we are using technology quite extensively, and I am particularly interested in working with radio-collared elephants.

Despite 16 years chasing elephants and documenting them, my love for the huge animals is far from saturated. There is something new to learn from every field trip.

As told to Anil Budur Lulla