She is India’s only known patient of Von Hippel-Lindau syndrome, and has undergone eight surgeries so far. She couldn’t complete college because she was always waiting in doctors’ chambers. She lost her father as he couldn’t afford a bypass surgery. Payel Bhattacharya on the loneliness and anger of being the only one of her kind 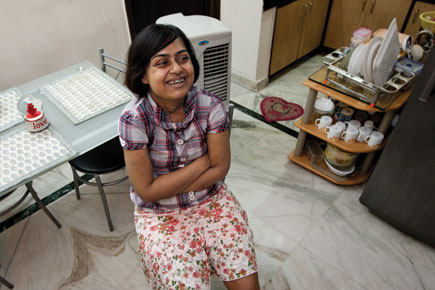 She is India’s only known patient of Von Hippel-Lindau syndrome, and has undergone eight surgeries so far.


I was three and was jumping and dancing all over the house, much to my parents’ annoyance when I felt a shooting pain in my left foot. I do not remember much, but do recollect that I was trying a twirl standing on my left leg, when I suddenly fell down on the floor of our ancestral home in Ballygunge in Kolkata. Though I barely remember the incident myself, as a child I could rattle off the details faster than perhaps the table of two, as I had heard my parents telling the story to doctors, friends, relatives and strangers much too often: “She was dancing when she fell, cried and winced in pain, and then we noticed a slight swelling in her left foot.” The unsuspecting doctor in the neighbourhood conjectured that it was a minor hairline fracture, a mishap which is common among naughty and hyperactive children of that age. He assured my parents that I would be fine in a matter of a few days, and would soon dance again.

It turned out that he was wrong. The pain never left and the swelling in my left foot remained for the next nine years till doctors realised that it was a tumour that had to be surgically removed. I was 12 then and it was my first surgery. Seven more were to follow in the years to come. That twirl I barely remember myself turned out to be my last twirl ever, it was actually my first encounter with what I later learnt was Von Hippel-Lindau (VHL) syndrome, a rare genetic disorder that I was born with and meant to live with for the rest of my life. But it would only be in the year 2006, nearly 23 years after I developed the swelling in my leg, that doctors were finally able to diagnose me with the VHL condition. Till then, we were running around like headless chicken, switching between doctors in Delhi and Kolkata, my father’s savings wrung dry, as we waited for a definite answer.

While my father struggled with footing my medical bills, I was struggling with trying to fathom what was happening around me. Though I did go to school, I remember missing classes because more often than not, I would be waiting in various doctors’ chambers. Still, I managed to finish school but I couldn’t go to college.

I had trouble explaining the pain I experienced to my doctors. I would often tell them that I was doing okay only because I couldn’t describe the crushing, heavy ache. But my mother could tell from my pale look and expressions; she would correct me and help articulate my troubles. Today, if you were to ask me, I’d say it is similar to how you would feel if your bones were being crushed with a mortar-and-pestle.

Sometimes, it is worse.

VHL syndrome is caused by a gene mutation and leads to an abnormal capillary growth in internal organs like the lungs, heart, pancreas, liver and intestines. Normally, our capillaries branch out gracefully like trees. In VHL patients, little knots of extra capillaries form tumours that have to be removed. That makes me a mutant of sorts, but I wonder if the X-Men would take me as part of their clan. I have had tumours removed from my foot, knee and brain, followed by a liver transplant surgery.

After the liver transplant surgery, I have had to take regular doses of immunosuppressant drugs which have weakened my immunity greatly. As a result, I have now been diagnosed with Tuberculosis (TB) of the bones, which is resistant to any possible treatment. I had to undergo a surgery on my neck for the removal of an enlargement and have partial paralysis on the left side of my face due to a brain surgery that was done in 2006.

Being the only known living patient in the country, very few people, including doctors, know about my illness. There was one case of a 69-year-old man that was registered at the All India Institute of Medical Sciences (AIIMS) in the late 70s. There are societies for patients with VHL syndrome in the United States, and we can form a society in India affiliated with that society. But I am the only one here, so I stay in touch with them as an individual.

Being India’s only known patient may sound fancy and unique enough to enter some sort of book of records, but it is quite a curse in itself. The ordeal started with my doctors taking so long to identify the syndrome, and now, it is all about arranging the finances and footing my medical expenses, which run up to at least Rs 35,000 every month. I have to depend on corporate donations and financial assistance provided by friends whom I can only keep in touch through Facebook and email. Even corporate funding or assistance from NGOs is a task. Once, when I went to meet the representatives of an NGO of international repute, one of the representatives thought I was lying about my illnesses. He actually remarked, “It’s a miracle that she has survived all diseases possible in the world—Heck, she is lying.” I have never felt as lonely and angry as I did that moment.

People often suggest alternative therapies of treatment like aura reading and reiki. They tell me that ‘We are there for you and will give you moral support’. But that makes me angry. I don’t need moral support or strength. I need money for my treatment, which is being done by the best doctors at Gurgaon’s Medanta hospital. Treatment, not moral support from others, will help me live.

Throughout my life, my father had been my mainstay—emotionally and financially. He took loans and funded my treatment by scraping together funds from his PF account, till he passed away in April 2010 after a heart attack. He had had his first heart attack just around the time I had my brain surgery. He was on a ventilator for nine days, but was back with me when I had my liver transplant within the next six months. He had an 80 per cent blockage in his heart, but postponed his bypass surgery as we couldn’t afford it. My liver transplant cost about Rs 22 lakh, and was funded through corporate donations. He had a second cardiac attack in April 2010, and this time, could not survive it.

Since April 2010, we have been on our own. My brother, who is a budding filmmaker in Mumbai, chips in to support my mother and me with our rent and expenses. Over the years, we have lost count of how many houses we have changed. From our 2,200 square yard ancestral home in Kolkata, we have now shifted to a windowless one-bedroom home in a crowded and suffocating unauthorised colony in South Delhi—just close enough to my hospital in Gurgaon. Since I cannot walk much, the cab fare still runs to about Rs 600 on each visit. Each time we shift homes, the size and count of furniture in the new home shrinks. We used to have poster beds in our Kolkata home, now we sleep on sofa-cum-beds just because our expenses have to be prioritised and our homes have become smaller over the years.

I often wonder why I had to be the one who had to give up her love of sketching because the finger muscles have weakened and cannot hold a pen for long. Why I cannot take a walk to the malls next to my house. Why I literally have to feel like a beggar every month, when all I need is some money to foot my medical bills. Science answers my queries—a mutant gene did it all. As for my anger, most often I vent it through my poems that I post on Facebook for my friends to read. It’s my only way of communicating and keeping in touch with them.

As told to Aanchal Bansal