The Road to Freedom

What assures a man his freedom? Gopal Kaushik tried running away from home, even adopting a life of crime. But he remained miserable—until the day he bought his bike 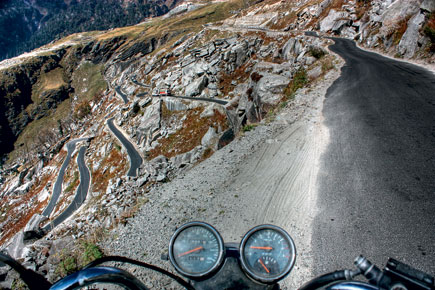 What assures a man his freedom? Gopal Kaushik tried running away from home, even adopting a life of crime. But he remained miserable—until the day he bought his bike


It was 2007. It was my birthday. I had just turned 30. I woke up in a small village in Uttar Pradesh (UP), unconnected by road or electricity (though there was a phone network that Shams was able to reach me on later that day). I put a mirror to my face and saw three white wisps on my chin. And it hit me. Soon there would be many more. These were the best years of my life and I was just wasting my time producing TV shows. And if I didn’t do something fast, I’d probably never do something about it. I shaved. But it kept echoing in my head—‘I’m wasting the best years of my life’.

Time speeds up as you grow older. Till 25, you struggle to pass each birthday, each new year, each examination. But after 25, life is just this fast blur. You lose track of time. Birthdays, anniversaries, festivals, dreams, desires, passion, everything seems to whiz by like small mofussil stations through the window of a superfast train. And before you realise it, you stare white hair in the face.

In the afternoon, I got a call from work. It was Shams Raza Naqvi, a young colleague. He wanted leave, so he could ride to Leh with friends. It was a tricky proposition. I was already on leave, biking across UP, and so were some others of the team. But Shams was persistent. He said if I didn’t let him go, he’d quit. Much as I hate someone holding a gun to my head, I couldn’t lose a good teammate like Shams, so I relented. To this day, I thank him for that wake-up call.

Shams came back a week later, with a gift, a keychain from Khardung La: ‘Highest Motorable Pass in the World’, it said. How thoughtful! I told him he could keep it. I’d go and get one myself.

One of the shows I was producing at the time was a car-and-bike show. I asked the gang to organise a test-ride of Royal Enfield’s new bike, the Machismo 500 LB. And we set out, two bikes, two cars and a crew of 13, on a 2,100 km trip all the way from Delhi to Leh, capital of Ladakh.

I was living the Indian dream. I was single: no responsibilities, no liabilities. I had a great job; some would say I had done very well for myself. I had everything I could ever want, in fact I had more. But somehow it was more like being drugged. A strange stupor had set in. Yes, there was the satisfaction of a job well done, the joy of recognition on winning an award or two, and maybe even a kick in getting one’s mug on TV every once in a while. I’d settled into the fast lane, and life was good. But something was missing and I just couldn’t put my finger on it.

It hadn’t always been like this. There was a time when I was quite miserable. Life just didn’t seem worth living. Every time I sat in a car or plane, I’d wish it would crash, just so I could feel alive. It was that bad. I was working as a reporter for the only private news channel in the country. It wasn’t a bad job, but it wasn’t what I wanted.

Ever since I was a child, I’d wanted to be free. I’d strived for it, fought for it, run away from home thrice for it. I also made four serious attempts at a life of crime so I could buy my freedom (that’s another story altogether). But nothing worked, and I laid down my arms. In my submission, I went where life took me. And life was kind. I’d sailed through college in stoned stupor and drifted into television. Yet, I was miserable. Until the day I bought a bike.

It was as if the clouds fell away and the sun came out after a long, cold, dark spell of gloomy weather. Suddenly, I felt freedom like never before. I could be any place, at any time. It was like growing wings after being trapped in a cocoon for ages.

That was the time of zippy 2-stroke bikes and fanatic brand rivalries. A Yamaha and Suzuki stopping side by side at a red light would almost definitely burst into a race as soon as the light turned green. Nights, I ruled the streets, daytime was back to work, but I didn’t mind. Life took on a completely different meaning, and I was happy.

As time went by, I took to long-distance riding, and though it never undermined the importance of the cheap thrill, it was there to stay.  I fell in love with the mountains. I rode to Uttarakhand and Sikkim, Himachal and Kashmir, but I never considered digging my heels in and living there. Not until that fateful test-ride into the Himalayas in 2007.

Manali might not be as pretty as some of the other hill stations in India. No soft rolling hills in the distance.

You won’t find soft cotton clouds drifting by where you can touch them and swoon. These are the great Himalayas, huge, stark, right in your face. What it lacks in terms of tourist eye candy, Manali makes up for with its vibrancy. Manali has life. It’s bustling with energy. On any given summer day, the streets are full and restaurants packed with backpackers and travellers seeking anything from cheap thrills to enlightenment, to the famed Manali hashish. People filled with lust for life, people wanting to feel alive, beautiful people.

It was a beautiful sunny day as we rolled into Manali. I’d been here before, more than once. But this time, something was different. As the crew started shooting, it struck me. I was going to quit my job and move here.

Manali is a bike town. Almost everybody who’s not on foot is riding a bike. Every break in conversation is punctuated by the steady beat of a passing Enfield. This was my kind of place. I could live here, and ride into the mountains whenever I wanted. But there was one little problem—what was I to do when not riding? The answer presented itself that evening. We visited a cosy lounge bar in a village several kilometres away from town, and it was all very clear to me. I was going to open a pub in Old Manali.

‘And tomorrow, what shall tomorrow bring to the over-prudent dog burying bones in the trackless desert sand as he follows the pilgrims to the holy city’, says Kahlil Gibran in his book, The Prophet. So I decided to call my pub ‘The Lazy Dog’.

I have always been very lucky. Things always work out for me just as long as I don’t try too hard. That’s how The Lazy Dog fell into place. I called up my friend Yeon asking if he wanted to partner me on this, and he agreed. We found the perfect spot in one day, in the heart of Old Manali, on a huge rock cliff overlooking the river. The next day, we struck a deal. We designed and built it to our fancy, and the Dog was ready in three months. It was almost as simple as sowing a seed. Like it says on our menu, ‘Desire was the seed, the Lazy Dog is the tree, and what we serve here is the fruit’.

Running a pub is great. It’s like you have a huge living room and there’s a party always on. All kinds of interesting people walk in, many become regulars, and some become old friends. It’s a place for people from all over the world to come together and share. And if some days you don’t feel like partying, you can choose to be by yourself. Or you can pack up and ride out into the great mountains.

But it’s also a lot of work. On a busy day, I end up spending over 15 hours at the Dog. Hospitality itself doesn’t feel like work, but there are the supplies, inventories, accounts and taxes to be taken care of. And then there are other stressful situations; like last year I had to fend off a hostile takeover bid by a larger restaurant/bar. But that’s just a part of running any business.

Freedom is a state of mind, and this is as close as it gets for me right now. Even today, when I feel the world closing in on me, I remember the line ‘there is no problem so big that you cannot run away from it’, and I remember that freedom is just a twist of the wrist away.