Rejection slip after rejection slip almost led The Immortals of Meluha to an ignominious death before it rose to become an instant chartbuster. Amish Tripathi on being the author of an unexpected bestseller. 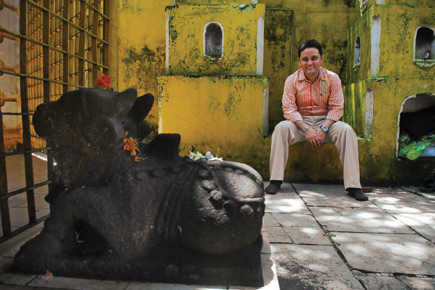 Rejection slip after rejection slip almost led The Immortals of Meluha to an ignominious death before it rose to become an instant chartbuster.


Life is surreal. There’s no other word for it. However, if you insist that one word is not enough, I can add another. Completely surreal. Over the last few years, life has taken me on a journey that has defied belief. But let me begin where stories should and usually begin. At the beginning.

This story was set in motion a little more than five years ago. At that point, I was a typical banker. An MBA, long hours at the job, EMIs to pay for a dream lifestyle, hyper competition at office and complex financial terms. Much of this still exists today, of course—especially the EMIs! But I got an idea five years ago that has added a completely new dimension to my life.

My family and I were watching television together. And we discovered something interesting. We all know that among Indians, gods are called Devas and demons are called Asuras. But what many of us don’t know is that among ancient Persians, gods were called Ahuras and demons Daevas—the exact opposite of what ancient Indians believed.

This triggered an interesting debate among us. We realised that if the ancient Persians and ancient Indians had met, they would probably be calling each other evil. Now, who would be right? Both? Neither? I got the germ of my idea from this conversation—that, often, we mistakenly label someone who is radically different from us as evil. Being different doesn’t make someone evil. So then, the obvious question would be: what is evil? A theory occurred to me as an answer.

Out of their love for me and against their better judgement—considering my rather incoherent attempts at poetry earlier—my family encouraged me to start penning my philosophy down on paper. So what eventually became The Immortals of Meluha started as a book of philosophy. When I did show that thesis to them, their worst fears were confirmed. I may have had an interesting thought to begin with, but I was boring everyone to death.

I received some sound advice from my brother and sister-in-law: don’t write a philosophy book; instead, try and write a thriller/adventure and let the philosophy come along with it. Good advice. Just one minor tiny little problem. I had never written fiction before in my life. Absolutely nothing. Not even a short story. How in Lord Shiva’s name was I going to write an entire book?

I tried the standard MBA route to handling difficult situations: training and planning. There are self-help books which claim they can create inspired authors. I devoured them. I also made a strategic and timeline plan, formulated in Microsoft Excel, which would guide me in writing my book. The plan was complete with character sketches, plans for writing short summaries of each chapter, definition of premise, conflict and resolution, etcetera.

The attempt was heroic. The results were disastrous. I was getting nowhere. The book was disjointed. There was no logical flow in how the plot would come to me. I would get a flash of something that would eventually appear in Book 3, and the next day, I would visualise something that fit in the second chapter of Book 1. Characters were not following their character sketches. I tried desperately to change the fate of one character. But no matter how hard I tried, any change appeared like a force-fit. To cut a long story short, I was struggling.

And then, I got some more good advice, this time from my wife, Preeti. She told me I shouldn’t think of myself as the creator of the book. Instead, I should believe that the characters I was writing about already existed. That they lived in another world. They had their own will. I had just been given the privilege to enter their world and record what I saw. Essentially, she told me not to approach the book with the brazenness of a creator; but instead, to approach it with the respect of a witness.

I made that mental shift. I stopped trying to control the story. I just accepted whatever came to me. And with Lord Shiva’s blessing, the trickle of the story flow turned into a flood. Soon, I was writing at a furious pace. And the story grew and grew.  What had started off as one book expanded so much that I eventually decided to break it into a trilogy. The entire story was soon complete in my mind and the first book of the trilogy was down on paper. Or the laptop’s hard disk, to be technically correct.

And then came the next part of the journey—the over two-year-long struggle to get published. I came to realise that the publishing industry was a rather clubby world. And the rules that applied in my native financial services industry did not apply here. An MBA from IIM, for example, opens doors in most of India. But in the publishing industry, it is not necessarily respected. We are thought of, unfairly, as moneyed pests peddling low-brow ‘alumni fiction’ of doubtful literary merit. Unjust this may be, but I recognised that if I had to be part of another industry, I had to appreciate and understand how they worked.

I realised that my earlier education at Cathedral & John Cannon School and St Xavier’s College in Mumbai were better passports. I changed my introduction speech. That made a difference. People were at least willing to look at my manuscript now.

I got some positive reviews from a few celebrities like Anil Dharker, Prahlad Kakkar and Devdutt Pattanaik (God bless them!). Their endorsement impressed a publishing agent who decided to represent my book. I thought this was going well. That we’d soon have a publisher. That I may actually get people from outside my immediate circle to read my thoughts. Little did I know!

My agent, Anuj, sent my manuscript to many publishers (I stopped counting after 20), both within India and abroad. He had once told me that if you put 20 people from the publishing industry in a room to discuss an issue, you’d probably get 21 opinions. But my manuscript created a rare sense of unanimity. The unvarying opinion across all the publishers that we sent it to was that my manuscript should remain in my laptop. And preferably deleted. I was told that nobody would be interested in reading my book. That I should give up plans of being an author.

When I was younger, I would have probably taken offence at these opinions and the manner in which they were expressed. Perhaps I would have got into arguments. I used to be very pushy and defensive about my ideas. But writing the book had changed me. I had become far more religious, calmer and willing to accept things. I was beginning to accept that I had done the best that I could for the book. And if it wasn’t meant to be, then it just wasn’t meant to be.

There was one ray of hope, though. My agent had promised me that if he didn’t sell my book to a publisher, he would publish it himself. Despite my shaky confidence in my manuscript (it’s difficult to be sure of yourself when an editor says that your story is rather pedestrian!), I decided to remind him of that agreement. To my surprise and despite the massive number of rejections we had received, he decided to honour his promise. Not only that, as a mark of faith in the book, he also decided to begin with a first print run of 5,000, against a normal print run of 3,000 copies for most debut authors.

With my agent taking a risk and investing in the printing, I decided to do all the marketing myself and invest my own money in it. I was lucky to have some great advisers from the corporate world and I was smart enough to listen to them. We came out with many innovative ideas, many of which had never been tried before in book marketing. I guess the fact that all my advisers had nothing to do with publishing and hence thought from an outsider-in perspective may have helped.

Upon my wife’s suggestion, we printed the first chapter of the book and displayed it at cash counters in stores and distributed it free, giving us unprecedented visibility. Two friends of mine, Atul Manjrekar and Abhijeet Powdwal, made a live-action trailer film with specially recorded music from Taufiq Qureshi. The trailer film helped market the book at a whole new level. Another friend, Rashmi Pusalkar, designed a book cover that managed the difficult task of balancing reality and fantasy. Many may be surprised to know that Rashmi had never designed a book cover before in her life. We aggressively targeted social media like Facebook and Twitter. I also decided to push distribution myself, making presentations to key national retail chains, making market visits in different cities to smaller retailers, following up on airport store displays, driving to local distributor offices directly, and taking the trouble to send update emails.

And the results? We hit the bestseller listings within a week of launch and were number one in many lists within a fortnight. My publisher had to reprint within the first week itself and we sold over 45,000 copies within the first 15 weeks of launch. We got some very positive reviews from the media, some of which have been printed in the new edition of the book. I’ve received reader feedback that has left me humbled—from people as young as 12 years old to as old as 82, and from almost every corner of India. Some people wrote in to say that they had discovered faith after reading the book, while others wrote that Lord Shiva was the ‘dude’ of all gods. Feedback has not just come in from Hindus, but from Muslims, Christians, Sikhs, Zoroastrians and Jews, amongst others, showing the deep secular spirit of India. The Immortals of Meluha has succeeded beyond my wildest imagination.

Recently, we decided to consider a transfer of the rights of the book to a larger publisher so as to take it to the next stage of development. Many publishers bid for it. We finally decided to go with Westland, a company that has been a distributing partner of the book since the beginning and has shown drive, enthusiasm and commitment towards the project. The Westland edition of The Immortals of Meluha was recently released at a function in Delhi, presided over by one of the men I’ve admired since my college days, Shashi Tharoor.

I still find it hard to believe that a book I was blessed with, out of Lord Shiva’s unexplained kindness to me, has grown so big. Open magazine asks me how it feels? It feels bloody good, yaar!

May Lord Shiva and the Holy Lake bless us all.