The Day of the Pawn

Gobind Sharma runs a dhaba in Gurgaon. But when the clock strikes four, he becomes a master chess player 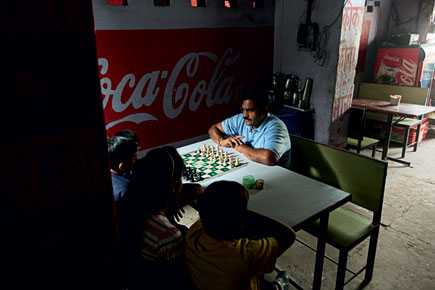 Gobind Sharma runs a dhaba in Gurgaon. But when the clock strikes four, he becomes a master chess player


For a man who leads a double life, Gobind Sharma doesn’t have a single striking anecdote to narrate. He’s never chopped a mound of onions on his chessboard. The bishop has never turned up in a kadhai (vessel) of dal fry. Never, he smiles with quiet satisfaction.  And yet, the absence of any such dramatic moment, you realise some days after meeting the polite, measured man, does not take anything away from his remarkable story. The life of Gobind Sharma, dhaba owner for 36 years, maker of flawless gulab jamuns and chess coach to rich kids in posh parts of Gurgaon, is astonishing just the way it is.

It began, implausibly enough, in an unfancy, lower middle-class residential colony of Gurgaon in the early 1970s. A couple of sarkari babus would sit around on charpoys, playing chess from four in the afternoon every day. “It was very unusual in those days to see people here play chess. I used to watch them simply out of interest, especially after my Class X exams when I had lots of free time,” he remembers. Sharma picked up his moves by observing them, though he didn’t realise what chess was doing to him till much later. Those days, he was seriously into hockey. He was good at the sport too, playing it at the district level till his college years. Chess was something of a special interest to him, enjoyed occasionally with his two closest friends—like the imported coffee you brew when friends come by.

Everything, pretty much, changed in college. Sharma had to move to Faridabad to study. He stayed in a rented room, alone, missing his friends, realising with a start that he also longed for that serious game that consumed them for hours. There was hockey, but scarcely enough time to play it. At the end of his first year of college, his parents got him married against his wishes. He was 17. For Sharma, a serious student keen on a career as a chartered accountant, it was enough to throw him into depression. “I wept. You have heard of girls crying at getting married, have you heard of a man who cried because he was forced into marriage?” he asks. “My mother told me she would not live to see me get married if I didn’t listen to her. I am 58 today, she is still alive.”

His first child was born before he graduated college. Chartered accountancy was out of the picture. He took a couple of bank exams but figured there really wasn’t enough time to wait for the results. The family had some land near their home in Gurgaon—he set up a dhaba there and went to work with his younger brother. It was the first time anyone in the family had got into business, and Sharma was quite clueless about how to run things. So he did what he could: worked from seven in the morning to ten at night, which was when the dhaba would close for the day. He kept books, waited tables, cooked, even learnt to make sweets. “I didn’t even know how to make tea in college, I used to buy it from the shop nearby. Now, I was making namkeen (snacks) and gulab jamuns. I could afford little help in those days. What this meant though was that I became a far better cook than my wife in a few years. All the neighbours would routinely request me to make jalebis and gulab jamuns for them. Eating gujiya at my home on Holi and laddoos on Diwali have became something of a neighbourhood ritual,” he says.

What this also meant was that he had no time at all for himself, for chess. The first six years of running the dhaba were especially exhausting. Sundays meant nothing. He had two more children by then; in addition, he helped finance the weddings of his sisters (two of them). When he got a hang somewhat of running the dhaba (they were now cooking for an average of a hundred people a day), a fourth child was on her way. “I am a victim of an early marriage. Responsibility after responsibility came my way, there was no escape,” he laughs. “How many men will say that?”

By the early 1980s, Sharma was resigned to the fact that he might never find a partner to play chess again. Instead, he decided to subscribe to an English newspaper, the first in his life. The Sunday edition of The Indian Express carried a chess column in those years, tracking the moves made in memorable games. Sharma started practising those moves himself, memorising the strategies for over a hundred such games. The dhaba had stabilised by then, and he would retire to a room (his home is behind the dhaba) after 4 o’clock, once the lunch crowd had gone. For more than a decade, he reckons, he played alone. “It was something to do with the mind, at least. I didn’t get a chance to work at a job of the mind. I needn’t have gone to college,” he says.

Then in 1992, he had a spot of luck. A chance conversation at an acquaintance’s place led to the discovery of two chess enthusiasts who stayed in Gurgaon. “Kismat entirely. I mentioned ‘checkmate’ with regard to something, and these two immediately asked whether I played chess. It was that uncommon in these parts to hear a regular chess phrase,” Sharma says. The three started meeting at his dhaba. The 4 o’clock sessions grew noisy and long.

In 1996, Sharma participated in the first chess tournament of his life: the Haryana State Chess Championships. He stood 13th, winning three games, drawing one and losing one. That, with his belligerent moves and his dhaba, made him something of a character on the state chess circuit. Haryana’s record at the sport in the nineties was almost abysmal; it is marginally better now (the state has its first International Master in Himanshu Sharma). Gobind Sharma’s unlikely story made him a figure to look up to, drawing many of the state’s players to his dhaba. The 4 o’clock sessions grew noisier still. And very, very long.

Sharma himself participated in a bunch of tournaments, doing reasonably well, though never particularly so. His aggression, he reckons, is his undoing. But his curious story continued to circulate. A chess culture began to take shape in Gurgaon in the noughties (as the decade of the 2000s is often called), drawing energy from the spirited sessions at Gobind Vaishno Dhaba. The Gurgaon District Chess Association came into being in 2000 with Sharma as a founder-member. It pushed hard for chess in the posh schools that had sprung up in the area, organising tournaments for children. It was a smart move. In exclusive, gated housing colonies with names like Kensington Gardens, parents want sophisticated pursuits for their kids. Chess is perfect. When some of them went scouting for a coach for their children, the association recommended the patient, affable Sharma of the often-dazzling aggressive moves. “His understanding of the game is very clear, and he’s good with explaining strategy, possibly because he taught himself everything by reading. We saw the work he put in with young players of the state at his dhaba, completely free of charge,” says DR Gulati, vice-president of the Gurgaon District Chess Association. It was an excellent choice. Besides, Sharma himself can’t have enough of playing the game, even if with five-year-olds. At last count, he had about 30 students.

In 2008, he was offered a job to teach chess at Salwan Public School. At 55, it was his first office job, the kind he needed to dress up for in the mornings. The kind he was so keen on in his college days. “I got a taste of a respected job. I never had to get ready to go to the dhaba,” he says. A couple of years later, sated, he gave it up. He had too many students to coach individually. A dhaba to run, not to mention, serving large batches of gulab jamuns from time to time.