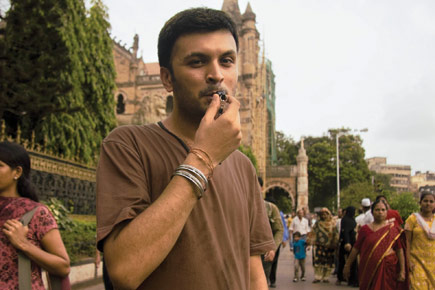 
I was seven years old when it started. I was at a relative’s home. His wife was also there. As always, he wanted to give me a bath. He soaped me to a rich lather and suddenly started playing with my penis. I didn’t know how to react, but didn’t mind it. I think it felt nice, though weird. He asked me to do the same to him and I obliged. He then asked me to suck his penis. I was repelled by it. He forced his penis into my mouth. I moved away and started crying loudly. He told me that he would kill me and everyone in his family if I didn’t shut up. He then asked me to suck his penis again and this time, I did it till he spurted on my face. There was a knock at the door then. It was his wife. “I will be back in a while,” she said from outside. He lifted and took me out. He pushed me on the cot, turned me around and then raped me. He continued to rape me for 11 more years.

All my childhood I lived a dual life—the life when I was being abused, and the life when I wasn’t. It dictated my very being. It was years of continuous abuse, years of pain, years of breach with not a single soul to reach out to. I bled from my anus often, and once did gather the courage to tell mom. And she thought it was because of the summer heat. I don’t blame her now. She was completely ignorant about the fact that male children are susceptible to sexual abuse and need to be protected. I became reserved though I did have friends—a tree that was beside my house, the chirping birds, the flies, the ants, the lizards, all were mine, and I loved them immensely. With them, I blabbered. Anything to be myself in.

At school, I never had a male friend until the eighth standard. I never trusted a man. I couldn’t understand the growing-up phenomenon. I wondered often why boys touch each other and speak, why they play the ‘beat the butt’ game… it was all distasteful for me. There was this experimental streak in them that I never could understand or relate to. I thought the girls were much more comfortable with their bodies. They discussed and spoke to each other about breasts and their undergarments. Boys lived in the realm of fantasy.

I never fantasised about men or women as I grew up. I was completely asexual. I was very body conscious. I thought my body was disfigured by constant abuse. I couldn’t bear to be seen from the rear. As a result, I would chicken out from anything that made me stand first in the row, showing my rear to the rest. My constrained body posture made me walk shaking my butt, which people thought was typically girlish.

When I shifted from school to college, I would get some fantasies about pleasurable sex with boys. But I thought this was because of my abuse and tried forcing my mind to think of girls. But the fact remains that until I reached college, I didn’t have a thought of a guy or a girl. No sexual fantasy whatsoever. Yes, my mind was replete with curious questions about anatomy and reproduction. But no sexual fantasy as such. I felt hatred and resentment towards anything that was masculine. I found it rather weird that I was getting these sexual thoughts about men and was dreaming about the very penises that I dreaded.

Meanwhile, in this battle of self-discovery, I confessed about my sexual abuse to a friend. Instead of keeping the confidence, he spread the news. Soon, the walls of the college and the toilet signboards had my name. They didn’t see it as sexual abuse. For them, it was fun gay sex. I became a symbol of ridicule. This was a time when I didn’t even know if I was gay or straight or whatever. But I got branded as gay, because ‘I had sex’ with my relative. I tried to commit suicide, but survived.

This was a time when I became friends with a dog named Jimmy. I used to lock myself in the room with him and cry out to him. The closer I got to Jimmy and confided in him, the stronger I felt. Even now, I was living two lives, the life in which I was being abused, and the life in which I was not. But the line dividing the two was diminishing. I became aware of what was happening to me. My problem was not that I faced pain during the abuse; it was that I felt nothing. I would lie like a log of wood. I was absolutely nihilistic. But now it was getting difficult, as I was gaining consciousness from my trance. I was understanding what pain feels like. Every day was getting worse, a thousand revolting voices rang in my mind.

One day, the revolution took definite form. My relative pounced on me, and I kicked him. My eyes were red and bloodshot, and I ground my teeth and said ‘NO’. A loud and clear ‘NO’. This is all that it took to end this ordeal. Once and forever.

Because of Jimmy, I started speaking up slowly for animal rights. I then started standing up for myself. And the slander campaign in college helped me because I had nothing to hide now. The college, in fact, helped as it saw a spark in me, and soon I was on stage performing and letting myself loose. I found recognition, and support, and decided to speak up. I make it a point now to speak about this taboo topic. Sadly, but not to my surprise, I have found many more boys open up to me in anonymity—the ‘sailing in the same boat’ syndrome. I help them as much as I can and later direct them to psychotherapists, though I don’t feel they follow up.

Meanwhile, I realised that I was getting attracted to men. I always thought it was because of abuse, but then I realised that when I was being abused, I never felt sexual. I did have sexual relations with a girl, consensual of course. And realised that I don’t feel for females sexually. I couldn’t marry a girl to just prove that I am not a result of my past. I finally realised that I was naturally gay. I ventured, I Googled—people in support groups like Gay Bombay helped me realise that there is a big gay world and being so was normal. My parents accepted me the way I am.

I am 30 now. It has taken me years to comprehend that I am not a remnant of my past. And that was when I stopped ‘growing from’ and started ‘growing into’. I have made a conscious decision to speak about child sexual abuse, because ignorance about sex abuse didn’t help me. And the one who wrote ‘ignorance is bliss’ had the dictum working for him. I cannot be him.