It was on a stolen trip to the cinema that he met his hero, Charlie Chaplin. And a chance encounter that got him the Cherry Blossom ad. So many years, so many gigs, yet he still isn’t done being Chaplin. 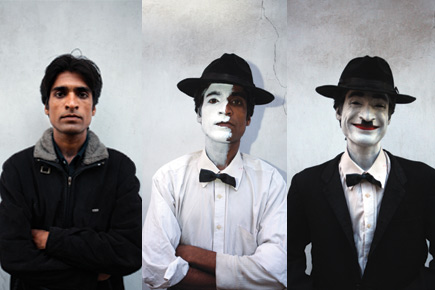 The journey that started with a stolen trip to the cinema isn’t over yet.


I am what I am because of my body. It is my temple. What it senses obtains me my vision of the world. And I’m at my best when I forget the world. Watch me and I twist into an arabesque. My toes on the ground, the rest of me is half-flight. I zip into a new shape that I myself don’t understand. I’m all action and no control. I love being in that state; it’s liberation for me. When I’m in the ‘zone’ twirling and twisting, my body becomes clay. Flesh forgetting shape, I form anthropomorphic angles.

When I’m performing in public, I have a thumb rule. I focus on a spot in the crowd and the world gives way, my head comes to rest on my right waist. My abdomen sinks in a seizure. I feel like a champion. People, mainly kids, see me and laugh. The world makes more sense when I perform one of my favourite tricks. I rotate my neck with my hat on and a steel ruler standing atop. The challenge is that the ruler shouldn’t fall. Usually, it doesn’t. Wisecracks would deem all this nonsense. That tomfoolery is my reason-to-be.

As you pause and gape, bone and body submerge in a moment’s defiance of gravity. Click goes a camera. It must be someone who’s spotted me before. In midsummer Delhi or monsoon Bombay or wintry Bangalore or sticky Calcutta or, maybe, even glitzy Dubai. For that person, I must have opened up a door into the past. He must have remembered that fellow in the Cherry Blossom boot polish ad long ago. They aren’t wrong. For the person they reckon I am, I am truly. As I’m in my act, I can see many faces that have seen my foundation-laced face before. All those irises become one giant eye, all that laughter one roar, all those oohs and aahs a single expression of wonder. When I’m in full flight, I am everywhere and I am everything. Human faces fade, and my insides are aflame. And before you know it, I’ve jumped over a chair and am romancing its edge. An angle like that is apt for introductions.

Namaskaar huzoor, I am Raju, but you can call me Charlie. If you’ve lived in Delhi for long, you would know me as Raju Charlie. If you’ve seen me perform more than once, there’s a chance you may know my real name. It is Mehtab Ahmed, and I am from Murshidabad in West Bengal. I owe everything in my life to the world’s greatest actor-performer-entertainer, Charlie Chaplin. My identity, my bread and butter, the boundless happiness in my life and the laughter I draw from others, I owe to that man. Chaplin is my guru. Like him, I had a tough apprenticeship into the world of public performance.

Growing up in the heyday of Jyoti Basu’s Bengal, my large family was a comfy cocoon one day and a bunghole the next. By Class VI, I knew studies and me were not meant to be. Around the time I was getting into the habit of nodding off at the local government school, I began working at the warehouse of our family’s leather business. Life was tough. Work made me feel like a coolie. One had to slap leather into shape, and working with it for six hours a day roughened your hands. Abbu Jaan, an uncle, was the master there. He had his heart in the right place, but he was very demanding (may his soul rest in peace). One day, on instinct, one of the boys mimed how a schoolteacher gave lessons in class. Another fellow, footballer Saeed, made a ditto imitation of our PT masterji. Studious Murad walked like our peon. We had forgotten all work. My turn came next. And I copied the way Abbu Jaan twirled his beard, spat paan and said, “Tauheen ke liye maafi chahtah hoon”. All these fellows roared with laughter as I did it. When I turned around, there was my uncle. I got the whacking of my life.

It was in that second that I felt I had a skill. A skill that I would turn into a passion. One day, one of the boys at school stole us into a cinema. If we were found out, our folks would paste us. I forget the name, but the film was in black-and-white and had no dialogue. A small fellow with large pants, big hat, torn pockets and a smile that just said everything was wrong came on screen. In the film, he gets drunk and enters a big machine and comes out alive at the same spot where he was before. People thumped in laughter. I didn’t realise it then, but I’d just met my hero: Charlie Chaplin.

When I got back home, I would mentally imitate his mannerisms. Though folks always griped that I was too thin, my body was supple. As a child, I could easily climb langdaa aam trees for the mangoes. Another time, I went to the circus. There I learnt to move like the clowns. But the one man who stayed in my head most of the time was Chaplin. I began escaping into the warehouse after all the workers had gone. I would do some kind of break-dance like turns and jumps. I was so crazy now that I started going to the circus often and saw that those people were a lot like Chaplin.

Seeing me do badly at school, my family started fretting. I decided to tell them all. I wanted to be an entertainer and didn’t want to work in the warehouse or study. Luckily, an uncle one day took us to Rahim Chacha, a family well-wisher who had friends who would perform mimicry and act on stage. I joined that group and got exposed to being on a public platform. But I wasn’t happy.

With the group, we did a play in Calcutta once. There was a mela on. Amid the stalls were some sundry entertainers. A friend suggested I do the Chaplin tricks I’d learnt. On a whim, I got into my act, changed my clothes and started to do my thing. I did sleight-of-hand tricks, leaps, jumps, the famous Charlie Chaplin coin trick (a 50 paisa goes down his pocket and comes out of his shirt) and the tightrope-like walk over a row of chairs. People loved it. I did the same for the remaining four-five days of the mela. In that crowd, an advertising professional, Shekhar Sir, saw me and I got a chance to do the Cherry Blossom ad. The rest has been the Almighty’s blessing.

After the ad, offers to perform at shows started pouring in. I had calls from film and TV serial producers in Bombay. I did small appearances in numerous Hindi films and got called for TV game shows on Zee, Sahara, Sony, Set Max and other channels. Soon, work took me abroad. Right through this, I kept on training and since I had no one to turn to, became my own teacher. I learnt I could not put on weight. I started fasting regularly and doing yoga. I avoid heavy food and keep intake of meat to a minimum. That’s because continuing with my passion depends on controlling the expansion of my abdomen. No two ways about it.

Being Charlie Chaplin is not easy. You get injured, and you’re out of work. Seven years ago, a little after my first son was born, I crash-landed from a chair while performing at Delhi’s Dilli Haat. I was out of work for a month. There’s no insurance or back-up in my line. I then decided to cut out the risks and just do the amusing Chaplin antics, not acrobatics.

My own relatives used to wonder how I would take care of my family in an uncertain ‘line’ like mine. But I left that to the Almighty. From work on TV, I went on to perform at many five-star hotels all over India.

People ask me if there are others like me. Truth is, there aren’t. In our country, we don’t take good care of native artistes. I can tell you, I am what I am because of my love for what I do, dedication and luck. There are a handful of boys where I stay in Mehrauli in New Delhi who see there is meaning attached to imitating Chaplin and developing your own style while doing that. The risk involved in pursuing this full-time makes them hesitate. So there really isn’t much scope in becoming like me. I understand why some people would think I’m insane. But one thing I keep insisting is there’s decent money in mimicking Chaplin. The trick is to be genuinely driven by it. If you’re persistent and lucky, you may even make a living out of it. Entertainment television came as a boon to me, and others like me.

I thank Allah for having given me so much. Most beautiful of all is how hassle-free my work life is. My accoutrements for performance are simple. Black trousers, black coat, white shirt, black bowtie, black velvet hat and a very important thing: erasable white foundation. I can get ready to entertain you in a matter of minutes. Do give me that chance sometime huzoor. Till then, Khuda hafiz.