Is the role of the individual in history overestimated? 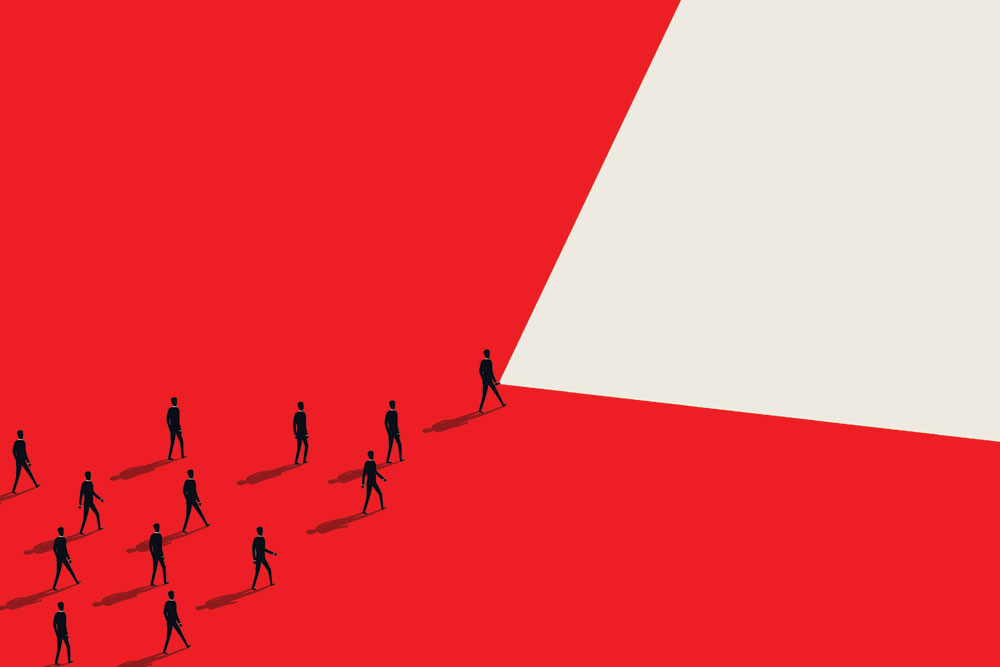 
IN BERTOLT BRECHT’S Life of Galileo, there is an exchange between the great astronomer and a student of his. The student, Andrea, remarks: “Unhappy the country without heroes!” The teacher is quick to respond: “No. Unhappy the country that needs them.” Is India now becoming one of Galileo’s unhappy countries?

Historians have long argued about how much difference leadership in politics can make. In the 19th century there was a famous debate over opposed ideas of heroic leadership described by Thomas Carlyle and Leo Tolstoy. Carlyle, in his On Heroes, Hero Worship and the Heroic in History (1841), argues that it is crucially important, whereas in War and Peace (1867), Tolstoy denies that heroic power is even possible. The two differed on whether the hero (the leader) can actually manage a high degree of mastery and control over the social and political circumstances in which he operates, or whether individual leaders are greatly limited by forces and constraints beyond their control.

Tolstoy argued that history shapes and determines leaders, whereas Carlyle thought it was the other way round. In his epilogue to War and Peace, Tolstoy described kings and generals as history’s slaves, riding the crests of historical waves beyond their comprehension, let alone control. “Every act of theirs, which appears to them an act of their own free will,” wrote Tolstoy, “is in an historical sense involuntary and is related to the whole cause of history and predestined from eternity.” It was a far cry from Carlyle’s view that “history is the biography of great men,” the greatest of them being kings.

Carlyle’s Great Man theory of leadership fell rapidly into disfavour. In 1898, Georgi Plekhanov published The Role of the Individual in History, articulating a sophisticated counterview. Like Tolstoy, he believed in large sweeping historical forces, but he granted individuals a role in epitomising, if not harnessing, them: “being conscious of the absolute inevitability of a given phenomenon can only increase the energy of a man who sympathises with it and who regards himself as one of the forces which called it into being,” he wrote. For Plekhanov, “every man of talent who actually appears, i.e. every man of talent who becomes a social force, is the product of social relations. Since this is the case, it is clear why talented people can, as we have said, change only individual features of events, but not their general trend; they are themselves the product of this trend; were it not for that trend they would never have crossed the threshold that divides the potential from the real.”

From this premise, though, Plekhanov ended up somewhere between Tolstoy and Carlyle: “The more or less slow changes in “economic conditions” periodically confront society with the necessity of more or less rapidly changing its institutions,” he wrote. “This change never takes place “by itself”; it always needs the intervention of men, who are thus confronted with great social problems. And it is those men who do more than others to facilitate the solution of these problems who are called great men. But solving a problem does not mean being only a “symbol” and a “sign” of the fact that it has been solved.”

In other words, social forces are determinant, but individual leaders have a vital part in seizing and directing them towards specific outcomes. During the 20th century, however, leftists and Marxist theoreticians have gone further in dismissing the role of the individual in history, arguing that the hero is merely the symbol of much larger historical currents that sweep through the world and shape human destiny. Some are even fond of quoting back to capitalists the classic observation of John Kenneth Galbraith half-a-century ago that changing the chief executives of important business corporations rarely affects their share prices on the market. (I am not sure if Galbraith’s theory holds up all that well today, but we’ll let that pass).


Even in 20th and 21st century democracies built on liberal constitutions, hemmed in by institutional checks and balances, individual leaders have emerged who turned out to be larger than the systems that produced them—and that failed to confine them

Still, you don’t have to be a Marxist to share a circumscribed view of the role of individual leaders. One of the Great Men of the 19th century, the “Iron Chancellor” who unified Germany, Bismarck, himself told the Reichstag in 1869: “we can neither ignore the history of the past nor create the future. I would like to warn you against the mistake that causes people to advance the hands of their clocks, thinking that thereby they are hastening the passage of time. My influence on the events I took advantage of is usually exaggerated; but it would never occur to anyone to demand that I should make history. I could not do that even in conjunction with you, although together, we could resist the whole world. We cannot make history: [instead] we must wait while it is being made. We will not make fruit ripen more quickly by subjecting it to the heat of a lamp; and if we pluck the fruit before it is ripe we will only prevent its growth and spoil it.”

Fast-forward to the present age. While the authors of management textbooks have no doubt that personal leadership qualities are essential to make effective and successful CEOs, historians are more divided on the indispensability of political leaders. The historian Eric Hobsbawm has observed that the individual hero has little place in countries “where political leaders are embedded in institutions which limit their power as individuals”, like Western democracies. As examples he points to the fact that most US presidents were often people of no great distinction, but “a strong economy and great power can be politically almost foolproof”. He favours “the force of structural explanations, which ‘emphasise what was likely to happen—on the whole, in the long run, in one guise or another’, irrespective of the intentions of the actors or their ability to carry them out.” 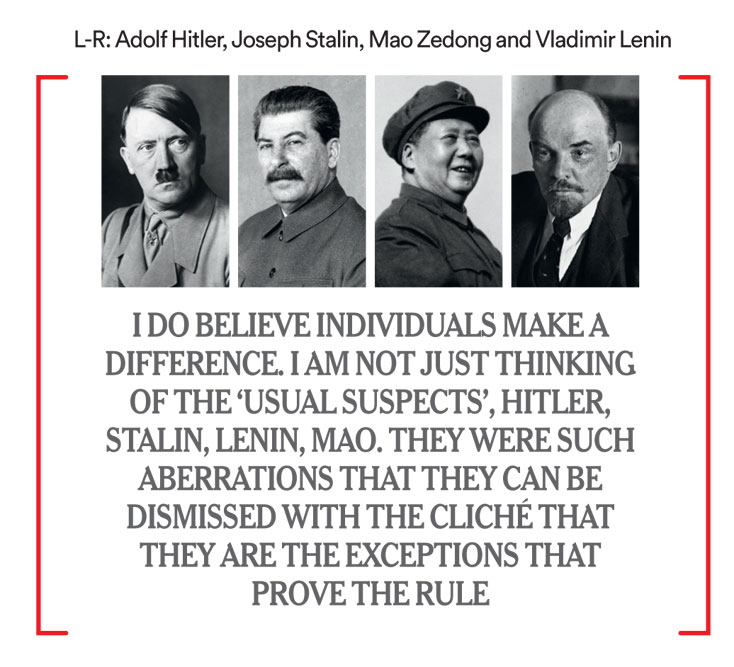 And yet, I am not so sure. I do believe individuals make a difference. And in saying this, I am not just thinking of the “usual suspects” of 20th century history, Hitler, Stalin, Lenin, Mao—all larger-than-life individuals who transformed their countries through the force of their own individual personalities, convictions and drive, rising above and shaping the social forces they embodied. They were such aberrations that they can be dismissed with the cliché that they are the exceptions that prove the rule. Instead, I would argue that even in modern 20th and 21st century democracies built on liberal constitutions, hemmed in by institutional checks and balances, a vigorous political opposition and a free press, individual leaders have emerged who turned out to be larger than the systems that produced them—and that failed to confine them.

After all, FDR (Franklin Delano Roosevelt) transformed the US, turning that bastion of individualism and free-enterprise into something remarkably like a welfare state. By winning four successive presidential elections—something no one had done before him and no one can in future, thanks to a subsequent constitutional amendment—he personalised the “New Deal” that remade America into a very different country from the one in which he first ascended to power.

There are other leaders in modern democracies who can be seen as greater than their systems. Winston Churchill’s outsize personality immortalised him as the lionhearted British bulldog standing defiantly astride the ramparts of Western civilisation. Donald Trump’s impulsive and unlettered mendacity showed Americans how fragile were the pillars of the republic they had erected. And Margaret Thatcher did a reverse-FDR in the UK, taking a welfare state down the path of supply-side economics and laissez-faire capitalism, dismantling the dominant union system that had stifled British economic growth in favour of distributive policies.

Such individuals can be larger than ideologies: even Thatcher, who presided over what Hobsbawm witheringly described as a “conglomerate of egoism, political servility and moral blindness,” moved the entire centre of her polity rightward, so that her party was ultimately defeated by a Labour Party that had made itself so unrecognisably centrist that it called itself “New Labour”. One could argue similarly that Ronald Reagan’s reinvention of the conventional wisdom about American capitalism produced, in Bill Clinton and Barack Obama, centrist alternatives who absorbed rather than repudiated their rivals’ policies. 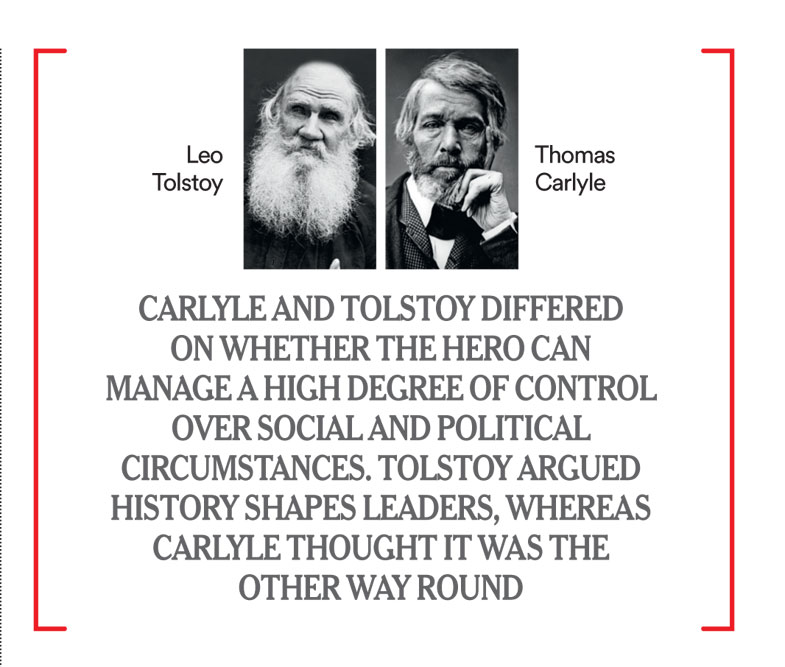 Many in India hailed Narendra Modi as such a transformative figure. He built upon the classic Hindutva message of his Bharatiya Janata Party (BJP) a personality cult that led to the concept of “Moditva”. Modi relished portraying himself as the hero on a white stallion, charging down with upraised sword, possessing all the answers, ready to cut through the Gordian Knot of the nation’s intractable problems. Every BJP election campaign in the smallest of Indian states was built around the towering personality of its leader. It was not a party or an ideology winning elections, it was an individual.

There is no doubt that Moditva’s spectacular failure on all fronts—demonetisation, the botched rollout of the Goods and Services Tax (GST), economic collapse, communal disharmony, the no-notice lockdown that triggered the migrant workers’ crisis, record unemployment, the mismanagement of Covid vaccination policy and many more—confirms yet again the limits to what untrammelled individual leadership can achieve. As popular revulsion mounts at Modi’s handling of the current Covid crisis, it is clear his vaunted 56-inch chest is not enough to save India.

Moditva apologists take refuge in the “TINA” theory—“There Is No Alternative.” But that offers scant consolation. Military historians often cite German Field Marshal Erwin Rommel as an example of a great general who was vanquished by enemies far inferior to him. His opponents enjoyed advantages that mattered more than Rommel’s leadership qualities—organisational strength, adequate resources and a cause that people could rally round. Modi is lucky that the first two are not yet available to his adversaries. But once they are, heroic leadership alone will not be enough to save him—or to sink India. Perhaps at that point, India will no longer be the unhappy country of Galileo’s fears.

Shashi Tharoor
Shashi Tharoor is a Congress MP. He is the author of, among other titles, The Struggle for India’s Soul: Nationalism and the Fate of Democracy and Ambedkar: A Life