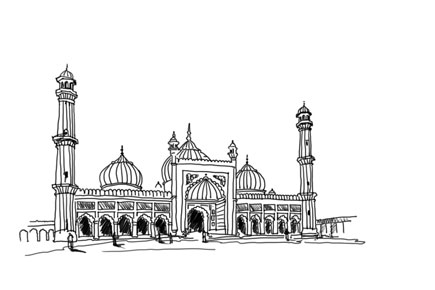 
It appears that the sole qualification needed to become the Shahi Imam of Delhi’s Jama Masjid is the privilege of geneology. This dis- qualifies more than 180 million Indian Muslims from becoming the imam of the historic mosque in Old Delhi. The tenets of Islam are irrelevant here; only ancestry matters. It is also an assault on the principles of democracy, modern civilisation’s antidote to the role of heredity in political life.

On 30 October, it emerged that the Jama Masjid’s Shahi Imam Syed Ahmed Bukhari had invited about 1,000 Islamic leaders from across the world to a ceremony scheduled on 22 November in Delhi to anoint his son Syed Shaban Bukhari, 19, as the Naib Imam, or deputy, who will assume the title of Shahi Imam one day. This is a lineage that can be traced to the mid-17th century when the Jama Masjid was built by Mughal Emperor Shah Jahan, who in search of purity could not find an imam in India and imported Syed Abdul Ghafoor Shah Bukhari from Bukhara in present- day Uzbekistan.

Indian Muslim groups are furious about being seen to be subjugated to this hereditary imamate that has no sanction in Islam. Opinions have been aired on how few Muslims in the country accept the Shahi Imam’s authority to speak for them. Yet, he leads prayers for thousands of Delhi’s Muslims, who offer namaaz behind him five times a day, and he has a large enough following to exercise an outsize influence on India’s political and spiritual life. Throughout history, imams have legitimised the coronation of kings, and they are sought for exactly the same purpose in modern times, most recently by Congress President Sonia Gandhi. Sometimes, imams also undermine the authority of rulers, notably in the case of Razia Sultan, the woman who ascended the Sultanate of Delhi in 1236 CE. So the imamate’s tradition of hereditary succession deserves close scrutiny.

In the Qur’an, the Arabic word for sperm, nutfa, occurs a dozen times. According to the Qur’anic verses 53: 45-46, Allah creates two mates—the male and the female— from a single drop of fluid. In the Qur’anic meaning, nutfa is a non-gendered concept.

The Bukhari family also has daughters. Assuming that the Shahi Imam would have brought them up with Islamic piety, it would have been a revolutionary act to anoint a daughter as the next Shahi Imam. Given that Delhi’s Jama Masjid is the country’s most prominent mosque and holds historical symbolism throughout the Islamic world, such an act would be in tune with the evolving ethos of Indian democracy. As understood by the Bukharis ever since Syed Abdul Ghafoor Shah Bukhari became the first Shahi Imam on 24 July 1656, however, a successor must always be male.

Geneology can assume a political role, as it has done throughout history. Numerous individuals have acquired power on its basis, sometimes even absolute power—as in Saudi Arabia or North Korea, for example. Back in the 7th century CE, Prophet Muhammad, whose sons died in childhood, is understood to have nominated his daughter Fatima’s husband Ali ibn Abi Talib as the Maula of Muslims, but the leadership succession was denied to him by politicians of the era led by Abu Bakr, who became the first caliph after the Prophet’s demise by outmanoeuvring his relatives, an event that heralded centuries of Shia-Sunni bloodshed that continues to torment Muslims in the Arab world and in Pakistan, where Shia Muslims—in favour of Ali’s succession—suffer persecution on a routine basis.

As part of the anointment ceremony, the Shahi Imam has planned a series of dinners: one for about 3,000 namaazis (those who offer prayers) in Delhi; a second one for hundreds of invited religious leaders; and then an exclusive banquet on 29 November for diplomats and politicians from India and abroad, mainly from the Islamic world. If this money were to be spent on cleaning up the surroundings of the Jama Masjid, it could help the country’s Swachh Bharat campaign. But the Shahi Imam has bigger things on his ideological mind; he has extended an invitation to Pakistani Prime Minister Nawaz Sharif and pointedly left India’s Prime Minister Narendra Modi off the invitation list, thus deliberately stirring a political controversy over the event, one that is particularly provocative since the latter was elected to power with a historic mandate.

“I have invited several Indian and foreign political leaders for attending the anointment ceremony of my son. Pakistan Prime Minister Nawaz Sharif has also been invited, but I have not sent invitation to Prime Minister Narendra Modi as Muslims have not forgiven him for the Gujarat riots,” the Shahi Imam roared, regardless of the fact that the Supreme Court of India has not found anything to implicate Modi for the same and that Indian Muslims are embracing him. Not only has the Shahi Imam taken it upon himself to speak for millions of Indian Muslims, deeming their consent unnecessary, he has also made a spectacle of insulting India’s Prime Minister.

Modi, a former chaiwalla who has more or less buried hereditary political parties in India and is on his way to turn his Bharatiya Janata Party into the country’s most diverse political party, would anyway have been the last person to attend the Bukhari ceremony. Modi has better things to do: clean our streets, improve the lives of millions of our poor and perhaps attend the wedding ceremony of Bollywood heartthrob Salman Khan’s sister.

Bukhari’s invitation to Nawaz Sharif gives traction to the argument that secularism in India is viewed too often as a function of the country’s kinship with Pakistan. The Shahi Imamate is a relic from the Mughal era; and as an anti-national force, has blatantly chosen to harm Hindu-Muslim relations and the cohesion of India. This is anti-people.

For Indian Muslims, the Shahi Imamate is now worrying. Husain Dalwai, a member of Indian Parliament, has criticised the Shahi Imam, saying there is “no succession act in Islam” and it is “not necessary” that the son of a king should succeed him. Social activist Gyas Qureshi has made a categorical demand: “End the title Shahi Imam as the country is now a democracy, not a Mughal domain.”

There are examples of monarchies being reformed in accord- ance with the changing times. Britain, for instance, rewrote its succession rules recently to ensure that even a first-born girl child could ascend the throne. In April 2013, Her Majesty Queen Elizabeth II signed the Succession to the Crown Act, ending a 300-year-old practice of the first-born male being the royal heir.

Syed Shaban Bukhari, a student of a politically meaningful subject like Social Work at Amity University who will succeed his father to be the 14th Shahi Imam, was born in an India free of colonial rule. Assuming that he reads newspapers and comprehends how modern democracies work, he has a historic opportunity thrown his way: he could renounce the imamate and become a social reformer, perhaps one of the greatest Muslim modernisers since Sir Syed Ahmad Khan (1817-1898). In 1936, Edward VIII of England, also the Emperor of India, renounced his throne and the claims of his descendants in order to marry his love. Likewise, a conscientious act by Syed Shaban Bukhari to end the imamate could hold lasting significance for the Islamic world, even set off a wave of modern thinking.

Given that most Muslim organisations outside the city of Old Delhi are opposed to this relic of the Mughal era, the Indian Government would gain support across the country if it were to throw its weight against a hereditary imamate. The Rashtriya Swayamsevak Sangh, which loves to earn social opprobrium for raising divisive issues, could uphold this as a cause that enjoys Muslim approval in large numbers, and demand that Indian Muslims be relieved of the power of nutfa.

In the Qur’anic meaning, nutfa has an additional connotation: Adam, the first man, was also the first prophet. In that sense, every human being on earth is a prophet with the power to use one’s thoughts and actions as tools of human liberty and social progress. This is a lesson every Muslim youth must learn. Some, like Benazir Suraiya of Bhopal who turned out to campaign for a vegetarian Eid Al-Adha, are already agents of change in India.

Indian Muslims are fortunate to live in a flourishing democracy, but they need to embrace it more wholeheartedly. They need to free their lives of archaic social, legal and historical norms and institutions—such as the Shahi Imamate. As per a 2005 High Court order, the Jama Masjid is the property of the Delhi Waqf Board and the Shahi Imam is its employee; he should be fired from his job for transferring his job as imam purely on the basis of nutfa. As the institutions of Indian democracy strengthen, the need of the hour is to dislodge the Bukhari family from the pulpit and reclaim the Jama Masjid, a historical monument of global importance, for the Indian masses.