A Portrait of the Statesman as Reconciler

Bharat Ratna or not, Atal Bihari Vajpayee matters more in the age of Narendra Modi 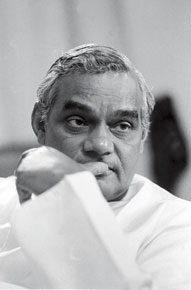 Bharat Ratna or not, Atal Bihari Vajpayee matters more in the age of Narendra Modi


Till this day, I remember rather vividly that encounter with Atal Bihari Vajpayee. It was a day after 15 August 2001. I was in Parliament House, taking around a visiting senior colleague from The Hindu, Chennai. As it happened, Mr Vajpayee was just coming out of the Conference Room (No 12) and was making his way to the Prime Minister’s Room (No 10). The ubiquitous SPG phalanx demanded of everyone around to hold their places; just at that moment, Mr Vajpayee looked at me, acknowledged my greetings and beckoned me to approach him. I introduced my visiting colleague, he characteristically came up with a pleasant quip; and, then, asked me, with that touch of admonition and indulgence that his age and office entitled him, why I had disapprovingly noted in that morning’s despatch on his Independence Day speech that he was reading out a written text. When I mumbled some explanation, he noted with asperity: “On such occasions, one has to weigh one’s words.” And, then, he walked away, leaving me appropriately chastened.

A few days later, I asked Brajesh Mishra, his alter ego and principal secretary, why Mr Vajpayee seemed unhappy about one line in the seventh paragraph of The Hindu report; after all, he was the man with a golden voice who had thrilled, moved and motivated a whole generation of Indians by his sheer oratory, and now he had chosen to read out a national address from a prepared speech. Brajesh Mishra was a man of experience and patience, and he explained: “What Mr Vajpayee was perhaps trying to tell you was that now that he was Prime Minister, he no longer had the luxury of saying whatever came to him mind. He had an obligation to measure his words.”

It was a remarkable lesson in the requirements of leadership— the obligation of restraint and reasonableness. As Prime Minister, Vajpayee had an almost Nehruvian approach to what it takes to run this country. Like Nehru, Vajpayee understood how difficult it was to maintain, leave alone impose, any kind of order on this complex and complicated land, and that wisdom demanded an approach of accommodation and reconciliation.

Vajpayee understood very clearly that even though he had become Prime Minister after a free-and-fair election, it would be presumptuous on his part to think that he commanded the support of the vast majority in the country. Yet he understood, with clarity and conviction, that he would be the Prime Minister of all people, and it was his obligation to try to win the confidence and respect of all sections of our society. And, this was the only—and a wise—approach. As the ruler of a country that had gained statehood after centuries of internal discord and disunity, he was always mindful of our painfully incomplete journey of nationhood.

A statesman is one who breaks out of the bitterness and animosities of the past, and cultivates, instead, a new crop of positive, purposive solidarity and joyful togetherness. Robust statecraft would enjoin a Prime Minister to pursue reconciliation at home if India were to achieve its national greatness. But as Prime Minister, Vajpayee had a serious problem—the Sangh Parivar. Though he went along with the public posture that the Rashtriya Swayamsevak Sangh (RSS) was just a ‘cultural organisation’, he knew that the Nagpur brass constituted an ‘extra-constitutional authority’for the Bharatiya Janata Party.

Vajpayee understood only too well that the Nagpur crowd was never at ease with him, but he was prescient enough to calculate that the RSS brass had no choice in the matter because he alone, with his cultivated reputation for moderation and reasonableness, could be an acceptable prime ministerial face for the BJP’s allies as also for the nation. And he knew that the RSS busybodies would want to throw their weight around in his government. He showed remarkable political deftness in dealing with these meddlesome pracharaks. For example, at RSS instigation he did appoint LK Advani as Deputy Prime Minister, but then saw to it that his new deputy did not have a run of the place.

As Prime Minister, Vajpayee was a ‘system man,’ very much bound by the oath of his office; he was not one to be tempted by the megalomania that he could single-handedly provide solutions and answers to all our problems. He was fortunate enough to have two highly loyal and competent aides—Brajesh Mishra and Ashok Saikia—to convert the Prime Minister’s Office into an instrument of his policies and priorities. But he did not seek to transform the cabinet system of government into a prime ministerial arrangement.

Like Nehru, Vajpayee understood that the most prudent role for a Prime Minister was to provide, first, a wise leadership, and then demand performance and competence of his ministerial colleagues. It was because of this gentle-yet-firm approach that Vajpayee never felt the need to preen himself as Prime Minister. Yet, at no point was there any doubt in anybody’s mind—at home or abroad— that it was Vajpayee who had the last word on matters both internal and external.

Except once. That aberration came about in the aftermath of the horrible 2002 anti-Muslim violence in Gujarat. He was convinced that the massacre had badly damaged the nation’s democratic compact and the best long-term interests of the Indian state demanded that some kind of political penance must be extracted; he wanted Gujarat’s incumbent Chief Minister, Narendra Modi, to step down.

It was an audacious stand for Vajpayee to take, especially in the context of the day. Let us recall that it was a time that the Dick Cheney-George Bush regime in the United States was shoving a ‘Clash of Civilizations’ argument down every country’s throat; and, our Hindutva-infected elites were more than willing to enroll in the US-led Global War on Terror. Let us also remember that emotions in India were running high after the terror strike of 13 December 2001 on Parliament House just a few months earlier. The air was thick with anger and our nightly narrative reeked of ‘revenge’.

The BJP rejected the Prime Minister’s demand that the Gujarat Chief Minister be asked to step down. Vajpayee stood isolated within his own party as well as within his government. It was a very low point for him. It is not known whether he ever contemplated resigning, but what is known is that he lived to fight another battle another day.

Like a loyal party man, Vajpayee went along with the majority view; but this setback only emboldened him to try to defeat the very forces and ideas that had rallied behind Narendra Modi. Instead of allowing his own party to define and straightjacket his prime ministerial innings in Nagpur- baked prejudices, he re-scripted his brief—to try to seek reconciliation in South Asia. And he went about this business rather creatively. ‘Restraint’ and ‘reasonableness’ became his operative principles.

The new experiment in reconciliation almost got sabotaged when, on 14 May 2002, jihadi elements attacked an Army camp near Kaluchak, some 15 km south of Jammu, killing jawans’ wives and children. The Army and the nation were angry and wanted retaliation. It required tremendous courage to exercise restraint. Jaswant Singh, Vajpayee’s Foreign Minister at the time, captures the nation’s mood in his book, A Call to Honour (page 347): ‘The government, in such a near impossible situation, remained calm, it continued to counsel restraint. This was a very difficult time, painful even in a recalling of it. No doubt, however, that this restraint was yet another act of great courage and challenging statesmanship by Prime Minister Vajpayee.’

It was a testing time. The nation had to be steered away from a path of insanity and perpetual civil war. It was in those troubled months that Atal Bihari Vajpayee became ‘Vajpayean’. He consecrated his wise leadership by a dogged determination to ensure that the polity did not get crippled by the wounds of the 2002 Gujarat violence; and he understood that the only way out of the RSS-VHP-Modi trap was to seek reconciliation. He operationalised his new thinking in the Jammu & Kashmir elections in September 2002, and later reached out to alienated Kashmiris with his eloquent invocation of ‘insaniyat’ vocabulary. And, then, eventually ended up travelling to Islamabad in January 2004 as part of an effort to write yet another essay in India’s détente with Pakistan. This was courageous leadership, wise politics, and smart realpolitik.

Like Nehru, Vajpayee understood that those who got the privilege of serving the Indian State could never succumb to pettiness or vindictiveness. When an authoritative history of his leadership gets penned, it would be shown how often he firmly put his foot down against witch-hunters and practitioners of revenge. A Prime Minister of India can spurn the virtues of decency and dignity only at his own expense—and at the expense of Mother India. Vajpayee never forgot this vital axiom. Above all, for him, pursuit of reconciliation became the finest and abiding virtue in creative statecraft. And, that is why even his critics and political rivals unhesitatingly honour him with that fine moniker: ‘A Nehruvian Statesman’.