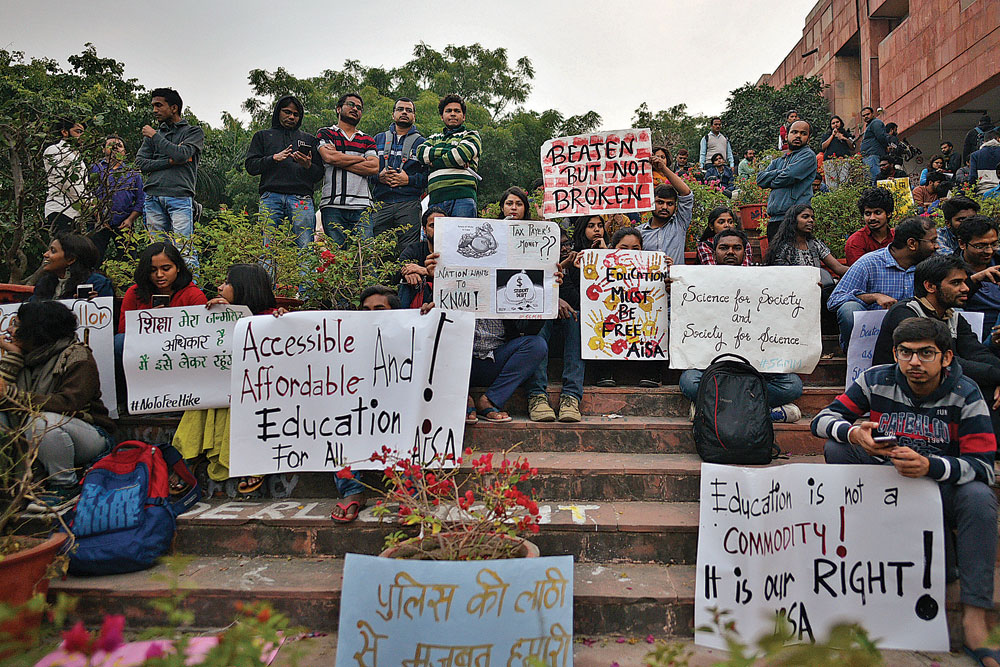 
India’s youth are going through unstable times. Whether they like it or not, they have become politicised. As we know, the tendentious and unconstitutional violation of rights and side-lining of one community has brought big and diverse sections of society on to the streets against the Citizenship (Amendment) Act, National Register for Citizens and the National Population Register. Some protesters have admitted they voted for Narendra Modi at least once. But it’s equally true that the eruption has happened due to a confidence-crushing economy.

While young and old Indians confabulate about their present and future and publicly read the Preamble to the Indian Constitution, they may have no choice but to undertake a detailed appraisal of their presence on earth as human beings and as residents of the nation-state called India. In all this, an issue that was always present but pushed to the edge of our vision, stares at us now with vengeful force in this inflamed era. Collectively, Indians have abnegated from examining a slew of matters that require unwavering stocktaking. Now, their progeny may end up paying for it.

The protesters and non-protesters—for they are in denial of the larger predicament—in this time may need greater self-reflection into the philosophical foundations of who they are as citizens, and what their present and future mean. To a degree, they have grappled with key matters of their daily life, like communal violence; or there has been the forceful facing up to caste discrimination and a resounding resurfacing of the memory of Rohith Vemula; or, there has been the leadership of the protests navigated by women. Thus, religion, caste, gender, and economy— our perpetual fault-lines—have coalesced and congealed into citizen resistance. These show there is a churn within Indian society; a billion mutinies now. But there are profounder matters that are still missing. Those need a reckoning.

If life, as young Indians have experienced, is so hard already, what’s in store for the future? They are already fronting up to mass unemployment, under employment, exclusion on grounds of caste, gender, religion, ethnicity, sexual orientation and regional discrimination. If being young has meant such suffering, if subsisting itself such strife, is life even worthy of bringing more life into it?

This impasse calls into question assumptions about individual and social living, young India’s parents and ancestors took for granted: The continuation of the family line, for instance. The privations of the everyday were justified for bettering the future of their children. In a way, large parts of ‘traditional’ India (and the subcontinent) even today believe marriage, procreativity and progeny to be norms that are above reproach. That attitude will need altering on a mass scale in the coming years. Plagued with a shaky present and future, current day young India needs to ask: Do we even have the moral right to procreate in the future?

Exponential reproduction—not illegal as per law or unacceptable as per culture—got us to the figure of 1.3 billion. A big part of India lives in misery even in the 21st century. Despite the amount of proof that suggested a trying future when they were themselves young, contemporary India’s parental generation had unambiguous faith in procreation. For many reasons—like labour to look over land, property, business, the family trade, the familial profession—traditional societies like India justified the need for large families and many children. This included all manner of subcontinental peoples. It entailed the utter ransacking of women’s rights over their body and life choice. Securing the child’s future in a more humane and equal society and world, didn’t seem a serious matter. Our 1.3 billion population hasn’t resulted in a 1.3 billion constitutionally empowered citizenry.

Recent studies have shown that the total fertility rate in India is dipping. But that may not amount to much in the land of 1.3 billion. If they follow their parents, the protesting and non-protesting young will be rearing their own children in a country of set-in-stone inequality. Will it be fair to their children, if the parents themselves have gone through historic social pain? Unlike their parents, this era of young Indians, will not have the privileges of innocence or ignorance or the bowing to tradition to validate their personal parenthood.

Today’s young are uniquely poised to pose a question their forebears avoided asking of themselves: Should we bring children into a horrifying country and world? Isn’t reproduction an act of extreme selfishness, egotism, insensitivity? Historically, Indian women have had incremental biological or political rights in practice. Many of these factors and power inequalities between women and men resulted in our population spiralling and caused women’s exploitation. So, when one’s own existence as an individual has emerged from violence, is it just to perpetuate it further? For an extremely religious civilisation and society, India fails regularly on matters of public justice and morality.

From now on, being Indian must bear measurable human value. For that to transpire, there are many blights needing healing, and discomfiting realities, genuine resolving. So, a substantive pause on population, is critical. Obviously, unlike what happened in the past, it cannot and will not happen by diktat or fiat. It must come from within. It must be voluntary. It must arise from democratic and individual thought and discussion and debate. It will need an imaginative and radical humanisation of our consciousness, and tremendous deepening of democracy and women’s rights. Young India must force the State to deliver its rights unto them; and it will need a strong feminine imprint.

All these matters, perhaps, signal that we haven’t encountered one of the hard-to-fathom underpinnings anchoring the CAA-NRC-NPR mess. Even its worst critics may have to admit that the exercise is an utter throwaway of these intentions: Why are we a country of 1.3 billion? For if we are so many, how will India progress? It’s an indication of State helplessness: We are doing this, for we may be the largest democracy, but in truth, we are a failed nation-state that can’t even feed its own or provide them with the fundamentals of human dignity. So, we need to weed out the ‘illegal migrants’. The exercise is telling the individual: Why are you born? Why did your parents have so many children? Why did their parents have so many of their own? Why, why, why? Why are we so ungovernably many?

Young Indians—even the ones who are in support of the CAA-NRC-NPR—must know it’s a fork-in-the-road moment for them. If India had true growth and equality, none of this would have mattered. China got there by force, but Indians may take to the one-child (or no-child) policy due to circumstance, choice, democracy, individual will. For that, they will have to rebel against their parents to heal. And find a job. And find love. It’s going to be hard but is certainly not impossible.