In the 1860s, a young officer in the British army in India, called James Waterhouse, compiled one of the most astonishing photographic archives in the world. 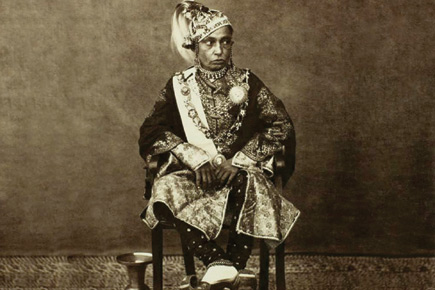 James Waterhouse, an officer in the British army in 1860s India, compiled an amazing photographic archive. A tribute.


In recent years, there has been an overwhelming response to photography in the Subcontinent. Writing, exhibiting and, indeed, probing varied strains of its existence in India has gradually revealed the complex and fascinating repertoire of material in both private hands and public archives.

The recent publication and forthcoming exhibition titled The Waterhouse Albums: Central Indian Provinces (edited by John Falconer) highlights an extraordinary figure from the vast repository of the Alkazi Collection of Photography. These images are not merely tools to awaken our sensibilities to history, but remnants that allow people access to a world of cultural exchange, often before the birth of many countries as independent nations.

This publication focuses on what is perhaps Waterhouse’s most coherent and intriguing body of work, produced during his early years as a young army officer, in the course of a year’s sustained photographic activity in Central India in 1862. John Falconer, editor of the volume and curator of the India Office Photo collections at the British Library, introduces Waterhouse thus: ‘It was at Meerut, in the north-west part of the present state of Uttar Pradesh and at that time the head-quarters of the Bengal Artillery, that Waterhouse acquired his first camera, ‘a half-plate set made of the good old French walnut wood, and, though it was not brass bound, it stood the hot dry climate wonderfully well.’ As an impecunious young officer with considerable financial constraints, Waterhouse’s early efforts were directed towards the calotype and waxed-paper processes.’

Waterhouse’s first major photographic work was undertaken over 1861–62. In June 1861, an official circular was issued under the authority of the Governor-General Lord Canning, ‘containing instructions for a collection being made of photographic likenesses of characteristic specimens of the more remarkable tribes in India’. Notes on the subjects photographed were also solicited for they were originally intended for transmission to the London International Exhibition of 1862.

During this period, he was also deputed to photograph rulers, tribes, communities and archaeological subjects in the Central Provinces. He took pains to complete his work, noting that, ‘Great care has been taken with the prints; fresh solutions have been used for each batch, and the prints have been most thoroughly washed.’ Perhaps the most intriguing stop on his tour was the court of the Begum of Bhopal, a female Muslim rulers. In a chapter on the history of the Begums, Shaharyar Khan mentions that Begum Qudsia was the first in this line, but was compelled to hand over governance to son-in-law, Jahangir. He soon banished his wife and mother-in-law to their jagir in Islamnagar, where Sikander, Qudsia’s daughter, gave birth to another daughter, Shahjehan. But Jahangir proved an unworthy ruler, and in 1844, the people of Bhopal unanimously welcomed back Qudsia and Sikander from exile. Sikander was in favour of recognising a Muslim’s woman’s legal right to rule a state. At this time, the British themselves were ruled by a queen, Victoria, and were obliged to acknowledge Jahangir’s young widow Sikander as the tenth ruler of Bhopal.

Shaharyar continues, ‘The Begum of Bhopal, Sikander Begum (ruled 1860-68), had a charismatic, Amazonian personality. She went tiger hunting, inspected her troops on parade and ruled with an iron hand. As observed a few years later by French traveler and photographer, Louis Rousellet in 1876: ‘The Begum is a woman of about 50 years of age. Her thin face, lighted up by a pair of intelligent eyes, expresses such a singular amount of energy that one must be aware of it beforehand in order to realize that a woman is standing before you. The costume itself aids the illusion: tight fitting pantaloons, an embroidered jacket, and a poniard at the belt, have, as a whole, anything but a feminine appearance. Her gestures and manners still less remind us of her sex; on the contrary, they reveal the sovereign and the autocrat accustomed to find everything yield to his powerful will, but I once add that this majestic haughtiness lasted only for a few minutes, and soon gave way to a gracious and winning affability. It may be said that the Begum Sikander is, in every respect, one of the most remarkable types that India has furnished us with in this century.’ ’

In a compelling chapter on sartorial conventions by Rosemary Crill from the V&A, London, Crill describes the begums as ‘wearing an elaborate embroidered and plumed hat and, like so many of Waterhouse’s subjects, apparently enjoying the photographic session. How Waterhouse arranged the photographing of Shah Jahan is unclear, since although a number of portraits were made, in one of his notes Waterhouse briefly mentions that her photograph was ‘taken in purdah, so I did not see her’. Presumably, the general arrangements for the photographs were made in her absence, possibly with a stand-in, and then Waterhouse either withdrew, leaving an assistant to make the actual exposure, or perhaps operated the camera himself, while concealed behind a curtain of some sort.’

Crill continues, ‘Waterhouse chose to depict not only the… ruling nobility of Bhopal and also Indore, in their magnificent robes and turbans, but also the merchants, administrators and clerks who worked for those elites, together with warriors, Marathas, Rajputs and bards, and… tribal and rural groups of the area. Both Hindu and Muslim subjects are shown, and the photographs also offer a rare opportunity to study female courtly dress of the period, with the flamboyant, wide-legged farshi paijama and the extravagantly embellished crowns and caps of the Begums of Bhopal…’

After his years in Central India, Waterhouse eventually became director of the photographic division in Calcutta. In his words, ‘The photographer thus stands, as it were, at a central point, with the sciences ranged around him on one side, and the graphic arts on the other. He need only take his choice in which direction to go. In all there is something for him to do.’

If by the end of his career Waterhouse had built up the Survey of India’s photographic section into a major department whose work encompassed a wide variety of subjects, we must remember that when he found this new department, it was barely in existence. Falconer writes: ‘For the first twenty years of its existence, the work of the department was divided between three dilapidated rented buildings on Wood and Carnac Streets. Waterhouse struggled for fifteen years to see new accommodation constructed which would be suitable for the needs of a major government department, but even in the midst of these bureaucratic wranglings, his department succeeded not in only producing an impressive out-turn of day-to-day work, but also in fostering a program of research into photographic processes which was of major international importance…. In fact, the range of work undertaken by Waterhouse’s office saw a huge expansion during the years in which he ran it… In 1868-69, the earliest period of Waterhouse’s work with the Survey… the office produced a little in excess of 50,000 maps from 271 different originals.’

But Falconer easily surmises his contribution in the opening chapter, stating, ‘After a career in the subcontinent spanning nearly four decades, James Waterhouse was internationally acknowledged as a figure of key significance in the development of photograph… the international reputation of the Photographic Department of the Survey of India, which by the 1890s was one of the largest such departments in the world, was due to his administrative energy and scientific knowledge; to the amateur members of the Photographic Society of India, he was, as their president, a fount of authority on all aspects of their pastime.’

(The author is curator, Alkazi Foundation for the Arts. An exhibition of photographs based on the book, The Waterhouse Albums: Central India Provinces, edited by John Falconer and published by Alkazi Collection of Photography and Mapin, will run at Shridharani Gallery, Triveni Kala Sangam, New Delhi from 18 December to 6 January.)