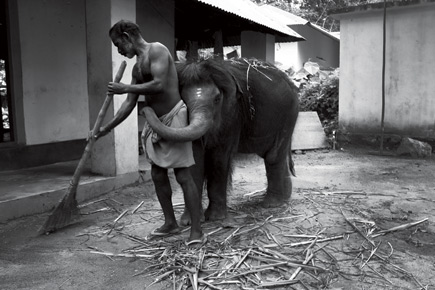 
Raja the elephant calf does not approach photographer Anand Shinde as you would expect a long-lost friend to. In fact, he walks past him hurriedly as the herd comes up from their daily bath at the Kottur Elephant Rehabilitation Centre near Thiruvananthapuram. Rana, the rowdy one, starts flapping his ears the minute he spots Anand from far away. Then he stops by him, while Anand says hello.

‘Animal Whisperer’ is a term that’s loosely thrown about for anyone who is able to communicate with another species. It implies magic, mystery and a bit of secrecy. When in reality, like all communication with someone of a different language, it is rooted instead in empathy, mimicry, patience and observation.

That’s what Anand will tell you if you ask him how he learnt to ‘speak’ to elephants. Anand’s journey started as a news photographer, posted to a land where he didn’t speak the language. In Kerala, the elephant is omnipresent; and one of the first assignments Anand had to cover was an elephant festival in Thrissur Pooram.

There he saw majestic, dressed-up elephants prodded by mahouts with sharp sticks, their ankles blistered and bleeding from the thick chains that weighed them down. Sometimes, an elephant snaps. That’s put down to ‘its unpredictable animal nature’, not to the fact that it may be in unbearable pain. The chaos of drums and musical instruments, too, might be too much to bear for an animal that can hear sounds as far as seven kilometres away; or the fact that male elephants are not used to and cannot be too close to each other in large numbers. Elephants have a matriarchal society, and if you gather more than three adult males together, their natural instinct is to feel threatened and assert dominance. Once you put all these factors together, it’s a wonder that there aren’t more stampedes.

The Malayalee relationship with elephants is ancient, symbolic and superficial. There are books with biographies of famous temple elephants. The ones with a particular shape of forehead (you must be able to make out the face of a cow), a trunk long enough to reach the ground and curl up, and a Manipuri dancer-like gait are sifted and enlisted for temple ‘service’. If you are wealthy, you own one and parade it at these festivals, much like a socialite carries a Chihuahua in a monogrammed purse. A child on a mama’s knee will insist on an elephant ride, not a horsey-ride. Elephant hair is even cast into a gold ring and worn for courage and strength.

But the relationship is one of aggression, violence and fear. “When an elephant is brought in,” explains a senior Kerala journalist who has covered this beat for years, “he is kept chained in a dark room. The senior mahout will stand in front of him and shout loudly. Four or five others will stand in the shadow around the elephant and rain blows with polished teak wooden clubs and chains. This continues until the elephant associates pain with the voice of the mahout and is conditioned to be submissive.”

It was this landscape that Shinde joined in April 2012, a photographer with no special empathy or love for animals. “I began spending time at the Kottur and Kodanand Elephant Training Centre to take pictures of the elephants there,” says the 35-year- old Mumbaikar. This resulted in the series Dialogue with Elephants, which won an honourable mention in the Best Photo Story category at the Media Foundation of India’s National Photography Contest in 2013.

Shinde’s unobtrusive, quiet observation reassured the elephants. They saw him as an unthreatening presence and he formed a close bond with Krishna and Ganga, two calves at the Kodanand Centre near Kochi. Calves separated from their herd have a lower chance of survival; without the security, nourishment, warmth and reassurance of the matriarchal herd, they do not learn to cope with the world.

Krishna developed a leg injury when he toppled while running down a slope to the river. Eventually, the leg grew weaker and couldn’t take his weight. Ganga, placed in a pen next to him, would urge him to get up if he lay down for too long on one side, understanding intuitively the strain it put on his organs.

Anand observed their behaviour and began mimicking their calls. They slowly began to understand each other. Krishna would playfully push Anand if he turned his back to him and wind his trunk around Anand’s arm when he started to leave. If the sky thundered, Krishna would grip his arm and not let go. “I began understanding how important it is for a calf to have an elder around it,” he says.

This deep attachment is what makes a mahout’s life isolated and lonely. Being a mahout is a hereditary profession and few changes have been made in its violent methods over time. Of course, there are some empathetic mahouts who truly love their charges, but there are more who are stuck in this profession because they have no other alternative. Once a calf bonds with a mahout, he follows him 24/7. They cannot be separated, which means a mahout can have no social life. They live in forest reserves or rehabilitation centres far from cities, and there is no promotion ‘up the ladder’. They are not part of the decision making, training or bureaucracy that surrounds the elephant industry, which creates a great socio-economic divide that is often filled with resentment. Alcohol is a popular refuge. Every once in a while, an expert is called in from abroad to deliver a talk on elephant conservation in English. Sometimes, certificates are distributed. Much is lost in translation and the event becomes an inside joke among mahouts.

Anand’s endeavour is to reform the handling of elephants by influencing their mahouts. He began sharing his observations on Radha, Krishna and other adult elephants with Jacob Alexander of Trivandrum Zoo. Alexander is a dedicated veterinarian who takes periodic pictures of Maheswari’s tail, Maheshwari being the resident elephant at the zoo. “It’s to threaten the handlers,” explains Alexander, “if I see the tail get less bushy, they will be in trouble.” He’s talking about hair depletion on account of the local tradition of wearing elephant hair as jewellery; since an elephant cannot twitch its back muscles, it needs a busy tail to fan or sweep away irritating insects.

Shinde would take his questions and observations to Alexander and the two would research elephant behaviour and try to implement changes. “Anand has found a positive way to communicate with the elephant by building a bond with it. If we can understand its behaviour and follow it better, we don’t need force to make it obey. We can have a peaceful co-existence and give it a better life,” says Alexander.

These changes would have been difficult to implement through the bureaucracy of the forest department were it not for the support of the then Chief Wildlife Warden V Gopinath, who now heads the Forest Force. Gopinath is genuinely interested in reforming these centres, which are a big tourist draw. He gave Shinde full access, and even encouraged him to address the Kerala Forestry Department on elephant behaviour last year. p>

It is under Gopinath’s sanction that a large enclosure is being built for calves Rana and Raja at the Kottur Centre. Krishna and Radha passed away last year while Shinde was visiting his family in Mumbai; it is a loss he is still coming to terms with. Raja and Rana are slowly helping him heal. Rana is an attention-seeking bully, while Raja is shy. They were kept fenced in by bamboo sticks in a small, enclosed area; now a large space with varied terrain and a water body is being created for them. “The variation in terrain helps develop their leg muscles as they climb over small bumps,” explains Shinde. “They take dust baths and are very playful. Rana’s company might help Raja assert himself and gain confidence. A large water body is [also] important so that they learn to spray themselves with water using their trunk. This is how they start gaining control of their trunk muscles.”

Shinde’s observations come across as common sense once he speaks; they are uncommon when you realise no one else has thought of something so elementary. For example, elephants love their daily scrub-down in the river; but Shinde would often see mahouts prodding them urgently to get into the water. “They were not reluctant; they were just adjusting their body to acclimatise themselves to the water temperature. Like we would while getting into a bath one foot at a time,” Shinde explains. This may not seem to be a big thing, but small irritations corrode a relationship and can push an ill or irritable elephant to snap.

Another endeavour is to enlist senior female elephants such as Minna or Jayashree for the the task of raising abandoned calves. Authorities are unsure of how an adult female elephant would react to a calf, but by advancing slowly, Shinde is sure this experiment will be a success. “If we could start by placing their pens together, bathing them together, we can judge whether there is antagonism or camaraderie,” he says. It shouldn’t be hard to do since elephants start exhibiting maternal instincts when they are as young as five. If centres are able to recreate the secure and caring matriarchal herd structure, calves will have a higher chance of survival and adults will lead happier and more fulfilling lives in captivity.

Shinde’s aim is to get mahouts, who already have traditional wisdom in this area, to treat their wards with due sensitivity. “We could also start an exchange programme where deserving mahouts visit conservation centres in Africa or Thailand and exchange knowledge. This would improve their self-worth, integrate them valuably with the existing bureaucracy, and in turn make them more excited about their work. It could also add value to the profession, and young mahouts would then have a reason to join [other than] compulsion,” Shinde says.

As one watches Shinde at the Kodanand Centre, it seems evident that elephants speak with him. Sunita starts flapping her ears when she sees him after a gap of eight or 10 months. He keeps his distance, mindful of tourists who might start taking liberties, but she keeps looking at him and is fidgety until he goes and talks to her.

At Kottur, Shinde is about the only human Raja is comfortable around. His earlier reluctance was on account of my presence—he has never seen a human female before. Now Raja is comfortable enough to wind his tongue around Shinde’s hand and take it into his mouth to chew. “He is teething,” explains Shinde, “and needs something to cut his teeth on.” Rana, jealous like any toddler, is trying to push Raja away so he can get his share of affection. But he is an elephant, albeit a small one, and risks mangling Shinde’s arm as he wedges himself between Shinde and Raja.

Shinde’s relationship with elephants may have started with a photography project, but now he’s in too deep. The trunk wrapped around his arm will not let him leave. 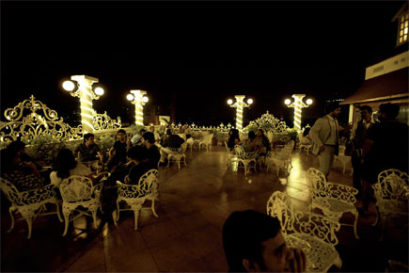