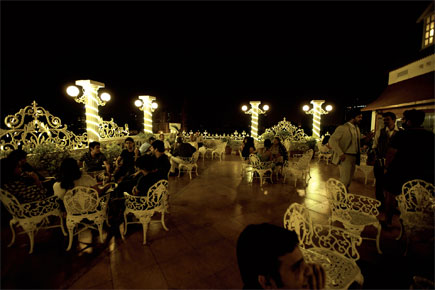 Parked on the ninth floor roof garden of an obscure mid-budget hotel off Colaba Causeway in Mumbai, Cloud 9 Café isn’t the casual tourist’s destination of choice. It’s not even the local’s destination of choice, really. They don’t play Miley, Justin or Bollywood, there’s no dance-floor, and, hell, I don’t think the place owns a radio. There are no upwardly mobile businessmen buying out the bar to impress young girls, and there’s no champagne to do that with anyway.

You get only two guarantees here: salted peanuts with your Blender’s Pride, and no conversations about fancy brunch or designer clothes. In short, Cloud 9 is a refuge up above one of the loudest, most obnoxious cities in the world. It’s my local dive bar, and I wouldn’t trade it for the Taj Mahal.

Definitions of what constitute a dive bar might vary, but I assure you that Cloud 9 fits the bill. Maybe it’s better to start by listing the qualities that dive bars don’t have: they lack what the media world regularly refers to as ‘buzz’. They lack catchy drink names and clean menus. They’re missing certain top shelf liquors. Dive bars ararely entice a society’s elites. We’re talking about the alcoholic version of a roadside dhaba here, or a car chase movie starring Jason Statham. Dive bars have no capacity for glamour.

Still, the right type of dive should have its own self-contained glamour. A bar I used to frequent in Manhattan, a legendary but now defunct hole called The Holiday Cocktail Lounge, had a brass Lowenbrau sign from the 1970s that looked like the Cullinan diamond when placed in the context of a basement with electric tape patching together the seats.

A definition pulled from a 1961 edition of Webster’s calls the dive a ‘disreputable resort for drinking and entertainment’. Three problems here: a) a good dive is ‘disreputable’ to only the exact type of pretentious clowns you’re going to dive bars to weed out, b) ‘resort’ implies an activity like swimming or skiing, but honestly speaking, we’re only getting drunk here, and c) the only ‘entertainment’ comes from you and the friends who help to lift your corpse into the back of a cab at the end of the night. Dives don’t hire comics. You don’t go there for a lap dance.

To me, a great dive is constructed of four basic elements: 1) conversation, or the ability to conduct one steadily at said location, 2) alcohol, served in as unfettered a manner as possible, 3) a marked unpretentiousness, particularly in the context of social standing, and finally, 4) eccentricity. It’s eccentricity that separates a great dive bar from just any dingy urinal with beer floating in it. And that’s what Cloud 9 has in spades.

Let’s start with The Godwin, the hotel that hosts the place. It’s difficult to discern the Godwin from other hotels on the strip. They all look the same. Same old dude, half asleep, working the night desk. Same heavily perfumed Saudi Arabian sisters wearing niqabs, reading Femina on an ugly vinyl couch. Same calendar highlighting Hindu holidays that passed three months ago. Same elevator too—it’s about the size of a closet where you’d expect to be thrown by a serial killer right before he does his business, and it smells about as good as the last person or primate who took a ride in it.

The bar itself is just an open terrace. It has the appearance of a place whose management did everything they could to make it slick and sexy back in 1999 when it opened and then abruptly gave up out of indifference. Today, the atmosphere feels as unplanned as the ridges of the Grand Canyon. The floor tiles are an earthy-reddish brown and the white metal furniture looks like it was swiped from a 76-year-old Englishwoman’s garden. White Christmas lights wrap around the edge of the terrace, snaking in and out of inexplicably placed white Greek pillars. In daylight, it looks like Zeus tore the roof off of a Greek restaurant and tossed what was left on top of a Mumbai hotel. But at night, the atmosphere takes on a more mysterious vibe, like an ancient opium den that serves grilled cheese sandwiches.

Maybe the best attraction of any dive is its staff, and Lobo, who only goes by one name, is the Mozart of bartenders. He’s a tall, skinny chap with an upper echelon Bombay moustache and a uniform that looks like something you’d have seen on a bellhop back in the early 1930s. He memorises the drink and food orders of his regulars and never forgets a face. If you’re the only people in the bar, he’ll keep it open for you beyond closing. He knows this is a hot weather city, and freezes the beer to keep it extra cold. He’ll give you a slice of cucumber with your gin and tonic and refill your peanut bowl before you even know they’re gone. It’s as if he were blessed with some kind of sixth sense that only applies to drunks.

Friends who have left Mumbai to work elsewhere always ask me about Lobo. They miss him like he’s family. His polite efficiency inspires confidence in his clientele, and, coupled with the gentle inscrutability of his face, lends him an ethereal, almost spirit- like quality, as if he only appears when you appear, or sleeps under the floorboards of the bar waiting for you to arrive. A friend of mine who once visited me in Mumbai told me that Lobo appeared to him in a dream, offering him a drink in the confessional booth of a Catholic church. Another friend, who recently moved to Delhi, wants to fly him out to serve drinks on the rooftop of his new apartment building.

I asked Lobo what it was like to work in a bar, and he smiled and said it was “okay”, which was like saying life in general was just okay because he’s worked in one his entire adult life. He was 20 when The Godwin hired him in 1992. He had been ringing doorbells looking for work when the owner tossed him that chequered uniform. He had never tended bar or even drunk alcohol before, but he learnt the trade by customer demand, working a makeshift table down in the lobby. In 1999, The Godwin gave the new terrace bar a grand opening, called it Cloud 9, and moved Lobo upstairs to work the crowd.

At first, he says, people showed up in decent numbers. But in a trendy, disposable city like Mumbai, people eventually moved on to discotheques, lounges and other places I wouldn’t dare enter at age 34. Today, the bar sustains itself off of its die-hards—myself included—and the weird hotel guests that wander in. You might see a mix of a few writers on one table, and some overweight Frenchmen with sunburns at another, talking it up with some stoned old man in Vietnamese pajamas and Blind Willie sunglasses.

But maybe the most important feature of a great dive is a more intangible quality: stubbornness. Because for people who revere dives, it’s the stubbornness, the resolute unwillingness to change, that brings them back time and time again. Cloud 9 hasn’t made any upgrades in 15 years. It’s almost as if they don’t care. Once, during the 2011 World Cup, the owners begrudgingly added a TV so that people could watch cricket while they got wasted. The TV is still there, but matches play in silence. In a city where everything is about newness and ‘the now’, it is refreshing to know that at least one place will always be the same.