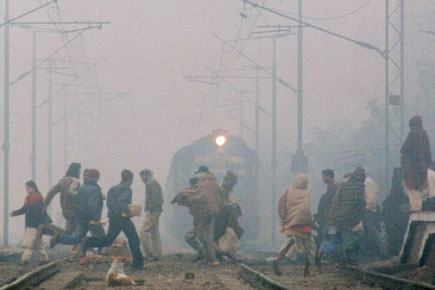 
‘How sterile is all human endeavour to pilot one’s own life.’

He, my grandfather, would sit in the verandah with a bottle of rum and listen to Loha Singh, a popular Bhojpuri series on All India Radio penned by Rameshwar Singh Kashyap about the adventures of a Sikh army veteran. He did this while waiting for the electricity to come back. There were other things he waited for—a gas connection, his pension and death. All this he wrote in his diaries, three of which I found when he died a decade ago.

Sometimes a visitor would arrive. A man, whom I addressed as the ‘old man’, would sit with my grandfather lamenting the plight of the country while they both, and million others across Bihar, waited for the next election to change something.

In that decade that he was waiting for death, he read Matthew Arnold’s Dover Beach many times over and wrote in his diaries. He wrote about the cold in Patna, the rains, the people, the telegrams he sent his sons. Most of all, he wrote about waiting.

If you grew up in Patna in the 1980s and 1990s like me, you’d know that there were too many things wrong with the city. All you could do was wait.

Power cuts lasted for hours and as we waited for electricity, Umesh, our domestic help, would tell us stories of ghosts in his village: witches, feet turned backwards, asking for jalebis, benign ghosts and vicious ones. Waiting was pleasurable. We almost looked forward to it. But I am still afraid of ghosts. I sleep with the lights on.

We were in no particular hurry to get anywhere in Patna. That’s what I got from my city. I can spend an eternity waiting and not complain.

We waited for my father to earn more, or for admissions, or for Lalu Prasad to be ousted from office, and for Bihar to be a lovely place to live in unlike the ‘stopover’ it had become in the great migration. Everything was delayed. Sessions in colleges ran late. I was forever planning my exit strategy.

Now, I am waiting to return. Again, there is no hurry.

Waiting was full of possibilities. We’d take the midday shuttle train from Patna to Arrah. It was only 60 km away but the journey took four hours with a halt at every station. Chain pulling was routine.

There wasn’t much to do in Patna. During summers, we’d pay Re 1 to be members of a day library from which we could borrow comics like Bankelal, Super Commando Dhruva and Nagraj, and spend the long vacations reading as we waited for school to reopen. We went to the botanical garden once a year for a picnic, and sometimes we’d go eat ice-cream at a fancy restaurant. I still love stories. I have learned to tell a few. But I wait for my mother to narrate how Lord Krishna suffered because he cheated in the great war of Mahabharata. Even gods have to make amends, she would say. I wait to hear that again.

Life was still. Even the river, which flowed past the city, assumed a lazy pace here. It lingered, reluctant to move on. I spent too many evenings watching the river flow.

Here, I was always planning my escape. Now, I come back to it looking for an anchor. I am always returning to Patna. It doesn’t mock me for running away. It is like a childhood lover, who stays back while you roam the world, cross mountains and rivers and cross them back. He is there. He is old, but he has been waiting. It is reassuring.

It is only in this city that I can sleep at 11 pm after my father has switched off the lights. As I lie in bed waiting for sleep to come, my bachelor uncle staggers into his room to drink his whisky with no company. I can see him from my room. He is old, weak and very very lonely. I want to ask him if he will forgive us all. But I never say anything. I wonder if anything has changed at all. He is waiting for the final farewell. While he waits, he drinks a lot. He has kidney problems. His lover is dead. They waited for everyone’s blessings for too long.

My room looks shrunken. So do my parents. And everyone else. But I am in a time warp. I have lived in different places. I tried to live in America. Not New York, or Boston, or San Francisco, but in small-town America, a nondescript city that lies in the rust belt. Everyone confused Utica with Ithaca. I bought a home theatre system and a black leather couch. On weekends, I went to the malls, did my laundry, baked brownies and watched reality television, and later hit the pubs like everyone else, and spent the Sundays running errands or just cooking a lot of food that I would later pack into the freezer.

I owned ugly snow shoes and down jackets. I checked the weather channel for warnings of storms and tornadoes. I couldn’t live there. With all its promises, it didn’t feel like home. It was full of refugees who were waiting to return home. But they had been assigned this country, and this city. In some refugee camp, they must have been cheered by others when the list showed their names against America.

I was in exile too. I had graduated from Syracuse University and The Observer-Dispatch in Utica had hired me as a reporter. On most evenings, holed up in my apartment as snow fell outside, I wrote poems about home. It was strange how much I remembered Patna. It was like I was carrying it with me everywhere.

Patna glitters in the night. I drive through it aimlessly. I try to reconstruct from beneath the glass and metal and the shimmer the places of my childhood, of my youth. I climb atop the Biscoman Tower, sit in the revolving restaurant and go around in circles, measuring the darkness against the lights. After all, we waited our entire childhood and youth for it to open.

I can smell the river. We are near it. The driver tells me it has shrunk, retreated by at least a kilometre. It makes me sad. I don’t live here anymore. But it should have continued to be what my memory holds of it.

As the restaurant starts moving, I look out on to Patna, and the darkness beyond it. I go around in circles, returning to the point of departure. Each year I returned, pushing my own perception of space, the city looked as if someone had chipped away at it. Emaciated, dull and shrunken.

Was I to revel in the news that malls had come up, restaurants were making money, and, a floor beneath, young men were sitting in leather couches and drinking their rum and Coke, or sipping their whiskies. It was no longer a curfewed city where streets would be deserted waiting for daylight to purge it of its shadows.

I am angry for the years that I lost to chaos and anarchy and kidnappings and everything else that was Bihar.

All that time I waited for Patna to be good again.

There is a peculiar smell when October begins there. Burnt wood, concrete, filth. I have tried to understand the smell, break it down, name its ingredients. It is a smell peculiar to my city. I have looked for it elsewhere. It doesn’t belong anywhere else. I wait to smell it again.

I was 22 years old when I eagerly boarded the train to Delhi to study information technology. I needed to get out. It didn’t matter what I studied. The need to escape was bigger than the one to make it anywhere in particular. But even now, there’s so much of my city within me that I often feel heavy with the weight of nostalgia.

I would always wonder what lay on the other side of the river. An island, an isolated patch of land where the poor lived, or just sand where the boat could take you. I am afraid of water. The last time I returned home, I asked the boatman to take me to the other side. It was dusk, and the bells of the temple were ringing. From some corner, the muezzin was calling the faithful for prayers.

He stopped the boat midway, lit a bidi and started to speak about politics. There we were, in the middle of the river, the sky a deep shade of blue. Neither of us was in a hurry. He wasn’t doing so well. But the government had started some welfare schemes and he was glad to be among the beneficiaries. He hadn’t thought of leaving ever. He knew the river and understood its moods. He could steer the boat, and it felt nice being on the water, waiting for customers, and waiting for a lot of other things to change. Maybe not in his lifetime. But certainly for his children.

I never quite understood this zeal for waiting. Like my mother, who put away crockery and other nice things, waiting for a special occasion to use them. Perhaps if you come from a place that went through an erosion of almost everything, you knew you had to wait for better days.

We were that generation that knew we had to go away. The city was a trap. Those trapped were people like my parents, who weren’t ambitious, who liked their afternoon siestas, and who didn’t want fancy cars or foreign vacations. Or, students who came from villages or towns to the city’s colleges to study. Streets near Patna University were lined with shabby hostels. The young men looked emaciated yet determined. They were waiting for opportunity.

I try to think of my city as divided between after I left and before I left. But I am forever straddling the middle space. But I am happy to wait now. Because it means not giving up.

I remember a photograph of a refugee sleeping at the Mohawk Valley Resource Center for Refugees in Utica. It was taken by Bosnian refugee Tatjana Kulalic. The caption of the photo described how refugees are always waiting for something.

“It hit me that you are always waiting,” a student had told me as I stood making sense of the photo.