About Science and Sex

Tired of the same old stuff about love and loss, migrants and displacement? Delve into Ian McEwan’s Solar and encounter the discomforts of making science interesting. 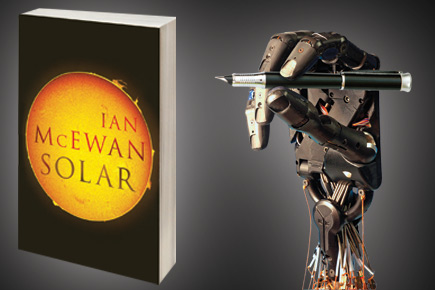 Delve into Ian McEwan’s Solar and encounter the discomforts of making science interesting.


Although it is an even number, there is a menacing presence to 2010. Its foreboding millennial ‘two’ and the melodramatic binary tail survey humanity with scientific self regard and with the brooding aloofness of a futuristic myth as if such a time is yet to arrive. Set against the conceit of 2010, the image of Mayawati or an Afghan peasant or a malnourished African child seems terribly erroneous. Modern literature appears even more obsolete—the same old stories about migrants and displacement, the trauma of love and separation, the suffocation of family, the entrapment of marriage, and the absurdity of magical realism in which a character is startled by a beautiful face while not surprised at all by the fact that he is actually flying or that a pig is talking. No matter how brilliantly written some of these tales are, they have a certain philosophical smallness, a narrow obsession with the psychiatry and culture of one species on just another dwarf planet.

It is true, the personality of 2010 is merely a figment of our imagination, the world in reality remains ancient and familiar, we were grossly overestimated by our forefathers for no fault of ours. Even so, it is hard to ignore that literature, which claims to represent all human preoccupations, must be so bereft of science. If you exclude rare works like Foucault’s Pendulum by Umberto Eco, and sci-fi (which is entertaining but still a farce, its science usually overrated), the truth is that the modern novel does not want the inconvenience of science. That is unfortunate. It is hard to make science interesting to all, but the attempt is important because the quest for the nature of reality is not just the business of writers anymore, but also physicists and mathematicians. That is why Ian McEwan’s Solar is exciting.

It is a clever, opportunistic novel that exploits the newsworthiness of climate change (previously known as global warming). An endearingly flawed Nobel laureate, Michael Beard, now lives his life in the afterglow of the famous prize he had won many years ago. And through the world’s comical alarm over the future of the temperature, Beard plans to return to scientific relevance.

McEwan fully understands that the surface beauty of science, when explained convincingly, leads to very ugly prose. I presume, when he was writing the novel he was always conscious of not antagonising his formidable base of female fans through the density of scientific explanation. In fact, McEwan once said, “When women stop reading, the novel will be dead.” So, in Solar, there is always an entanglement of diverse thoughts—at no point does it stray too far away from love, adultery, and a more nameless form of sex, and the decay of an old man. For instance, at the beginning of the novel, the destruction of Beard’s fifth marriage is embedded into the setting of the scientific premise of the story. It is the inextricable tangle of the two worlds—abstract science and real life—that results in these two lines appearing on the same page: ‘Quantum coherence in photosynthesis is nothing new…’ is soon followed by, ‘How long have you been fucking my wife?’

Also, when Beard gives a crucial 1,200-word long speech about the science of climate change, McEwan, fearing that it might bore us, tries to bring in some mirth by making Beard nauseous. So Beard delivers the entire dense speech trying hard not to puke, and the tension of the scene rests on the reader’s hope that Beard does not shame himself in front of the gathering of rich investors.

McEwan tries hard not to venture beyond popular science, the type of science that does not bore people. As a consequence, there is a frequent mention of the usual suspects that your mother would know, like Einstein and Hawking.

I read Solar with nervous interest because in my first novel, Serious Men, which is due in four weeks, one of the two central characters is an astrophysicist. Like McEwan’s Michael Beard, my Arvind Acharya pushes his own agenda, and is often startled by how easily the world grants respect to science when some of it is evidently bullshit. Acharya is at the heart of fierce scientific battles, he believes that the Big Bang is a Christian con, and he is very sure that mankind will never receive a radio signal from extraterrestrials. He is obsessed with his own way of finding aliens. To tell such a story without boring those who are not interested in science, I had to find ways, a scaffolding that I can now see very clearly in Solar.

It is not just McEwan’s technique that I find pleasingly familiar, it is also his inevitable artistic opposition to the extraordinary claims of science. Especially his cautious objection to quantum physics’ esoteric description of the universe as a place that stretches across ten dimensions (or eleven, depending on a technicality). It is ludicrous that such an absurdly extravagant view of the universe must be allowed so much respect and funds. So, McEwan, in the guise of Michael Beard, takes a literary stand and mutters that God is not as smart as theoretical physicists make him out to be. The mild satire on the mathematical philosophers of our times proceeds:

‘They had eventually seen the limitations of strings and embraced superstrings and seen heterotic string theory to arrive by these threads in the cavernous maternal shelter of M-theory.’

McEwan does not spare the literary types either, who read about things like Heisenberg’s Uncertainty Principle and try to extract a phoney philosophical meaning. For instance, Beard meets a novelist who says that the Uncertainty Principle is a reflection of the fact that one can never be morally certain, one cannot make absolute judgments. Beard insults the novelist through jargon. The novelist puts up a brave fight. But it is a no-contest.

In many ways, Beard is McEwan’s Trojan horse—the insider who helps the author demolish not just the many myths of science but also the insufferable devotees of climate change, the postmodern self righteous liberals, whose hearts are so fragile that they are wounded by so many things. In the punishing view of Beard, the climate change hysteria is a trauma that the Beautiful People immensely enjoy, a kind of festivity, another reinvention of the Woodstock festival.

To make fun of liberals, Solar goes beyond climate change, into a far more dangerous territory for a popular writer. In the course of a speech, Beard becomes Larry Summers—he carelessly states that there are not that many women in science because they are innately different from men. There is a huge backlash. Beard is shamed. In an enjoyable scene, when an indignant old woman flings a tomato at him, he catches it and throws it back at her (it hits her face and she crumbles to the ground, for which Beard is then handcuffed).

McEwan, even though he tries to be populist, does not always compromise the scientific strand. In parts, he bravely demands the reader try harder to understand his science. So the novel is particularly delightful to those who know enough about modern science to understand why this part is very funny:

‘…the string theorist caught in bed with another woman who exclaimed to his wife, “Darling I can explain everything.” ’

Manu Joseph’s first novel Serious Men will be released in June. It has also been translated into German, Dutch, French, Danish and Serbian.