When Boris Comes to Bharat

Still in search of a post-imperial purpose 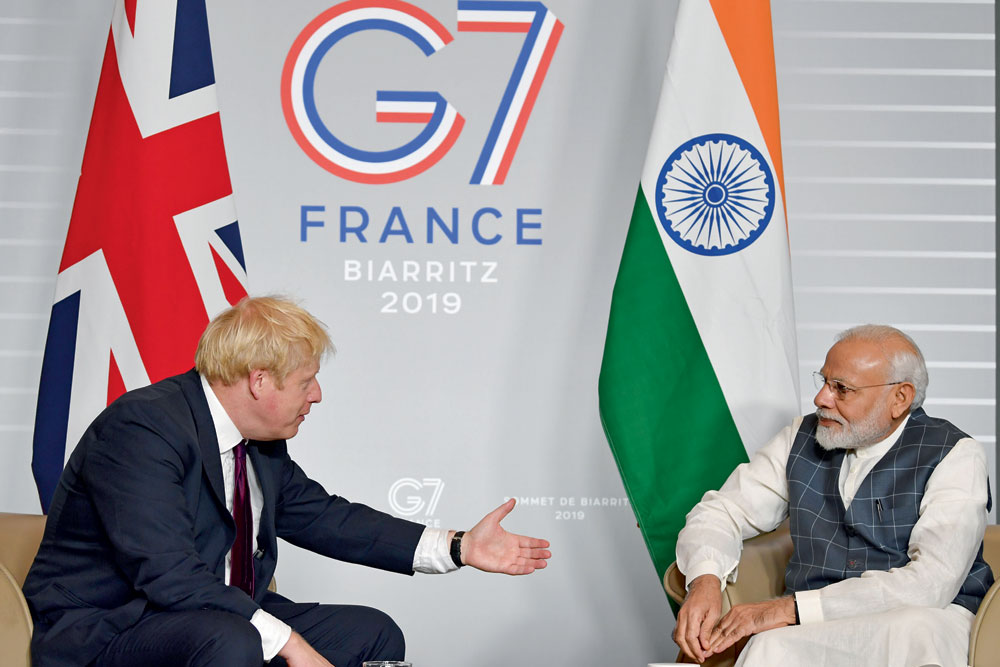 
MY ENGLISH FRIENDS wondered when Boris Johnson’s Republic Day visit to India fell through whether the real reason was that his messy private life would offend puritanical Hindus, while his divorce from the half-Sikh Marina Wheeler might deprive him of access to important centres of power. Both assumptions were based on idealistic stereotypes that could not be farther from the reality of a get-rich-quick, catch-as-catch-can, upward thrusting society on the make.

If and when the Johnson visit does materialise, India’s grandees will live up to Narendra Modi’s comment about “the slave mentality of 1,200 years” and let nothing stand in the way of fawning over a white pucca sahib from Eton and Balliol who even boasts of his Indian “family”. Proud legions of the topmost Indians who queue up to claim links through the divorced Wheeler will see no incongruity in the two very differently flamboyant prime ministers shoring up each other’s vanity with ostentatious hugs—social distancing permitting. The host is a Hindu ascetic. His guest is a blustering twice-divorced extrovert who has had two known mistresses and six children, two of them born out of wedlock. A Muslim Turk lurks somewhere in the ancestral shadows. Politics being the art of the impossible, they are probably already the best of friends.

That is just as well because with all respect to Atal Bihari Vajpayee, India and the US have too many fluctuating interests to be ‘natural allies’, even if the phrase were not a diplomatic oxymoron. The latest Indo-Russian announcement on arms production underlines the dissonance. India and a historically familiar middle-ranking UK should logically be closer. The UK’s recent 100-plus-page Global Britain in a Competitive Age: The Integrated Review of Security, Defence, Development and Foreign Policy almost suggests nostalgia for an era when it was joked that the three cardinal premises of British foreign policy were to hold India, to hold the sea lanes to India and the conviction that god was an Englishman.

However, the ‘Global Britain’ that the document exalts wasn’t Johnson’s idea. He stole it from Theresa May, the predecessor he manoeuvred out of office and who broached the concept in a speech in January 2017. It was a less grandiose project then, envisaging a free-trade agreement and ‘a far-reaching science and innovation pact’ with the European Union, trade pacts with non-EU countries and measures to exercise British soft power globally. Lady May (her husband was knighted) also threatened the Russians with cooperation on crime and terrorism. That was two months after she had visited India in an ingratiatingly draped sari and with a 33-strong delegation, boasting that the deals worth £1 billion she had clinched would create more than 1,300 jobs in Britain. But she turned down Modi’s plea for easier visas, probably seeing any entry relaxation for Indians as little more than one-way immigration tickets for people whom BJP’s economic mismanagement forces into exile. She delivered “very, very negative messages towards immigration”, the Parsi life peer and Cobra beer maker, Lord Bilimoria, who accompanied her told the BBC.


With all respect to Atal Bihari Vajpayee, India and the US have too many fluctuating interests to be ‘natural allies’, even if the phrase were not a diplomatic oxymoron. India and a historically familiar middle-ranking UK should logically be closer. The UK’s recent 100-plus-page report Global Britain in a Competitive Age almost suggests nostalgia for an era when it was joked that the three cardinal premises of British foreign policy were to hold India, to hold the sea lanes to India and the conviction that God was an Englishman

This recalcitrance on visas might be traced to Lady May’s six years as home secretary. That was when I first heard her name. The immigration officer at London’s Heathrow airport just could not get my wife’s fingerprints on one of our annual visits. Sumita blamed it on years of housework which, she said, had smoothed her fingers of all indentations. The immigration officer said his machine was defective. He knew we were all right and would have let us through if “that Theresa May” had not insisted on all the formalities being rigorously observed. It was whispered at London dinner parties that if Lady May did not actually incite immigration personnel to be offensive to Afro-Asian visitors, she turned a blind eye to it.

Anxious for international plaudits and not terrified by the spectre of a coffee-coloured Britain, Johnson might be more accommodating. He has appointed three ethnic Indians to senior cabinet positions, although one of them, Priti Patel, the present home secretary, does seem to revel in trying to out-May Lady May. ‘It’s a Priti disgraceful attitude on migrants’ punned a headline in the London tabloid Metro the other morning. But Johnson understands what a VS Naipaul character called India’s ‘craze for foreign’. He is eager to sell. He says his suitcase is packed with “clinkie” (whisky bottles) when he flies to India. “We have to bring Johnnie Walker. There is a duty of 150 per cent in India on imports of Scottish whisky. So we have to bring it in for our relatives duty-free. Imagine what we could do with a trade deal with India, which there will be, because then the tariffs would go.”

AN EXPANDED TRADE deal might spur the “greed” to which Johnson attributes the success of Britain’s rapid mass-vaccination campaign. But what really makes the Integrated Review attractive—at least in theory—is the return to a history which India shared. Kavalam Madhava Panikkar, the first scholar to argue that India and Southeast Asia are “connected integrally in their political, social and economic life”, might have inspired Clement Attlee’s instruction to Stafford Cripps to make assistance in defending the “South-east Asia area” a condition of India’s independence. Olaf Caroe of the Indian Civil Service, whose vision of the original Baghdad Pact envisaged India in the lead role, would have agreed that the Indo-Pacific is “the crucible for many of the most pressing global challenges”. Britain’s belated decision to return with “a greater and more persistent presence than any other European country” to a region it abandoned 50 years ago would have spared Lee Kuan Yew the trouble of rushing to Delhi in a futile attempt to persuade Indira Gandhi to send Indian warships “to intensify cooperation between the world’s democratic and technologically advanced nations” after Harold Wilson decided to withdraw from “east of Suez”.

Although the Integrated Review does seem appealing, and although Johnson speaks of disaster as opportunity, it is difficult to see a politician who stumbles from crisis to crisis resetting Britain’s geopolitical compass or seizing a historic opportunity to change the world. Johnson possibly dreams that a grand new roadmap will distract attention from a bruising Brexit and give the lie to Dean Acheson’s jibe about Britain losing an empire and not finding a role. But despite their success in organising nearly 32 million vaccinations, he and his colleagues are hardly visionaries. Their resources are limited. Their country is somewhat isolated. The document may suggest a historical grandeur but that is because of its historian author, John Bew of King’s College London.

Nor are all aspects of the Integrated Review equally welcome to the British public. Increasing the cap on Britain’s nuclear arsenal from 180 warheads to 260 seems inconsistent with the stated aim since 2010 of reducing the stockpile from 225. The justification that ‘in recognition of the evolving security environment, including the developing range of technological and doctrinal threats, this is no longer possible’ would have been more convincing if threat perceptions had been spelt out and adversaries identified.

The current spat over human rights violations may justify describing China as a ‘systemic challenge to our security, prosperity and values’ but the document also promises to ‘adapt to China’s growing impact on many aspects of our lives as it becomes more powerful in the world’. It speaks glowingly of ‘the rising power of China [that] is by far the most significant geopolitical factor in the world today’. That sounds like more business than usual. It could not be anything else. China has invested far too much in Britain’s infrastructure and strategic industries, the ever-increasing army of Chinese students brings in far too much money, and China accounts for far too large a share of British exports for a breach to be seriously contemplated.

I am indebted to the Anglican Archbishop of Canterbury (Justin Welby) and the Roman Catholic Archbishop of Westminster (Cardinal Vincent Nichols) for noting that the small print of the Integrated Review includes ‘a pledge to return the aid budget to 0.7 per cent of Gross National Income’. The two prelates find it ‘deeply worrying’ that this will be done only ‘when the fiscal situation allows’. They say that the promise has been made many times before and broken as often. The cut was the handiwork of Johnson’s Chancellor of the Exchequer Rishi Sunak, whose wife Akshata, daughter of NR Narayana Murthy of Infosys, is reportedly richer than Queen Elizabeth.

Boris Johnson says his suitcase is packed with ‘clinkie’ (whisky bottles) when he flies to India. ‘We have to bring Johnnie Walker. There is a duty of 150 per cent in India on imports of Scottish whisky. So we have to bring it in for our relatives duty-free. Imagine what we could do with a trade deal with India, which there will be, because then the tariffs would go’

The two archbishops remind us that Global Britain is not about national glory. It is about morality and redeeming a pledge to the poor. It is about the interdependence of nations and appreciating that the today of stricken countries like Yemen, Syria and South Sudan—their plight worsened by Sunak’s aid cut—could be the tomorrow of nations that are now sitting pretty. For ‘the pandemic has reminded us that no one is safe until we are all safe.’

That is one sombre lesson that cannot be ignored.

Another is the worldwide scattering of India’s talent. If Modi wants a roadmap like Johnson’s Integrated Review for his regime, he will have to tempt back scholars who have fled to the much more fruitful pastures of the West even while swearing undying loyalty to Bharat Mata. Seven of the nine speakers listed for the webinar on the West Bengal elections that SOAS University of London organised were expatriate academics. Finally, if Boris Johnson does come in April he might find a month o’ Sundays, as the old saying went.

With 15 holidays—Gudi Padwa, Ram Navami, the jayantis of Babu Jagjivan Ram and BR Ambedkar, Bohag Bihu and what have you—in a month of 30 days, India can hardly be called a working country. Britain’s prime minister can holiday with his holidaying hosts. 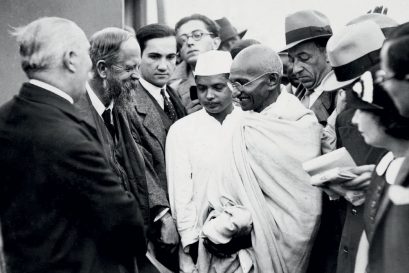