Why is it that many Supreme Court rulings go unimplemented in the South? 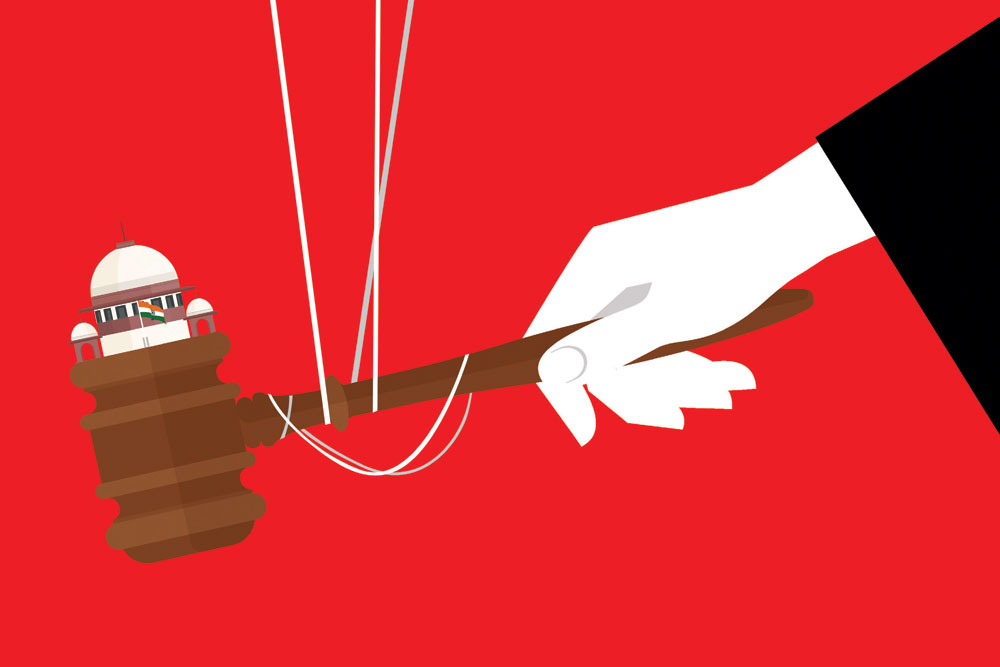 IT ALL STARTED in Karnataka. In 2007, the Cauvery Water Disputes Tribunal announced its ‘final verdict’, according to which Tamil Nadu would receive 419 billion cubic feet (or TMC) of water from the Cauvery, Karnataka 270 TMC, Kerala 30 TMC and Puducherry 7 TMC. In September 2012, then Prime Minister Manmohan Singh, who was also chairman of the Cauvery River Authority, ordered Karnataka to release 9,000 cusecs of water to Tamil Nadu daily. Karnataka refused, forcing Tamil Nadu to file a petition in the Supreme Court asking it to direct Karnataka to release the water. The Supreme Court blasted the Karnataka government for failing to comply with the orders of the Cauvery River Authority, and so Karnataka started releasing water. This led to widespread protests and violence in Karnataka, where vehicles from Tamil Nadu were burnt and people attacked. The apex court insisted that the release of water be continued, and the Prime Minister as chairman of the Authority was responsible for ensuring as much. Poor Manmohan Singh. This was beyond him, even with a Congress government in Karnataka. Karnataka, supported by both the Congress and BJP in the state, stopped all release of Cauvery water to Tamil Nadu. It was open defiance of the country’s highest legal authority.

In 2016, Tamil Nadu approached the Supreme Court for an order to Karnataka to release a little over 50 TMC Cauvery water for samba cultivation, as mandated bythe final order of the Cauvery Water Disputes Tribunal 2007. Again, Karnataka refused, arguing that there was only enough water for its own drinking purposes. Then, in September 2016, the apex court asked Karnataka to consider Tamil Nadu’s request on humanitarian grounds, and advised both states to maintain harmony. Violence broke out in Bengaluru, Mysore and Mandya. Two people were killed and Section 144 restrictions and a curfew were imposed. In a special session of the Karnataka Assembly, a resolution was passed not to release any water to Tamil Nadu, again defying the judiciary’s order. Finally, in 2018, the Supreme Court, bullied by a recalcitrant Karnataka, gave the state an additional share of 14.75 TMC of water per year while Tamil Nadu would get 14.75 TMC less than what was allotted by the tribunal in 2007.

The role of a court is to interpret the law and ensure justice. But what happens when the state itself violates a Supreme Court judgment and gets away with it? Who is to ensure that states obey the Supreme Court? Karnataka taught us that the highest court could be disobeyed. Tamil Nadu, observing its losses on account of this disobedience, sought revenge.

The year 2016 was a bad one for Tamil Nadu. Chief Minister Jayalalithaa fell ill in September, when arguments were going on in the Supreme Court for Cauvery water. She died on December 5th. The state drifted along with no governance. Then, Cyclone Vardah struck Chennai on December 12th, leaving it a mess. There was no government, no Cauvery water. When Pongal, a harvest festival, arrived on January 14th, 2017, there was little to celebrate. The religious part of Pongal is on January 14th and 15th. Thereafter, it is celebration time as people visit family and friends, and go out to the zoo, museum, cinema and so on. Vandalur Zoo and the museum were closed thanks to the ravages of Cyclone Vardah. So people converged on Marina Beach, the only open lung left in the city.

Judges apply constitutional principles to every case. But faith is abstract. Worshippers believe what they choose to believe

In 2011, the Ministry of Environment and Forests had banned the use of bulls as performing animals, thereby banning events using bulls such as jallikattu in Tamil Nadu. In 2014, the Supreme Court struck down the Tamil Nadu Regulation of Jallikattu Act of 2009. The court noted that any flouting of the ban should result in penalties for cruelty to animals under The Prevention of Cruelty to Animals Act, 1960. No jallikattu was conducted thereafter as long as Jayalalithaa lived.

On January 16th 2017, villagers of Alanganallur protested. Jallikattu took place in defiance of the Supreme Court ban. Meanwhile, several groups, organised via social media, assembled at Marina Beach in Chennai to challenge the ban on jallikattu, protesting against the Supreme Court’s inability to pressurise Karnataka on water sharing, protests that spread all over Tamil Nadu. After several days of government inaction, the Governor of Tamil Nadu issued an ordinance permitting jallikattu, which was later legalised when the state government passed a bill to amend the Prevention of Cruelty to Animals Act, with the acquiescence of the Prime Minister, exempting jallikattu from it. But, asks former minister and Congressman Salman Khurshid, can state laws overturn central laws and Supreme Court judgments? And who were behind these protests? According to mediapersons, it started with a few genuine students protesting the Cauvery problem, but was soon taken over by fringe groups such as the Sri Lankan Tamils, the Tamil Nadu Thowheed Jamat, and the rich and powerful breeders of jallikattu bulls. Many churches openly conducted mass prayers and rallies against the Supreme Court ruling. Disobedience of an apex court ruling had triumphed once again.

The latest is the Sabarimala case. By a 4:1 judgment, the Supreme Court ruled that not allowing women in their ‘menstruating years’ into the Sabarimala is a violation of constitutional guarantees, and all women should thus be allowed to enter. All hell broke loose. A vast number of Kerala women—highly educated and literate— objected. The state’s Marxist government made a drama out of letting women enter Sabarimala, with police in riot gear escorting women journalists. The Congress and BJP supported the ban in Kerala and the judgment in Delhi. Now Kerala’s government has gone back to the Honourable Justices to bail it out of a sticky situation.

I do not support a ban on menstruating women, but this change could have come about gradually. Why did the police have to escort women in colourful clothes into a temple where black is the rule? Women without irumudi on their heads? If they were genuine believers, they would have been appropriately attired—and waited. But these ‘activists’ were out for publicity, while media reporters were looking for a good story. Needless to say, no woman between the ages of 10 and 50 could go in.

The role of a court is to interpret the law and ensure justice. But what happens when the staff itself violates a Supreme Court judgment and gets away with it?

Which brings us to the question: should the Supreme Court be adjudicating in matters of faith? Every temple has its rituals and rules. In Kerala, men may not wear a shirt and must wear a dhoti. Neither is a requirement in neighbouring Tamil Nadu. I have visited Amman temples where men are not allowed to enter. The world’s largest all-women religious event is the annual Pongal festival at the Attukal Bhagavathi shrine in Thiruvananthapuram, where men cannot participate.

Judges apply constitutional principles to every case. But faith is abstract. Worshippers believe what they choose to believe, and who is anyone to object unless it is a totalitarian state like the Soviet Union, which banned all forms of religion? Anger is brewing in India’s southern states. Why are Hindu institutions alone targeted? Women cannot enter many mosques; why is Lutyens’ Delhi and the ‘left liberal’ lobby silent about this? ‘Leave our temples alone,’ is the cry.

One more case of opposition to a Supreme Court ruling is that of the murdered tigress Avni. put to death recently in Maharashtra. There was no credible proof that Avni had killed five (or 13) people who had gone deep into tiger territory. The court gave permission for the execution, even though environmentalists and scientists objected to the government’s averment that Avni was a man- eater. By the court’s notification, tranquilising the tiger was the first option, which the state government conveniently ignored. Now there are massive protests against the action.

Yet, when there is an issue like the Ram Janmabhoomi, which urgently needs legal intervention, the Supreme Court puts off a decision indefinitely. It calls it a land dispute. How will Hindus take that? Here again, it is faith versus the Supreme Court.

THE SABARIMALA PROTESTS should remind historians of another reform measure in the erstwhile state of Travancore, which saw mass protests and objections when the Temple Entry Proclamation was made in 1936.

In the 1930s, the condition of ‘depressed classes’ (as avarnas were then called) was so bad that nowhere in India had Christian missionaries succeeded so well in proselytising Hindus as in Travancore. From 20.6 per cent in 1891, the percentage of Christians in Travancore rose to 31.5 per cent in 1931. Simultaneously, the Hindu population fell from 73.2 per cent in 1891 to 61.6 per cent in 1931. CP Ramaswami Aiyar’s acceptance of the title of Diwan of Travancore was specifically on the condition that temples would be opened to ‘depressed classes’. Maharaja Chitra Tirunal accepted and CP took office on October 8th, 1936. His first administrative action as diwan was the promulgation of the Temple Entry proclamation on November 12th, 1936, by the maharaja. The public reaction was predictable: people bayed for CP’s blood and surrounded his home in Travancore, shouting nasty expletives. Surprisingly, both BR Ambedkar and Mahatma Gandhi condemned it too, the former stating that “because the Maharaja was vested with autocratic powers, he could, by an order, throw open the temples to untouchables”. Incredibly, even Mahatma Gandhi decried the proclamation as “a political document”. CP challenged the Mahatma to visit Travancore and see things personally to satisfy himself. Mahatma Gandhi accepted the challenge. However, the detailed telegram he received from the Harijan Sevak Sangh of Trivandrum dispelled the Mahatma’s fears and he had no hesitation in acknowledging: ‘Have I not known Sir CP Ramaswami Aiyar since 1915 or 1916 as a reformer?…It may be that it was my want of faith in the people.’

So how did the street protests stop? Firstly, the Maharaja, Maharani and CP were devout Hindus, so their credibility in reforming Hinduism was high. This is something an atheist communist government lacks in tackling a religious reform measure. Secondly, CP invited the revered saint-seer, Sri Chandrashekhara Bharati Mahaswami, Shankaracharya of Sringeri, to visit Sri Padmanabhaswamy Temple in Trivandrum. This mollified conservatives and the orthodoxy. Again, an atheist- communist government lacks the imagination to do something similar. Finally, the invitation to Gandhi was a masterstroke. Gandhi went on a hectic pilgrimage, visiting 24 temples, including 4 private ones, from January 12th to 27th, 1937. He exhorted people to support the proclamation, calling it a “smriti” and “an act of divinity”, and Mahadev Desai’s The Epic of Travancore was born. Who has the stature of a Mahatma Gandhi to travel around and convince people today? A few months later, the government of Travancore announced that the term ‘depressed classes’ would be replaced by ‘backward communities’.