Inside the Metoo Crucible

Can the accused be a victim too? 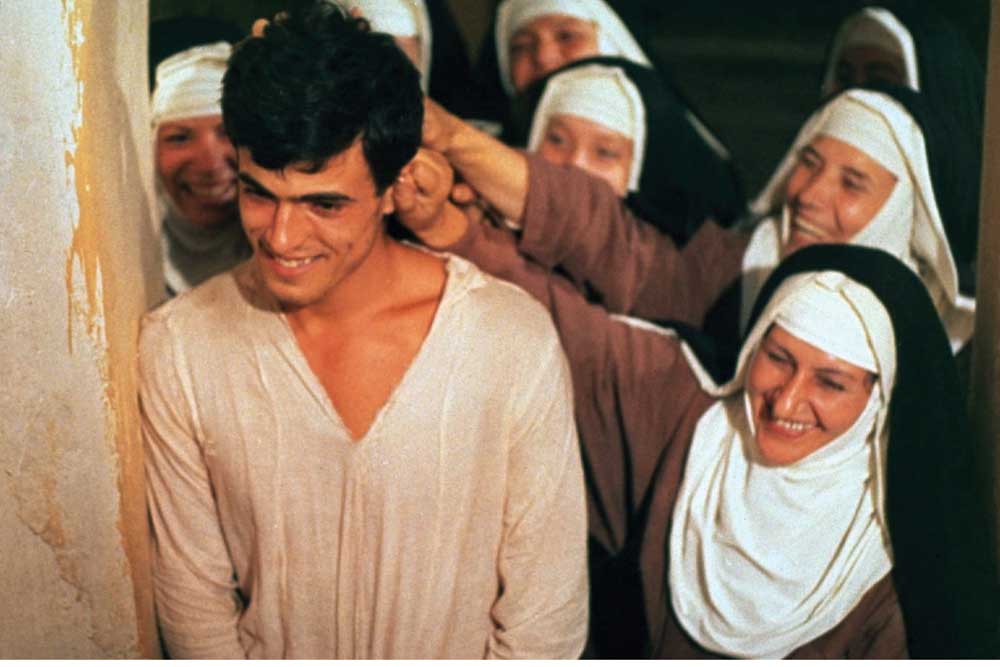 THE EXPLOSION OF what are called MeToo allegations made me think of Masetto, the lusty, good-looking young labourer masquerading as a deaf and dumb gardener in Boccaccio’s The Decameron. Would he be classed as victim or aggressor? If he was the victim, then the eight nuns and Abbess who enjoyed his services were the aggressors and he could sue them for a fortune, having them and their money too. It could also be the other way round. Much would depend on the lawyers the two sides hired, the witnesses they bought and the evidence they adduced if the matter came to court.

As it happened, a showdown was averted. When Masetto threatened to quit because ‘eight nuns and one Abbess are too much for one man’, the Abbess panicked, fearing he would talk and destroy their reputations. So she made him the abbey steward and worked out a schedule that enabled all nine women to continue to enjoy his favours without tiring him out. As Boccaccio records, Masetto remained there until he was an old man, ‘fathering many ‘nunlets and monklets’ in the process’. This triumph of pragmatism over principle offers an ideal precedent for a country where a record 186 members of the 14th Lok Sabha wouldn’t have faced criminal charges if morality had mattered more than money.

With a humongous 33 million cases gathering dust in India’s law courts, the Abbess and Masetto were wise to reach an out-of- court settlement. Litigation means delay, complications and corruption. FIRs are lost among millions of police station files. Many cases never come up for hearing. Many witnesses pick and choose the highest bidder. A businessman says that faced with a suit, he doesn’t waste money on engaging expensive counsel. He invests instead in his opponent’s lawyer. ‘The law is a ass … a idiot’ as Mr Bumble famously said.

Of course, no one disputes that complaints of sexual harassment must be taken seriously. Women who are courageous enough to go public with their sufferings demand admiration and deserve support. The challenge is to ensure justice for them without victimising the accused, encouraging further abuse of the legal process, or degrading a social climate that has been so “brutalised”, says Ashis Nandy, that a new generation is “growing up to become amoral machines of violence and death”.

Those who feel victimised by MeToo allegations should draw comfort from the knowledge that nobody accuses a nobody. Masetto might have been a nonentity, but the Abbess was by way of being a celebrity. One of the first weighty reputations to be targeted was that of a Supreme Court judge called AK Ganguly whom an intern accused in December 2013 of sexually harassing her at a New Delhi hotel. Following her blog, the chief justice set up a three-judge fact-finding panel which indicted Ganguly for an ‘act of unwelcome behaviour’ and ‘conduct of sexual nature’. But the Delhi Police said there wasn’t enough evidence to lodge an FIR, and the Union Home Ministry ruled in July 2014 that Ganguly had no case to answer.

As Boccaccio records, Masetto remained there until he was an old man, ‘Fathering many ‘nunlets and monklets’ in the process’. This triumph of pragmatism over principle offers an ideal precedent for a country where a record 186 members of the 14th Lok Sabha wouldn’t have faced criminal charges if morality had mattered more than money

The current spate of exciting stories recalls Oscar Wilde’s comment that if there’s one thing worse than being talked about, it’s not being talked about. It’s not that the libido is suddenly rampant. Actually, India’s media has always been snobbishly selective. One of my childhood memories is of a jhee—a female household drudge in Bengali—standing at the gate of a venerable widowed professor’s house screaming her head off. I learnt much later she was complaining that the professor paid her only five rupees but had made a pass at her. Would she have welcomed his advances if he had paid seven rupees? If it happens today, would she have invoked the Sexual Harassment of Women at Workplace (Prevention, Prohibition and Redressal) Act, 2013? I don’t know. But I do know it’s highly unlikely her complaint would ever have been reported. As the old song runs,

Robin Jeffrey, author of India’s Newspaper Revolution, says, ‘Stories from the lives of close to 25 per cent of Indians (Scheduled Castes and Scheduled Tribes) are unlikely to be known— much less broadcast or written about.’ Similarly, unflattering stories about the top 25 per cent are traditionally handled with discretion. I don’t know if Vaishnavi Sundar touches on these aspects in her new documentary on sexual harassment in the workplace, But What Was She Wearing, but I do think her title (especially the intriguing absence of a question mark) is delightfully apt—although probably not for reasons Ms Sundari would approve of. It’s apt because clothes do send out a message, and not only in patriarchal class-ridden societies. Innocent masters of Singaporean households would quake in their shoes lest their imported maids lodged false accusations against them.

IMAGINATION ISN’T STRAINED too much to fit employer and employee (intern or job applicant serves just as well) into a modern variant of the medieval French droit de seigneur , a feudal lord’s right to bed subordinate women, especially on their wedding night. A survey by the Indian National Bar Association showed that around 38 per cent of a sample of more than 6,000 male and female respondents admitted they were sexually harassed at work. While 69 per cent did not complain to the management, 65 per cent revealed that most companies ignored the procedure prescribed under the 2013 Act.

The British candidly cite ‘structural perversity and demeaning of women’ for 53 per cent of women and 20 per cent of men experiencing sexual harassment ranging from inappropriate comments to actual assault at work or place of study. In a class by itself was the case of Jimmy Savile, the famous BBC producer and presenter who remained scot free despite persistent rumours and reports of preying on young people and his own necrophilia boasting. Savile’s social position (a belted knight), influence and money—there were allegations of bribing the police—obviously helped to avert judicial scrutiny. Far from having to stand in the dock, he even started legal proceedings against The Sun newspaper which had linked him several times to child abuse at a children’s home in Jersey. Savile died in 2011, a hoary 84, before matters came to a head. But the posthumous investigation swept the man and his works into disgraced oblivion, literally so with his ornate grave stone banished from the cemetery to the anonymity of an obscure landfill.

The current spate of exciting stories recalls Oscar Wilde’s comment that if there’s one thing worse than being talked about, it’s not being talked about. It’s not that the libido is suddenly rampant. Actually, India’s media has always been snobbishly selective

The internationally better known case which may have inspired India’s MeToo movement is of Harvey Weinstein, the American film producer who was released on a million dollar bail after being charged earlier this year with ‘rape, criminal sex act, sex abuse and sexual misconduct for incidents involving two separate women’. Sympathy for these women need not preclude some feeling for his two former wives and five children who are also victims of the tragedy. Although Weinstein pleaded not guilty, he had to surrender his passport, was forbidden to travel beyond New York and Connecticut, and ordered to wear an ankle monitor. It’s another instance of standing the innocent-until-proved guilty axiom on its head.

Given the problem of marshalling respectable witnesses and reliable evidence for acts that occur in the twilight zone between dalliance and intimacy, both sides probably have to fall back on incentives and inventiveness. As Penderel Moon of the Indian Civil Service stressed in Strangers in India, he had found as a magistrate in Punjab that however commendable Anglo-Saxon jurisprudence might be in principle, in practice it frequently leads to miscarriage of justice. Indian courts say they reject the doctrine of ‘Falsus in uno, falsus in omnibus’ (‘False in one thing, false in everything’) to limit the damage. English common law takes the simplistic view that a witness who testifies falsely about one matter can’t be believed on anything else, but in sophisticated India, ‘hardly one comes across a witness whose evidence does not contain a grain of untruth or at any rate exaggerations, embroideries or embellishments’ to quote a Supreme Court verdict. In short, all Indians tell lies. No wonder we mock Heramba Maitra who bought new tram tickets for his two little sons because they had mixed up the earlier ‘Not Transferable’ tickets. Indians wear many hats. The priest reeking of sanctity can be a serial rapist. The skilled surgeon might be a congenital bottom pincher. ‘Do not let your left hand know what your right hand is doing.’ Supreme Court judges must ‘in terms of the felicitous metaphor, separate the grain from the chaff’ which is ‘only possible when the truth is separable from the falsehood’. It isn’t usually because like grain and chaff, truth and falsehood ‘are so inextricably mixed up’.

A STRICT APPLICATION OF the ‘falsus’ doctrine would oblige the courts altogether to ignore whatever evidence is given ‘and reconstruct a story of its own’. That could mean probing the hazy borderlands between friendship and romance, determining where gallantry ends and propositioning begins, and trying to establish when consensual flirting becomes coercive sex. There can be several versions of each situation and they may well contradict each other without being untruthful. Abandoning any attempt to pursue the unattainable Holy Grail of absolute truth, Indian lawyers make the best of the witnesses at their disposal, bearing in mind that all testimony includes an element of fiction.

The law on sex crimes is now fairly straightforward. Thanks to the labours of the Verma Committee, the Criminal Law (Amendment) Act provides adequate punishment for most offences. The previous year’s Protection of Children from Sexual Offences Act guards against Indian Jimmy Saviles of the future. The problem is enforcing the law in an amorphous area where so much depends on subjective judgment, especially with witness and evidence both being notoriously susceptible to persuasion. While social media, where most Indian accusations emerge, is not the most credible of platforms, many fear that India’s defamation laws which allow women who can’t prove their allegations to be prosecuted and jailed for up to two years are a deterrent to justice being meted out.

Given this background, two developments can be expected as the MeToo craze catches on. First, the charge being so sensitive, victimisation on the merest suspicion, as already reported in several high-profile cases, is not surprising. Second, the enlarged scope for lawsuits, with the accused targeting accusers with countersuits, will mean an unholy scramble by both sides for obliging witnesses and manufactured evidence. It will be a field day for con men as the sequence of Arthur Miller’s The Crucible is played out again in another nationwide frenzy. The flourishing new industry involving sex, money, influence-peddling and operators that is in the making could further subvert judicial processes as it jostles for political patronage.