Srinivas Kuchibhotla paid with his life for his optimism 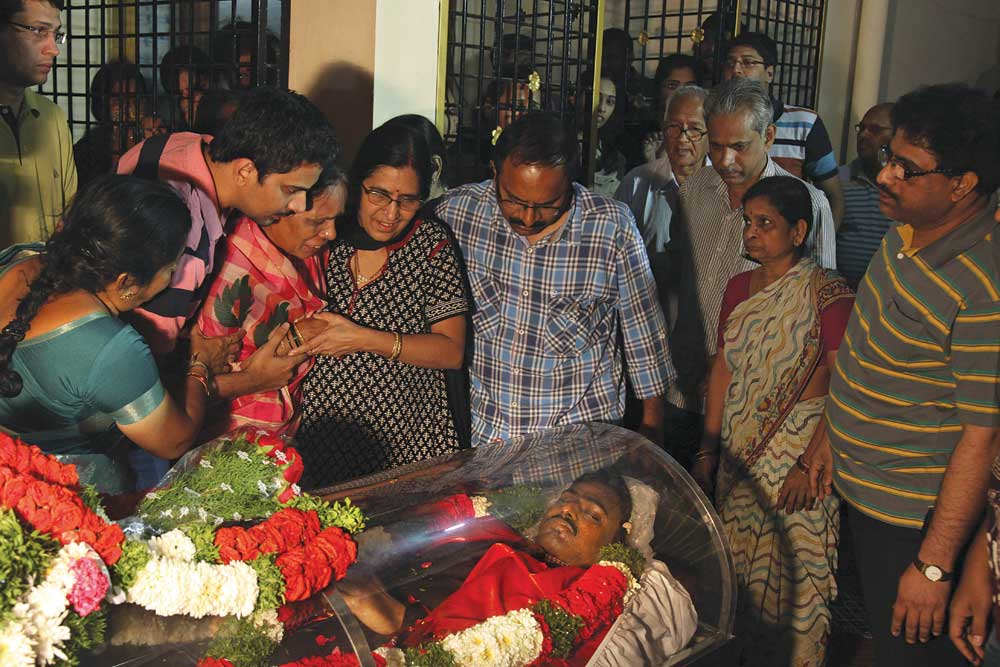 RAVI BANGAR, INDIA’S high commissioner in Nicosia, is a deeply disturbed man. There are 5,260 Indians in Cyprus, he says, and 50 per cent of them are domestic maids. Not only that. It seems unbelievable that 90 per cent of the maids should be from Punjab, the land of five rivers flowing with milk and honey. Cyprus is an idyllic Mediterranean island peopled by gentle Greeks who wouldn’t dream of brutalising servants like the Saudi Arabian employer who was accused of chopping off a maid’s right arm when she complained of harassment and torture. But the very fact of Punjab sending its damsels across the seas to sweep, swab and cook for alien households distresses him. “What has happened to Punjab’s buoyant economy?” he demands. “Where is Punjabi prosperity?” There were maids from Sri Lanka and Bangladesh, even South India, in other countries where he has served. But never before from Punjab.

I recalled that conversation when I flew into New Delhi and read of the tragedy of Srinivas Kuchibhotla, the 32-year-old aviation engineer from Hyderabad who was shot dead in a Kansas City bar in the United States while his companion, Alok Madasani, escaped fatal injury. An aviation engineer is not a household drudge. But the Punjabi plight Bangar lamented is now India’s. The push factor is at least as strong as the pull factor when it comes to migration. Kuchibhotla’s murder was an indictment of the India that cannot provide for its own, especially not for those talented few whom it trains at enormous cost to the exchequer. A little bit of India’s future died not when he was killed but when he went away.

A few emigrants might be bitten by wanderlust. A few may have professional or personal reasons for living in another country. Some are taken with the lifestyle or politics or freedoms that are thought to flourish abroad. But most ethnic Indians from Mauritius to Malaysia, from South Africa to Singapore, whether voluntary or coerced, are economic refugees. From Girmitya (colloquial distortion of ‘agreement’) descendents of indentured labourers in Fiji’s sugarcane plantations to Harvard dons, from British peers to American governors, the profit motive is the driver. Like dazzling bursts of illumination in a darkened sky, the community produced the genius of VS Naipaul in Trinidad and Satendra Nandan’s sensitive poetry in Fiji. Otherwise, India’s diaspora, old or new, remains tethered to its original raison d’être of making a better living in a new setting.

I wasn’t proud to read that Subrahmanyam Jaishankar, the foreign secretary, was going to Washington to discuss not just Kuchibhotla’s killing but India’s concern that Donald Trump might reduce the 65,000 H1B visas issued annually. India has always maintained it doesn’t export manpower. In practice, it has always done exactly that by not only making an issue of such privileges but also by virtually turning a blind eye to passport and emigration rackets. I hung my head in shame when I read the four dos and don’ts suggested by the general secretary of the Telengana American Telugu Association. The Indian emigrant who wishes to survive in the US must not get into arguments (presumably with Whites) in public places. If provoked, he should make a rapid getaway. He should avoid isolated places. Never must he lapse into his native language in public. He shouldn’t hesitate to call 911 in an emergency and wait to be rescued by the police. This is worse than instructing call centre operators to conceal their identity under an assumed Western name and a phoney American accent. It’s just as disgraceful as the bleaching creams and hair straighteners with which Afro-Asians ashamed of their appearance torture their bodies. The great adventure of a new life in a new land hardly seems worth the while if it is conducted in hole-in-the-corner secrecy.

Kuchibhotla’s murder was an indictment of the India that cannot provide for its own, especially not for those talented few whom it trains at enormous cost to the exchequer. A little bit of India’s future died not when he was killed but when he went away

What intrigued me most was the reported announcement by the dead Kuchibhotla’s childless young wife, Sunayana Dumala, that she would return to the land where she was so cruelly widowed. No one would dream of being so insensitive as to suggest she has become attached to its services, facilities and comforts. It is more likely that like the courageous Australian boy who insisted on swimming again in the ocean where a shark had attacked him, she is determined not to be cowed down by her bitter experience. But the poignant defiance of the lady’s ‘I have a question: do we belong?’ prompts a counter-question. Who is the bereaved Sunayana Dumala addressing? Which country does she feel is denying her the right to belong? Since today’s India with its Overseas Citizen of India and People of Indian Origin cards almost unreservedly accepts all her genetic children, the question—accusation really—can only be aimed at the US.

Like civilised governments everywhere, Trump’s administration enjoys a general obligation, as does Narendra Modi’s in India, to protect life and property regardless of race, religion or political allegiance. Beyond that, however, the US has no special responsibility for the welfare of economic migrants. Much can be said in condemnation of American policies, but we have no right to say it except when American actions affect legitimate Indian interests within India’s own jurisdiction. This is not 1850, the year of the Don Pacifico incident. India is not imperial Great Britain, and the US is not a cowering Greece for New Delhi to consider some variant of sending battleships as London did when a Greek mob damaged the property of a Jew born in Gibraltar and, therefore, a British subject who was Portugal’s consul in Athens. For all of Modi’s bombast, an India that goes cap in hand to the US for jobs is in no position to register more than a token protest.

We have intruded into matters of American domestic concern only because we find the space at home too confining. That can be perilous. Indians who foolishly interpreted Trump’s calls to clamp down on Muslim migrants as support for this country’s resurgent Hinduism remained blissfully ignorant of the threat their skin posed. Colour is even more the ultimate reality than Disraeli’s race. Rabindranath Tagore noted after a brush with San Francisco immigration officials that Christ Himself would be refused admission ‘because, first of all, He would not have the necessary money and secondly He would be an Asiatic’. For Philadelphia-born Amar Bose, whose sound system is a household word worldwide, ‘the big problem was colour, pure and simple’. Jawaharlal Nehru wrote feelingly about the international hierarchy descending from Anglo-Saxons through the Mediterranean races to Latin Americans. Asians and Africans were at the bottom. What compounded the paradox was that those who encountered Nehru in real life didn’t think this global caste system had much effect on his own attitude to the White races. Could any Indian journalist say with James Cameron, a British reporter I knew, liked and admired, that Nehru had peeled apples for him at breakfast?

BELONGING IS A state of mind. It’s a question of perception. Only a few miles from Ravi Bangar’s office at 3 Indira Gandhi Street on Nicosia’s Montparnasse Hill, but in another world, I met Brian Kelly, a lanky ebullient weather-beaten Irishman who spent about 30 years in the US without—and this will seem unbelievable to most Indians—acquiring American nationality. He can’t, like me, drive a car either, and cycles everywhere on a battered Mongoose bike. Brian worked for the United Nations, retired from the Sudan, his last posting, and bought a house in the Turkish part of divided Nicosia where he lives with his Polish girlfriend and hordes of cats and dogs. That is where he has chosen to belong. But his Turkish enclave is forbidden to many Greek Cypriots who were expelled when heavily armed Turkish troops landed at Kyrenia (which they have since renamed Girne) on the northern coast in the cold grey hours before dawn on Saturday, July 20th, 1974, and annexed 37 per cent of Cyprus. I know ethnic Greeks in faraway Australia who have lived nowhere else but still long for the homes and villages that Turks now occupy. It’s a sentiment I understand, for the land that my family regards as desh is a fragment of what is now the Republic of Bangladesh. It is what Naipaul calls a ‘tribal home’, something he had never had, he once admitted, possibly with a tinge of regret. Unlike Naipaul, Nehru rejected assimilation in England; he always felt ‘a queer mixture of East and West, out of place everywhere, at home nowhere’. That, too, I can understand, having lived many years in England and Singapore, spending my formative teenage years in the first country to which I remain bound by ties of memory and affection, but without letting down roots.

I was in a corner shop in London once wearing a tatty old coat of my son’s on whose shoulder he had stitched a little tricolour. “It’s all we have left,” remarked the young man behind the counter. Born in East Africa, he had moved to England with his family and never set foot on Indian soil. A library assistant who hadn’t been to the land of his fathers either made a similar nostalgic comment. For him as well as for the corner shop boy, there loomed beyond the manifest reality of a suburban London home a concept for which both yearned.

Apparently, Kuchibhotla suffered from no such yearning. Despite her pointed question, his wife may have done. If the reports are accurate, she urged him from time to time either to return to India or to find another asylum. “No,” he would reply. “Let’s just see. Let’s wait and see.” He did not know Dante’s ‘bitter taste of others’ bread, how salt it is’ for it was not the bread of exile for someone who either regarded the world as his oyster—like my Irishman in Turkish Nicosia—or had infinite faith in American justice. “Good things happen in America,” he said. Yes, they do. American society is much more open than ours. I also accept the difference Senator Adlai Stevenson III underlined when he pointed out at a seminar in Chicago where I was speaking that while India has representative government, the US has democracy. But colour defines many American freedoms.

The question is: must Indians be exposed to the peril of discrimination? There’s no denying that for many Indians even American discrimination is preferable to the want and suffering that is their lot at home. Many find India’s corruption, nepotism and political favouritism and opportunism intolerable. Many want America’s brisk efficiency. They can’t be stopped from escaping. Even if it were possible to refuse passports and ban travel, such harsh measures would be like forcing families to starve because child labour is unethical. The only answer is to make India less unattractive even for Indians who admit no emotional linkage. Lee Kuan Yew didn’t achieve almost 100 per cent literacy in Singapore by making education compulsory. He created a society in which it was impossible to advance without education, and he ensured that every Singaporean had easy access to efficient, inexpensive schools. There’s a lesson there for any nation that wants to make progress beyond mouthing slogans.

Srinivas Kuchibhotla paid with his life for his optimism. If more gifted young Indians continue to do so, this country will have no future to look forward to.