As the Constitution turns 70, its spirit needs to be guarded not only by parliamentarians but also by the people with utmost sacredness 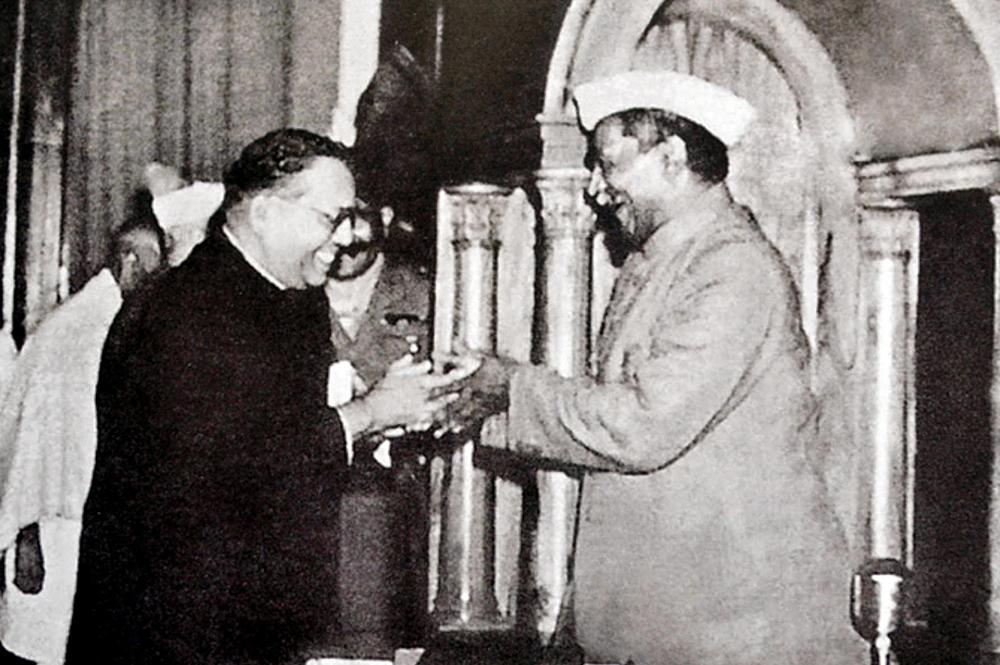 Babasaheb Ambedkar, Chairman of the Drafting Committee, presenting the final draft of the Constitution to the first President, Rajendra Prasad, on November 25, 1949


Seventy years ago, on this day, the Indian Constitution was finally signed and sealed by the Constituent Assembly. It was the first ever democratic Constitution that India had adopted. In the past, we used to have smritis that contained rules for social order. Smritis were rendered by men of wisdom like Narada, Yagnyavalka and Manu. They were not binding on society. Yet, largely, contemporary societies had accepted them as guides for social behaviour. Some scholars describe the Indian Constitution as Ambedkar Smriti. The role that Dr Ambedkar had played in drafting this Constitution was phenomenal. It was to draw from many sources, including the Government of India Act, 1935 and constitutions of various Western countries, yet it had to be quintessentially Indian. In the end, that was what we got on 26th November, 1949, courtesy the efforts of Ambedkar and his team.

Ambedkar, the architect of our Constitution, had delivered a brilliant speech one day before, on 25th November, highlighting threats to the Constitution. That speech became famous as ‘Ambedkar’s Three Warnings’. The first warning he gave was about strict adherence to constitutional methods in “achieving our social and economic objectives.” Means are as important as the ends, Gandhiji, whose portrait used to be hung above the podium of the chairman of the Constituent Assembly, used to insist. Ambedkar’s second warning was about hero worship. “Bhakti in religion may be a road to the salvation of the soul. But in politics, hero worship is a sure road to degeneration and to eventual dictatorship,” he warned. Quoting Irish patriot Daniel O’Connel, who said, ‘no man can be grateful at the cost of his honour; no woman can be grateful at the cost of her chastity; and no nation can be grateful at the cost of its liberty,’ Ambedkar had said that caution was far more necessary for India than any other country. His third warning was that we shouldn’t be content with mere political democracy and strive to achieve social democracy as well. “Political democracy cannot last unless there lies at the base of it, social democracy,” he cautioned.

Ambedkar’s warnings were far-reaching. But equally important, although less talked about, was the speech of the chairman of the Constituent Assembly and the first President of India, Dr Rajendra Prasad. He delivered the last address to the Assembly before the Constitution was signed on 26th November, 1949. For the first time, universal adult franchise was introduced despite reservations from some. Rajendra Prasad had defended it in his address by saying, “I am a man of the village and my roots are still there. I, therefore, know the village people who will constitute the bulk of this vast electorate. In my opinion, our people possess intelligence and commonsense. They also have a culture which the sophisticated people of today may not appreciate, but which is solid. They are not literate and do not possess the mechanical skill of reading and writing. But I have no doubt in my mind that they are able to take measure of their own interest and also of the interests of the country at large if things are explained to them.” Interestingly, one of the major regrets of Rajendra Prasad was that the Constitution couldn’t lay down some qualifications for the members of the legislature. “It is anomalous that we should insist upon high qualifications for those who administer or help in administering the law but none for those who made it except that they are elected,” he bemoaned.

It is the case not just with India, but with all democracies. Parliamentary democracies arose as an answer to the selfish and untalented monarchs and dictators in the last two centuries. It is through the parliaments that charismatic leaders acquire power and give dynamism and direction to countries. And therein lies the protection of the Constitution too. In other words, the welfare and well-being of the country depends on the quality of our parliamentarians. The parliamentarians too face a challenge that Max Weber, the eminent political philosopher, had highlighted very rightly. Charismatic leaders and powerful parties make the role of the parliamentarians rather constrained. They are mostly reduced to ‘well-disciplined lobby fodder’, according to Weber.

That was why Rajendra Prasad had done some plain-speaking in his final address. “If the people who are elected are capable and men of character and integrity, they would be able to make the best even of a defective Constitution. If they are lacking in these, the Constitution cannot help the country. After all, a Constitution, like a machine, is a lifeless thing. It acquires life because of the men who control it and operate it, and India needs today nothing more than a set of honest men who will have the interest of the country before them. It requires men of strong character, men of vision, men who will not sacrifice the interests of the country at large for the sake of smaller groups and areas and who will rise over the prejudices which are born of these differences. We can only hope that the country will throw up such men in abundance,” he said.

When the Constitution turns 70, the country is blessed with a leadership that truly represents such men. If the mission of the Constitution were to be described in one word, it is justice. The upholders of the Constitution should try to render justice to the last man on the street. ‘Man is born free, but everywhere he is in chains,’ lamented Rousseau. Ambedkar had seen these chains as social and economic. For Gandhi and Vinoba Bhave, they were moral. The Constitution’s mandate was to remove those chains so that people of this country enjoy justice—social, economic and moral.

Ambedkar had said that the ideals that inspired the French Revolution—liberty, equality and fraternity—were the ones that formed the core of the Indian Constitution too. Liberty and equality are achievable through constitutional means, whereas for achieving fraternity, laws are not sufficient. A constant endeavour to render justice to all sections of the society can only engender fraternity. As long as a section of the people feels discriminated against, the sense of brotherhood can’t be achieved. Not just the state, but society too needs to shoulder responsibility for it. The spirit of the Constitution needs to be guarded not only by parliamentarians but also by the people with utmost sacredness. That is called constitutional morality.

As Ambedkar had put it, “Constitutional morality is not a natural sentiment. It needs to be cultivated.” On this occasion, let the nation dedicate itself to the task of cultivating that.