The counter-revolution of Mamata Banerjee 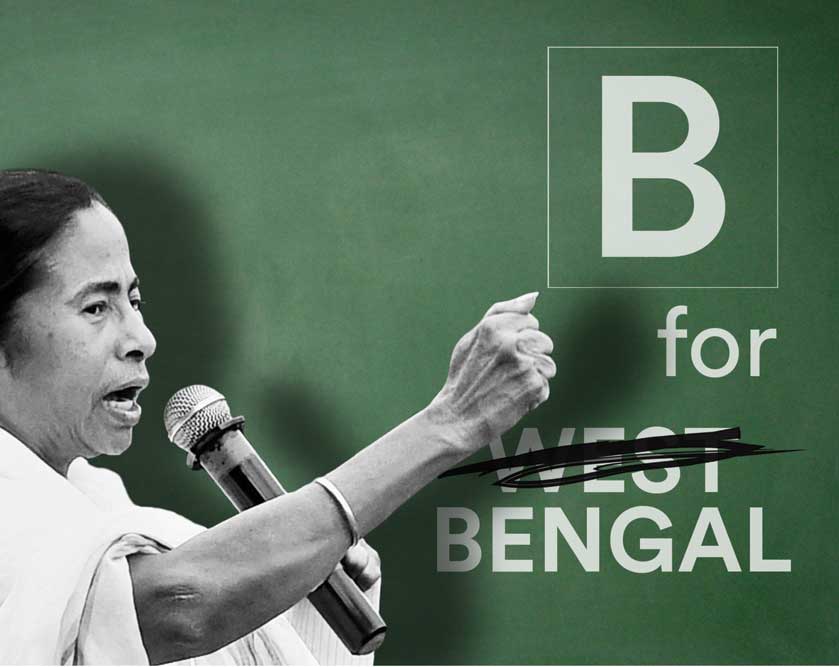 AN AMERICAN CONSULAR official in Calcutta was once explaining to his ambassador visiting from Delhi that everyone in West Bengal including the Chief Minister, Siddhartha Shankar Ray, on whom he had just called, was actually from East Bengal. “I’m not!” blurted out a smart, young party-going company executive. “That’s what I meant,” the consul told his boss.

‘Bangal’ and ‘Ghoti’, slang terms for people from East and West Bengal respectively, may still be used in popular discourse but the sharp cultural difference they once signified has mellowed with political change and the passage of time. Ray and his successor, Jyoti Basu, were both technically Bangals with proud ancestral roots in what is now Bangladesh. Born and raised in the dust of lower middle-class Calcutta, Mamata Banerjee must be reckoned a Ghoti. The parivartan, change, she promised when ascending the Chief Minister’s gaadi in 2011, may erase the distinction altogether. There’s neither East nor West if West Bengal as Bengal rivals Bangladesh in encompassing the entire Bengali-speaking community.

East Bengal was always only a state of mind. There was never such a designated area, not even in 1905 when Lord Curzon’s separation of the two halves of Bengal inspired Rabindranath Tagore’s ‘Banglar Mati Banglar Jol’ as a rallying cry for those who vehemently opposed partition. The Eastern Bengal Railway launched in London in 1857, the year of the Great Uprising, was merged and re-merged with so many other networks over the years that no whiff remains of the line that once plumed its way through the green and gold jute and paddy fields to the steamer at Goalundo Ghat on the broad sweep of the Padma river. The East Bengal Football Club’s logo now sports the Kingfisher brand.

Yet, a notional East Bengal continues to haunt West Bengal, relegating it to what sociologists call ‘the Other’. Banerjee probably feels somewhat diminished terminologically. There’s Hasina Wazed, also in a sari, lording it in Dhaka as prime minister of a sovereign state. And Didi, unquestionably entrenched in a city that was once the capital not only of united Bengal but of the entire country, must be content with being Chief Minister of only the state’s western half. Not just that. She must cool her heels in the Delhi durbar while the leaders of Andhra Pradesh, Arunachal Pradesh and Assam, followed by states starting with the other 21 letters, make speech after speech merely because unkind fate has placed West Bengal last in the alphabetical list. Every so often a new state—Chhattisgarh, Jharkhand or Uttarakhand, to say nothing of Haryana earlier on—creeps in to push West Bengal further down. Didi can, like Robert Clive, be astonished at her own moderation for not replacing West Bengal with some name that starts with A, so that she tops the list. For, by the time she has pulled her sari round her and started to speak at conferences, other delegates are tired and drowsy. To add insult to injury, with time running out, she is forced to rush through her remarks. Little wonder she sulked out of going to Dhaka with Manmohan Singh in 2011.

Protocol and precedence have always been the bugbear of politicians. Since the job depends on being ahead of the pack, they must devise ways and means of beating others who are also bent on being upfront. No wonder a seasoned diplomat like Daniel Patrick Moynihan, American senator and ambassador to India where he wallowed in a viceregal sense of consequence, felt deeply chagrined to find that whenever he travelled in Air Force One with Henry Kissinger, the German-born Jew who ranked below him was always first out on the tarmac. When the Shah Commission asked Narayan Dutt Tiwari if he had accompanied Sanjay Gandhi to Dehradun, the otherwise obsequious Congressman shot back, “No sir, he accompanied me!”

To be relegated to a back seat must be especially galling for a self-made politician who has pushed, jostled, clawed and scratched her way to the top from the depths of nowhere. It must be another conspiracy hatched if not by the saffron brigade, then by the wicked Reds under the bed. No one has told Didi that the Marxists beat her to it in seeking to reinvent West Bengal. Basu even set up a committee to consider the change. As a member of that committee, I don’t remember anything very serious or substantive ever being discussed. But when ‘Banga’ or ‘Bangla’ was suggested as the new name, I did venture to point out that just as the Chief Minister preferred the Anglicised Basu to the Bengali ‘Boshu’ for his own surname, historical continuity and linguistic facility might best be served by retaining Bengal, without the West. Thirty years later, I might reconsider that view.

Nothing happened then. Under his laconic exterior, Basu was an educated man. He had some understanding of the forces of historical change and was aware of the dynamics of national identity. I couldn’t see him gnashing his teeth and stamping his feet in impatience because he got “to speak last when there is little time left”, as a senior Trinamool Congress leader is quoted as saying of the present Chief Minister. In fact, Basu said as little as possible, probably believing with Talleyrand that speech was given to man to disguise his thoughts. Some West Bengal governors, appointed by the Congress Centre to keep an eye on the Marxist Chief Minister, were irked by his non-committal reticence.

But he wouldn’t have thought of a protocol solution either, as Lord Mountbatten famously did at his first banquet in Delhi to celebrate the completion of VP Menon’s hatchet job integrating the states. Instead of today’s alphabetical list which arouses Didi’s ire, the princes were ranked according to the date on which they signed the instrument of accession. Gwalior, Bikaner, Patiala and Baroda joined India first, on 28 April 1947. Hyderabad was the last reluctant signatory. But even if its ruler had to be dragged in chains to dine with the victors of Operation Polo, it would have been unthinkable to place His Exalted Highness the Nizam-ul-Mulk Sir Mir Osman Ali Khan, Faithful Ally of the British (India was still nominally a dominion under the Crown and Mountbatten its governor-general) and one of the world’s richest men, at the bottom of the table. Being himself a displaced royal, Mountbatten thought up a neat solution. He ordered a round dining table so that the person in the lowest seat was next to him, albeit on his left.

History’s unkindness has not affected Bengal’s exuberant political life. Whether or not this exuberance serves any purpose is another matter

Didi’s previous attempt at reinventing West Bengal, which foundered on New Delhi’s opposition, was equally symbolic. Perhaps the Centre felt six years ago when it refused to sanction the new Trinamool Congress government’s proposal to call the state ‘Paschim Banga’ that this straight translation of West Bengal merely pandered to linguistic nationalism without reflecting any new thinking. It was as meaningless as calling Calcutta Kolkata. Now, the West Bengal government has decided to drop ‘West’ from the English name and ‘Paschim’ from its Bengali version. “Renaming the state would protect the interests of the people and the state,” says Banerjee’s faithful aide, Partha Chatterjee. The state will be ‘Bengal’ in English and ‘Banga’ or ‘Bangla’ in Bengali. An all-party meeting in the presence of the Assembly speaker is expected to be followed by a special session of the Assembly—possibly at the end of August—to pass a resolution which will be sent to the Centre to be approved by both Houses of Parliament. Among the precedents cited are East Punjab dropping the East, and Orissa becoming Odisha. As for hoi-polloi jokes about Bongs in Bongoland, the national anthem, Jana Gana Mana, already sanctifies Dravida Utkal Banga.

Happily, history’s unkindness has not affected Bengal’s exuberant political life. Whether or not this exuberance serves any purpose is another matter. But politics was of the essence of existence for most Bengalis until shopping malls took over. EM Forster’s comment about Indians in Two Cheers for Democracy used to apply especially to Bengalis. ‘You cannot understand the modern Indians unless you realise that politics occupy them passionately and constantly, that artistic problems, and even social problems — yes, and even economic problems — are subsidiary,’ Forster wrote. ‘Their attitude is ‘first we must find the correct political solution and then we can deal with other matters.’’

Kanu Sanyal’s suicide highlighted both the failure of politics and the politics of failure. His Naxalites were never within paan-spitting distance of the countryside encircling and overpowering Kolkata. Now, Chhattisgarh seems to have stolen Bengal’s revolutionary thunder. History is ‘past politics’ said Sir John Seeley, the 19th century English essayist and historian. There’s rich fare to mull over, from devotional fervour and terrorism to the Young Bengal Renaissance. But if politics is ‘present history’, to quote Seeley again, future generations may find the chronicles of our time somewhat barren. When the Left Front’s days were clearly numbered, many wondered whether West Bengal was not jumping from the frying pan into the fire. That fear still lingers. But Didi has cleverly achieved the promised parivartan with a move that seeks to wipe out the pain and horrors of Partition in 1947 by stressing the indivisibility of the Bengali nation. We are good at semantic progress: famine cannot exist in a land where people know scarcity but not starvation.

Dwijendralal Roy didn’t confine himself to West Bengal (which didn’t exist as such at the time) when he sang the stirring Banga Amar Janani Amar. Tagore certainly didn’t have the non-existent People’s Republic of Bangladesh in mind when he wrote what is now Bangladesh’s national song, Amar Sonar Bangla. In 1971, Bangladesh usurped the entire Bengali heritage. Mamata Banerjee has now upstaged it to lay claim to one of the three (Anga, Banga and Kalinga) of the five ancient kingdoms of Bharatvarsha. It’s her counter- revolution to answer Sheikh Mujibur Rahman’s revolution.