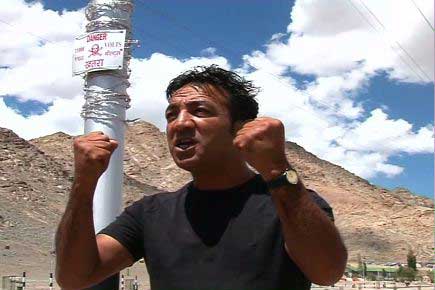 
This film offers many of the old-fashioned pleasures of the documentary: it takes us to an unfamiliar place and tells us an unknown story. In this case it’s also an unexpected story.

Out of Thin Air is a wryly told ethnography of the local digital film industry that has sprung up in Ladakh. Today it produces 20 music videos and six feature films a year and most of these are super hits, with people thronging the halls in boisterous anticipation. The technicians and artists of this indigenous film industry are all locals. From diverse, often multiple, professional callings, as the many layered title cards that introduce them show. For instance, Norbu, monk and key-keeper of a monastery; also, producer, screenwriter, lyricist, actor and choreographer. Or Zulfikar: PWD employee, cab driver. And villain. Norzem: J&K plainclothes division of police. And second most popular actress. None of them is trained in filmmaking or has worked in a larger film industry before. As one says, they just picked up a digital camera and decided to make their own films “out of thin air.”

While the film consistently evokes the drollness inherent in any activity that is replete with improvised solutions—that local jugaad of subcultures—it never gives in to the temptation of camping up the kitsch aspects or mocking the people. We feel mostly an enjoyment of the sheer gusto and innocent desire of people who want to make their own movies.

The gentleness of the filmmakers’ gaze seems to mirror the gentleness and modesty of the characters. There’s definitely pride in their achievement— they’ve even managed to import a crane into those high mountains! But there are no grandiose declarations, no grandstanding and boastfulness. Whether it is the monk who likes to write romantic songs, his eyes dreamy, his sunglasses smartly sitting on his head, explaining how he is inspired by the moon and memories, or the actress refining dance moves and coquettish expressions to a Hindi film song, we recognise simply the great human desire for expression, performance, stories, fun—and the importance of being someone special among your peers.

That this industry is set in Ladakh is interesting politically and perhaps the film doesn’t manage to draw this out enough: the fact that Ladakh is, as Zulzul, the most famous villain-actor describes it ‘last India. After this you see Tibet or Pakistan, no more India’. That it sits awkwardly on these borders, a part of the state of Jammu and Kashmir, a part of the Indian nation, but separated by its geography, its impassable winters, its arid land and much else. Typically, though rations do not get here, seductive and relentless Bollywood does.

One can see that the local films grapple with all these things—on the one hand inescapably influenced by Bollywood-style song, dance and sentimentality, on the other attempting to retain something of the slowly eroding local language and culture.

This may explain why costume dramas are most popular. Less easy to understand is why all the films that ‘work’ are, as an actor calls them, the ‘glycerine films’. He means tear-jerkers, of course. Maybe that’s the true national culture that unites us all!

The increasing number of small, local film industries—Malegaon, Hyderabad, Manipur and now Ladakh are testimony to the fact that no matter what the obsessions of the national mainstream media, Bollywood does not represent the collective fantasy. It caters largely to a metropolitan multiplex audience; for other dreams, inflected with their own realities, people are making their own films. After all art and culture cannot persistently be subject to the logic of numbers—as Bollywood inescapably is—but have to be about human desires other than the desire for profit.

Of course, as this industry succeeds, like all successful things, it sets up its own hegemonies. We see this in a touching and funny interview with a filmmaker called Tashi Dawa. He makes only action films, and these regularly flop, but he keeps on keeping on. “Aajkal emotional ka daur chal raha hai” (Emotional films are the current rage), he says wistfully. “Maybe one day our time will come when action films will be popular.” And Norzem, the no. 2 actress, though diplomatically admiring of her, does not aspire to the qualities of Stanzin, the no. 1 actress. Not for her the lachrymose feminine. “I wish I could get roles like Kajol’s,” she says ruefully. “More naughty, lively.

Out of Thin Air, like the films of many of the younger generation of documentarians, displays a certain ease with the medium. It’s very nicely shot—capturing the beauty of the cold, clear light, the silver and red of the landscape, without resorting to exotica—and is edited with a lightness of touch and a twinkle in the eye. Like the subject it has chosen, the film too shows us that it is not only to Bollywood that we need turn for our enjoyment.