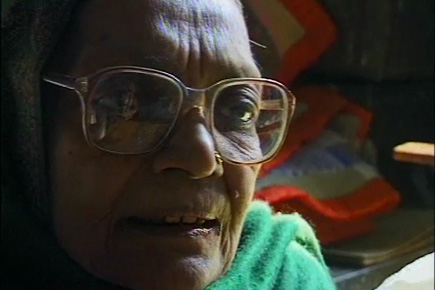 
An Old Delhi neighbourhood full of highly skilled craftspeople struggles to survive, to keep some fragment of its poetry in a city whose priorities are far more prosaic.

We find ourselves at a moment in documentary practice where the European and American formats of the “universal” and “personal” shape a number of character-driven documentaries that manage to be strangely decontextualised, and hence, mildly cannibalistic in their pursuit of other people’s reality for the purpose of crafting an absorbing film. In being this way films turn both subject and viewer into strange commodities.

In such a context, a film like Sagira Begum is a wonderful example of how biography can be history, and allow for a dignity, rather than a voyeurism, in our absorption. This is a still, deliberate film, portraying Sagira Begum, an old, zardozi worker from Shahjahanabad/Old Delhi. It never gives in to the anxieties of explanation, but, in a series of sequences like moving paintings, allows the complexity of its meanings to seep through.

Sagira Begum was born in Old Delhi and displaced from her home in the upheaval following Partition. She gave birth to her son in a camp on the steps of Shah Jahan’s gate, in the rainy days that followed immediately after August 15. Soon after, she went to Karachi, only to return a few months later. “That was it, I never thought of leaving home again,” she says. Why not, the filmmaker asks her. “Bas hamara man nahin laga,” she says. This was home, this is where she and her family felt happy, this was where they would stay.

Sagira Begum is a tiny woman, stooped, but lively and talkative, always busy—either with her zardozi work or with scolding various young kids who come to her for Quran lessons. Like many who are old, she reminisces about the old times as charmed and carefree; times when Jama Masjid stood out “clear as a mirror” and there were only two shops there, one for dahi bade, one for kulfi; times of plenitude—when work was plenty, leisure too, handis cooked large meals and there was love to go around. Now, she says, look at kids, sab ko gham laga hai, everyone is in a spin. It was said that a time would come when the walls would talk, and they do—it’s the television, she exclaims.

No doubt Sagira Begum is a ‘character’, full of choice phrases and endearingly absolute declarations, but this is not a film about quaint nostalgia. Through a biography of someone living in the neighbourhood, Sameera Jain unfolds the story of a dying craft, a lost world and perhaps the debasing of everyday cultural life, even as it looks at how each life is a combination of choice, circumstance and political event. As we compare the beautiful zardozi that now hangs in museums—the kind that Sagira Begum remembers her grandfather making—with the crude versions sold today, we cannot but think that there is very little place in contemporary life for beauty and its accompanying truth, for the skill and craftsmanship that takes time and care and becomes a metaphor for a life lived with love and pleasure. Even Sagira Begum’s rich, everyday relationship with language, her limber use of words, irony, joking to tell a story seems a rare thing now.

In many ways the film approximates this craft in its own making. Dilip Varma’s lovingly composed frames, winter light touching even the cramped streets, messy wires, cycle rickshaw jams and stacked terraces with a lambent beauty, accumulate a delicate embellishment, set up a meditative rhythm, and allow us to reflect on the deep history behind Sagira Begum’s story—a history in which the centre shifts to the margin and is slowly left behind.

Most people see Old Delhi as a Muslim ghetto, an urban infrastructure nightmare (although perhaps the Metro is changing that). It is the chosen impression that those who live in this neighbourhood are incapable of keeping it clean, and their discontent lies at the heart of communitarian violence.

Watching Sagira Begum, we see the injustice and stupidity of this viewpoint. Or to be more generous, the irony of this prejudice. A neighbourhood full of highly skilled craftspeople, struggles to survive, to keep some fragment of its poetry in a city whose priorities are far more prosaic or maybe more technical. Craftsmanship becomes unorganised labour, constantly squeezed of its modest profits by traders and middlemen exporters—zardozi being popular for tennis club patches and suchlike in Western countries. Artisans find they may have to give up that which they excel at in order to survive in a most basic way. Those who came back from Pakistan to choose it as home find that there are fewer places in the country where they can make a new home; they search for a destiny in the narrow lanes of a neglected city, in a country which was supposed to have unity in diversity.

(Also in this series: Bhai Mian) 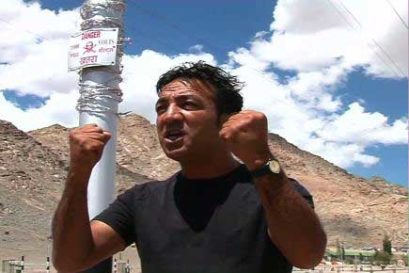