The Future of Work

With personal space a medical necessity and homes doubling as offices, tomorrow might be in for a rehaul 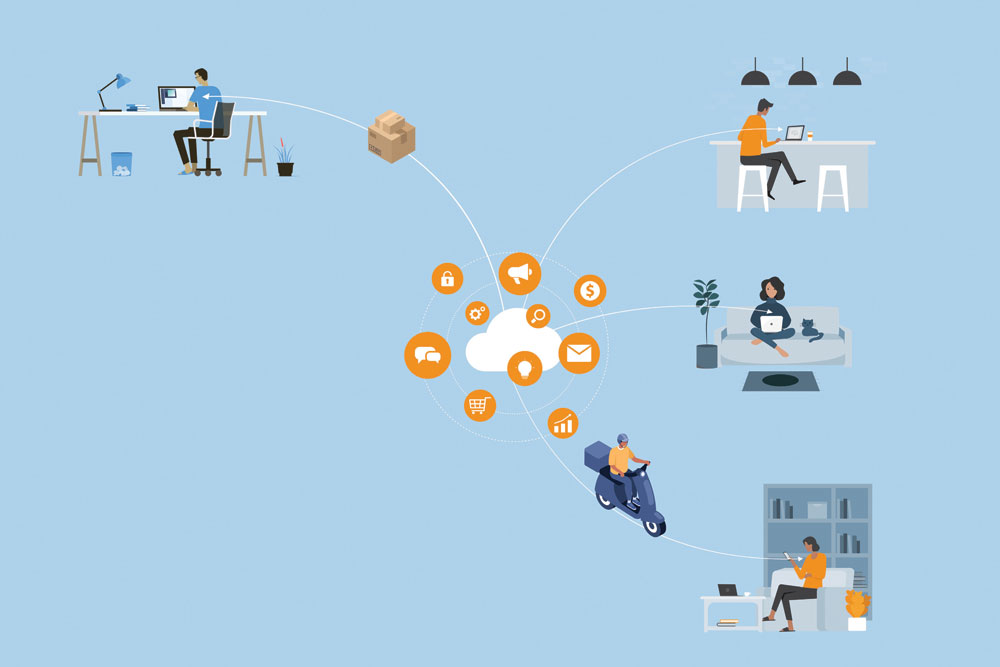 
UBER IS AN aggregator of drivers. You could stretch it to even being a cab company, which is how many places are trying to regulate it. After the announcement of the lockdown, it has been trying to get back on the roads, but this time as a deliverer of groceries. On April 6th, it put out a short release on its website of a tie-up with Flipkart: ‘We understand how important it is for millions of Indians to access essential supplies during the ongoing nationwide lockdown. To meet this need we have tied up with one of India’s leading online marketplaces, Flipkart, to provide their customers enhanced access to essential supplies across Delhi, Mumbai and Bangalore. This marks our third such B2B partnership within a week, following those with Bigbasket and Spencer’s Retail for our new last-mile delivery service to facilitate delivery of essential supplies to consumers.’ A business grows on its brand and even though Uber has one of the best brands in the world related to transport, in a post-pandemic world, the contours of many businesses might not be the same. So Uber jumps from transporting people to now groceries (despite an earlier experiment with food delivery having failed). Likewise, Swiggy, which delivers cooked food from restaurants, has now tied up with FMCG companies like ITC and Marico to deliver packed food and groceries. If continuing to have a job has been relegated to the fine edge of a sword across sectors, then in a world under lockdown, the only ones who will never be in want of work are the deliverers. If a population cannot move and must be fed, then the bridge between producers and consumers will need to be very long and strong; one that will have to hold until a vaccine that is years away. Every new Covid case that slips through—a recurring feature to be in our lives now—will make deliverers the face of essential services. It is now the profession with the most job security in India.

Big economic crisis often propel forward changes that were already on its way. The 1990 balance of payments crisis led to liberalisation which in turn made computing widespread in a country where labour unions had been long resisting it arguing that it would lead to unemployment. The rights of workers had so far taken precedence over efficiency, lower cost of operation and the convenience of customers. Today, in retrospect, pushing against computers seems like a futile battle that no workforce in the world could have won. But at the time it didn’t seem inevitable. Bank computerisation had begun to be initiated in the early 1980s but it wasn’t until a decade later that it truly got going. If there is a similar tipping point today, what is it tipping?

The idea of the physical office itself for one. In just three weeks, corporations have seen first-hand that much of their work can be done by people sitting at home. In many multinationals, there were already practices that allowed or even made it mandatory for executives to work a day or two a week from home to save on space and time. But the idea had not been taken to its logical end. Recently, the thinktank Brookings Institution published an article in which the writers argued that telecommuting would continue long after the pandemic ended. They said that when remote working first became a trend everyone expected it to catch on faster but that never happened because of the inertia of work cultures, too rigid and lazy to change. Also, employers didn’t invest time and resources in technology and training. That has changed overnight. ‘But the pandemic is forcing these investments in industries where telework is possible, with more people learning how to use remote technology. As a result, we may see a more permanent shift toward telecommuting. As the economist Susan Athey recently told The Washington Post, “People will change their habits, and some of these habits will stick. There’s a lot of things where people are just slowly shifting, and this will accelerate that,”’ said the article.


A business grows on its brand and even though Uber has one of the best brands in the world related to transport, in a post-pandemic world, the contours of many businesses might not be the same

In India, a major factor comes into play—the danger of commuting with the virus around. Take our biggest cities, Mumbai and Delhi, where a majority of the big businesses are headquartered and whose employees are ferried by train and bus networks to hubs. In peak hours, a suburban train in Mumbai can carry around 5,000 people packed like sardines in the net of a fisherman who has had the best catch of his life. All it takes is just one infected patient for hundreds of hotspots to bloom. Until a vaccine, that means fundamental changes in commuting. Those who have no alternative will take the risk, but large corporations will have to arrange for transport, a cost they will find too high when the alternative is to just allow people to work from home.

Think also of the amount of travel white collar employees engage in—a division head going on cursory rounds to branches under him, conferences, offsite training sessions, etcetera—and which is no longer possible. Many of these activities are being replaced by a simple video conferencing app like Zoom, which to any business costs a drop if travel expenses were an ocean. So long as such travel seemed an essential element of work, companies spent on it. But when it has been shown redundant, why would business travel return to a world of recession even when lockdowns end?

Amitabh Kant, the Niti Aayog CEO, recently wrote an article in The Economic Times on the implications of the ‘Work From Home’ (WFH) culture listing first the reasons why it is possible now—‘availability of high-speed, low-cost internet coverage, and increased usage of data-sharing and communication apps that could ensure keeping communication streams and managerial collaboration intact. WFH would reduce time spent on commuting, enhance productivity and improve work-life balance.’ One benefit he emphasised on was women, who constitute 26 per cent of the labour in India, participating more in the workforce if working from home became normalised. An area he believed it would really impact was medicine. With shortage of doctors in India, telemedicine, or ‘virtual consultations’ would reduce overcrowding of hospitals while also reaching more patients.

Government policy is also forced to address the new realities of work. Piramal Industries, a blue chip conglomerate, had to cancel its board meeting recently because its directors couldn’t fly to Mumbai, some from across the world. Since international flights won’t resume for months, they will inevitably have to do it over videoconferencing at some point. Until now, it was not even legally permitted for a board meetings to happen without physical presence. But the Ministry of Company Affairs last month allowed it. A Mint newspaper article reporting on it said, ‘In a notification, the ministry of corporate affairs [MCA] said it has relaxed the requirements of holding board meetings requiring physical presence of directors till 30 June. “Considering need to take precautionary steps to overcome the outbreak of the coronavirus [Covid-19], the government has in-principle decided to relax the requirement of holding board meetings with physical presence of directors,” the MCA said in its notice.’ 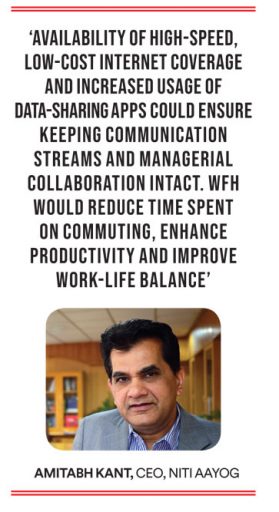 Video conference was always a convenient and cheaper option and there is really nothing in a board meeting that needs physical presence. But laws ossify and it takes effort to change them. The lockdown forced it. Now that the box has been opened, disallowing videoconferencing once the pandemic ends would make no sense. Even the judiciary has been forced now to accept entire judicial processes happening over video in cases. If the lockdown is long enough, litigants who have had to come to court across long distances merely to hear extension of dates, will hope it becomes a habit.

Writing for the Observer Research Foundation, Rishi Agrawal, co-founder and CEO of Avantis RegTech, pointed out that there is a lot of government action still remaining for working from home’s legality. He wrote, ‘As the new reality dawns and evolves into more mature telecommuting models, India’s legacy labour laws and proposed Labour Codes stay silent on the subject. They do not recognise work from home as a viable work arrangement.’ In the list of all the paperwork related to labour that companies have to fulfil, there were ‘416 Labour Laws and Rules between Centre, States and Union Territories leading to 278 different filings and approximately 1,000 different formats of Registers. An organisation is required to maintain statutory records under various acts, such as Shops and Establishment Act, Minimum Wages Act, Payment of Wages Act, Equal Remuneration Act, Payment of Bonus Act, Factories Act and Contract Labour Regulation and Abolition Act. These laws regulate hours of work, payment of wages, leaves, holidays, terms of service and other conditions of work of persons employed. All of these leads to applicability of statutory records such as Muster Rolls, Wage Registers, Leave and Attendance Registers, and Overtime Registers, either physically or electronically. However, they assume that an employee has a fixed geography of work and does not account for an employee working from a remote location. Our Labour Codes should make provisions for new ways of recording leave and attendance, hours of work, among others. They should rationalise and simplify the need for maintaining records in multiple formats.’

To expect radical change to happen in this ocean of regulation would have been impossible until a few weeks ago. But, with few alternatives on the horizon, the miracle will most probably happen. On Wednesday, the home ministry released its National Directives for Covid-19 Management, guidelines for the immediate future. The ones that dealt with the offices and workforce included: ‘Work places shall have a gap of one hour between shifts and will stagger the lunch breaks of staff, to ensure social distancing; Persons above 65 years of age and persons with co-morbidities and parents of children below the age of 5 may be encouraged to work from home; Special transportation vehicles to be arranged without dependence of public transport and these vehicles to have only 30 to 40 percent passengers; Medical insurance for workers to be made mandatory; Large gatherings or meetings of more than 10 people to be prohibited and a distance of 6 feet to be maintained for all gatherings; Not more than 2 to 4 persons in lifts and use of staircase to be encouraged; Total ban on nonessential visitors at sites.’

As with all government orders, they are comprehensive in detail but vague on execution or practicality. It does offer a peek into a post-pandemic workplace of the future. Personal space, so far, had been the reward for being at the highest levels of an organisation. Covid-19 has ensured an upending of that perk at least.