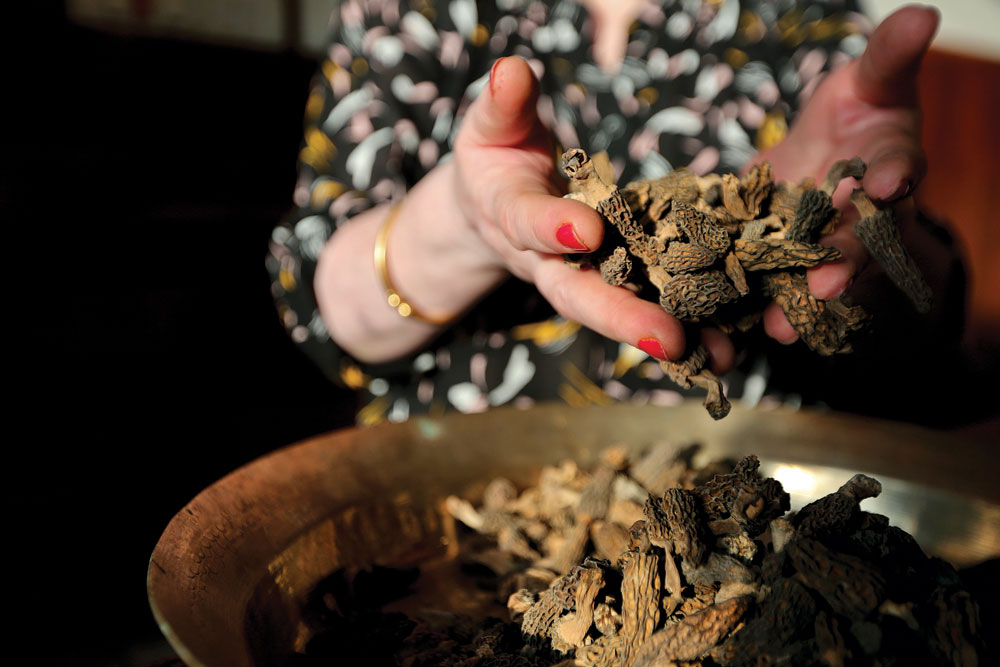 Gucchis being checked at Matamaal in Gurugram ( Photo: Ashish Sharma)


THEY SAY YOU never forget your first time. And so it is for Sanjeev Chauhan. A resident of Kotkhai in Himachal Pradesh, Chauhan, now 37, still remembers the first time he went foraging for gucchi. “I was in my early teens. It had rained the night before and we set off early in the morning. I was very excited but gucchi foraging is not child’s play. You need to know the area, how to spot them and, more importantly, you have to have one eye out for wildlife as we are talking about the upper ranges of the mountains. And there is no guarantee you will find any. In fact, you can spend hours and return empty-handed. A gucchi harvest has always been and continues to be a matter of sheer luck.”

At first glance, the edible morel, Morchella esculenta, can seem rather underwhelming. A perfectly formed piece has a conical head, with a honeycomb-like appearance and a short stem. But first impressions can be misleading. Packed with flavour and nutrients, gucchi is one of the most expensive ingredients in cooking. It fetches ₹ 15,000-20,000 a kg on the wholesale market and  ₹ 35,000-40,000 on the retail market. “This right here is more expensive than gold,” says Nalini Sadhu, the owner-chef at Matamaal, a Kashmiri restaurant in Gurugram, as she spreads a handful of morels on the table. Though dry, they must be handled with care, as the stem is delicate enough to separate from the head. A big part of gucchi’s appeal stems from its distinctive appearance.

Gucchi is usually found at the foothills of the Himalayas, across parts of Kashmir, Himachal Pradesh and Uttarakhand. It grows wild and foraging for it is replete with uncertainty and some amount of danger. But it is the morel’s elusive nature that makes it a rare commodity. When fresh, the morel is a deep dark brown, often difficult to spot in the wild undergrowth and the damp soil—its preferred home. “The morel only grows wild. Attempts to cultivate it haven’t worked out at all. And there is no knowing where you will find them. On a good day of foraging, you can come back with half a kilo and on bad days with none at all. It is this element of uncertainty and whimsy that makes the morel so sought after,” says Sadhu.

Morels grow in March and April and, according to legend, require thunder and lightning to sprout. Shepherds and villagers forage for them, but the activity, much like truffle-hunting, is shrouded in secrecy. Food writer Marryam H Reshii went on a gucchi hunt in Kupwara, Kashmir, a few years ago and recalls the group she accompanied started out early morning. “We met a few people on our way uphill and we did not tell them where we were headed, neither did they tell us. And if you manage to forage, you never mention where you found them.” According to her, foraging requires years of experience, enabling you to read the ground and know where to look. Once collected, gucchis are brought home and sundried. This must be done immediately, as the shelf life of a morel is less than a week. These dried guchchis then make their way to the wholesale market, and from there to restaurants and eventually onto your plate, provided you have the cash.

On paper, the morel trade is tightly controlled, with tenders floated and bid for. Local dealers buy it from foragers, who in turn should have permission from the forest department. A transaction involving two kg or more can only happen through authorised dealers. While foragers are aware of the value of gucchi, it is the middlemen who help sell it for an arm and a leg. A new practice of grading gucchi has now been introduced and the price is fixed according to quality. “The grading system is almost like a stock exchange. So depending on the produce, pricing is decided by almost a cartel of traders,” says Chef Prateek Sadhu of Masque, Mumbai. Sadhu has singlehandedly paved the way for morel in fine dining in forms far beyond those explored in traditional recipes.

“The buying of gucchis is as much a matter of expertise as the foraging of it is. Foraging requires physical labour; buying and selling require mental acumen to the point of cunning,” says Chauhan. The trader must make sure that gucchis are dried completely and their weight is not inflated. “If even a fraction of the stem of one gucchi is damp, it has the potential to wreck the entire hoard. You have to also ensure there are no pebbles in the pits and grooves of its head, a common trick to increase the weight.” Chauhan’s father has been in this trade for over 40 years, with Chauhan accompanying him on foraging trips since childhood. He claims he can guess their weight and quality by just eyeballing a hoard of gucchis. “I also carry a small paring knife with me which I use to slice off a tiny bit to determine the taste,” he says. The Chauhans trade in the Ganj bazaar mandi of Shimla, not very eager to venture into the bigger markets as “this trade is built entirely on trust”.

Chefs generally gravitate towards evenly sized morels, says Reshii. “There has to be symmetry since we first eat with our eyes. So, if the dish being prepared is a gucchi , you can’t have bits of morels. Each piece must be plump and whole and there must be plenty to stand out amidst the grains of rice.” Kashmiris have traditionally used morels in yakhnis and pulao. In Himachal Pradesh, even today, a wedding feast where a gucchi pulao is served is a talking point. “People will approach me, asking me to get them a kilo of gucchi for a wedding banquet and I have to dissuade them. A kilo is not going to be enough and it is foolhardy to spend that kind of money on just one dish if you don’t have that kind of disposable income,” says Chauhan. 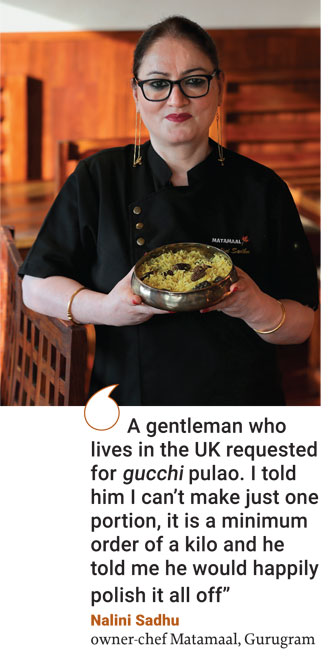 The menu at Matamaal does not list gucchi dishes. Nalini cooks only on order and most of her customers are expat Kashmiris looking for a taste of home. “Just the other day a gentleman who lives in the UK called and requested for gucchi pulao. I told him I can’t make just one portion, it is a minimum order of a kilo and he told me he would happily polish it all off.” Despite its tiny size and unassuming looks, the morel is packed with flavour that shines best when it is the star ingredient. Earthy, nutty, umami are just some ways used to describe its taste. Sadhu’s pulao recipe involves sautéing the rehydrated mushrooms in ghee before being cooked in rice seasoned with a dash of cardamom and saffron-soaked milk. The pulao she serves is almost a symphony of flavours as the ingredients work in harmony with each other. Cooking the morel requires minimal effort; it is the cleaning that is the true test of a chef’s skills. Reshii says she has lost count of the high-profile marketing spiels she has been subjected to only to be served gritty morels. “The cleaning of it is a very basic but delicate process which involves soaking and straining it without impacting the structural integrity of the morel.”

Luxury ingredients like saffron and truffles are markers of not just great taste but also the ability to afford said taste. But at what point does the reputation overwhelm the ingredient? Is a morel pulao consumed because the dish feeds the soul or because it features an expensive ingredient? Chef Prateek Sadhu believes that a bit of aura-building around special ingredients is important especially when we consider the logistics that go into a restaurant’s acquiring it. In the 11 years that Sadhu has run Masque, morel is the one ingredient that has not gone off its famous 10-course chef’s tasting menu. It shows up in avatars as interesting as a savoury ice-cream served with a broth and a morel miso rice. A tasting course at Masque costs upwards of ₹ 4,500 including taxes for one person and Sadhu says when a customer is paying that amount, they want to see its worth on the plate. “You are eating something which is not easily available and is hyper-regional. It is labour-intensive and its presence on the menu drives the value.”

While Kashmiris and connoisseurs with deep pockets have been eating morels for a long time, the general public has become aware of it only over the past few years, fuelled by the restaurant and regional-cuisine boom in India. Haji Amin of Amin Bin Khalik, a leading wholesale dealer of Kashmiri produce in Srinagar, recalls a time when morels were all but exported. “Europeans used to love them and would ask for them. For locals, however, morels were like walnut kernels; no one was interested in buying them. Now we see a fair amount of demand from across India. It is for small amounts but there is curiosity.” It also helps that gucchi is renowned for its nutritional value as a source of potassium, copper and antioxidants.

In January, the Jammu & Kashmir government submitted a GI tag application for the gucchi produced in the Doda district through Borderless World Foundation, an NGO with deep roots in Kashmir. Adhik Kadam, the chairman of the NGO, believes that more than the consumer, the GI tag will help the forager, who gets a pittance for his work compared with the value the morel eventually fetches. “I am also hopeful that the produce of Kashmir, be it saffron or gucchi, can help build a bridge between the state and the rest of the country.”

Food writer Pushpesh Pant adds a note of caution as gucchi is still not an ingredient even upper-middle-class families include on their grocery list. “Gucchi, like saffron, is only available to those who can pay the price. The price tag of `30,000 a kilo is eye-popping, but even 10 grammes goes a long way.”