Hathras and the Politics of Denial

In the country she lived, it was her life, lower and insignificant, that was the crime waiting to be punished 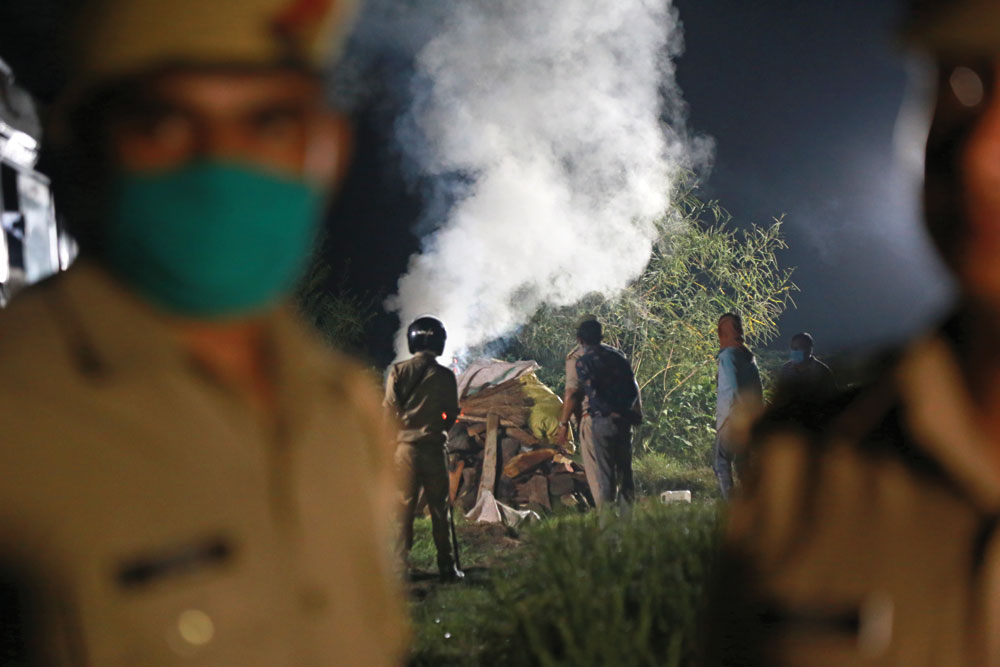 
THE STORY HATHRAS tells is a familiar one India has learned to live with, and the shame of which lasts as long as the headlines do, just that. The story carries within it the many strands of brutalisation that makes our modernisation project incompatible with civility. The Dalit girl who was killed, and then hurriedly cremated by the police, is a victim without a name; her anonymity is a shield we think will protect her from further humiliations, and give her an illusion of dignity she was denied while alive in a village without mercies. Her anonymity also adds to the abstraction of terms that have already lost their urgency. Terms such as ‘crimes against women’ and ‘attacks on Dalits’. Hathras, even as it gains resonance as a widely shared media invocation, too, is veiled in anonymity, leaving the horrors inflicted on the girl to our imagination. The multiple narratives of Hathras, told by the state and the media, do not clarify anything. What still stand out in stark relief are: the police that behaved as if they had something to hide in the immediate aftermath of the crime; a state government without empathy turning the crime into political victimhood; and competitive ownership of the Dalit cause. What lies orphaned outside the spectacle of outrage and counter-accusations is the personal tragedy of the girl in a place where everything, from the dehumanising sociology of the village to the violent masculinity of a political culture to the inherited stigmatisation of caste, was set against her. In the country she lived, it was her life, lower and insignificant, that was the crime waiting to be punished.

Evasion is the method we use to protect us from such horror stories—stories that linger for a while; and our scarred conscience is quick to recover from their recurrence. The post-Hathras conversation, even as it bares the fragility of our moral edifice, goes in many directions: the state still lacks the humility to acknowledge that the police bungled badly in the beginning; the political parties, suddenly more pro-Dalit than the other, find the first draft of a useful slogan in the death of an ‘outcaste’; and the alertness of a section of the professional protest community to trace the roots of Hathras to Hindu nationalism and its ascent to power. And a mea culpa: the media has not helped. Some good old-fashioned reportage would have served the purpose instead of a profusion of easy judgments.

The leitmotif in these retellings of Hathras is the power of denial. In their book The Politics of Denial, Michael A Milburn and Sheree D Conrad, both political psychologists, provide a definition: “Denial, a psychological defence mechanism, is an unconscious mental manoeuvre that cancels out or obscures painful reality. We hear no evil, see no evil, and hence feel no pain or confusion. We don’t have to confront or change things that don’t exist; we don’t have to examine our motives, intentions, and actions, or those of our government.” Denial is a painkiller and a memory eraser. It makes the inconveniences of reality disappear and builds in its place a life-enhancing mythology. It enables the political class to shut itself from ‘evil’. As Milburn and Conrad write, “nations operate on the basis of shared reconstructions of reality.” The politics of denial is about the construction of an alternative reality. Both the Right and the Left are in it together. The radical Right, in its loftier sense of nationhood, demands cultural homogenisation, which makes a category of undesirables inevitable. In the restoration of glory, the purest of nationalists dread the dissenter. It becomes a project in hate. The Left needs the ghettos—if there is none, create one—to play out identity politics. The world out there is an indexed collection of victims, and the politics of grievance, institutionalised by the Left, cannot be sustained without more of them. Both the Left and the Right manipulate reality through denial. Evil is the other.

Hathras Retold is a perfect passage in denial. Every headline, every placard, every indictment, is an attempt to create a suitable reality out of a terrifying truth. No matter how much you may quote from Ambedkar’s Annihilation of Caste, caste is still the evil that powers the bloodlust of the Indian countryside. Not annihilation, but its perpetuation is what politics, from both sides of the aisle, is struggling to achieve. In the brute mathematics of caste politics, a murdered Dalit girl is an unpleasant statistic. In Hathras, some want to wish away this reality by transferring the blame; some want to capitalise on it by staging simulated schmaltz; and some others want to turn it into a moral offensive against the ruling party. The politics of denial makes it possible, and justice is not one of the possibilities of an erased reality. Maybe anonymity is the only solace the girl from Hathras, like many before and after her, will get, in death as in life.