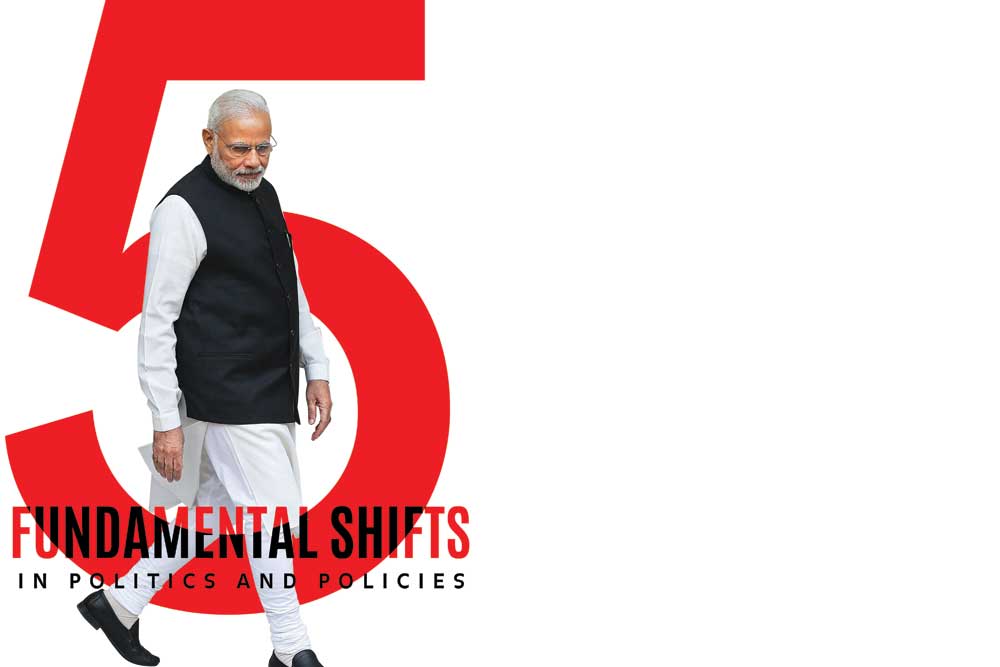 THE NOISE IS SO SHRILL THAT WE MISS THE STIRRINGS OF history. The political theatre is so spectacular that we miss the quiet reshaping of the national order. Instinctively, we deploy our choicest adjectives to further darken our bogeymen, to play out our ideological peeves. So, in the arena, we see the progressives wailing over the dismantling of the liberal edifice, and the rise of unhinged subversives—Brexit there, Trumpism across the ocean, populists elsewhere, and at home, the terrifying popularity of a prime minister who is lost in his own aura. We argue in the next few pages that the Indian story, in its narrative frisson and thematic audacity, is much bigger than what the progressive lament makes it out to be. The iconography of the India of the day before has been replaced by the more authentic art of individual affinity and nationalist self-esteem. Secularism is not enforced communal ghettoisation, any longer. Nor is it a case of one community being allowed to relegate itself to theological archaisms. Secularism is shared humanity; it’s not yet another soulless ism kept alive by a condescending state and a ruthless clergy. This Government’s determination to end the tyranny of triple talaq is a humanitarian offensive against anti-secularism as well as anti-feminism. It’s also an affirmation of the principle any civilised state should respect: religion is not so much about the infallibility of gods as it is about the dignity of human beings. This is a significant step towards the eventual demolition of the old golems constructed by a manipulative state. It fits the Modi pattern: A strong state, or a strong leader, should stick to principles. It requires a belief system compatible with constitutionalism and civility. National security is sacred, and this Government has repeatedly proven it, whether it was the surgical strike yesterday or the refocused Kashmir agenda today. With a no-nonsense home minister in Delhi, the state has begun to show a new sense of purpose in a Valley that was for long caught between jihad and administrative confusion. In Modi’s India, the nation is an idea about which you can’t afford to be tentative. It’s not a confrontation between the terror of Islamism and the extra-constitutional terror of the state, and it should not be so. It’s about a state that stands up to forces that don’t recognise its legitimacy. The new Indian order is built on a greater sense of national interest and administrative ethics. The man who presides over it loves it more when the Resistance misses the point: what he has unleashed is larger than him—and irreversible.