They offer certainties in mathematics and physics but for pandemics, they don’t offer much help in predicting the future 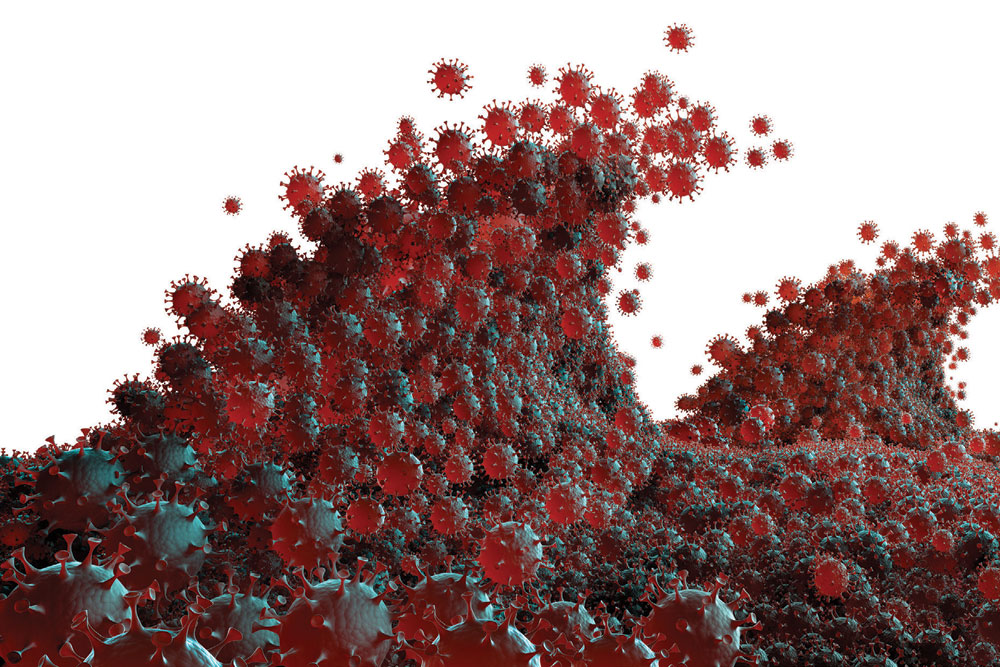 
IF TOMORROW YOU decide to live in a world without waves, even if for a millisecond, it is not going to happen. They are everywhere and always, in and around you. Take light. It is made of photons. For a long time, scientists believed that these were particles, like say an atom. But later, they found that it was a wave. Then they realised that it was both. The point here being that a wave is as important as an element in our understanding of the world. The universe’s essence is not just substance, but also movement. Gravity, the reason you don’t fly off into the air, is a wave. When you hear something, it is because of a sound wave reaching you. You see waves when you stand on Juhu beach and look at the sea. You drop a pebble into the Yamuna and there is a wave formed. These are mechanical waves in which a medium is required. Try screaming your heart out in a vacuum and you won’t hear yourself because sound needs air (or any medium) to jitter as it goes. But then there are others, like electromagnetic waves, which can go through vacuum and need no medium. But those fall into the abstruseness of physics and mathematics. A pandemic, in which a wave is a feature, like Covid, definitely needs a medium and we know this because we are the medium. The movement of the disease is happening through human beings and the amplitude of the wave, its highest point, is when the number of infected people peaks. As the numbers decrease, the wave reduces in frequency until it again unfolds upwards. All of it would be sound if this was precisely how it happened. And it would be of great help to us because we could then manipulate it to change the nature of the wave. Unfortunately, while waves in the domain of physics and mathematics are predictable, with Covid it is anything but. Mathematicians might make models on how the Covid wave will progress, but a model is just a simplification of the complexity. At most, it can only provide direction but has scant predictive value. It might strike the bullseye, but you only know for certain later. And any policy that relies on modelling can boomerang, as lockdowns have shown in their inability to contain the pandemic in most countries.

The past is of not much help about the future trajectory of pandemics. Because human societies, unlike ants or bees, rarely conform to set patterns. Countries like New Zealand can be wavefree (as of now), but others like the US can see multiple waves, while still others like India can think that there is something that made them immune to waves after the first burst and then got clobbered with a monstrous second one. What does history tell us about waves and pandemics? The big precedent is the Spanish Flu, the worst pandemic to hit humanity and might have killed tens of millions. The US’ Centers for Disease Control and Prevention has this to say about it on its website: “There were 3 different waves of illness during the pandemic, starting in March 1918 and subsiding by summer of 1919. The pandemic peaked in the U.S. during the second wave, in the fall of 1918. This highly fatal second wave was responsible for most of the U.S. deaths attributed to the pandemic. A third wave of illness occurred during the winter and spring of 1919, adding to the pandemic death toll. The third wave of the pandemic subsided during the summer of 1919.” The chart of its wave was one big peak between two smaller ones. But note that its entire course spans just over a year. Covid is already past that timeline. There is no reason to feel any hope from the Spanish Flu’s trajectory because that was also a time when lockdowns were local and, forget about vaccines, they didn’t even know it was a virus. It was left free to go through the world until human beings who survived got immunity from already being exposed to the disease.

Lockdowns and vaccines, especially since we know now that they don’t stop the transmission of Covid, can stretch the pandemic for a long time as new variants find ample space to spread through the gateways that, ironically, prevention measures have left open for them. The good side is that vastly more lives have been saved as against the Spanish Flu. On the other hand, as long as the pandemic continues, the prevention measures will lead to economic collapse, whose toll is not quantifiable. You don’t know how many died as a consequence of stress, deprivation and inattention to other diseases. Covid could be not three peaks on a chart but a never-ending series of small peaks until a silver bullet, the vaccine that gives complete immunity from all present and future variants and also stops transmission, is found.


Covid could be not three peaks on a chart, but a never-ending series of small peaks until a silver bullet, the vaccine that gives complete immunity from all present and future variants and also stops transmission, is found

Last April, in the middle of the first wave, two scientists, Tom Jefferson and Carl Heneghan, wrote an article in Oxford University’s the Centre for Evidence-Based Medicine website on the possibility of second or third waves based on the trajectory of earlier pandemics. They listed out 10 pandemics since 1889. Eight of them were influenza viruses, and two coronaviruses. They noted: “The last five outbreaks, since 1957-58, occurred in the space of two years; five outbreaks are described as having a second phase; 2009-10 had two mild phases; 2002-2003 had several phases that occurred within one year; 1957-58 had two phases that were equally severe; 1889-92 and 1918-20 had two phases with the latter being described as more severe.” How a particular pandemic progressed seemed unconnected to what had transpired earlier.

They also questioned the imagery of a wave for a pandemic, at least for influenza viruses, and wrote: “It has been suggested that previous pandemics are characterized by waves of activity spread over months. However, there is inconsistent evidence of such patterns across all of these eight influenza epidemics and pandemics. As they go on to quickly exhibit seasonality in the ensuing years and along with other acute respiratory viruses tend to favour seasonal cold-weather patterns of circulation. ‘Waves’ imply a lack of viral circulation which is probably an illusion. It is possible that some of the secondary ‘waves’ or phases were caused or favoured by co-circulation of other microorganisms. Waves are also visible and mostly rhythmical. There does not appear to be any pattern or rhythm to the epidemics summarised in the table and their comings and goings are only visible because of the effects on the human body and their impact on society.” They added that coronaviruses are a different category from influenza viruses and even though they had shown seasonality pattern, with Covid there seems to be little connection between its spread and any temperature bands.

There is the curious irony even in India that states which are efficient see the pandemic drag on longer because they have managed to fend off a larger percentage of the population from being infected. Kerala, which has the best healthcare in the country, is also the state with the lowest population of Covid antibodies as per the recent Indian Council of Medical Research (ICMR) serosurvey. Its cases never rose as steeply in the second wave as the rest of India, but it didn’t drop almost to nothing later either. It continues with a steady rate of infections with occasional small spikes, leading some to speculate it is on the brink of a third wave. A wave in a pandemic is also a matter of interpretation or, even, opinion because you see strongly polarised political views on how a state is doing depending on ideology. A Bharatiya Janata Party or Communist Party of India (Marxist) supporter will find it hard to look at a chart that shows the wave of a tsunami and disagree on the information it is providing. But they can do so when it comes to Covid.

On August 30th, according to an ANI report, ICMR’s head of epidemiology, Samiran Panda, said that signals of a third wave are coming from states where the second wave had not been that intense. He was quoted saying: “Several states began imposing Covid-19 restrictions and increased vaccinations, learning from Delhi and Maharashtra. Due to this, the second wave in several states was not as intense, leaving scope for a third wave. Therefore, the increasing number of Covid-19 infections in some states presently is indicating a third wave. Every state should look into their number of Covid-19 infections and its intensity in both the first and the second wave of the pandemic to decide about their strategy/pandemic preparedness for the possibility of the third wave.” But it also begs the question that if you prepared well for a third wave as per his advice, then you would again “leave scope” for a fourth wave.