The Revenge of the Underclass 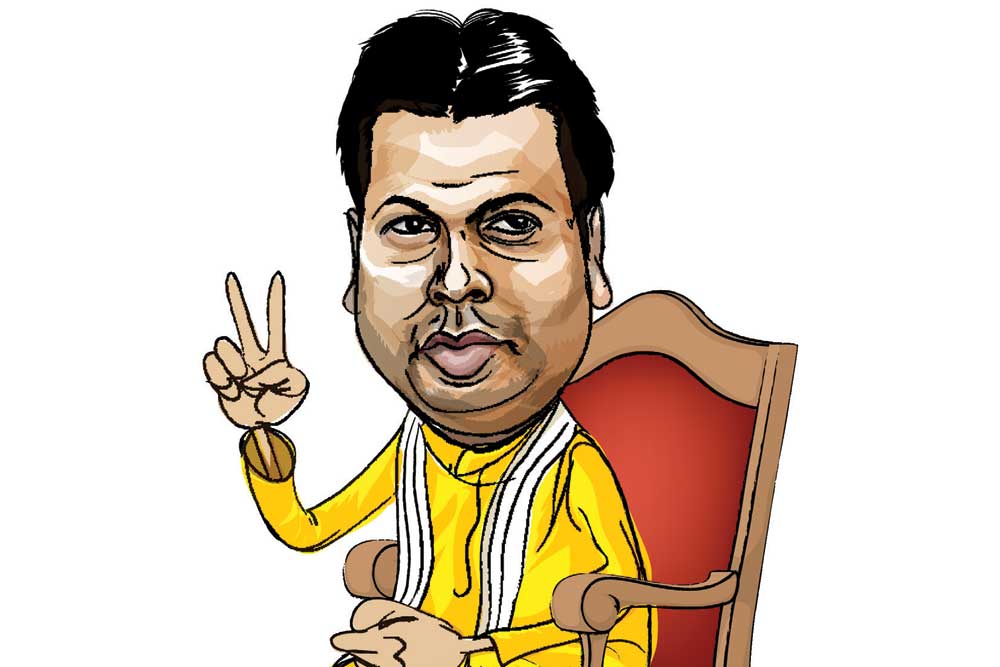 IN 1979, A young man made an eight-hour journey in a jeep drawing a trailer crammed with over 20 people to a tribal village 30 km from Agartala. A full-time worker of the RSS-affiliated Vanvasi Kalyan Ashram, Piyush Bhattacharjee had been sent there on a mission to run a hostel and open channels of communication with the area’s Tribals. “We did social work and spoke of Hindutva,” says Bhattacharjee, “but never touched the subject of politics.” The Left Front government of Tripura had amended the Official Language Act that year to include Kokborok, spoken by Tribals, as an official language; the state Assembly had also unanimously passed the Tripura Tribal Areas Autonomous District Council Bill, an idea proposed by Marxist Nripen Chakraborty, who was Chief Minister at the time. Though a non-Tribal himself, the Marxist leader had won the trust of the state’s aboriginal people, having started working with them in the 1950s and earning the Left their electoral support that would put him in power for a decade after his party’s 1978 win and lay the ground for later Communist victories.

Also a non-Tribal, Bhattacharjee had joined the RSS as an eight- year-old boy in 1952, two years after the Sangh began its Tripura outreach; along with others of the Vanvasi Kalyan Ashram and RSS workers, he learnt Kokborok and ate at their homes, slowly spreading their influence in a state where their ideological opponents held sway. Decades later, in 2015, a former RSS man sent to Tripura as BJP’s state prabhari (leader in charge) called Sunil Deodhar began a similar exercise. He would cycle to Tribal villages along with local youngsters in an effort to strike a chord with the poor. He would eat with locals in their homes and speak to them in Bengali and a smattering of the local tongue that the Maharashtrian leader had picked up. “I don’t know if Deodhar is a vegetarian or a non-vegetarian, but he ate what was offered to him in Tribal homes,” says Bhattacharjee. In the polls held two years earlier in the country’s third smallest state, the BJP had got only 1.5 per cent of the popular vote, a share that rose to 5.7 per cent in the General Election of 2014.

From that, the BJP share has risen to 43 per cent, thanks to a vast tribal turnout in the party’s favour. “In two years,” says Deodhar, “we reduced the Communists to two Scheduled Tribe seats.” The Left held 19 of the 20 reserved Assembly constituencies in the state. This time, the BJP-led alliance won 17 of the 19 reserved ST seats where elections were held. This is the result of a dedicated programme to woo them, including its alignment with the Indigenous People’s Front of Tripura (IPFT). Tribals, who constitute a third of the state’s population, have taken an unprecedented turn from the Left to the Right. While the CPM’s vote share was a shade lower than the BJP’s, the IPFT, which fought nine of the 60 seats, got 7.5 per cent of the votes polled.

Biplab Kumar Deb, a Bengali like his CPM predecessors, returned to Tripura three years ago on the advice of his mentors. Little did he expect his Sangh work to lead him to his home state’s top job

With such a resounding victory, it was perhaps natural that the BJP would be faced with the same dilemma that the Left was: the demand for a Tribal Chief Minister. “The CPM did not give us one in the past 20 years,” says IPFT’s Shukla Navatia. “BJP leaders wore traditional scarves from the Northeast in Parliament,” he adds, “If BJP had agreed to a Tribal Chief Minister, it would have given respect to Tribals.”

The state’s only Tribal holder of that post so far has been the CPM’s Dasarath Deb (in power from 1993 to 1998) of the Debbarma tribe. The BJP’s Biplab Kumar Deb, 46, is a Bengali, like his CPM predecessors Manik Sarkar and Chakraborty. A former RSS worker, Deb had returned to Tripura on the advice of his mentors— Deodhar among them—to work for the party three years ago. “I knew I will not get a job [here under] this Communist regime, so I had left Tripura and gone to Delhi in 1998,” says Deb, who too had joined the RSS as a child. Little did he expect his Sangh work to lead him to his home state’s top job. In Delhi, he had first lived in Jhandewalan, the RSS headquarters. He then moved to 11 Ashoka Road, the BJP headquarters till recently, and worked as an assistant to KN Govindacharya, who was a party general secretary. Later, Deb was part of the personal staff of Union Minister Rita Verma, till 2004, a period in which he met his wife Niti, an officer at the State Bank of India’s Parliament branch who took a long leave from work to accompany him on the campaign trail in Tripura. “I am young. I have no experience, but I am bringing smiles instead of fear on the people’s faces,” says Deb.

Deb, who was the BJP’s state president, had identified his priorities right from the start. Learning from what he saw as mistakes of the CPM-led Left Front, Deb says he is determined to ensure law and order in the state without political interference. He will set up a panel to look at employment opportunities, implement the Seventh Pay Commission’s scales for public-sector salaries, improve the quality of education, enhance healthcare facilities and work for the upliftment of those in deprivation. The only cloud over his victory rally in Banamalipur, his constituency in Agartala, was the IPFT’s demand for a Tribal heading the state government. After a series of meetings, it was later decided that Jishnu Debbarma of the dominant Debbarma tribe and royal family of Tripura, will be Deputy Chief Minister. The dust had barely settled over this when another shadow was cast on the victory by the vandalism of a Lenin statue in Belonia, southern Tripura.

In 2015, Sunil Deodhar began an exercise to enlist Tribal support for the BJP in Tripura. He would cycle to villages along with local youngsters in an effort to strike a chord with the poor. This helped sway their allegiance from the Left to the Right

Bhattacharjee says Tribals understand that the BJP will factor in their development concerns and the IPFT is unlikely to persist with its demand for a separate ‘Twipraland’ carved out of Tripura, but the chief ministership issue was well within the political domain. Meeting the expectations of an unfamiliar electorate will call for other measures of empowerment as well. “We are putting in place a mechanism so that the Tribal Autonomous Council will get direct funding from the Centre,” says Deodhar, adding that the state needs to be financially strengthened after decades of CPM rule.

What has turned the Left’s long-held Tribal allegiance into sudden disenchantment, however, remains a matter of speculation. Prime Minister Modi’s appeal is an obvious factor. While watching the colourful sea of humanity gathered for a rally of his in Sonamura, the question that came to mind was whether people here had grown weary of Communist ideology or Manik Sarkar’s government or both. Either way, the electorate, particularly the youth, was clearly all set to give the BJP, already in power in three northeastern states, a chance to deliver on its promises of development.

Somewhere beyond Tribals and non-Tribals, atheists and Hindutva, there was another stirring that had gone unnoticed by the Manik Sarkar government, that of growing material aspirations

Driving through the serene hills and stopping by bamboo huts to chat with Tribals, one realises that somewhere beyond Tribals and non-Tribals, atheists and Hindutva, Lenin and Syama Prasad Mookerjee, there was another stirring that has gone unnoticed by the Left—that of growing material aspirations. Communists had been working in tribal areas even before Independence, particularly in the fields of education and health, and had backed organisations like the Janasiksha Samiti and later the Ganamukti Parishad, both formed to fight the repression of Tribals and bring about socio-economic reforms. After Partition, as Bengali refugees poured into the state, the Left tried to balance their rehabilitation with Tribal rights. The RSS, on the other hand, started in 1950 with seven shakhas in Agartala. By 1953, when RSS chief MS Golwalkar paid the state a visit, the Sangh had many more local branches; and by the early 1970s, it had representatives all over the state working on education and health, but an insurgency had restricted their space. Till 2018, RSS presence had failed to translate into votes for the BJP or its predecessor, the Jan Sangh. But three years ago, the BJP sensed a chance to replace the Congress as the Left’s main rival, and thus began the project to storm this red bastion. Deodhar’s confidence grew when he saw how fearlessly party workers were ready to take on CPM cadres, given the risk of political violence. He speaks in particular of the sufferings of three BJP women workers: a 70-year-old candidate of municipal polls who was left with a head injury by goons, a woman whose husband was killed and a pregnant party candidate who lost her baby in an attack. “They all fearlessly continued to work for the BJP after that,” says Deodhar. The BJP also ran an aggressive social media campaign from its war room, which has been active for the past two years. According to a party worker, Hindi-speaking BJP leaders managed to get Bengalis and Tribals listening to them on the same platform.

The challenge for the BJP now is to fulfill promises made to an electorate restless for better lives. And with three more Northeast states in the bag, the party will turn its attention to Mizoram and Sikkim. The former is a Christian majority state, while the latter has had Pawan Kumar Chamling of the Sikkim Democratic Front, which is part of the North East Democratic Alliance formed by the BJP, as its Chief Minister for 23 years. Tripura itself has two Lok Sabha seats, which the BJP expects to win in 2019. If it does, it would be another numerically small but politically significant victory.