The Price of Fame

Blatant abuse of power by men is not new in Mumbai cinema. Women who have spoken out have been silenced or sidelined 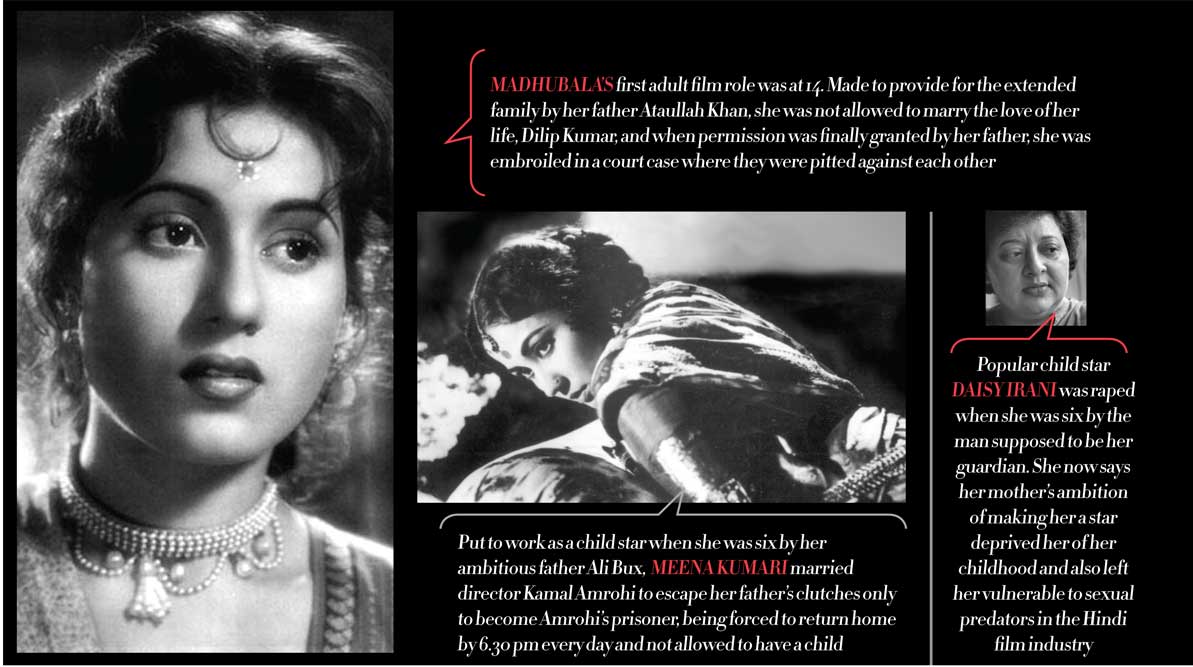 WHEN BELOVED CHILD STAR Daisy Irani revealed recently that she was raped as a six-year-old by a ‘guardian’ escorting her on a film set, hit with a belt and warned that she would be killed if she ever broke her silence, she was only reiterating Mumbai cinema’s ugliest truth. That some of the most dazzling beauties were exploited by their parents and seniors, set to work as children to provide for their families, and systematically let down by the men in their lives. Some of them are stoic survivors, having retreated into a world of gilded silence. Others died young, heartbroken, their minds and bodies unable to bear the punishment of never being enough.

They may not have had the vocabulary then, but these women whose presence still gives us unadulterated joy so many decades later were victims of powerful men who used their wards to build real estate empires, feed and fund extended families, and acquire influence much beyond their own limited talent.

Madhubala’s first adult film role was at 14. Made to provide for the extended family by her father Ataullah Khan, she was not allowed to marry the love of her life, Dilip Kumar, and when permission was finally granted by her father, she was embroiled in a court case where they were pitted against each other

Take Meena Kumari. Put to work as a child star when she was six by a father who nearly abandoned her at an orphanage, she tried to escape his clutches by marrying the much older Kamal Amrohi only to become his victim—as his third wife, she was not allowed to work beyond 6.30 in the evening, have anyone except his spy Baqar Ali in her make-up room or to have children. Retaliating with a string of well documented relationships, she was diagnosed with cirrhosis of liver in 1968, and died in 1972 at the age of 38, leaving a flat to Saawan Kumar Tak and all her diaries to Gulzar—in which according to Vinod Mehta’s Meena Kumari: The Classic Biography, ‘every single man and woman who has used Meena has been brought into the open’.

Or take Madhubala, again all of 14 when she starred opposite Raj Kapoor and her father Ataullah Khan’s cash cow. So much so that the only reason he agreed to a possible wedding with her longtime lover Dilip Kumar was that this star merger could help his production company. But when Kumar took a stand to support BR Chopra in the Naya Daur court case against her father, it meant the end of the relationship. Madhubala was the toast of Mumbai cinema, even sought after by Hollywood’s Frank Capra, but could never break free of the shackles of her family for whom she was the main provider. She died alone at 36 of ventricular septal defect.

Popular child star Daisy Irani was raped when she was six by the man supposed to be her guardian. She now says her mother’s ambition of making her a star deprived her of her childhood and also left her vulnerable to sexual predators in the Hindi film industry

The early female stars of Mumbai cinema were distinguished by their greedy guardians who thrust them into the spotlight whether or not they were mentally and physically prepared for it. In the absence of structures, propinquity often bred sexual relationships, with the men invariably being in positions of authority and offering protection. Take producer PN Arora who controlled Helen’s career, transforming her from a poverty-stricken refugee to iconic dancer. But as Jerry Pinto writes in Helen: The Life and Times of a Bollywood H-Bomb, when he finally ‘released his clutch on her, it was to leave her penniless, without work, and desperately in need of money. The industry folk, while sympathetic, preferred to ‘play safe’ and keep out of it.’

That studious distance from controversy continues till today with influential male icons maintaining silence on what is emerging as India’s MeToo moment, but media analyst Amit Khanna cautions that one must make a distinction between sexual harassment and failed relationships. Yes, pushing a child into an adult role is exploitation, but when Amrohi kept a watch on Meena Kumari, he was being a paranoid husband rather than a sexual predator, says Khanna, and when Ataullah Khan prevented Madhubala from marrying Dilip Kumar, he was being an avaricious businessman rather than an aggressor.

Put to work as a child star when she was six by her ambitious father Ali Bux, Meena Kumari married director Kamal Amrohi to escape her father’s clutches only to become Amrohi’s prisoner, being forced to return home by 6.30 pm every day and not allowed to have a child

Yet few can deny the unequal power dynamic in Bollywood that existed then and now. Except for a brief glorious period in the 1920s to the early 1940s when emancipated women such as Jaddanbai, Protima Dasgupta and Shobhana Samarth were paid more than their male counterparts, got all the advertising contracts, top billing in publicity and theatre marquees, ruled the gossip magazine industry, greenlit movies, and launched their star daughters/ relatives, women have suffered economically, socially and creatively. Women were often humiliated, given revealing costumes, double-meaning dialogues and crude dance steps. In Rekha: The Untold Story, Yasser Usman says the actress was molested on camera at 14, when her Anjana Safar (1969) co-star Biswajeet forcibly kissed her for over five minutes, even as the unit was ‘whistling and cheering’. More disgustingly, after the movie was released, she was labelled a ‘sex kitten willing to do bold scenes’ for a kiss she never consented to. Even a ‘serious’ actress like Smita Patil was not spared the crude demands of commercial cinema and reportedly wept when she came home from the shoot of the rain song Aaj Rapat Jaayen with Amitabh Bachchan in Namak Halaal in 1982.

IS IT ANY DIFFERENT FROM WHAT Tanushree Dutta is saying? That in 2008 a lewd dance step was introduced at the last minute in a song on the insistence of Nana Patekar, on the sets of Horn ‘OK’ Pleassss, so he could touch her inappropriately? The contrast is in the zeitgeist. When Aishwarya Rai issued a statement on April 6th, 2002, saying she could not work with Salman Khan for ‘obvious personal reasons and disturbing reasons’, a kind of instant amnesia made everyone forget the grave charges. Rai stated the ‘Salman chapter was a nightmare in my life and I am thankful to God that it is over’, but it is difficult to forget the hell the actor put her through on film set after set, causing her to lose work, most importantly the role that later went to Rani Mukerji in the Shah Rukh Khan-starrer Chalte Chalte. It must not have been easy for Rai to say more, but she did: ‘While I have maintained a dignified silence about him and his wrong-doings, he (his family and friends) has repeatedly attacked the respect, dignity and pride of me and my family (with irresponsible rumour-mongering). I stood by him enduring alcoholism, misbehaviour in worse phases and, in turn, I was at the receiving end of his abuse (verbal, physical, emotional), infidelity and indignity. That is why like any other self-respecting woman, and God is witness, I said ‘enough’ and ended it almost two years ago, but because of a dignified silence, all have misrepresented my stand and spread rumours about my character and baselessly alleged affairs and tried to spoil healthy working relations with co-stars.”

Forced to do leading lady roles at 13, Rekha has talked of being dragged from one studio to another. “Bombay was like a jungle, and I had walked in unarmed,” she told Simi Garewal in 2004, adding that “guys did try and take advantage of my vulnerability”

Women who speak up and stand up for themselves have to face the consequences—they did so at the time of Madhubala, and they do so now. Priyanka Chopra has admitted to having been thrown out of a movie and replaced by the actor or director’s girlfriend, an “abuse of power” over which she could not do anything since “I did not cater to the whims and fancies of powerful men”. Raveena Tandon has spoken to me of being dropped from four successive films because her male co-star’s girlfriend got jealous, causing the star to even deny knowing her, which she says is “ridiculous because everyone knew we went to the same college and were Juhu kids”. TV producer Vinta Nanda has revealed all about being sexually assaulted by actor Alok Nath, spurring actress Sandhya Mridul to narrate her truth as well.

Tejaswini Ganti, associate professor, New York University, says the film industry has always been regarded as a morally hazardous space for women, but contrasts the broader reaction to the revelations now with the response to the Shakti Kapoor casting couch scandal in 2004. “I remember how the print media seemed to find the Shakti Kapoor episode almost amusing in the sense that while the film industry was creating an uproar about how it was a respectable place and that Kapoor had slandered prominent producer/directors, which is why the Guild banned him temporarily— the general tone in the press was almost like ‘What does one expect? It’s the film industry; of course there’s a casting couch’,” Ganti says. Now, though, women are not willing to take sexual harassment as part of the price one pays or the hazards one has to face for being a part of the film industry. Now with a greater institutionalisation in terms of limited-liability and multinational film companies, there is a possibility (as well as expectation) of mechanisms for oversight and procedures for grievances.

Yet, the system could continue to fail women, as happened to the female crew member who came forward to accuse then Phantom Films partner and director of Queen Vikas Bahl of sexual assault. She complained to the company’s partners, including Anurag Kashyap, in 2015 when the incident happened, but they did nothing.

Phantom Films has been disbanded since and her testimony is being re-examined. The hope is that these once-isolated voices raised in unison will transform the culture of fear and intimidation that prevails in Mumbai cinema. Only then will India’s MeToo moment become a WeToo movement.

Me The People
The Female Lead
Rage Against the Machine