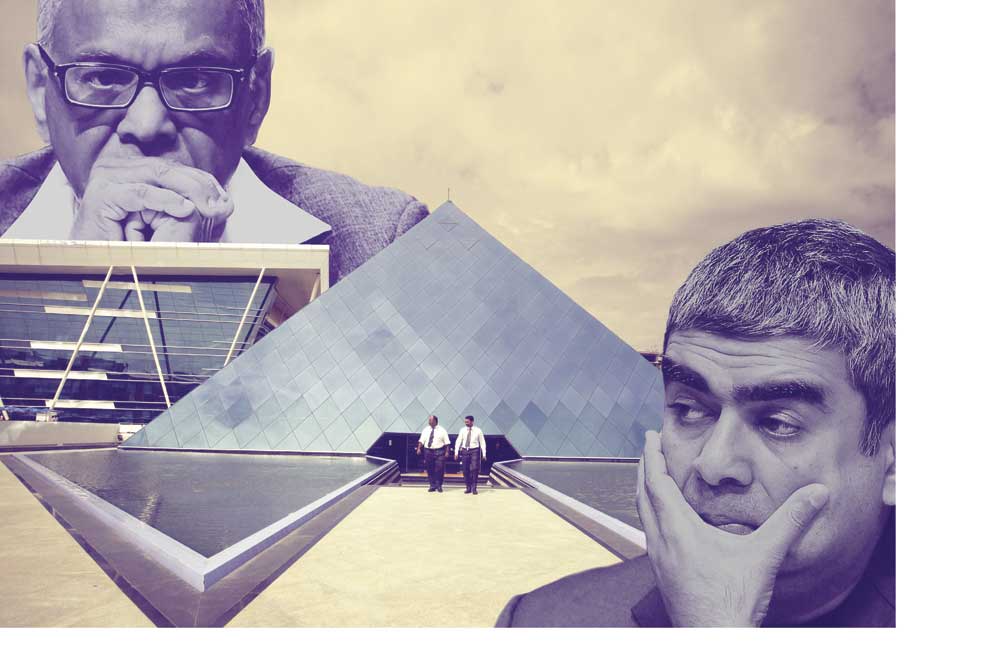 THE INTERMINABLE sprawl of the Infosys campus perched on the edge of Bengaluru has set many precedents. It was here that the idea of an IT park, with all the amenities we have come to associate with a career in software engineering, was born. When heads of state visit Infosys, they see reflected in its edgy architecture the power of Indians’ ambition and the fruits of their diligent toil. The Infosys campus is the most tangible symbol of the company’s striving to set standards— whether by becoming the first Indian IT firm to list on NASDAQ or by making millionaires of employees with its stock options scheme. Even as it rose to become a posterboy of India’s $150 billion IT outsourcing industry, Infosys earned a reputation as one of its most ethical corporations, with its founders laying down best practices in corporate disclosure and governance as well as leading frugal lifestyles on the personal front. It is these implacably lofty ideals, and the challenge of living up to them, that are proving to be a public relations nightmare for the company as it finds itself drawn into a controversy seemingly about salaries and severance pay.

The truth is, Infosys is caught in a clash of values between a conservative promoter and a jet-setting CEO from Silicon Valley. When Infosys co-founder and former Chairman NR Narayana Murthy, widely regarded as a beacon of virtue in corporate India, spoke of “distressing” governance lapses at the company, it kindled fears that the simmering differences between him and the Board would devolve into a damaging battle a la Tata Sons and Cyrus Mistry. The flashpoints were a severance package of 30 months’ salary, amounting to over Rs 17 crore, that the Board had agreed to pay former CFO Rajiv Bansal upon his exit in October 2015, and 49-year-old CEO Vishal Sikka’s $11 million-a-year compensation. In Murthy’s unforgiving eyes, Bansal’s exorbitant severance pay was a sign of foul play and Sikka’s revised remuneration—up from $7.08 million in 2016, a 55 per cent increase that is at odds with the average single- digit salary hikes at the company—showed blatant disregard for Infosys’ brand of compassionate capitalism. Murthy’s two-pronged attack was flawed, however, for it not only gave credence to speculation that Bansal had been shown the door for questioning Infosys’ $200-million acquisition of Israeli software company Panaya in February 2015 (the valuation was vetted by Deutsche Bank and independent finance professionals), but also suggested that he no longer approved of a CEO of his own choosing, a respected technologist and former SAP CTO. Meanwhile, the side-stepped contenders for the CEO’s chair at Infosys, former CFOs TV Mohandas Pai and V Balakrishnan, have attributed the apparent dilution of Infoscian values to Narayana Murthy’s failure to groom leaders.

The Chairman of the Infosys Board, R Seshasayee, has vehemently denied any wrongdoing and clarified that much of Sikka’s compensation is hinged on meeting admittedly tall targets: $20 billion in sales at 30 per cent net margin and $80,000 revenue per employee by 2020. He has rued the decision to grant Bansal a large severance, even if he was paid only Rs 5 crore and not the whole sum agreed upon, and said it was a mistake that would never be repeated. And in a wise if belated move, he has acknowledged the importance of consulting the founders from time to time. But the damage is done. Some of the gloss that had been restored to Infosys since Sikka’s appointment in August 2014 has been rubbed out, dulled by doubts that the company is falling from its moral apogee. Corporate governance experts are busy judging Infosys against its own spotless past, and pointing out minor ‘irregularities’ like the appointment of DN Prahlad, a relative of Narayana Murthy and a former employee of Infosys, to the Board.

Narayana Murthy, too, has come out of the episode looking worse for wear, as analysts debate the propriety of his interference in a company where he and his family, the largest shareholders, hold just 3.4 per cent shares. The founders together own less than 13 per cent of the firm. “As a majority of shareholders are aware of these issues and have not raised any concern, the voice of the founders at best is a minority voice and must be given the same treatment as any other shareholder would deserve,” says JN Gupta, managing director, Stakeholders Empowerment Services, a corporate governance advisory firm. “If the founders feel that they need to come back to the Board, they must offer themselves up for Board positions. It reflects rather poorly on the investor relations of the company, as either these founder-investors were taken for granted and ignored or they, acting en bloc, want to have a say in the affairs of the company.”

R Seshasayee has denied any wrongdoing and clarified that much of Sikka’s compensation is hinged on meeting admittedly tall targets: $20 billion in sales at 30 per cent net margin and $80,000 revenue per employee by 2020

The man at the centre of this boardroom drama, however, seems unwilling to allow the optics of it to ‘distract’ him from his mission. Analysts, clients and investors, including large institutional investors like Oppenheimer Funds, have remained just as steadfast in their support of Sikka, who has been making all the right noises about future- proofing Infosys at a time when the ITeS industry is slowing down and bracing for disruption. The markets, in fact, reacted positively to the row, with the stock gaining about 5 per cent even as the controversy raged. “This is quite different from the Tata-Mistry rift, where a change was possible. In Infosys’ case, who can lead, if not Sikka? Investors will not risk trying out an alternative,” says a senior analyst at a securities firm in Mumbai who does not want to be named. “We are more concerned about the time the management is wasting on a needless controversy. As long as he keeps investors happy, how does it matter if he chartered a jet or bought an office in Palo Alto?”

“Today, ITeS companies need someone who can talk strategy with prospective clients and open doors for you. This kind of talent was missing in India before Sikka came in,” says Sanjiv Hota, associate vice-president, research, at Sharekhan. In the two-and -a-half years since Sikka was handed the baton, Infosys’ revenues have grown from $8.2 billion to $10 billion, attrition has plunged from 24 to 15 per cent, and margins have held steady. Infosys shares have risen 18 per cent since Sikka assumed office. But since the beginning of this fiscal, shares have dropped 18 per cent. The challenge Sikka faces is combating pricing pressure and accelerated commoditisation of the company’s legacy offerings—application development and maintenance—even as it prepares to pivot to a more automation-and-innovation-driven business. Faster execution and better employee utilisation—despite a major setback in the loss of a large contract with Royal Bank of Scotland—have helped strengthen the core business. Meanwhile, Sikka is steering a silver stream of ideas like artificial intelligence and machine learning into the ocean of mainstream business strategy. Last year, Infosys launched Mana, a machine learning platform to drive automation and innovation, with much fanfare and it is already said to be bringing in business of about $100 million each quarter. The company claims to be freeing up over 2,000 employees every quarter—it has a total of 200,000 employees—from routine tasks that are being automated.

Sikka, whose doctoral thesis at Stanford was in the field of AI (artificial intelligence), has made automation the topic du jour at Infosys, even as all IT majors have adopted it in varying degrees to improve productivity and to offer richer analytics to clients. In a recent letter to employees, Sikka quoted Martin Luther King Jr on working towards his long-term vision for the company: ‘If you can’t fly then run, if you can’t run then walk, if you can’t walk then crawl, but whatever you do you have to keep moving forward.’ ‘He was, of course, talking about freedom,’ Sikka wrote. ‘But it applies equally to us. To our freedom, from the tyranny of the mundane, of the cost-driven value delivery, our freedom to think, to innovate, to create.’ Some analysts say Sikka is an able wordsmith who may have over-promised and under-delivered. The company, which had under co-founder-turned-CEO SD Shibulal suspended its practice of giving guidance figures, has been posting rather rosy guidances over the past year, only to subsequently revise them downwards citing external pressures. “His heart is in the right place and investors are playing for possibility by placing their faith in Sikka. But not much is going to change for any IT company in the next year or two. The 2017-18 growth will likely hover around 8 per cent and the numbers are going to be painful for Sikka,” says an analyst.

The proof of an ITeS company’s performance, says V Balakrishnan, lies in the pudding of revenue per employee, which has plateaued at about $50,000 and shows no signs of nudging upwards. In some troubling ways, Sikka’s vision of the future resembles Shibulal’s disastrous ‘Infosys 3.0’, which was a futuristic strategy the company followed between 2011 and 2014 for moving up the value chain by focusing on platforms and products. Even as it signed on smaller clients, Infosys’ traditional business suffered and a number of senior executives quit. If Sikka’s promise of transformation takes longer than expected, markets may gnash at the issues facing the IT major. To boost investor morale and share prices, Mohandas Pai and Balakrishnan have been advocating a buyback using Infosys’ copious cash reserves—over $5 billion—citing the example of Cognizant’s recent approval of the return of $3.4 billion to its shareholders over the next two years. They had sought an $1.8 billion buyback in 2014 when Sikka took charge. With the present ego tussle between the founders and the Board unlocking a Pandora’s box, expect every aspect of Infosys to become fair game for scrutiny—from Sikka’s alleged caste bias after he referred to himself as a “Kshatriya warrior” to the political connections of its Board members, the reduced hiring this year, or even the relaxed dress code on Fridays. Perhaps the founders can now rest easy in the floodlights.