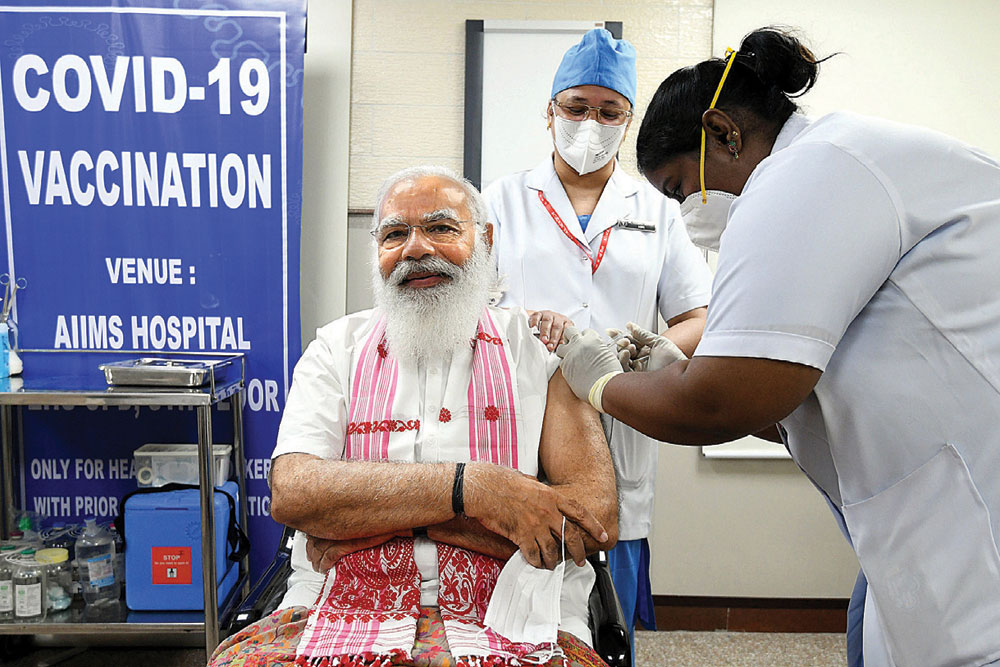 Prime Minister Narendra Modi, sporting a gamosa, gets his first shot of Covid vaccine at AIIMS in New Delhi, March 1


WHEN PRIME MINISTER Narendra Modi went to the All India Institute of Medical Sciences (AIIMS) in New Delhi to take his first Covid-19 vaccine shot, he wore an Assamese gamosa. This was not the first time he had worn it. Last year, addressing the nation on television, he had used it as a mask, prompting Assam’s Finance Minister Himanta Biswa Sarma to request the people of the state to replace the mask with a gamosa, the traditional handwoven white, rectangular piece of cotton cloth with motifs, mostly in red, on the borders.

In the middle of February, Congress leader Rahul Gandhi, kicking off the party’s Assam campaign from Sivasagar district of Upper Assam, and other leaders wore gamosas with anti-Citizenship (Amendment) Act (CAA) messages on them. Congress plans to collect over 50 lakh ‘anti-CAA’ gamosas, turning them into a political tool in its fight to recapture Assam from the Bharatiya Janata Party (BJP). The simple stole is symbolic of Assamese identity, a core issue in the Assembly elections beginning later this month, as parties from both sides of the aisle pledge to ‘save’ it.

The ruling BJP is leaving no stone unturned in an election it is fighting on the themes of ‘suraksha (law and order), vikas (development), sanskriti (culture)’, showcasing five years of its government’s performance and focusing on Axomiya identity. In the 2016 elections, the party had coined the slogan “jaati (ethnicity), maati (land), bheti (homeland)”, a promise to safeguard Assamese identity. Assam will be the litmus test for BJP on the extent to which it has leveraged its first inroad into the Northeast, its leadership’s efficacy and the extent to which it has carved out a niche. A victory in Assam will be seen as a seal of approval for the party’s governance and policy matrix. Unlike in West Bengal, Tamil Nadu, Kerala and Puducherry, where BJP is battling to dislodge its political rivals for the first time, in Assam it is fighting for a second term.

Political analysts say BJP is comfortably placed, in the absence of a strong chief ministerial candidate in Congress. After the death of Tarun Gogoi, the three-term chief minister before BJP defeated Congress in 2016, the state party was faced with internal discord that had divided it into four factions. BJP, on the other hand, has two stalwarts—Chief Minister Sarbananda Sonowal and Sarma, the party’s Northeast strategist and organisation man. In a recent interview to Open, Sarma said that Sonowal and he had been working harmoniously for over five years, negating the expectations of those who had anticipated an open rivalry (‘I have not changed, but Congress in Assam has changed’, January 29th).


“BJP appears poised for a comfortable majority. There is a leadership gap in Congress after the death of three-time Chief Minister Tarun Gogoi, who was like a father figure for Congress and widely respected in Assam. His son, Gaurav Gogoi, doesn’t have his father’s bandwidth. On the other side, BJP’s Chief Minister Sonowal is popular, with a smiling face. Himanta Biswa Sarma, who holds several key portfolios including finance, education and health, is influential, very astute and a key mobiliser,” says Sanjoy Hazarika, an analyst who specialises in the Northeast.

Hazarika, however, says it will be interesting to see how BJP performs in Upper Assam, where it had won handsomely in 2016 but which was also the epicentre of the anti-CAA protests. This area is going to the polls in the first phase. Of the 47 seats where elections will be held on March 27th, 42 are in Upper Assam. BJP, along with ally Asom Gana Parishad (AGP), had won 35 of these 47 seats in 2016.

The ruling BJP is fighting the election on the themes of ‘suraksha (law and order), vikas (development), sanskriti (culture)’, showcasing five years of its government’s performance and focusing on Axomiya identity

In a state that has witnessed several waves of migration since the late 18th century, the CAA has been a sensitive issue. In the last elections, Sonowal, who had emerged from the Assam movement that had led to the Assam Accord of 1985, had promised to protect the indigenous Assamese who fear that Bangladeshi migrants will reduce them to a minority in their own state. As elections near, he is assuring people that the CAA, which grants citizenship to persons belonging to Hindu, Sikh, Christian, Jain, Parsi and Buddhist communities who have migrated to India after facing religious persecution in Bangladesh, Pakistan and Afghanistan, will not affect the state’s demography. The anti-CAA protestors are opposed to giving citizenship to Bangladeshis who entered the state after 1971, irrespective of religion, as agreed in the Assam Accord. But the CAA makes non-Muslims who came till 2014 eligible. Sonowal, a ‘son of the soil’ who joined BJP in 2011, came under attack from the All Assam Students’ Union (AASU) in which he had begun his political career. Modi, who had made three visits to the state—Upper Assam and North Assam—before election dates were announced, and Union Home Minister Amit Shah have not directly addressed the CAA.

BJP is banking on its governance and development work—roads, railways, border fencing, drinking water projects, Central and state schemes for the poor and law and order—to dominate the narrative, eclipsing issues like the CAA. “Infiltration has dropped drastically. Border fencing of nearly 99 per cent has been completed and only 7-8 kilometres are left. Using technology from Israel, infiltration via river banks which cannot be fenced has been drastically reduced. This contradicts the fake narrative on the CAA. Some people misguided into joining the protests are now leading our campaign,” says BJP leader Baijayant Panda, who is in-charge of Assam.

Sarma, the state’s health minister, is confident that the hard work during the pandemic, when he regularly gave out data and connected with people using social media, has contributed to blunting the anger over the CAA. A four-time MLA, he has decided against contesting the state polls this time and has conveyed his desire to the party leadership for a chance to fight in the Lok Sabha elections. However, parliamentary elections are more than three years away. With his Brahmin background making it problematic for the party to declare him the chief ministerial candidate in a state with a 12 per cent Tribal population, the former Congressman focused on devising BJP’s strategy for the Northeast besides playing his own role in the state government.

A challenge for BJP is Congress’ alliance with perfume baron Badruddin Ajmal’s All India United Democratic Front (AIUDF). But AIUDF is a double-edged sword for Congress. An alliance with it draws criticism that Congress has joined hands with a ‘communal’ party. However, fighting separately would mean AIUDF cutting into its vote share. “In the past, Congress had secret pacts with AIUDF. Gogoi had opposed an open alliance. It has sent up a wave of disgust that Congress has entered into an alliance with a communal party,” says Panda.

BJP, which is not counting on the Muslim vote, might gain from the polarisation. Muslims, nearly 35 per cent of the state’s population, influence 36 of the 126 seats. AIUDF had won 13 of 126 in 2016, down from 18 in 2011. Congress had won 26, in an election swept by the National Democratic Alliance (NDA) with BJP getting 60, AGP 14 and the Bodoland People’s Front (BPF) 12. BJP’s relations with BPF had soured after it rejected the third Bodo Peace Accord last year. The rift widened when BJP tied up with Pramod Boro’s United People’s Party Liberal (UPPL), another regional party with its headquarters at Kokrajhar, a town in the Bodoland Territorial Region, for elections to the 40-member Tribal council in December. Soon after polls were announced, BPF chief Hagrama Mohilary tweeted ‘To work for Peace, Unity and Development the Bodoland People’s Front (BPF) has decided to join hands with Mahajath in the forthcoming Assam Assembly Election. We shall no longer maintain friendship or alliance with BJP.’

A challenge for BJP is Congress’ alliance with Badruddin Ajmal’s AIUDF. But that is a double-edged sword for Congress. An alliance with AIUDF draws criticism that Congress has joined hands with a ‘communal’ party

THE MAHAJATH OR GRAND alliance of six parties, including the Left, is led by Congress. In Tarun Gogoi’s absence, instead of projecting a chief ministerial candidate, the party has put up four faces— Gaurav Gogoi, former Silchar MP Sushmita Dev, Nagaon MP Pradyut Bordoloi and Nazira MLA Debabrata Saikia. According to a Congress leader, a generational shift could infuse fresh energy into the party. Yet, the absence of a face could be a disadvantage. Tarun Gogoi, who died following post-Covid complications in November 2020, was named posthumously for the Padma Bhushan on Republic Day, a move that left Congress rattled. When Gogoi was in hospital, Sarma—at the forefront of BJP’s campaign to defeat Gogoi in 2016 soon after he had quit Congress—had visited him.

“We have thrown out the narrative that we are not united. We have made it clear that we will fight on the plank of development, progress and inclusivity,” says Dev. Congress is hoping to cash in on the anti-CAA sentiments in Upper Assam. While the CAA is a sticky issue for BJP in Assam, Congress has categorically opposed it. The party’s general secretary in-charge of Uttar Pradesh, Priyanka Gandhi Vadra, decided to begin her two-day visit to the state from Upper Assam. Wearing a maroon mekhela chador, a traditional two-piece saree worn by Assamese women, she attacked BJP leaders for their “silence” on the CAA, interacted with women of the tea gardens, plucked some tea leaves with a basket on her head and even tried a few steps of folk dance. The tea Tribes are among the six indigenous communities that dominate Upper and North Assam. In the last election, they had backed the NDA. These groups—besides the Koch-Rajbongshi community, an ethnic Tribe descending from the Koch dynasty—which are now recognised as Other Backward Classes, are demanding Scheduled Tribe status.

The dust from the anti-CAA protests is yet to settle. The agitation threw up regional parties like Assam Jatiya Parishad (AJP) and Raijor Dal that will contest the polls together, making it a three-cornered contest. Though these parties have pitted themselves against BJP, they are likely to take away a portion of the Congress vote.

With battle lines drawn, it is to be seen which issue—development, ethnicity or religion—strikes the deepest chord.