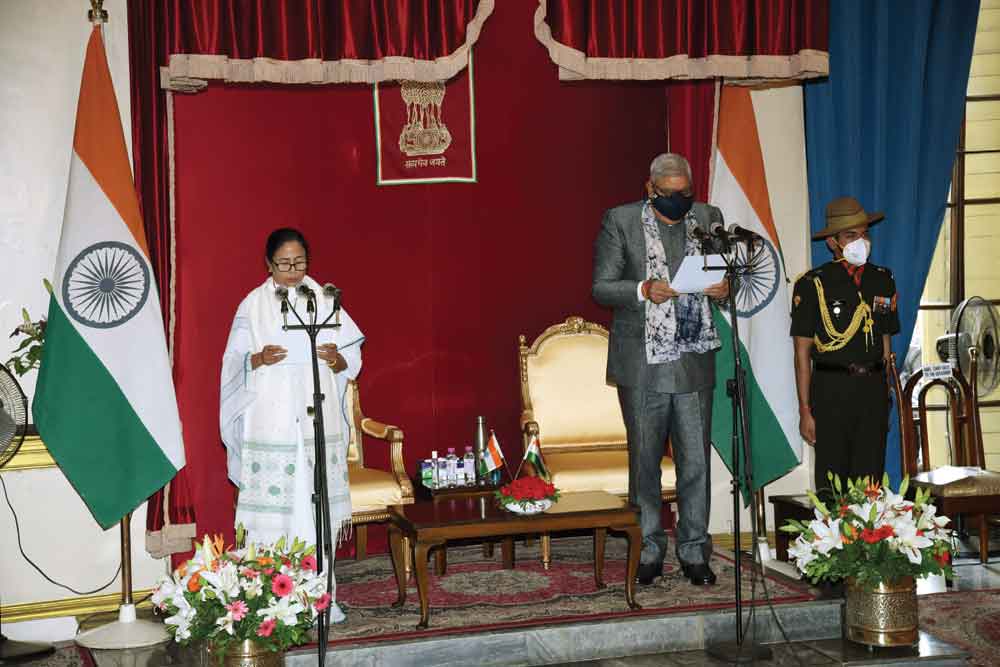 Mamata Banerjee being sworn in as chief minister for the third time by Governor Jagdeep Dhankhar in Kolkata, May 5, 2021 (Photo: Getty Images)


A TINY TWIST IN the tail can sometimes tell us more than a spin of the head. While the headlines of the Bengal election go to Mamata Banerjee, there is much to learn from the fate of a party which won only one seat out of the 292 in the new Assembly.

It was an instant project which adopted a grand name for the ballot: Rashtriya Secular Majlis Party. It also called itself the Indian Secular Front. Its objective was slightly less inclusive: it positioned itself as the electoral vehicle of the Bengali Muslim vote. The alleged lure was its association with the venerated Furfura Sharif shrine in rural Hooghly. A long queue of experienced politicians, sombre-faced leftist and rightist opinion-makers, and industrious journalists immediately pronounced that the oratory of its leader, 34-year-old Abbas Siddiqui, and the sanctity of the shrine would magnetise the Muslim vote towards this upstart entity.

At the heart of this misjudgement was a patronising conviction that the Bengali Muslim vote was immature or sentimental. The first lesson of the Bengal election of 2021 is clear. Every Indian voter, of every creed and denomination, knows whose foot is on the footstool. People do not vote for footstools.

But Congress, which has been around since 1885, and the Marxists, who have been in our public life for a century, were transfixed by a hallucinatory crown hovering over Siddiqui, and lost sight of the ground beneath their feet. They announced the formation of a grand triumvirate, labelled the Shanjukta Morcha, or Joint Front, and allotted 28 seats to the firebrands of Furfura Sharif.

Surprisingly, the Marxists became its chief benefactors. The temperature of this election campaign began to rise in February with an impressive rally at the Kolkata Maidan organised by the Joint Front. Congress leader Adhir Ranjan Chowdhury was speaking from the dais when Abbas Siddiqui arrived, fashionably late, as befitted his new status as the guiding celebrity of secularism. A Marxist leader told Adhir Chowdhury to curtail his speech so that due homage could be paid publicly to Abbas Siddiqui.


Mamata Banerjee’s party did not pay the price of incumbency, but half a dozen ministers did. They lost. TMC was saved from heavier punishment because so many of its vulnerable candidates switched sides, and were electorally hammered holding a different flag

The only seat which ISF or RSMP won was Bhangar in South 24 Parganas; every other seat in this district went to Trinamool Congress (TMC). Muslims have a dominant presence in the 64 seats of North and South 24 Parganas; Mamata Banerjee won 58. Forty eight of her winning candidates were Hindus.

It is a foolish but strangely self-perpetuating myth that Muslims vote only for Muslims; they vote for whoever they believe will uphold their interests for the next five years, just as everyone else does in a democracy. Mamata Banerjee won all 11 seats in Kolkata; 30 out of 34 in the adjoining semi-urban districts of Howrah and Hooghly; and 22 out of 25 in contiguous Bardhaman. The populations here are predominantly Hindu. The bottomline is uncomplicated: Hindus and Muslims voted largely in the same direction, as they have done in every Bengal election since 1952.

No province celebrates Hinduism with more gusto than Bengal. The 10 days of Durga Puja each year are a carnival of deep faith, exquisite melody, superb cuisine, and fraternal union and reunion with family and friends. All tension melts in the joy floating through the air. Faith is a celebration in Bengal, whether Puja or Eid, a time for neighbours and communities to meet in a heart-warming display of social harmony. Equally, no province asserts its political identity with greater verve than Bengal, but religion and politics tend to survive, exceptions apart, in separate domains. Bengalis are primarily Bengali in their politics, and vigorously religious in their private lives; the two rarely intersect.

Abbas Siddiqui, however, might take some consolation in the arid wasteland of defeat. His party with one seat did fabulously better than its vaunted allies: Congress and the Communist Party of India-Marxist (CPM) got no seats at all. Zero. They made negative history. Neither had ever touched this nadir. Congress got eliminated even in Malda, the stronghold built by the late and venerated ABA Ghani Khan Chowdhury during the heyday of Indira Gandhi.

The English language has a term for post-fiasco rumination: soul-searching. But you can search within your soul only if you have a soul left. Mamata Banerjee might have driven two souls, one tricolour and the other red, into temporary oblivion.

‘Temporary’ is a necessary qualification, however. Neither victory nor defeat is permanent in politics. But resurrection is impossible until the comatose reinvent themselves. For Bengal’s Marxists, this should be easier. They are not trapped by dynasty, and all they have to do is check with their Kerala colleagues. In good times or bad, the Kerala CPM has protected its identity, which may be fortuitous since Congress is their principal opponent. But in Bengal, squeezed by a dominant TMC and a rising Bharatiya Janata Party (BJP), CPM has effectively become the Congress Party of India (Marxist).

Their dilemma will intensify as these parties gear up for the big challenge of a national General Election. Should CPM and Congress settle for one seat each in Bengal and let Mamata Banerjee contest the rest? There is no reason why she should consider a more generous offer. Or will CPM and Congress take a more self-assertive view, which might push them into further electoral irrelevance?

Politics is a paradox which asks questions of every player in the game. Mamata Banerjee cannot take success for granted. Her party did not pay the price of incumbency, but half a dozen ministers did. They lost. TMC was saved from heavier punishment because so many of its vulnerable candidates switched sides, and were electorally hammered holding a different flag. The casualty rate among turncoats and minor cinema celebrities seeking a different form of glamour was high.

Wit is an integral part of Kolkata politics, and so the Urdu joke doing the rounds after the results had the twang of sugar and spice: ‘Khaala ki khilafat bach gaee’, or, ‘Aunty’s Caliphate has survived’. Aunty’s citadel now requires a fresh guard. If Mamata Banerjee wants to ramp up her fortunes to the next level, she will also need to ensure that her new guards have clean hands.

It is a foolish but strangely self-perpetuating myth that Muslims vote only for Muslims; they vote for whoever they believe will uphold their interests for the next five years, just as everyone else does in a democracy

Media took no notice of this press release. Someone with a political eye would have taken a second look at the list of signatories: Sonia Gandhi, HD Deve Gowda, Sharad Pawar, Uddhav Thackeray, Mamata Banerjee, Hemant Soren, MK Stalin, Mayawati, Farooq Abdullah, Akhilesh Yadav, Tejashwi Yadav, D Raja and Sitaram Yechury. Are we seeing the green shoots of an alliance for the next General Election? Is TMC ready in principle to accommodate the Left? Are Akhilesh Yadav and Mayawati back on the same page? Will the Akali Dal enter its name after the Punjab Assembly election? With Sharad Pawar too ill, is Mamata Banerjee the only leader acceptable to this alliance as its candidate for prime minister?

Khela is still in the air.

The first organised sport in British Calcutta was racing. The fourth Governor General, Lord Wellesley, tried to ban it in 1798, only to witness the emergence of the Bengal Jockey Club in 1803, just before His Lordship’s departure from what is now Raj Bhavan, a palace which Wellesley constructed. As racing grew into a public institution with gaming characteristics, the Calcutta Turf Club was born in 1847. The Bengali gentry had become hooked, with deleterious consequences to its purse, and much joy in bookie ledgers. A ‘Benglish’ ditty, the song of a jockey to the Bengali Baboo, became popular at that time:

An inadequate translation would go something like this: The day of the final game is coming soon/Everyone has to play in that game, brother./Whether arriving or leaving, we’ll meet again/Goodbye! Goodbye!

Everyone has to play in the final game of a five-year league, a national General Election. One khela is over, and another has begun.