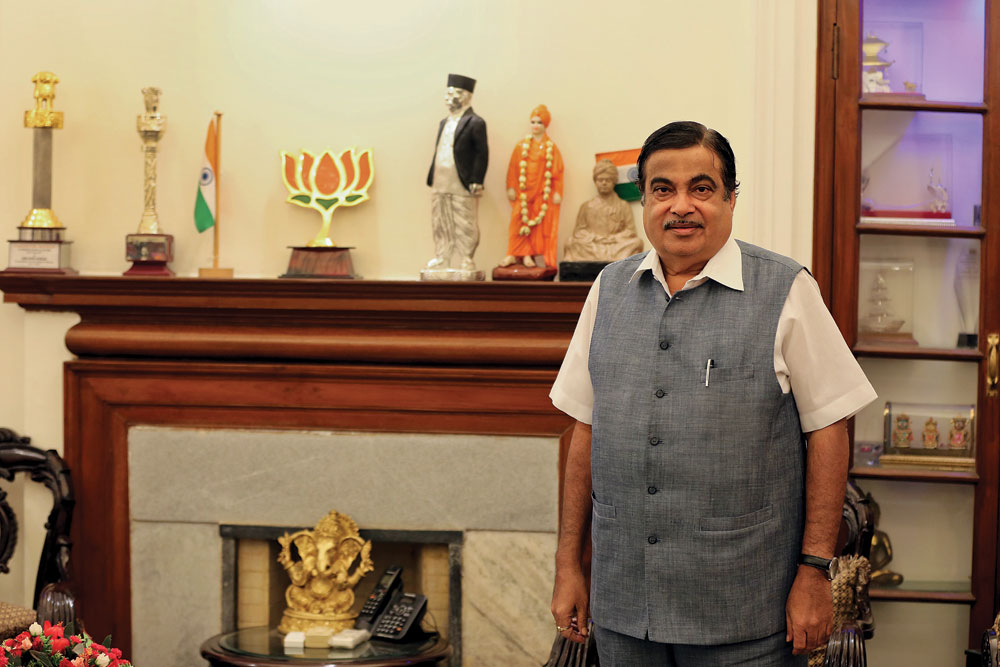 
The speed of highway construction in the last eight years has been remarkable going by past standards. What is the secret of the success and are you satisfied? Can you explain how travel between distant parts of the country will change?

We have achieved the highest ever record of per day highway construction in India. The pace of highway construction increased from 12 km per day in 2014-15 to 37 km per day in 2020-21, which is more than three times. About 4,410 km of national highways (NH) were constructed in 2014-15 and about 13,327 km in 2020-21. This is all because of efforts by our ministry officials, engineers and contractors. Apart from that, we have adopted a comprehensive strategy for development of roads. Roads are being developed through EPC (engineering, procurement and construction), HAM (hybrid annuity model) and BOT (build-operate-transfer). The sources of funding have also been diversified to include cess, budgetary allocation, long-term debt, and proceeds from monetisation. This allows the National Highways Authority of India (NHAI) to tap appropriate sources of funding based on requirement. NHAI has also been able to take advantage of liquidity in the banking system to raise debt at very attractive rates. With the large inventory of completed roads and those that will be returning to NHAI from BOT concessions, NHAI is monetising road assets to pare down debt as well as develop new roads. It has been ensured that 90 per cent of land will be made available before the appointed date for a project. A ministerial level Group on Infrastructure has been set up under me to resolve approval or clearance issues related to environment and forest, railways, defence and civil aviation.

We are allowing 100 per cent foreign direct investment (FDI) in the road sector. Toll collection has already crossed the pre-Covid level and is rising at a rapid rate. Today, about 97 per cent of toll collection on NHs is through FASTag. I am sure we will be able to collect about ₹ 2 lakh crore as toll by 2025. There is a stuck projects policy too.

The Ministry of Road Transport and Highways (MoRTH) is developing greenfield expressways and access-controlled corridors under the Bharatmala Pariyojana. About 65,000 km of highway network is being developed with minimum configuration of divided four-lane highways. It is expected that travel speed would increase by 25-30 per cent. The distance between Delhi and Mumbai will be reduced to 12 hours only for cars and 20-22 hours for trucks. The travel time between Delhi and Meerut is only 40-45 minutes. Now you will be able to travel between: Delhi and Dehradun in two hours (by 2023), Delhi and Haridwar in two hours (by 2023), Delhi and Jaipur in two hours (by December 2022), Delhi and Amritsar in four hours (by 2024), Delhi and Katra in six hours (by 2024), Delhi and Srinagar in eight hours (by 2023-24), Chennai and Bangalore in two hours (by 2023). There will be seamless connectivity for Chardham and Kailash Mansarovar Yatra. The distance from Pithoragarh in Uttarakhand to Lipulekh Pass on the India-China border will be covered in just five to six hours. About 14,000 km of NH network is being developed in the northeastern states. NH length has increased by 31 per cent in the last seven years, with an investment of ₹ 41,000 crore.

Under PM Gati Shakti, my ministry is connecting all northeastern state capitals with a four-lane NH or with two alternative arrangements of two-lane highways. My ministry has extensively focused on increasing connectivity to 124 aspirational districts. It has constructed 6,700 km of highway network in such districts. The development of about 2,000 km of roads is envisaged for providing connectivity to border areas and international connectivity under Phase I of Bharatmala. Our vision is to develop a safe, efficient and sustainable NH network for accelerating regional connectivity and inclusive socio-economic growth.

You have said Elon Musk should come to India and manufacture Tesla cars to sell them here. What benefits would India offer?

India has a huge domestic market for all types of vehicles. Many reputed multinational auto brands are in India and they are doing great business. I will request Elon Musk to come to India and start manufacturing Tesla cars and their other auto products. All vendors available in China are also here, be it for spare parts or other things at comparable quality from Indian manufacturers. In addition, there is a huge demand for electric buses and trucks as our mobility sector is at an important juncture of switching largely to E-mobility. The Indian government is very positive, supportive, flexible, time-bound and transparent. We are committed to making India the No 1 automobile manufacturing hub in the world.

“India has a huge domestic market for all types of vehicles. Many reputed multinational auto brands are in India and they are doing great. I will request Elon Musk to come to India and start manufacturing Tesla cars”

PM Gati Shakti proposes to bring together 16 ministries to synergise project planning. What are the challenges in such integration?

The prime minister launched the PM Gati Shakti National Master Plan for providing multimodal connectivity infrastructure to various economic zones on October 13, 2021. It is aimed at accelerating the growth of world-class infrastructure through synchronised, holistic, integrated and comprehensive planning and execution through knowledge, technology and innovation. PM Gati Shakti has a well-designed three-tier institutional framework, including an empowered group of secretaries, a network planning group and a technical support unit. All existing and future schemes or projects from various ministries and departments will be executed via this platform. The ministries will regularly update the PM Gati Shakti GIS (geographic information system) portal and also share any new proposal for integrated planning and sanctioning. State governments have to take an active part in the process. The success of the plan for multimodal connectivity largely depends on the coordination among Central ministries and states, various departments within states and interstate cooperation. Further, district administrations have to play an important role at the ground level. It is essential that required layers of data are mapped on the GIS platform. We need to emphasise proper communication and coordination among all stakeholders and provide capacity-building on the use of monitoring tools for updating and sharing data. It is necessary to identify projects which are important from a multimodal connectivity point of view and development of new economic zones. I am confident that with cooperation, coordination and communication among all stakeholders, PM Gati Shakti will help us achieve an “Atmanirbhar Bharat”.

You have always envisaged a roadmap for the future. What’s next?

The government‘s focus is on time-bound, qualitative, cost-effective and sustainable infrastructure development. India will have an NH network of two lakh kilometres by 2025. My objective is to make Indian road infrastructure of American and European standards. We are committed to bringing logistics costs below 10 per cent of GDP which will make our industry and trade globally competitive. We are encouraging public transport and other last-mile connectivity modes like ropeways, cable car, funicular rail, rapid-rail transport system and road-train buses. The government intends to adopt import substitutes, cost-effective, pollution-free and indigenous fuel for our transport needs. We are promoting the use of clean and green alternative fuels such as ethanol, methanol, Bio-CNG, LNG, Bio-diesel, H-CNG, electric and green hydrogen. The shift on clean fuel would reduce our import expenses on petroleum products and improve air quality.

“We are developing greenfield expressways and access-controlled corridors under Bharatmala. About 65,000 km of highway network is being developed with minimum configuration of divided four-lane highways. Travel speed should increase by 25-30 per cent”

The ministry is developing wayside amenities at every 50 km along NHs to facilitate road users. We are developing 35 multimodal logistics parks (MMLPs) across the country connected with road, rail, air and waterways. These MMLPs will have warehouse and cold-storage facilities. The ministry is also laying optical fibre cables along NHs. This will be a big boost to high-speed internet connectivity in rural areas along NHs. The ministry will also facilitate a GPS-based (satellite-based) tolling system that will enable users to bear toll charges only for usable highway length. We are ready to adopt the world’s best technologies without compromise on quality, cost-effectiveness and sustainability.

Some of the decisions taken by the government, such as spending on Capex, are intended to be transformative in terms of quality and scope of governance. How far are we from becoming a country with modern infrastructure?

The government is working on various new projects under different sectors, including roads. It is dedicated to bringing modern infrastructure within everyone’s reach. Autonomous bodies, especially NHAI, are capable of disbursing approvals on vital road infra projects in a relatively short span of time and it is evident from the increased pace of road infrastructure construction.

“Environmental concerns are one of the major factors taken into account in projects implemented by the government nowadays. One of the prime examples of government initiative is the green belt on the Delhi-Mumbai Expressway”

Over time, NHAI’s debt has grown very large. How do you plan to reduce it?

NHAI has been instrumental in adopting innovative methods for monetising its assets through models like Toll Operate Transfer (TOT), InvIT and other models, such as securitisation of toll which has received an overwhelming response from stakeholders, including the private sector. It is planning to test more such models (that would prove contributory towards getting hold of the accumulated debt.) NHAI has been able to raise more than ₹ 22,000 crore from TOT, more than ₹ 7,000 crore from InvIT, and more than ₹ 15,000 crore through models like securitisation of toll revenue. Moreover, as per the National Monetisation Pipeline, the road sector will contribute more than 27 per cent of the asset monetisation target till FY25, amounting to more than ₹ 162 lakh crore.

In many important infrastructure projects, environmental activists raise concerns and matters go to court. Is there a way to reduce such conflicts?

Environmental concerns are one of the major factors taken into account in projects implemented by the government nowadays. One of the prime examples of government initiative is the green belt on the Delhi-Mumbai Expressway.