Rahul Gandhi emerges from his mother’s shadow to run the Congress. The road to India 2019 begins with a small step in Gujarat 2017 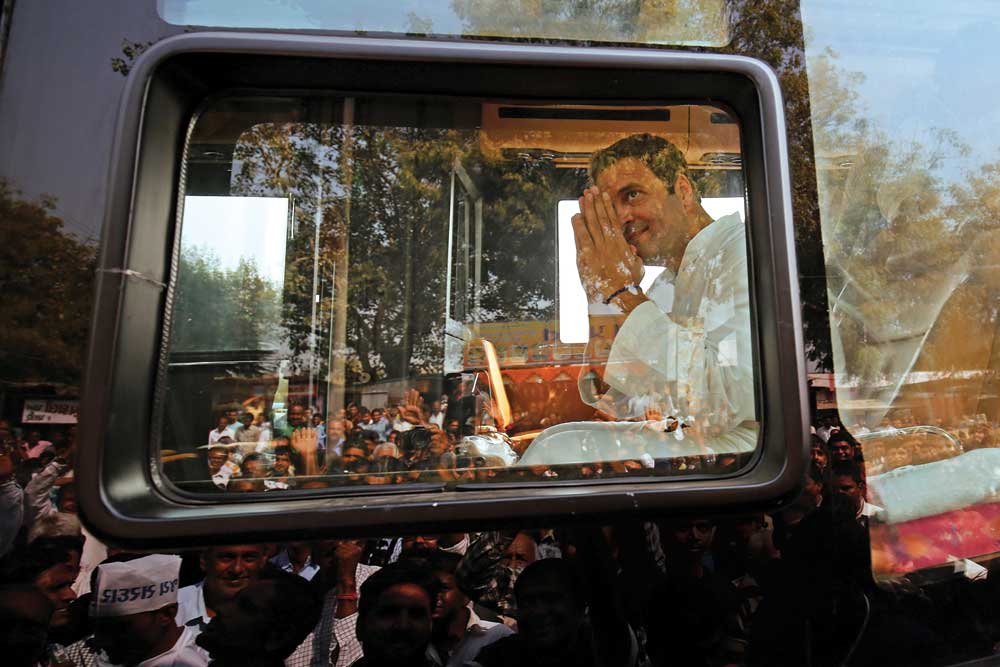 On November 24th, Rahul Gandhi, who is now certain to become president of the Indian National Congress, was so moved by a part- time lecturer’s grievance in Ahmedabad of inadequate remuneration that he got off the stage, went up to her and hugged her. It was a moving gesture; the lecturer, Ranjana Avasthi, and perhaps most of her family and many of those present in the audience that day, might well vote for him for the rest of their lives. It was almost as if the 47-year-old leader, often called a ‘prince’ in both reverence and derision, had been struck hard by that encounter with suffering, akin to another heir many centuries earlier who had renounced the world and became a monk. But Rahul Gandhi’s holy grail is political power, which, like his father, he treated as hemlock at first and like him has now warmed up to.

Rahul is not new to suffering, either. For someone who lost his grandmother and father in terrorist attacks and spent his childhood guarded by commandos, there is hardly any Indian who did not, at some point, have sympathy for him. For many of them, he remained the teenager who was photographed clinging to his father at his grandmother’s funeral. They may have had mixed feelings about his father, but for many, the rudraksh– wearing Indira was the embodiment of Durga, as even someone like Atal Bihari Vajpayee had called her in 1971 after India’s victory in East Pakistan. This sentiment did not get washed away even by Sonia Gandhi’s maiden name.

In 2004, when Rahul Gandhi contested an election for the first time, many saw in him a hopeful young man who wanted to genuinely change things. Many Congressmen were surprised at his entry to politics; they always thought that his sister Priyanka would be a more natural choice for succession. Apart from her resemblance to her grandmother, she was seen to be more at ease with politics, as evident from her public meetings and interactions. But it was Rahul whom Sonia Gandhi thrust forward, despite her fears that politics was poison, one that had consumed her husband and mother-in-law.

In 2007, when Rahul took over as the party’s general secretary, he set out to revamp it. Placed in charge of the Youth Congress, he pushed for inner-party democracy and transparency, at one time insisting that every party member’s application be accompanied by a photograph, to weed out fake members. As noted by journalist Rasheed Kidwai in his book, 24 Akbar Road, a history of the Congress, while interviewing aspirants for the post of Youth Congress chief, Rahul would ask questions on India’s international trade and the Indo-US civil nuclear deal. He had ideas for the party and for India as well. But, somehow, these never bore fruit. Shadowed by his mother’s authority and misguided by his advisors, his efforts always fell short.

Ambivalence marked his personal crusades as well. From his insistence on eating meals with Dalit families in Uttar Pradesh to acting as an ambassador for the tribals of Odisha’s Niyamgiri Hill, he appeared to flit from one cause to another, while those he claimed to represent continued to live the same sordid lives after he had turned his gaze away. The then Prime Minister Manmohan Singh had a sound word of advice for him: join the Government. But he seemed reluctant to take on any such official responsibility.

When Rahul began to take an interest in the politics of Uttar Pradesh, his family’s ‘home state’, many were of the opinion that he could show his earnestness by projecting himself as the party’s chief ministerial candidate for it. That did not happen either. Meanwhile, he became the butt of jokes by his detractors on account of gaffes in his speeches, where he often failed to recall the names of his colleagues and other leaders. In an NDTV show, the US journalist Gardiner Harris put it rather succinctly: “Rahul is not a politician; he is not good at his job. We have tried to watch him grow in the past 11-12 years… ‘Oh please Rahul, grow into this role’. He doesn’t… He doesn’t do anything. He is terrible. He is not a politician. Politics is a tough job. You’ve got to know people’s names, you’ve got to know the subject. You’ve got to get out there and rouse the troops. He cannot do any of this. So the Congress party is going to die if they continue to promote Rahul.”

Gardener just echoed what many in the Congress and outside had felt for years. But in a party where sycophancy has long been the guiding light for success, party loyalists kept a straight face when confronted with this question. In their minds, those who wanted Rahul to succeed had tried to see him reinvented so many times that their imagination had turned sore. Whenever he would roll up his kurta sleeves, they felt now at last he would change. But the sleeves kept coming up, while their expectations kept slipping.

The BJP seems to sense that if it slips up a bit, especially in Gujarat, Rahul Gandhi could become a rallying point for all opposition parties, and this could possibly revive the Congress’ lost vigour

In 2013, Rahul Gandhi was made Congress vice-president. The General Election of 2014, the only one in which he has led his party to the hustings as its chief campaigner, was to prove a debacle. The oldest party in the fray was reduced to its lowest-ever tally of 44 seats in the Lok Sabha. In 2017, the Congress managed to win just seven seats in the UP Assembly elections, a performance he termed as being “a little down” from earlier. Before the polls, in December, he had disappeared just as the party was planning several events for him to preside over. In 2017, the Congress failed to form governments in Goa and Manipur despite winning the highest number of seats there. It was not clear if Rahul was keen on pitching for power in Panaji and Imphal.

Old Congress watchers offer another view, though. They say that Rahul Gandhi had a lesson to learn from his father’s political career. After he became Prime Minister, Rajiv Gandhi was a man in a hurry, and this led him to many a misstep, like India’s intervention in Sri Lanka that ultimately cost him his life. Rahul’s motto, they say, is: First Deserve, Then Desire. “Rahul Gandhi has a sense of detachment which has cost him dearly. In politics, being patient is a curse,” says Kidwai. “But in the coming days, you will see more and more [of the] real Rahul Gandhi.”

On December 5th, posters appeared outside the Congress headquarters in Delhi, referring to him as ‘Pandit Rahul Gandhi’. While Rahul’s new Hindu image has disappointed left liberals, party insiders feel that this is only pragmatic, given that he has to fight a party which many favour for its pro-Hindu stance. “If you ask me, the Congress has always been right-wing. Even a person like Nehru had several people in his Cabinet who had clear right-wing leanings. It did not feel so during Sonia Gandhi’s time since she had the natural handicap of being a foreigner. But Rahul has a clean slate in that sense,” says a Congressman. “If you look at the period from 2004 to 2014, a Sikh was Prime Minister, a Christian was Defence Minister, and Sonia Gandhi’s closest aide was a Muslim. It was a coincidence but went a long way in giving an impression that the Congress did not have the interest of Hindus on its mind,” says another.

The BJP may pretend otherwise, but it is apparent that it gets jittery whenever Rahul Gandhi is in the news. That is why top BJP leaders, who otherwise claim he does not matter, attack him at every given opportunity. The ruling party seems to sense that if it slips up a bit, especially in Gujarat, Rahul Gandhi could become a rallying point for all opposition parties keen to overthrow it, and this could possibly revive the Congress’ lost vigour. In the past, feel political experts, the Congress failed to take advantage of several opportunities provided by the Modi Government—from demonetisation to cow vigilantism. Now in the run-up to the Gujarat polls, Rahul has finally turned the heat on the ruling dispensation, asking Modi a question every morning via Twitter on issues like healthcare and rising prices of essential commodities.

The Congress party is desperately looking for success in that state, hoping that its new president will take a Trojan Horse into a BJP bastion. Once it gets on the ascent, say political experts, the Congress has some advantages over its rival that will come in handy for Rahul Gandhi as he sets out on the path to become the party’s prime ministerial candidate for 2019. “There is no doubt that the Congress has a talent pool which the BJP lacks,” says Kidwai, “So Rahul Gandhi has a system in place already.”

Before leaving for the US—a tour in which an old family friend, Sam Pitroda, played his guide—Rahul had told one person close to him that the American perception of a leader matters a lot. After that visit, he is now headed for China and Russia, trips that are meant to serve as image-building exercises for him.

But there are challenges ahead. A passionate speech or a spark of wit on social media does not an election win, at the end of the day. Rahul Gandhi must also understand that he is pitted against the Sangh Parivar and the Modi-Amit Shah duo. There are many who are unhappy and even angry with the Prime Minister, but when they look at Rahul Gandhi, they turn back. The Congress successor’s immediate challenge will be to change that well in time for the next General Election.

In the run up to the 1980 Lok Sabha polls, when Indira Gandhi was seeking a return to power after her 1977 humiliation at the hustings, she and Sanjay Gandhi went on a gruelling campaign, each covering a distance of more than 40,000 km in all, addressing 15-20 meetings a day. In his book, Kidwai quotes a comment in a Newsweek report on Janata Party leaders: ‘At times, it seemed they were running not so much against a diminutive sixty-two-year-old political candidate, but a myth, a legend in sari and dusty sandals.’

Rahul Gandhi is years away from becoming any such myth. But that journey could start with one small step in Gujarat, which he is touring currently. Even Saamna, the mouthpiece of BJP-ally Shiv Sena, ran an editorial recently saying that the Gujarat campaign had turned Rahul into a leader and that his temple visits were a ‘victory for Hindutva’.

Will Rahul Gandhi bring back the Congress party’s pragmatic and eclectic approach to Hinduism that helped keep it in power for decades? In September, that is the advice the veteran journalist and India watcher Mark Tully had offered the Congress: find a place for religion in the party, for most Indians are religious. The Congress and its supporters, he said, seem to believe that “if you say anything about Hinduism, if you say anything about religion, you are RSS”.

After Gujarat, there are elections scheduled in states like Rajasthan, Madhya Pradesh and Karnataka, before the bugles are sounded for the 2019 General Election. As of now, all eyes are set on Gujarat. The future of the Congress rests on its new president’s shoulders. Who or what he adopts as his guiding force will pretty much determine the party’s fortunes. And so of this country too.