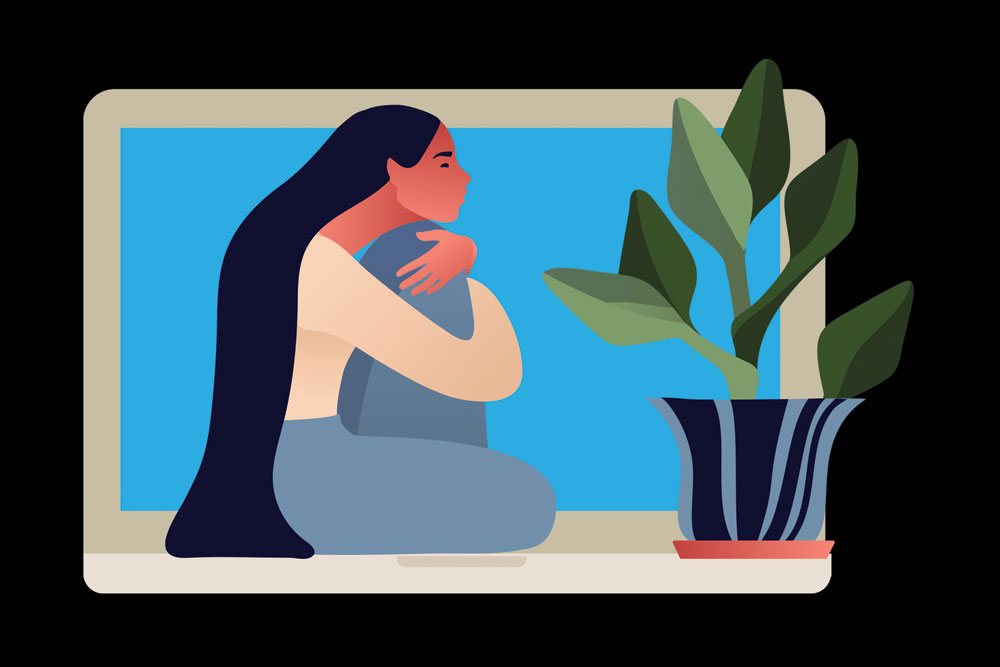 
INDIANS ARE NOT happy. In the Happiness Index, we rank 139 out of 149 countries. What is, however, not so well-known is that we are also among the most depressed people in the world. According to World Health Organization (WHO) estimates, 56 million Indians suffer from depression, and another 38 million from anxiety issues. The pandemic has, in all probability, had a compounding effect on these issues. Even before the pandemic and indeed even before Deepika Padukone, mental health was already a buzzword among a certain section of the population which had the means and support system to make it a priority. A Bollywood superstar’s acknowledgement of her fragile mental health did much to bring terms like “depression” and “anxiety” out of the closet, but it is only with the pandemic that the conversation around mental health has become mainstream.

In 2018, Singapore-based Kanika Agarwal was besieged by panic attacks. She needed therapy but wanted an India-based therapist who could understand her cultural concerns too. Agarwal’s experience, which saw her struggle to find a good therapist as well as face societal censure with regards to being open about her needs, led her to start MindPeers, a “mental strength” platform online. MindPeers was launched in January 2020 with the objective of making therapy affordable and accessible to individuals as well
as organisations.

The mental health and wellness startup space in India, not a very crowded one to begin with, has increasingly been at the receiving end of a lot of attention since March 2020. By the time Agarwal got around to launching MindPeers, platforms like YourDost, InnerHour, Wysa were already a few years old and making mental health solutions accessible to Indians. But it would take a pandemic to make them really go mainstream.

“So many things happened with the pandemic and the lockdown. Pre-existing [mental] conditions got exacerbated, stressors got built up. People developed stress, grief, anxiety, loneliness…people with vulnerabilities were afflicted more…there is an overall sense of languishing,” says Dr Amit Malik, founder InnerHour, a mental health platform. Launched in 2016, InnerHour arose out of Malik’s realisation that the treatment gap in India is huge. With over 20 years of experience in the mental health space, Malik says he saw the need for accessible treatment across markets, including in the developed world. “Unlike a physical condition, there are no symptoms when it comes to our mental health.” He re-iterates the point about treatment gap. “There are good doctors but there is lack of awareness, there is stigma, cost…there are so many barriers that hinder access.” InnerHour offers clinical tools ranging from self-help AI tools, personalised programming to voice and video therapy sessions in multiple languages. Malik knew that he needed a strong tech backbone to create early access and build engagement, but before that the very first step would be creation of awareness. “It is as important as catering to the need.”


More than 10 crore Indians go by without the professional help they need to tackle mental health issues. The stigma associated with it remains huge even as lack of awareness makes the situation worse. “The topic of mental health has a major awareness problem. There is a lack of awareness which leads to trivialisation of issues. I have heard people casually using terms like OCD, anxiety, depression as adjectives without realising the gravity of these disorders,” says Richa Singh, co-founder of YourDost, one of India’s leading platforms for mental health.

Singh’s journey to running a successful startup has been a long one which started with a blog. Shaken up by the loss of a friend due to suicide during her undergraduate studies, Singh and her co-founder Puneet, started noticing stress levels of people around them. “Job pressure, relationship issues, confidence or self-esteem issues affected almost everyone. But people were hesitant to talk about this with a professional because of stigma and lack of awareness,” says Singh over an email interaction. The couple started a blog where they shared real stories of people, albeit anonymously, who had undergone counselling, which led many readers to write in sharing their own experiences and how their posts had enabled them to seek help too. Singh was quick to realise that the problem wasn’t just stigma, but also access to healthcare, both in terms of knowledge and affordability. “Quality mental support can get quite expensive in India,” says Singh. Indeed, in metros, a well-established therapist can charge anywhere between ₹ 2,500 and ₹ 4,000 per session. And for therapy to be effective, it has to be consistent for months. YourDost is meant to be a one-stop-shop that solved the issues of accessibility, affordability and availability of mental health support. The platform provides access to over 900-plus experts 24×7 and self-help tools while promising complete anonymity.

For Sharad Dhasmana (name changed) it was the twin promise of anonymity and access to a therapist that led him to sign up with an online mental health platform his company had tied up with. An engineer employed with a mid-level corporate, Dhasmana moved home to his parents during the lockdown. Once there, he found old patterns of behaviour with his family surfacing which led to extreme resentment. “I was claustrophobic, caught in a situation not of my making and which wasn’t in my control, and deeply angry at having to let go of control over my life. I had my job, my family was healthy but my personal issues seemed insurmountable.” Dhasmana suffered through insomnia and steadily piled on weight. He was aware enough to realise that what was happening with him needed immediate intervention, which is why he did not hesitate when the email from his company’s HR announcing a tie-up landed in his inbox. “I am back in Mumbai now, but my sessions continue. Over the course of the past one year, I have realised that therapy needn’t be goal-oriented. It’s become part of my self-care ritual and I feel better and lighter.” Interestingly, no one, including his partner, is aware that Dhasmana is seeking professional help. In his own way, he realises he contributes to the stigma around mental health but as he jokes, “I have conquered the mountain of my apprehension right now. The other peak can wait for a bit.”

Concerned about burnout rates among employees due to work from home and other stressors, more and more corporates have been signing up with the platforms to provide services for their employees. Sessions on how to manage work and home for women and men alike are encouraged and individual platforms have seen a quantum increase in their engagements. “The openness between employees and corporates has gone up considerably,” says Malik. According to their database, InnerHour has seen a seven-fold increase in monthly downloads, four-fold increase in therapy booking and eight times higher engagement since the pandemic began. Seventy-five per cent of their downloads are now coming from Tier 2 cities, pointing to heightened awareness, across the board about mental health concerns. Other platforms, too, have had to pivot keeping in mind the increased traffic, scaling up their engagement capacity in order to handle queries coming in at all hours, particularly late night. Companies have claimed a 100 per cent growth in queries and several new corporate clients, sometimes numbering in the early hundreds, are being added to their roster. Conducting emotional wellness sessions for corporate employees is now a routine matter. Agarwal feels that most workplaces are still driven by the twin desires of productivity and optics. Hence, the engagement of service providers, like her startup. “Mental health awareness doesn’t come by simply bringing in a vendor. A cultural transformation has to take place, which is beyond HR engaging services and sending out emails. There are still old school companies out there who want to engage services as a way of convincing employees to come back to work. The engagement, to be truly effective, has to move beyond the surface. Right now, baby steps have been taken. We must not confuse them with strides,” says Agarwal.

Since 2015, there has been a steady increase in the number of mental health startups being launched in India, but it is only after 2020 that the sector has started picking up. According to Traxcn, Indian mental health startups raised $20 million between 2016 and 2020. However, the space has already raised upwards of $10 million till August this year. It is good news by any standard considering that even till a few years ago, companies like YourDost were struggling. “We have just closed an investment round with a bunch of global and Indian investors,” says Malik. InnerHour’s team, he tells us, has grown from 18 to 70 in a matter of months. “There is deep interest in the sector and the market has always been bubbling over with lots of small players.” But he wants people to understand that this is not a simple matter of taking a format and applying it to India. “The biggest nuance is to understand user needs. We have to be receptive and respectful of what the user wants. Right now, the space is getting a lot of attention from all stakeholders, be it corporate, investors, etcetera. There is potential to grow a lot.”

But the space is far from being dynamic. Established names may conduct successful rounds of funding, but scalability remains an issue. “Inspite of increased awareness, there is a lot of hesitation around mental health. A lot of time, investors themselves are not well aware of the nuances and this serves as a deterrent,” says an angel investor on condition of anonymity.

The apps come up with innovative ways to engage with their clients. MindPeers, for instance, has a MindCare Index that helps individuals and corporates measure their performance on different metrics like productivity, resilience, empathy, etcetera. Other apps in the space aim at combining mindfulness through yoga, meditation and breathing exercises with personalised plans that strive to cater to an individual’s specific struggles. But to what extent can technology really replace face-to-face interactions? “I think the apps are an add-on to an already existing process. They can aid and abet professional care, but can they substitute it completely? Not in my experience,” says a Mumbai-based therapist who has been on the panel of healthcare apps. But the apps have helped take the conversation around mental health in India further, and any effort in that direction is a welcome effort.