Out of the Pandemic

Putting healthcare centrestage is the first step in overhauling the system 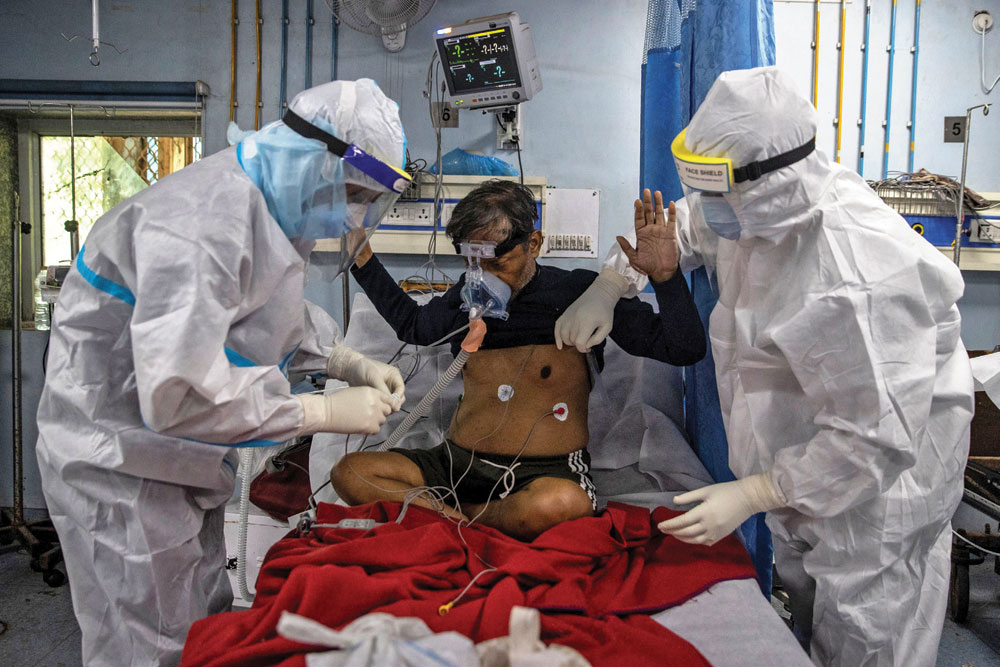 
WHEN FINANCE Minister Nirmala Sitharaman stood up in Parliament at 11AM on February 1st and began her Budget speech by declaring health and wellness to be one of its central pillars, no one was surprised. If not during the pandemic, then when? Sitharaman claimed a 137 per cent increase in allocations on health, a jump that had the potential to take India’s health budget closer to the aim of 2.5 per cent of GDP but as she wrapped up her Budget speech an hour and a half later, it was clear that the fine print had a different story to tell.

Last fiscal, the health ministry was allocated Rs 67,112 crore though revised estimates were considerably higher. This year, the ministry has been allotted upwards of Rs 73,000 crore, a jump from last year’s figures but still lower than the revised estimates. The extras that make up the 137 per cent are Rs 35,000 crore for the vaccination drive underway and funds for sectors such as drinking water and sanitation, linked to health but not typically included under health. A new scheme, Pradhan Mantri AtmaNirbhar Swasth Bharat Yojana, has been launched with an outlay of Rs 64,180 crore for the next six years with an aim to build health infrastructure, such as critical care hospital blocks and public health labs.

Health and wellness, “pillars” for this year’s Budget, are held up by other pillars such as equitable, affordable and accountable healthcare accessible to all citizens. And in India, all these underlying pillars still remain shaky. According to Economic Survey 2020-21, on quality and access of healthcare, India is ranked 145 out of 180 countries. ‘Only few sub-Saharan countries, some pacific [sic] islands, Nepal and Pakistan were ranked below India,’ says the report. The survey goes on to recommend that the focus has to be on building the healthcare system rather than merely on communicable diseases, ‘as the next healthcare crisis could possibly be drastically different from Covid-19’.

For public health expert Dr Chandrakant Lahariya, the 2021-2022 Budget is a well-articulated document but there are more than a few quibbles. The money earmarked for vaccine allotment, for instance, is a good development, he says, “but how will vaccine delivery strengthen the system?” What the Budget needed, according to him, was commitment to schemes in terms of financing that become a “line item in years to come”. One of the objectives as envisaged by the National Health Policy of 2017 is an increase in health spending to 2.5-3 per cent of GDP. Currently it stands at around 1.5 per cent. “If we are looking at 2.5 per cent of GDP, then the trajectory of spending should have been far higher,” says Lahariya though he is hopeful that at least some aspect of the healthcare system will get strengthened.

Some experts are feeling let down, not in terms of policies but funds allocated. Health directly affects the economic growth potential of a country with increased life expectancy alone raising GDP growth rate by over 1 per cent. Out of pocket health expenditures (OOPE) push 7 per cent of Indian families below the poverty line, according to a 2016 paper by US think-tank Brookings. India has one of the highest levels of OOPE in the world. It was precisely to tackle this that the Pradhan Mantri Jan Arogya Yojana was launched but its allocation has remained unchanged year-on-year at Rs 6,400 crore.


More than Rs 35,000 crore has been earmarked for the National Health Mission which focuses on primary healthcare, but again the allocations have only increased at a compounded rate of 4 per cent between 2017-2018 and 2021-2022. “Over the last five years we have been hearing the right kind of noises coming from the powers that be as far as health is concerned. Government documents mince no words when it comes to our healthcare system but very little is being done about it. This year, because of the pandemic, we had an opportunity to overhaul the system entirely but what we have got are tweaks,” says Oommen C Kurian, head of health initiative at Delhi-based think-tank ORF. It was the public healthcare system that stepped up when we really needed it, says Kurian talking about the pandemic, and to strengthen that, reforms have to come from the ground up. This means a focus on capital expenditure, infrastructure building and investment in human resources. “Even now frontline workers are torn between the vaccination drive and regular duties. There is an urgent need to address the deficit of staff.” Investments in terms of basic infrastructure at the block and district levels is a crucial piece to the overhauling of the primary healthcare system, our first defence against any disease. The newly launched Pradhan Mantri AtmaNirbhar Swasth Bharat Yojana, with an outlay of Rs 64,180 crore for the next six years, does aim to address this concern as one of its goals seems to be the development of primary, secondary and tertiary healthcare. The longstanding demand for the regularisation and increase in salaries for frontline workers, such as accredited social health activists (ASHAs), who have been at the forefront in the pandemic remains unaddressed.

However, a key thing to keep in mind is that public health in India is a state subject. The policies and programmes may flow from the Centre but it is up to the state governments to ensure that these are implemented. States such as Arunachal Pradesh, Goa and Kerala spend much more than the national average when it comes to public healthcare, while states such as Bihar, Uttar Pradesh and Jharkhand are among the lowest. “Good policymaking requires sufficient funding but even the funding has two aspects: allocation and utilisation. States need to spend 8 per cent of their budgets on healthcare but we are still near the 4.5-5 per cent mark,” says Lahariya.

The healthcare aspect of the 2021-2022 Budget had an opportunity to be truly dynamic but, experts say, it only meets the bare minimum, especially in the wake of the pandemic. That too is welcome, of course. Economist Shamika Ravi says, “Increased allocation raises long-term productivity. Even access to clean water substantially improves healthcare but the Budget also needs to establish health as an engine of growth.” Ravi argues that with rich countries ageing and the demographic divide on India’s side, there is an emerging healthcare demand that India can cater to but first we have to set our own house in order. “From research and development to HR, to governance, the pandemic could have been for India’s healthcare industry what Y2K was for our IT industry: a chance to pivot, but this hasn’t come into focus. We have to see health through the lens of growth and not just a social vision,” she says Health in India remains as much a matter of fund allocation as governance and the pandemic has shown that for the country to be truly prepared, these have to go hand-in-hand. “The pandemic was the perfect opportunity for the government to go all out but we have let it go. The level of change that the Indian healthcare system needs can come only through substantial funding and bureaucratic will, [with] both the Centre and state working to their full capacity,” says Kurian.