As India looks within to see the future 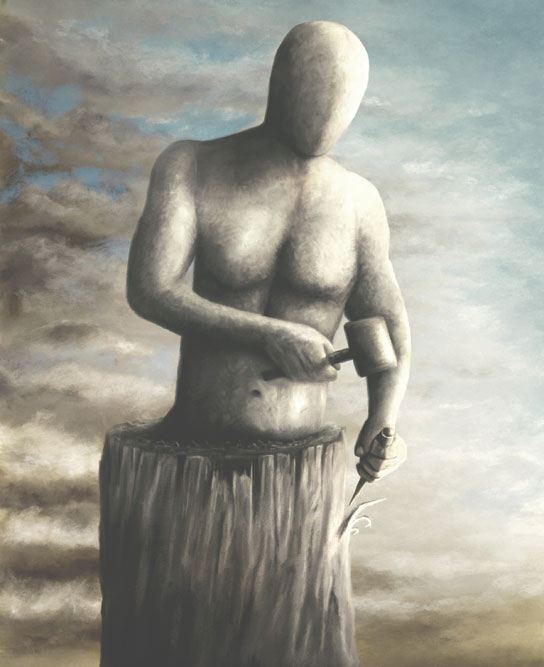 We write about freedom, and bring out a commemorative issue on it, at a time when the most fundamental concept of being in the world is overshadowed by fear. When power has be­come a struggle against the waywardness of the autonomous mind. At this very moment, elsewhere, a leader swayed by the intimations of eternal power and rattled by the free spirit of a neighbour has launched this century’s first full-scale land war in Ukraine. If the deranged

defiance of a time-travelling fascist is bad enough, another eternity-seeking dictator, provoked by the untimely symbolism of a high-profile visit by the US House Speaker to Taiwan, has made the West Pacific the next possible war zone featuring two superpowers. It’s as if the landmarks of conflicts and peace, of fear and freedom, have no permanence in a world where someone in power is always playing out the fantasy of absolute dominion on a fickle global stage. So here we are: the

resolution after 1945 followed by the Iron Curtain; the velvet romance of Eastern Europe 1989 followed by the horror of 9/11; and now, after the peaking of the Islamist bloodlust, the combined paranoia of hurt-ridden Chinese nationalism sustained by a Leninist party structure and a nostalgia-driven Russian redeemer cult has given us another set of bad dreams about the future. For some, freedom is still an armed struggle, and the pursuit of it is worthier than the destination itself.

And we form our responses to the multiple arguments of freedom as a nation with its own memory of struggle. In the solemnity of commemoration, we prefer the loftiness of the backstory of Independent India to the many lacerations of Independence. The loftiness comes from the impeccable moral foundation of the struggle. It took one man’s fierce faith in his ideas of freedom and dignity to convince so many intelligent people that there are times when moral attitudes matter more than armed resistance in the fight against an Empire. India’s freedom struggle, in that sense, was a clash between two value systems. We canonised freedom as the power of truth, even as the ghosts of Partition swarmed the banquet, asking for not justice or retribution but a mere explanation. Aren’t we still trying to formulate one?

Maybe, more than explanation, what we were good at in our infancy as a free country was pedagogy, or enlightened indoctrination by the original nation-builders. It was religion that, in the end, divided the subcontinent, and set off an exodus of mythological proportions, though bloodier and more dehumanising than any god would have prescribed. Post-Independence, the art of nation-building, borrowing from the socialist mission of the perfect future, found itself incompati­ble with the religious impulses of the liberated. So the nation-builders, like those who had won history and were determined to shape it, asked them to behave, and made mechanisms to officially monitor their conduct. But the story of the secular state defied the best intentions of its initial idealists. Isms are bound to become sly enterprises in politics. Those who claimed ownership over the legacy of the freedom struggle used secularism to create communal ghettos. That’s where the ideals of freedom rotted. And that’s where the old pedagogy turned into profanities of politics.

Secular India reached its post-ism phase in 2014, when India’s most popular politician campaigned on a new set of ideals, and like the first nation-builder, he too presented himself as a moderniser, and on the stump, unlike his ideological predeces­sors, he did not travel back to mythology. He too conversed with the future. There was a huge difference though. The original nation-builder thought the modernisation project required ideas—and even ideologies—from more ‘developed’ societies. He wrote lucidly about the cultural making of India. As nation-builder, he found Indian raw material inferior. For the new nation-builder, modernisation is Indianisation with self-realisation. There is no new Indian to be created to perfection, and there is no Book telling him how to do it either. It is all about being conscious of one’s cultural inheritance—and if it has a religious underpinning, so be it. For the West or elsewhere in the East, national identity with a religious foundation is not a point of conflict; it’s an organic evolution. It is too natural to be disputed—or imposed. For India it took seven decades to make it a national conversation. Has it become the unaided definer of its identity? On the 75th anniversary of India’s Independence, in the cultural debate, no other question can be more pertinent.

Still, why is it that the cultural conversation provokes? Is it because of the widening gap between the sophistication of the ruler and the raw passions of the base? Is it because what’s set against the confidence of the leader is the fragility of the cheer­leader’s self-esteem? It’s all happening a bit late in India’s life, and all too sudden, this dismantling of the old scaffoldings and the intoxication of being stakeholders in an unapologetic India that believes in modernisation without cultural inhibitions.

Freedom is power without superimposed adjectives. Its preservation is the test that few pass—and the responsibility that eludes most. As India looks within to see the future, it should find there enduring ways to preserve what it has gained—for the second time.