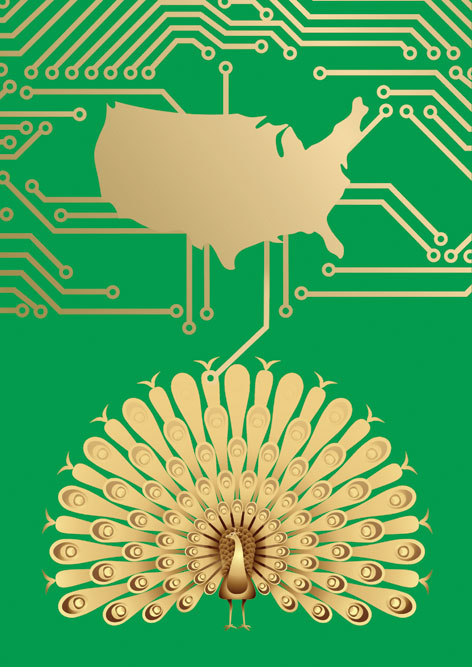 
IN 1963, AFTER an insurance company merged with another in the US, it felt that employees needed something to lift their spirits given the uncertainties they felt would be ahead of them. That is where Harvey R Ball, who ran an advertising agency, came in. Also a graphic artist, he took about 10 days to come with a cheery image. The Smithsonian Magazine, writing about that moment, recounted, ‘The State Mutual Life Assurance Company (now Allmerica Financial Corporation) made posters, buttons, and signs adorned with the jaundiced grin in the attempt to get their employees to smile more. It’s uncertain whether or not the new logo boosted morale, but the smiling face was an immediate hit and the company produced thousands of buttons.’ Whenever you type in a message on WhatsApp and follow it up with a smiley, remember it is an image that took 50 years to make its journey from the US to the shores of India, but once it did, it was incorporated completely. And that is one small bit of the story of how enthusiastically India picks up from the US. For another instance, turn to an era just as social networking was taking off. An entire generation of young India were dazzled by the social networking universe of Orkut. ‘Orkut marriages’ became a term. Then suddenly, en masse, they all just switched over to Facebook, even though no one could precisely say why the latter was better. Common to both Orkut, owned by Google, and Facebook was that they were US stories.

Not just the smiley, think of all the things that you use it on. The mobile phone—an American creation. The Android or Apple software on which that phone runs—an American creation. The application, WhatsApp, on which you key in that smiley—again, born in America. Much of the technology in your office or home either emanated from the US, or was refined and marketed from there in sufficient scale to make it global; the imprimatur of a nation that didn’t vacillate about capitalism like India did, a society unapologetic about wealth creation and so reaping the rewards of it.

In contrast, take the Indian establishment’s historical attitude to technology. In 1977, it forced out the company at the forefront of unfurling the new computerised era, IBM, because politicians wanted to prove their socialist credentials for the next election. The Janata Party Government ordered multinationals to turn over 60 per cent of their holdings to locals and IBM decided it would be better to pack up. As a New York Times article of November 16th, 1977, said, ‘Refusing to bow to the nationalistic demands of the Indian Government, the International Business Machines Corporation announced yesterday that it would dismantle its manufacturing and marketing operations in India…the company said, it will phase out its manufacturing plant in Bombay, thus laying off 175 workers. It will attempt to sell its data center services and card manufacturing operations, and it expects its maintenance operations to be assumed by India.’

What else would have been the consequence of such a mentality shared by both the party in power and the opposition than to keep the country marooned from all the innovations changing the world. What ‘nationalistic’ India did was fund and churn out engineers in IITs who fled at the first opportunity to the US where they would later go on to lead all the biggest technological companies in the world, but as American citizens.


Much of the technology in your office or home either emanated from the US, or was refined and marketed from there in sufficient scale to make it global

It would take the economic crisis of the late 1980s and forced liberalisation to put an end to this delusional hubris of nothing. By then the way to get a slice of the American pie was by providing cheap software professionals through bodyshopping companies like Infosys and Tata Consultancy Services. Everything radically inventive being developed for the internet age, from browsers to search engines to, in the new millennia, social media, were only being used here as tools. The relationship of subservience—US as technology producer and India as its consumer—only entrenched further. Facebook now has the largest number of users—a quarter of a billion—in India, and that means a lot of advertising dollars for the company. China, perhaps for more political than economics reasons, had the foresight to create its own social networking web but India, clueless about what these technologies would mean for the future, simply handed over the space to the US. We contributed to turning startups there into behemoths.

Very little of any originality has come from domestic startups, content to be copycat versions of US models—an Ola for an Uber, a Flipkart for an Amazon, a Hike for WhatsApp

Much of this was played out in areas where the US companies could do initial pickings without having to battle the prohibitive Indian conditions of doing business. Facebook or Twitter didn’t have to deal with the government until they had already captured the market. On the other hand, take Apple, the world’s most successful phone company that decided to just ignore India because they didn’t have the confidence to manufacture here. It is only in recent times that Apple is making some efforts in this direction; even then, it is making refurbishments and cheaper older versions. Or take Tesla, one of the most exciting companies in the US today, which is changing the nature of transportation, ushering in an era of electric vehicles and self-driving cars. Its CEO, Elon Musk, makes token appreciative statements about India, but it is almost a given that Tesla would never come here for a long time because the infrastructure is non-existent. Electric vehicles need to be charged and until there are charging stations everywhere, like petrol pumps, this is a revolution that ends before take-off. Tesla has already got fully self-driving cars on the roads in the US. But for that to happen in India, roads need to be mapped and there must be predictability about the traffic. Just one experience of a US company, Google, makes it clear how deliberately India shoots itself in the foot. Google has for long wanted to do street views of India for its mapping application. Every time it asks for permission, the Government denies it citing security implications. Meanwhile, over 80 other less paranoid countries have already allowed it. The Indian state is so afraid of technology that it stymies it at every corner. Self-driving cars in India will remain a chimera until everyone else has it and by then every offshoot business from such a technology’s presence will be lost. Is it any mystery that when a startup culture eventually got going in India, it was predictably as a mimic. Very little of any originality has emanated from them, content to be copycat versions of US models—an Ola for an Uber, a Flipkart for an Amazon, a Hike for WhatsApp.

AN AREA WHERE techno-cultural mimicking of the US had an outsized impact was on Indian politics. The use of social networking in a manner that fundamentally altered a nation was first done by Barack Obama, who through Twitter mobilised a campaign that catapulted him into becoming President within less than a decade of entering politics. Not only creating an army of the young that got him the Democratic Party nomination, he also collected through small donations vast sums that made big money irrelevant in that election. Indian politicians saw the power of social networking many years after the ball had already started rolling. India’s first Twitter star politician, Shashi Tharoor, who joined the network in 2009, made his tweets initially in a gentler arena. Then Twitter shed its skin to become uglier, unleashing the online Left-Right cultural war, deriving power from a nastiness that left even its founders bewildered. By 2013, five years after Obama’s journey of hope, CNN had come out with a story with a headline that asked, ‘Is the Twitterverse the angriest place on the Internet?’ Both Donald Trump and Narendra Modi are conquerors who rode that metamorphosis, politicians unapologetic about the nature of online politics; who seemed to say that the world is what it is and if you want different rules, play a different game. Trump has 72 million Twitter followers and Modi 53 million. That makes between the two of them 125 million they can speak to directly. An overwhelming number of their followers are people who wouldn’t have been politicised in an offline era. Modi got elected earlier but his online strategy didn’t presage Trump who, already a television star, had made an easy leap to social networking stardom through tweets that drew anger and ridicule from the liberals but were potent in engaging a Right that felt silenced and alienated. Modi found a similar audience in India. The difference is that without Twitter, Trump would never have been President but Modi would still be Prime Minister. Indian politics is still driven by offline permutations and combinations. But, eventually, when literacy and online usage attains a critical mass, there will be a mass leader in India too who will emerge fully formed thanks only to social networking. India always plays catch-up, if the lessons of social networking history are any indication.