Brashness inspired by a Hindi film cannot help in Kashmir 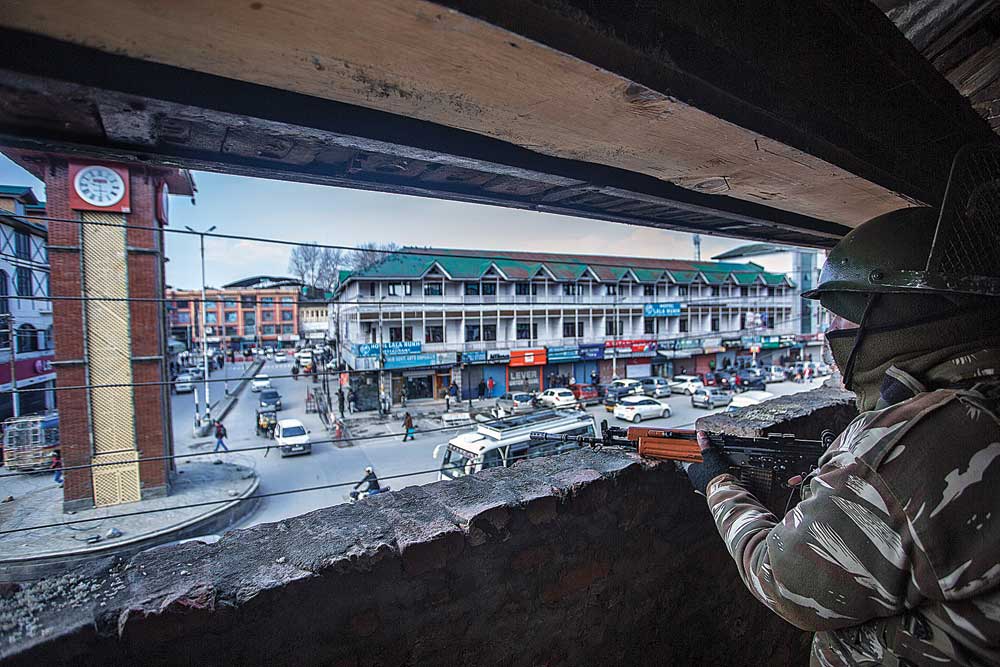 BY THE TIME the sound of gunfire subsided in Pulwama in South Kashmir on February 18th, it was clear that the Indian security forces had suffered more losses than what they had bargained for. Four soldiers of the Army died, including an officer, as they engaged three Jaish-e-Muhammad terrorists hiding in a house. Before the last terrorist fell after a 16-hour gun battle, three senior officers, two of the Army and one of the police, received injuries and had to be taken away for treatment.

Then television took over. Images of fallen soldiers, the honour salutes and emotional scenes filled up living rooms, interspersed with reports of Kashmiri Muslim students being harassed in some parts of the country.

As for the losses in the Pulwama gunfight and the biggest toll taken on security forces in three decades of insurgency in Kashmir four days earlier, there is little mention. Despite the disproportionate losses in the February 18th encounter, the Government’s spin doctors held it as an emollient for the killing of 40 CRPF personnel at a spot not very far from the site of the hostilities. One of them tweeted that the mastermind of the CRPF-convoy attack (Kamran, one of the operational commanders of Jaish, killed in the gunfight) had been killed within 100 hours of the blast; he even used a line from a recent Hindi film on the Uri surgical strike that has become a BJP trope in the last few weeks. The irony of the line, ‘Yeh naya India hai, ye ghar mein ghusega bhi aur maarega bhi (This is new India, it will enter your home and also hit you)’ was lost on many Government supporters like him.

Who got in where and who killed whom? And what new India?

Some critics did post an old video clip of Prime Minister Narendra Modi, taken from his pre-2014 speeches, speaking of the weakness of the then Manmohan Singh regime. In it, Modi berates Singh for being unable to stop the infiltration of terrorists and arms and explosives from across the border. As coffins carrying the remains of the fallen soldiers reached their towns and villages, it became clear that India’s response to terrorist attacks had not changed at all, and that spirit of ‘How’s the josh?’ (‘josh’ as in brio), which had been fetishised for weeks, has been ill-placed all this while.

In Bihar, Modi said that the time for talks with Pakistan was over. He said a fire was raging in his heart. He said that security forces have been given ‘khuli chhoot’ (complete freedom) to deal with militancy. Two days later, a police officer in Pulwama could be seen almost begging a mob that had turned up to disrupt the operation against terrorists to go back to their homes. Modi also said that the neighbouring country had been isolated. Less than 100 hours later, he was hugging Saudi Arabia’s crown prince who had earlier visited Pakistan and promised that country investments worth $20 billion (the Pakistani novelist Mohammed Hanif called it ‘a happy marriage between God and budget deficits’). Many now argue that this is diplomacy and that Modi has India’s best interests at heart. But for those who watched images of Mohammed bin Salman alighting from his aircraft in Delhi, it was hard to ignore the sound of celebratory drums in the background. What part of diplomatic protocol necessitates a nation in mourning to do this?

In the light of the recent suicide attack, it is not enough for the Army to say that anyone who picks up a gun will be eliminated. That the security forces have been doing anyway for years

The candlelight marches will soon be over. The TV cameras will move to humdrum election news. But some questions on Kashmir will remain unaddressed, as always. Does India have a Kashmir policy? It is one thing to invoke insaaniyat and jamhuriyat in a poetic flourish. Humanity and democracy. But what do these mean on the ground? What is the ambit of insaaniyat ? Helping out a people ravaged by floods and ensuring they are not harassed anywhere in the country is a nation’s duty. But does it also mean that a CRPF jawan returning from duty has to silently endure blows from a few men, his helmet being tossed away?

The police and Army will keep on doing their assigned jobs. Terrorists will keep on getting killed in twos and threes. But what will dry up new recruitment? How will many young Kashmiri Muslims quit the path of radicalism?

In 2010, in Kashmir valley, as pitched battles were being fought between the police and young men, I met a small group of college students whom the police were on a lookout for. Having indulged in stone-pelting, they were in hiding. I picked them up from a spot on the outskirts of Srinagar city. As we were driving around to find a suitable place for an interview, two of them on the rear seat began recounting their clashes with security forces. They seemed to have developed a certain ease about the prospect of death. They spoke about how one of their friends had fallen off the banks of the Jhelum river earlier while being chased by the police and how his brains had spilt out. I asked them about Afaq Ahmad Shah, a 17-year-old Kashmiri who had blown himself up in an explosive-laden car in front of an Army cantonment 10 years earlier. They fell silent. Finally, one of them said that he felt uncomfortable with the idea of what Shah had done.

EVEN IN 2010, there was little space left to draw Kashmiri youth from the brink of disaster. But with another Kashmiri blowing himself up to inflict maximum damage on the might of the Indian state, this question needs to be asked: forget josh, do we have any hosh—consciousness—of what we are trying to do in Kashmir? Even after the recent terrorist attack, there seems to be no clarity on how to make proper interventions. The Government put out a list of separatists from whom state security would be withdrawn; within hours, one of the names on it was taken off.

Much of the bipolarity among Kashmiris today stems from Delhi’s own ambiguity and adhocism vis-à-vis Kashmir. Consider the BJP’s fetid alliance with the PDP. In Kashmir, the PDP remained a mascot of soft separatism, while the BJP was seen by many as an ultra-nationalist party. Those who were ‘anti-national’ before 2014 suddenly became worthy of an embrace. That friendship is over, but the damage is done. Under the PDP’s leadership, South Kashmir went out of hands. A Kashmir which hardly raged after the hanging of Afzal Guru turned into a war zone after Burhan Wani’s killing. In village after village, young men either took to militancy or became near-combatants to help terrorists escape security cordons. The police claim that recruitment to militancy has come down, but it would be foolish to assume that more men won’t join terrorist organisations.

What India’s final response to Pakistan will be is not clear yet. A General Election is two months away and the Modi Government is under pressure to prove that he is serious about avenging the attack on the CRPF. Whatever the outcome of that possible step might be, it would be wise to develop a visibly coherent policy on Kashmir.

To begin with, the entire sequence of events leading to the suicide attack on the CRPF convoy must be probed, and security lapses, if any, must be made public. Secrecy around investigations of deaths in action (like in Maoist areas) has been a perpetual problem with the CRPF.

In a message issued a day after the Pulwama gunfight, the operational commander of the Hizbul Mujahideen in Kashmir warned that soon children will be carrying out suicide bombings against Indian security forces. In the light of the recent suicide attack, it is not enough for the Army to say that anyone who picks up a gun will be eliminated. That the security forces have been doing anyway for years, especially in the last three years after South Kashmir flared up.

The thing to worry about is: how does one stop speeding vehicles filled with explosives and driven by a man determined to create mayhem? Because in the end, a Bollywood line will remain just that.