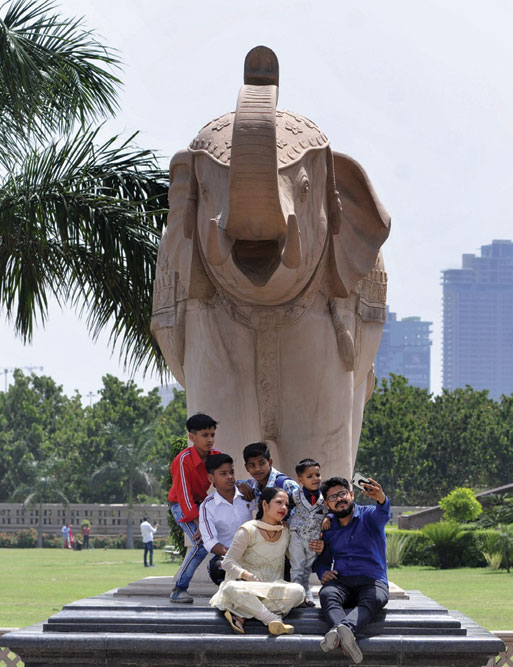 
It might be a matter of some astonishment for Delhi-based political commentators but Dalits in India’s most populous state of Uttar Pradesh (UP) are exploring unconventional political avenues beyond the Bahujan Samaj Party (BSP) and other regional outfits. For a long time in the past, it was believed that Mayawati commanded the overwhelm­ing support of this segment. However, with the emergence of the Bharatiya Janta Party (BJP), Dalits have now become more aspirational and assertive in their democratic articulation. This is sufficiently established by the fact that BJP today has the larg­est number of elected represen­tatives from the community by way of Dalit MLAs and MPs in the state.

Sadly, Delhi’s intellectual elites never made an honest effort to examine conflicting realities when it came to issues and concerns of Dalits in the Hindi heartland. There are segments within this section like Jatavs, Valmikis, Khatiks, Pasis, Koli Kori, Dhobis and so on that need careful study. In the period of BSP’s dominance, Jatavs among Dalits were one of the key beneficiaries owing to their numerical majority and a disproportionate presence in government and education. The other communities within the Dalit fold did not benefit much under Mayawati’s regime. Therefore, to reduce the Dalit discourse in the state exclusively to the BSP story is manipulative and increasingly misleading.

Over the course of the last seven years, politics in UP has been witness to a robust socio-political churning. New-age Dalits are seeking respect, recognition and representation. The traditional idea of Bahujan politics is no longer a reality. Had it been so, the Samajwadi Party (SP) and BSP alliance would not have done as badly as it did in the 2019 General Election. To elucidate this point further, so­cial thinker Badri Narayan in his book Fractured Tales observes: “I found that only a section of Dalits had the power to talk about their desires, hopes and expectations while the greater majority of the Dalit communi­ties, although now voting for BSP, continued to live in the silent zone, as they had done for many centuries. Neither did they have any visibility in Dalit politics nor…any voice to claim the rights that BSP had provided them. Even the Dalits who could speak, although they were politically aware, were still highly marginalized socially and economically. Though the image of Dalits that is emerging in the prevailing political discourse of the country is that of a monolith, if someone studies Dalits for a long period, one will find that the Dalit subject is irretrievably heterogeneous and there exist multiple marginalities among them that are constantly being produced and reproduced.”

It becomes pertinent here to understand that the Dalit discourse is constantly evolving and must not be viewed from a perspective of a political party or an individual.

Icons have always played a significant role in the Dalit imagination. BR Ambedkar is revered as a deity among all Dalit communities in UP as in other parts of the country. We have seen extreme violence in the past related to desecration of statues and symbols of social justice across the country. In 2016, while inaugurating a Haj house in Ghaziabad, Azam Khan, a senior SP leader, had called Ambedkar the largest land mafia of the country, saying that every statue of Ambedkar is an indication of such land occupation. Khan, a self-declared leader of the Muslim community, stuck to his remarks seen as a very con­descending attitude towards Dalits. It must be noted that neither he nor his party issued a clarification or an apology with respect to that statement in the last six years. This is nothing but a reflection of the anti-Dalit mindset of SP that is a claim­ant to Ram Manohar Lohia’s legacy. It must also be recorded that SP’s national president, Akhilesh Yadav, was present on the occasion and chose to maintain a strategic silence on the ignorant and contemptuous reference to the architect of our Constitution. Surprisingly, Akhilesh, two years later in one of his articles for a national daily, said, “Our country is the largest democracy in the world and its unique constitutional frame­work was decided by our great founding fathers, including BR Ambedkar” (‘When Ambedkar and Lohia meet’, The Indian Express, August 18, 2018). You either take Dalits for granted or have no time for self-reflection. This hypocrisy and duality is not a given in the nature of the emerging social justice discourse being perverted by the likes of SP.

SP’s stand on reservations in promotions is an open se­cret. On the floor of Parliament, the party not only opposed the policy for ensuring representa­tion of Dalits but also had the audacity to demote lakhs of Dalits who had been promoted by the UP government. More than two lakh government em­ployees were demoted by the SP government as per reports. In 2016, scholarships meant for the welfare of SC and ST students were also stopped on the insistence of the SP leadership.

Whatever happened in Hathras (the rape-murder case of 2020) was unfortunate and the government is committed towards delivering speedy justice to the family of the victim. Can we forget the condemna­tion of the United Nations of the rape and murder of two minor girls from the Dalit commu­nity in Katra Sadatganj area of Badaun? From a party wherein the patriarch makes statements in defence of heinous crimes like gangrape, what else can be expected? Addressing a huge rally in Moradabad, then SP President Mulayam Singh Yadav had said: “Ladke hai, ladko se galti ho jati hai”. When there is institutional patronage for crime and criminals, serious offences are committed on an everyday basis. National Crime Records Bureau (NCRB) data suggests there is a substantial reduction in offences like kidnapping, rape and murder that used to dominate news headlines.

The biggest victims of a flailing law and order are the marginalised sections of society. Therefore, with peace and stability in society, Dalits tend to benefit relatively more than other communities. Talking of violence, can we forget the blot on our national conscience when a woman, a Dalit leader, was assaulted in the infamous guesthouse episode? For a party like SP that is anti-woman, anti-Dalit and anti-development, one cannot and must not expect de­livery on the rhetorical promises made by Akhilesh Yadav.

Mayawati, with BJP’s support, became the first Dalit woman to rise to the highest executive position in the consti­tutional scheme of governance in a significant state. Dalits of UP have been a silent witness to this transition. From making Mayawati chief minister to constructing a Panch Tirth for Ambedkar, BJP has ensured respect and representation for Dalits. It is remarkable to see the steady rise in representa­tion of Dalits in both the party and the government. From three governors to the highest ever number of Dalits in the council of ministers to 12 key organisational positions like those of general secretary at both national and state levels.

From Saharanpur (rural), an unreserved constituency, a Dalit, Jagpal, formerly a key aide of Kanshi Ram, has contested on a BJP ticket. Similarly, from Karhal, another high-profile unreserved seat, SP Singh Baghel, an SC, has contested against Akhilesh. This is a welcome trend of fielding SC candidates in unre­served constituencies for state Assemblies and Lok Sabha. There is no binding regulation on parties to give representa­tion to Dalits in Rajya Sabha but the recent nominations of Brij Lal (former DGP) and Kanta Kardam to the Upper House is a sign of the times to come.

I sincerely hope that this is just the beginning of a journey to realise Babasaheb Ambedkar’s vision.

Guru Prakash
Guru Prakash teaches at Patna University. He is a BJP spokesperson