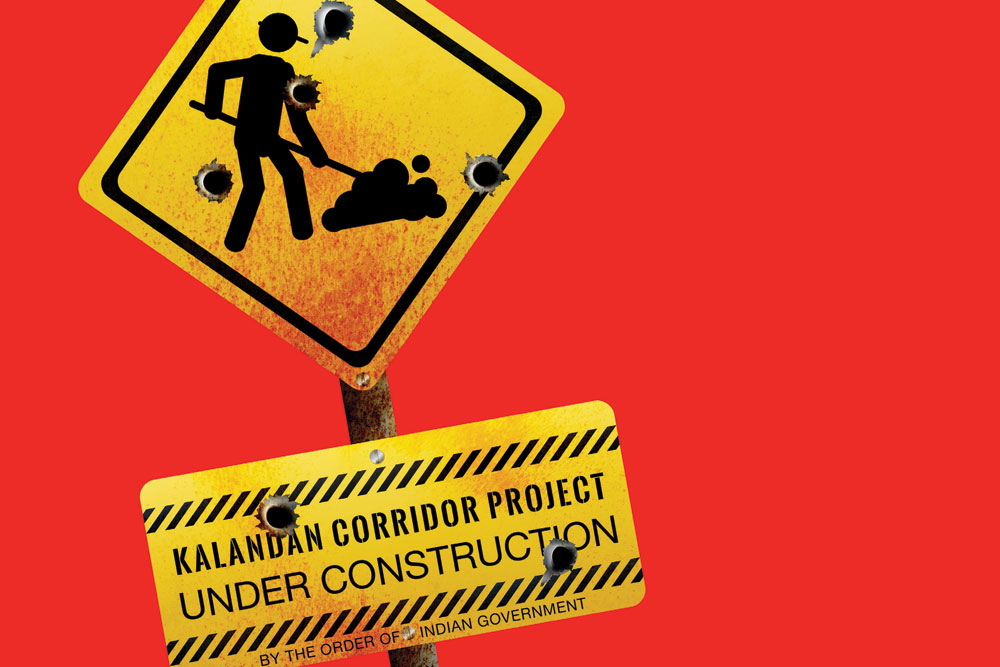 MYANMAR HAS LONG been an important element in India’s ‘look east/act east’ policy. In recent years, it figured prominently in India’s strategy to mitigate its vulnerabilities in the Siliguri Corridor, the so-called Chicken Neck, which is India’s only lifeline to the country’s Northeast. China’s gambit at Doklam in 2017 and subsequent 2018 claim that Doklam is Chinese territory, reminded Raisina Hill how vulnerable the Siliguri Corridor is to Chinese misadventurism.

The Chicken Neck connects India to its 40 million citizens in the Northeast via this 22-kilometre stretch in West Bengal and bounded by Nepal to the west, Bangladesh to the south, Bhutan to the northeast and Sikkim, which borders China, to the north. The kukri-shaped Chumbi Valley in Tibet cuts between Sikkim, which India annexed in 1971, and Bhutan. At its narrowest, it is a mere 27 kms wide and 60 kms at its widest. The corridor facilitates commerce and tourism while serving as a lifeline for India’s military formations in the Northeast which will confront China during a conflict along the Line of Actual Control. The precarity of the corridor has long discomfited India’s security elites, but the events in 2017 and 2018 denervated these concerns.

Unfortunately, India has been trying to catch up to China, which has industriously engaged in infrastructure projects in the area from the 1980s. Notably, China built a road in 2005 (and possibly earlier) a meagre 68 metres from the Indian border post at Doklam, putting the road within visual range of India’s forces. In 2017, Chinese People’s Liberation Army (PLA) engineers began building a motorable road which extended to the Bhutan army camp at Jampheri, galvanizing Indian pre-emptive action which culminated in the 2017 standoff at Doklam. By extending this road, China positioned itself to close the Siliguri Corridor which would complicate Indian resupply of the three primary military formations in the Northeast.

To mitigate India’s dependence upon the Chicken Neck, India embarked upon the Kaladan Multi-Modal Transit Transport Project, which would be a redundant, but shorter and potentially cheaper, supply route. Instead of undertaking the precarious journey through the Siliguri Corridor, goods would be loaded to ships harboured in Kolkata’s port and traverse 540 kms across the Bay of Bengal to the port India recently completed in Sittwe, sitting at the mouth of the Kaladan river in Rakhine. Goods would travel some 158 km on barge up the Kaladan river to Paletwa in Myanmar’s Chin State from which they would move another 110 kms by road from Paletwa to the border town of Zorinpui in Mizoram and onward via the National Highway-54. If this corridor were to be fully functional, transit distances would be slashed from 1,880-kms for the Chicken’s Neck to 950-kms by Myanmar.


If and when it fructifies, the Kalandan corridor will be the shortest route connecting India’s northeastern states to a port. Such redundancies are strategically important in the event of a conflict with China

While the economic viability of the corridor was questionable due to a parallel—but equally fraught—route connecting Bangladesh’s Chittagong port, via bridge over the Feni River, with Tripura, this route, if and when it fructifies, will be the shortest route connecting India’s northeastern states to a port. However, such redundancies are strategically important in the event of a conflict with China.

Over the last decade, Rakhine garnered international attention due to the multi-phased Rohingya crisis. These concerns hit a crescendo after Myanmar’s military conducted brutal operations in response to the attacks of the Arakan Rohingya Salvation Army (ARSA) savagely assaulted several police posts in August 2017. This military operation displaced some nearly one million Rohingya to Bangladesh, in what the United Nations has called a ‘textbook case of genocide.’ However, this conflict was most concentrated in northern Rakhine state and had little impact upon the Kaladan Corridor project.

However, over the past several months, central Rakhine state has been wracked by a new conflict: fighting between the Tatmadaw and the Arakan Army (AA), which is a well-trained non-state militia that enjoys widespread support among the state’s Rakhine Buddhist population. The AA, while formed in 2009, had not figured prominently until early 2019. The AA’s recent mobilisation reflect long-festering Rakhine frustration with Naypyitaw’s neglect of the state, Burmandomination of the civil service and other government apparatus governing the state, lack of federalism which would provide the state significant measures of self-governance as well as perceived Burman ethno-centrism which holds the country’s non- Burman ethnic groups in low regard. While this disaffection with the central government has its origins in the earliest days of independent statehood, Rakhine Buddhist grievances have been exacerbated by the attention and resources Muslim Rakhine (or ‘Rohingya’) have received in recent years. The state’s ethnic Rakhine Buddhists believe that their legitimate grievances have received little attention and little reward for their general demurral of violence. In fact, the AA has rightly concluded that in Myanmar, ethnic groups only garner the attention and resources of the state if they fight.

While the Sittwe Port may not be the lynchpin in an alternate supply to the Northeast, it tosses the under-developed Rakhine an economic lifeline that can afford it some strategic independence from Yangon

This fighting is taking place in areas that have direct impact upon the Kaladan Corridor. After all, the port is just the first necessary but insufficient piece of the transport puzzle. For the port to service India’s strategic aims, the river must be dredged, and most of this work needs to take place where the fighting is ongoing. In addition, roads must be built to connect Paletwa, in Chin state, to the Indian border at Zorinpui, which has its own frustrating and challenging terrain. Moreover, roads are needed to connect Zorinpui to the National Highway, which is also part of the larger East-West Corridor highway effort. (On the Indian side, roadwork has been delayed by years due to local labour disputes which have led to an ‘indefinite’ strike.)

The timing is unfortunate. China has had a long head start. It has been busy building infrastructure in the state, including a gas terminal and gas transit based at Kyaukphyu. While Rakhine desperately could benefit from its own gas to provide energy to fuel factories which could employ Rakhine, China is moving this gas via pipelines to Kunming, in China’s Yunnan province.

All is not lost, however. This project can offer Rakhine’s citizens employment opportunities in constructing and maintaining the corridor, which will help mitigate some of the Rakhine’s grievances if local Indian interlocutors can make this point effectively.

Most importantly, while the Sittwe port may not be the lynchpin in an alternate supply to the Northeast, it tosses the under-developed Rakhine an economic lifeline that can afford it some strategic independence from Yangon. Moreover, while India can use this port to export goods that are in a critical shortage in Rakhine, such as steel, this will be a good opportunity for Rakhine to develop products that may be exported to India, such as the region’s unique forms of rice. Given the imminent danger of climate change, the deltaic portions of Rakhine will also have to consider planting new varietals of rice that are robust to saline-contaminated brackish waters. So far, the Rakhine have been unenthusiastic about this because the new varietals require new cultural farming practices. Besides, the people of Rakhine do not find these varietals suitable to their palettes. However, given that India uses food as important forms of aid to Afghanistan and elsewhere, this may provide an opportunity to incentvise Rakhine farmers to switch to climate change-resistant varietals and provide the state with an important source of export revenue. While the Kaladan Corridor may not advance India’s interests in Myanmar as originally envisioned, the potential remains to help transform the lives of people in Rakhine.

C Christine Fair
C Christine Fair is a professor at Georgetown University in the Security Studies Center. She is the author of Cuisines of the Axis of Evil and Other Irritating States; Fighting to the End: The Pakistan Army’s Way of War; and In Their Own Words: Understanding the Lashkar-e-Tayyaba

A New Sharif in Islamabad