×
Demonetisation: One Year After

For a cleaner, fairer and faster future 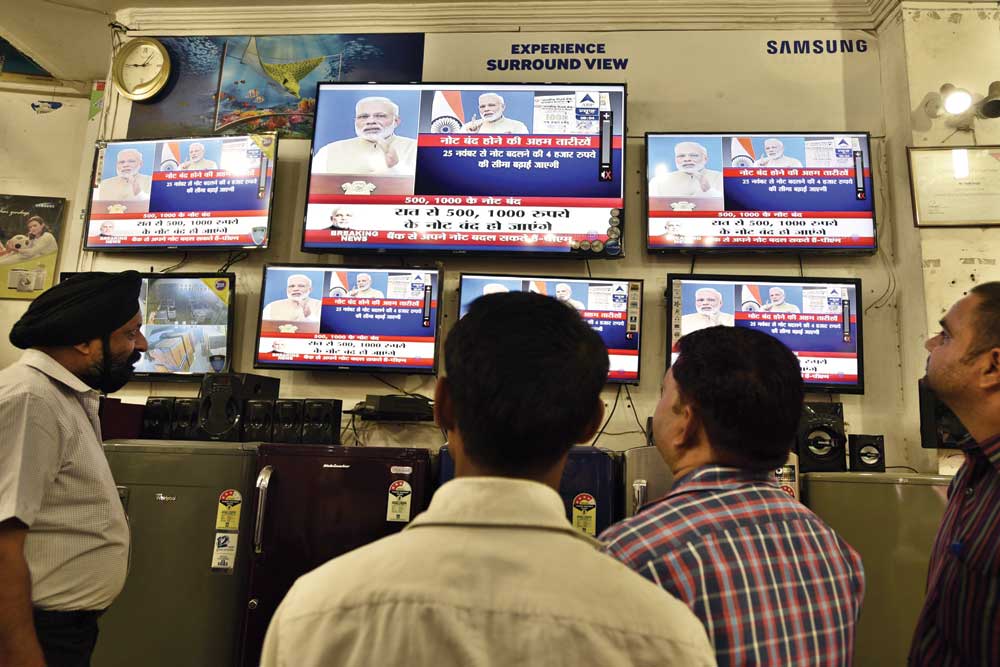 IN THE 21ST CENTURY, disruption is the key to advance and progress. In the English language, that may sound counter-intuitive. As it might for practitioners of government in India. India’s state apparatus has been a great disruptor for the last 70 years, across two centuries—in the cause of progress, for the goal of advance. The disruptive, interventionist and interfering administrative and policy practices of the Indian state date back to the 19th century. As does the traditional definition of ‘disruption’. Today, it isn’t about value destruction. It is about a new creativity with the potential to transform lives. The only thing in common between the disruption of the old and the new is that there will be a set of losers. In the new disruption, many more will be winners. New technology may destroy some old jobs, but it will create newer, better ones. Narendra Modi is India’s first 21st century politician, the pioneer who embraced the technologies and possibilities of the first 15 years of the century while his peers stood frozen in the old world. Unsurprisingly, Modi understands the power of disruption as well as its consequences. If he did not, it is highly unlikely that demonetisation would have been announced on the evening of November 8th, 2016.

Those who damn demonetisation as ‘flawed economics’ or ‘populist politics’ fail to grasp the power of a disruptive idea and its consequences. When Prime Minister Modi said that the withdrawal of high-value currency notes (or 86 per cent of the total circulation) was intended to strike a blow on black money, counterfeit currency and terrorism, he did not mean that any of the three would disappear overnight or even in a matter of months. Black money (and the parallel economy), counterfeiting and money-laundering for terror-related activities had entrenched themselves deeply, creating power constituencies across business (big and small), politics (national, regional, local), various mafia and groups of ordinary citizens who depended on the rotten system to deliver basic necessities.

It is easy to argue that several measures other than demonetisation ought to be used to tackle these problems. Indeed, several have been deployed over the years, but none of these, by themselves, is sufficient to dislodge such a well-entrenched system of mala fide activity. The perpetrators could always be rest assured that the Government would not come after them with all its might. Until the evening demonetisation was announced.

Unlike any other measure, it would directly affect every resident of India, without exception. It was not aimed at any particular constituency or set of constituencies. It was highly risky for the Government, as a majority of residents who did not possess any black money and who were law-abiding would face hardship in the short term. It also entailed risk because there was every possibility that there would be no immediate gains—they would instead accrue over time—whereas the hardship would be immediate. It was very popular, if opinion polls and the UP election were accurate indicators, despite the criticism it received from sundry pundits.

Demonetisation may have induced a behavioural change in citizens. The number of new persons filing tax returns has gone up sharply post-demonetisation

The critique of demonetisation has centred around the fact that some 99.5 per cent of the demonetised currency found its way into bank accounts. Therefore, no black money was destroyed and thus demonetisation failed in its primary stated objective. Of course, it would have been ideal if a substantial amount of black money was simply destroyed, but it was always unrealistic to expect vested interests to part with their wealth so easily. The manner in which several banks or their employees colluded with black money holders was only added evidence on how deeply embedded the parallel economy was.

However, critics choose to overlook the fact that not all the money deposited into bank accounts automatically becomes legitimate. Importantly, demonetisation may have induced a behavioural change in citizens. The number of new persons filing tax returns has gone up sharply post-demonetisation. An additional 5.6 million persons filed Income Tax returns between April and August 2017. A number of people also availed of the amnesty scheme that the Government offered. In addition, several other suspicious accounts are being scrutinised and taxes and penalties imposed. Overall, 1.8 million accounts have been found with average deposits above Rs 2.5 lakh where the account holder’s deposits do not match their income profile. There can be little doubt that many more Indians are now in the tax net after demonetisation, either voluntarily or involuntarily. This is critical in a country that has an abysmally low tax-GDP ratio of around 17 per cent, which is half the average of developed countries. Given the country’s spending requirements on infrastructure, both physical and social, increasing the tax base is potentially transformative.

The other lasting transformative effect of demonetisation is its nudge towards a less cash, digitally-driven economy. Again, it is not a transformation which will happen rightaway, but there is no denying that people who would otherwise have never used digital transactions are now doing so. Significantly, there seems to have been a structural shift in favour of digital payments even though the number of such transactions may have fallen from their peak once the economy was remonetised. A paper by Rupa Subramanya, economist and journalist, for the Observer Research Foundation (March 2017) crunches several data sources to conclude a behavioural change, adding much-needed rigour to a debate that has too often taken place in the absence of evidence.

It isn’t common for governments to get disruptions right anywhere in the world. Historically, market forces and technology have combined to do it better

The structural shift towards digital payments is quite intuitive. Everyone who was using cash wasn’t doing so to avoid taxes, though a small minority may have done. A big majority of Indians were simply not exposed to the possibilities and instruments of easy and cheap digital transactions. Demonetisation not only nudged people to try out digital mechanisms, but also led to innovations in the digital payments space which have enabled people to transact easily and at low cost. The Bhim app developed by the Government is only one such example.

THERE WAS ALWAYS bound to be noisy opposition to demonetisation, given that it would strike at the roots of firmly entrenched vested interests. Several economists provided intellectual cover by succumbing to their professional obsession with the short run—sorry John Maynard Keynes, but there is a long run in which we are alive! Those economists argued that demonetisation would lead to a drastic fall in economic activity, in particular damaging small businesses and wage labour, the most vulnerable stakeholders in the economy. Indeed, there was short-run disruption, though clearly not of the catastrophic scale prophesised by the measure’s opponents. And it is precisely the most vulnerable stakeholders of the economy who pay the heaviest price of the old order characterised by corruption and tax evasion.

Last month, American economist Richard Thaler won the Nobel Prize for his research in the domain of behavioural economics, a relatively new branch of the discipline which eschews some of the assumptions of mainstream economics and gives more weight to frailties in human decision-making. While there was a raging debate (at least on social media) on how fully Thaler supported demonetisation, he did acknowledge its potential in nudging people to change their behaviour, something which seems to be happening. Clearly, the practitioners of this new economics, along with the practitioners of technology and innovation understand the power of disruption to alter the normal course of history.

It isn’t common for governments to get disruptions right anywhere in the world. Historically, market forces and technology have combined to do it better. Market forces have not been able to disrupt India’s deep rooted corruption. If anything, post-1991, India’s vested interests took over market forces, unleashing virulent crony capitalism. To even begin to uproot the old order would have required a bold intervention. Prime Minister Modi unleashed a dramatic disruption. In doing so, he has sent out a clear signal that India’s future trajectory will be different from its past. It will be cleaner, fairer and faster. And while cheering a better future, for once no one will shed tears for the losers—tax evaders, crony capitalists, counterfeiters—from a disruption.