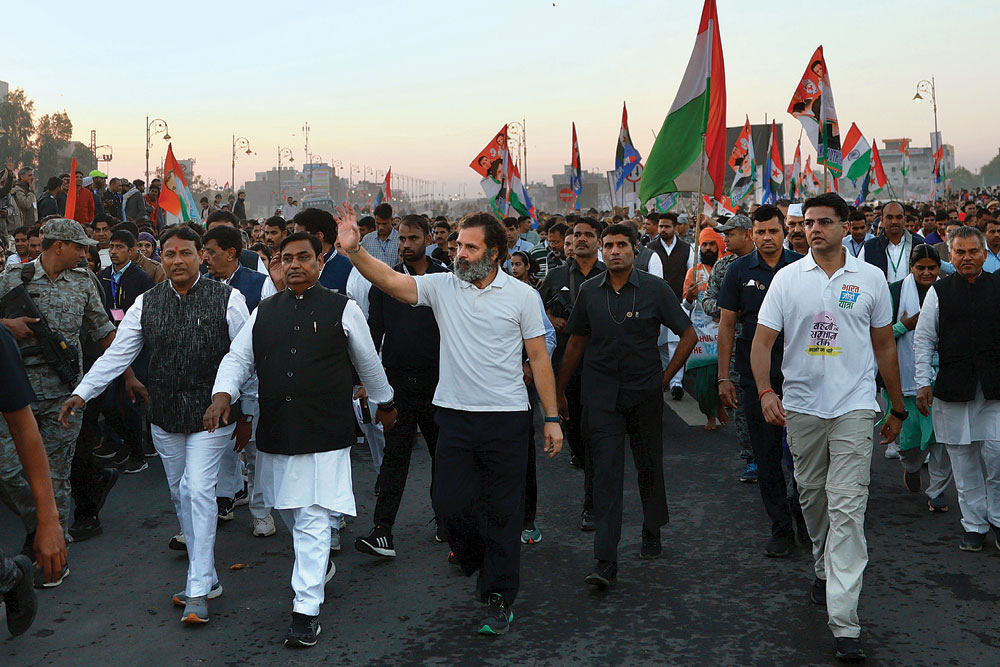 
A WIN IN HIMACHAL PRADESH, WHERE Congress smartly rode anti-incumbency and unabated factionalism in the Bharatiya Janata Party (BJP), has saved the party its blushes in the second round of Assembly elections this year when it was in serious danger of drawing a blank again. The party leadership is now scouring for a chief minister among depleted ranks with some of its senior leaders having abandoned ship before the election. The state, in the end, stuck to its revolving-door reputation, even as contests were settled by small margins. The good news in the hill state, however, may remain a flash in the pan if more fundamental issues are not addressed. And these were painfully evident in Congress’ rout in Gujarat where its vote share fell to a little more than 27 per cent. More starkly, it was leading in just 17 seats on December 8 evening, a dramatic fall from the 77 it had won in 2017. In Delhi’s prestigious municipal polls, Congress finished a poor third with a shade under 12 per cent votes. Having dipped to a 4.2 per cent vote share in the 2020 Assembly election, almost anything would be an improvement and the slight rise in Congress support came by way of Muslim and some slum votes that helped it win seats in northeast Delhi. While Congress dispatched senior leaders to Shimla to assess candidates for the chief minister’s post, it was ironic that Rahul Gandhi, who is on his Bharat Jodo Yatra, has had little role to play in the party’s success, having barely campaigned for the Assembly polls.

With the counting of votes running close in Himachal Pradesh, recently elected Congress President Mallikarjun Kharge was cautious in his interaction with the media on December 8 afternoon, saying it was too early to offer a comment as trends needed to solidify. But by late evening, Chief Minister Jai Ram Thakur had conceded defeat. Congress is bound to draw solace from its success in the state and this will help to some extent in countering the growing view that it is incapable of putting up a fight against BJP in one-to-one contests. Yet, apart from Chhattisgarh and now Himachal, Congress does not look like a fighting force in most other states. Its affairs in Rajasthan are in a mess, riven by factional rivalries and its hopes in Karnataka hinge on BJP’s troubles in managing a leadership change. Looking ahead, Congress will hope that situations similar to those that plagued BJP in Himachal might provide an opening in Madhya Pradesh. But this is largely a reactive strategy. The recently concluded election for party president exposed serious divisions, with an attempt to get Rajasthan Chief Minister Ashok Gehlot to accept rival Sachin Pilot as his successor backfiring in spectacular fashion. Not only did a majority of Congress MLAs side with Gehlot but the chief minister too made it clear that he was not interested in trade-offs to become the ‘official’ nominee for party chief. The bitterness has lingered and he lashed out at Pilot afresh in November when he said a traitor could not be chief minister. It is clear that Gehlot continues to suspect plots against him, possibly with the backing of the party bosses keen to cut him to size.


The chief concern for Congress leaders is the need to find a credible narrative that will erode Prime Minister Narendra Modi’s aura as a strong and decisive leader with a popular connect. At the heart of the problem lies the unresolved leadership issue despite Kharge’s elevation as party chief. The focus of the party organisation continues to be on Rahul Gandhi, with his aides projecting his current yatra as a major effort to reboot Congress. Yet, in the course of the yatra, Rahul has not been able to bring together warring factions in Kerala and Karnataka despite some show of unity. Worse, he has not helped the party’s cause by being seen in the company of activists like Medha Patkar who is a political red rag in Gujarat. During his Maharashtra leg, Rahul disparaged Hindu Mahasabha leader Veer Savarkar as someone who received a pension from the British. By dipping into a trope propagated by Hindutva’s opponents, the Congress leader managed to rub ally Shiv Sena (Uddhav Thackeray) the wrong way, drawing a sharp rebuke from the Maharashtra party. It is unclear how these missteps occurred. Whether they were part of advice rendered to Rahul or random occurrences. The net result was that the interventions did little to help Congress and reprised concerns that Rahul has failed to draw the correct lessons from the 2014 and 2019 Lok Sabha failures where personal attacks on Modi and criticism of the RSS-Sangh did not work. If an unstated fear that 2024 might go the same way, adding another failure to his CV, is a reason for not formally occupying the president’s post, a proxy, even a respected veteran like Kharge, may not change things much.

Kharge taking charge may mean restoration of normal political activity at the party headquarters. An experienced politician, he will be available to party seniors who have complained that Rahul is not accessible

KHARGE TAKING CHARGE MAY MEAN RESTORATION of normal political activity at the party headquarters, something that has not happened for a while. An experienced politician, he will be available to party seniors who have complained that Rahul is not accessible. He will also be on a similar wavelength with most of them, having worked in the organisation and in government over several decades. The test lies in organisational appointments that will be made ahead of Assembly elections next year and the Lok Sabha polls thereafter. A major source of discontent, one that fuelled the dissidence of the ‘G23’ group of seniors, was the appointment of relatively inexperienced Rahul cronies to key positions to oversee major states and run strategy in Parliament. It has often been the case that tactics for the day in Parliament are telegraphed by conduits in the morning to some MPs while the rest find out later. This led to the progressive distancing and final exit of veteran Ghulam Nabi Azad from the party. In Lok Sabha, articulate leaders like Manish Tewari and Shashi Tharoor have been overlooked in favour of Adhir Ranjan Chowdhury, despite the Berhampore MP’s limitations in making a point from the opposition benches.

The session of the All-India Congress Committee (AICC), expected to be held early next year to formally endorse Kharge’s elevation, is also likely to be the setting for an election to the Congress Working Committee (CWC) that dissidents have been demanding. Such an election was last held in 1997 when Sitaram Kesri was party president and, as per the scheme, 12 of 23 members are elected and the rest nominated. Elections to CWC are not easily predictable even with a curated list of AICC members. They do reflect the popularity of some leaders and it is not without reason that the party leadership has opted for the nominated process since Sonia Gandhi took charge in 1998. The election to CWC at Tirupati in 1992 after PV Narasimha Rao became prime minister saw the election of heavyweights like Arjun Singh and Sharad Pawar, a development that displeased Rao. The elected members were made to quit on the pretext that women and weaker sections were not represented, leading to Rao nominating the entire CWC. How the Gandhis and Kharge negotiate the CWC elections is a keen test just as it will be for disgruntled seniors keen to gain a say in party affairs.

In the course of the Yatra, Rahul has not been able to bring together warring factions in Kerala and Karnataka. Worse, he has not helped the party’s cause by being seen in the company of activists like Medha Patkar who is a political red rag in Gujarat

Apart from its organisational issues, Congress faces a tougher task in taking on Modi in a national election. The opposition party has not been able to move beyond a reflexive criticism of the government, the latest example being its decision to review its support for quotas for economically weaker sections upheld by the Supreme Court. Congress, as has been the case in the past, runs the risk of making upper castes apprehensive without any significant gains among backward castes, Dalits and tribals. Meanwhile, elections held after the onset of Covid indicate that the Centre’s welfare outreach is working as it supports poor families. Despite higher food and oil prices due to inflation worsened by the Ukraine war, there is no public anger against BJP as the results to the highly urban Delhi municipal polls indicate wherein the Aam Aadmi Party (AAP) won but did not quite capitalise on a largely bipolar contest as it had in the 2020 Assembly polls. With inflation tapering and growth steadying, the Modi government is well placed to push its economic agenda based on higher capital expenditure and reforms that encourage innovation and startups. On the international stage, the prime minister has emerged as a key player with access to leaders on both sides of the Ukraine divide. India’s G20 presidency is set to be the stage for a massive promotion of Indian products, skills and culture. The next Lok Sabha polls will be about a third term for Modi and Congress will need more than halfway-house solutions to pose a challenge.