Where the image ends and the self begins 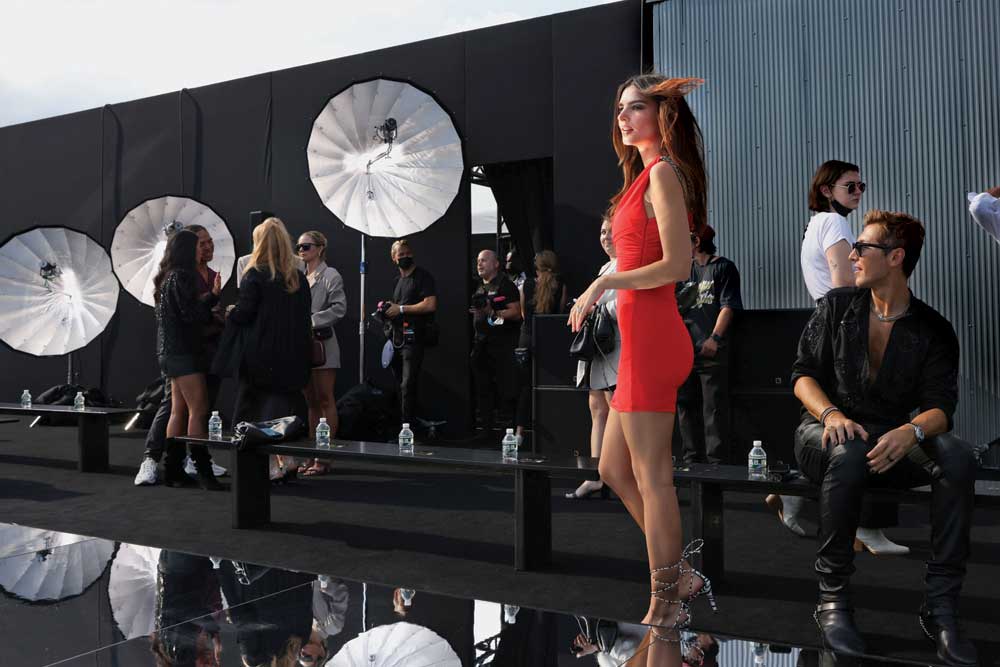 
Emily Ratajkowski and I have nothing in common. She is a model and an actress. She has close to 30 million followers on Instagram. Wearing platform white sneakers, shorts covered in plastic, chili-red lipstick, and often seemingly naked, she happy-dances through Robin Thicke’s Blurred Lines music video to the catchy riff “Everybody get up (hey, hey, hey).” Released in 2013, the video, which is now available in ‘censored’ and ‘uncensored’ versions shot her to fame. She has appeared on the cover of the erotic magazine treats! seated nude on the floor, with one hand in her hair, and the other draped over her legs. She has often made it to the ‘sexiest women in the world’ lists. It would be safe to say, I have none of the above-mentioned attributes, nor will my portfolio ever boast of such feats. However, I enjoyed reading her recent memoir and collection of essays titled My Body (Quercus). Her model struggles are not relatable, but they are relevant. Her book tells us how our bodies are our vehicle, our weapon, our vulnerability, our definition; and ultimately ours to do what we want with. She writes from a place of privilege but her extreme version of reality foregrounds our own questions around power, beauty and lovability.

Her ridiculously symmetrical face and lean body are what she is best known for. But neither of these graces the cover of her book, which simply sports her name and the book title. It is a smart choice since, while the book is very much about her body, it is also about her winning it back, about her reclaiming ownership of it—not through images but through text. Often hailed (or belittled, depending on whom you ask) as the “thinking man’s naked woman” she now reckons with the fact that “women who gained their power from beauty were indebted to the men whose desire granted them that power in the first place.” Through her writings, she attempts to recalibrate these power equations.

One would not go so far as to claim that Ratajkowski is a trailblazing feminist. Bestowed with ‘good’ looks, her act of self-love is reconciliation, and not revolution. Women who are traditionally sexually marginalised—on the basis of colour, shape, class or disability—will find no flagbearer in her. What one can find in her book is an admission of vulnerabilities and a quest to be defined as more than the body, even while profiting from it.

My Body navigates the tricky terrain of desire. Ratajkowski’s asset is that she can invoke desire. Men will pay her $25,000 so that they can be seen attending the Super Bowl with her. Desire follows a personal metric followed by certain social cachet. In her case, as a recognisable beautiful woman, men merely want to be seen with her. They are paying for her appearance, not her personality.

In her book The Right to Sex Amia Srinivasan complicates desire. She writes, “We might attempt to draw this line—between those causes of undesiredness that are and are not facets of oppression—by distinguishing between good and bad reasons for desiring someone. But what is a good reason for desiring someone? If not her body, then what about her mind? The beauty of her soul? Is the beauty of our souls up to us? Does it matter? Should it?”

Srinivasan’s argument interestingly complicates the hierarchy between desiring someone for their body as opposed to their mind/soul. If our beauty is an inheritance and has nothing to do with us, what about our mind/soul? Isn’t that also a product of ancestry and genes? And finally, as she asks, do the reasons for desire even matter?

While most women would not have experienced Ratajkowski’s trajectory of body as commodity, all women have dealt with issues of body as identity. Ensconced in the “petite” end of the spectrum, I often wonder what it is like to be a tall, big-boned woman. What is it like to see above heads in a crowd and not through elbows? What is it like to make three pleats rather than 10 pleats while draping a sari? But more importantly, would an extra foot in height change how I truly see the world and how the world sees me? Would I be paid more? Or, perhaps, have a different profession, altogether?


It is well established that tall men (and women) earn more than their shorter counterparts. Every few years a ‘new’ research study, conducted in different parts of the world, will reveal how much difference a single inch can make to one’s earnings. A 2015 article in The Atlantic stated that in Western countries, “an extra inch correlates with an estimated $800 in increased annual earnings.” Early nutrition, of course, plays a role in determining height, tall children strut confidence, and this could permeate their adult years, as well. A 2020 Forbes article reported that researchers in China had found that “each additional centimeter of height is associated with a 1.3 per cent increase in annual income.”

It would be nice to believe that beauty lies in the eyes of the beholder, and personality and characteristics determine our way in the world. But reality is far more superficial. How tall or short we are, how thin or fat, how fit or how unfit, how symmetrical or asymmetrical—essentially our bodies—mould how we navigate the world and how the world treats us back. How we look, influences how much (or how little) we are paid. It colours our personal and professional relationships.

While her beauty has determined the course of her life, Ratajkowski is conscious—starting from her childhood—that beauty is no accomplishment. In most cases, it is simply inheritance plus a helping of dumb luck. She asks, “Was it, then, that my beauty was a thing my mother had given to me? I sensed at times that she felt entitled to it in some way, like a piece of bequeathed jewelry, one that was hers, one that she’d lived with her entire life. It had been passed down to me heavy with all the tragedies and victories she had experienced with it.”

Ratajkowski’s book is meaningful because it is honest about the perils and perks of beauty. It is astonishing to realise that someone like her, who personifies conventional beauty, would still be insecure about her body, worrying about the shape and contours of her stomach and her ass, fretting over how much or how little she eats. As a teenager she gets nauseous thinking that her boyfriend could have found other girls more attractive than her. When a model talks about these insecurities one realises just how endless these battles are. Beauty is not an absolute, it is a constantly shifting goalpost, which is ultimately unreachable.

In the chapter, ‘Buying Myself Back’ Ratajkowski writes about how she was sued for posting a photo of herself on Instagram that had been taken by a paparazzo. During her career she often finds herself in the position where others (namely photographers) profit from photos of her that they may have shot and which they claim ownership of for posterity, irrespective of her reservations. These incidents have forced her to learn that “my image, my reflection, is not my own.”

Emily Ratajkowski’s book tells us how our bodies are our vehicle, our weapon, our vulnerability, our definition; and ultimately ours to do what we want with. It foregrounds our own questions around power, beauty and lovability

This raises the interesting point about who owns ‘beauty’. Is it the model/the muse or the painter/the photographer? When it comes to muse and artist, it invariably ends up toeing the gender lines of male artist and female muse. I think of Sharbat Gula who was recently in the news. The headline read, “Woman known as iconic ‘Afghan Girl’ granted refugee status in Italy”. Photographed by Steve McCurry, she featured on the cover of National Geographic magazine in 1985. With her piercing green eyes and steadfast gaze, she is arguably one of the most recognisable 12-year-old girls. While she came to symbolise the Afghan War of the 1980s, her stark beauty helped immortalise this image. I happened to walk into a McCurry photo exhibition recently while travelling in Spain. In a gallery of McCurry’s most iconic works, her face still stands out. But looking at a child staring into the frame, what do you see? A girl looking askance at a male photographer? While McCurry continues to profit from her image, what does she get in return?

Unlike Ratajkowski, Gula did not seek out exposure. As a child, she had no idea what that photograph could mean. Today we know her because of McCurry; but is that the renown she wanted? He saw the flame of her eyes and framed it, but does that image forever belong to him? Having seen McCurry’s exhibition just before reading My Body, I find that Ratajkowski while talking about herself could be talking about Gula when she writes, “I supposed this is the lifecycle of the muse: get discovered, be immortalized in art for which you are never paid, and die in obscurity.” It is noteworthy that a male photographer claiming ownership over the image of a woman is what unites two seeming opposites: an Afghan refugee girl and a model in the US.

Gula never sought out exposure. It was thrust upon her. Ratajkowski, on the other hand, revels in it. She writes, “For better or worse, I have always been drawn to overexposure. Making myself big gives me a sense of security. Be the loudest in the room, the most opinionated, the one in the most revealing dress. Do the most.” For her, putting “herself out there” is about “more power and less vulnerability”. Social media sustains itself on this sentiment—the more one puts out there the more influential one becomes. On the other hand, as someone who lurks in the margins of underexposure I find this fascinating, as I’ve always felt that putting one’s self out there means leaving one’s self open to attack. How does this overexposure, this curation of the self, affect our own sense of identity? Ratajkowski writes that she obsesses about the number of likes and comments she gets. For her, the likes and comments are a measure of her “allure”. Her accounts of vacationing for free in a luxury resort in the Maldives so that she can tag the resort on her Instagram and getting paid a “shit ton of money” to do so, shows the value of this overexposure. Putting oneself out there means more money, more attention and more power.

This power does not shelter one from pain. My Body also tells of abuse, of rapist- boyfriends, gropy celebrity men and violent photographers. The body can be a site of trauma. But in the final reckoning the body is also a site of pleasure, and more importantly, joy. This real joy cannot be found in social media validation, where it is the image that is framed and celebrated. This joy arises only when the body is truly free, when it is in the company of loved ones and engaged in an all-consuming activity, as Ratajkowski discovers while cycling with her husband and friend through muddy fields. In that moment when one doesn’t care what one looks like, one might exclaim, “What a joy life can be in this body.”