There is a sense of a great national cleansing and realignment 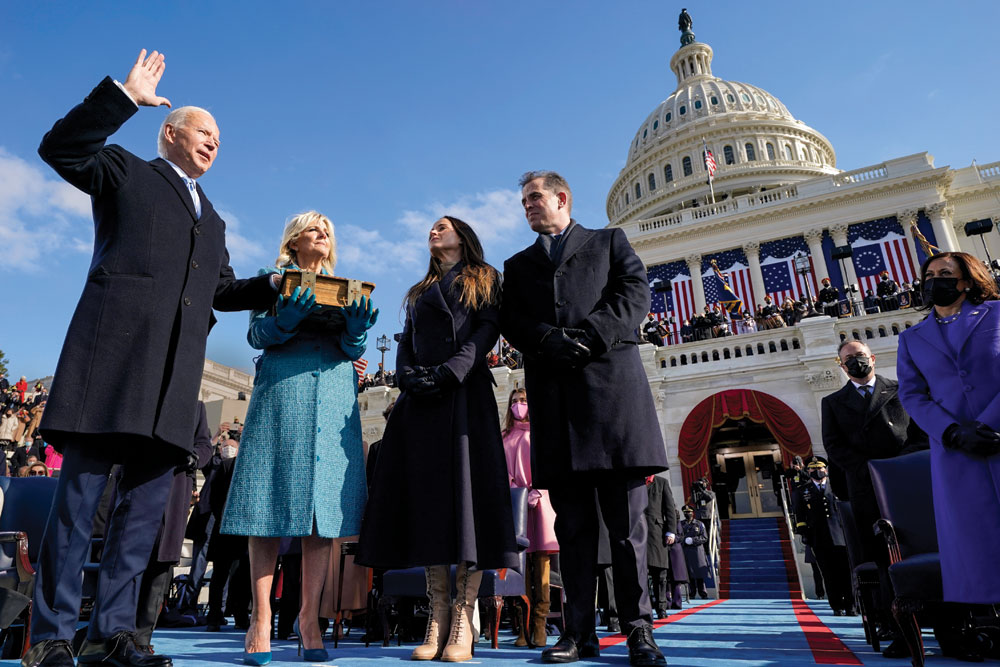 
Don’t tell my wife that I’m telling you this, but she sobbed at many moments during the inaugural ceremony on January 20th for Joseph Robinette Biden Jr, the 46th president of the US. Even as my son and I giggled (quietly) over his foppish French middle name, she teared up. I asked her later what had made her react that way, and she offered a stream of words: Pride. Happiness. Catharsis. Celebration. Euphoria. Relief.

Relief. I heard that word from many other Americans to whom I spoke after Biden had been sworn in. Sworn in, let us note, at the very building where only a fortnight earlier a horde of hooligans and insurrectionists—not simple yahoos, lest you be misled by the way some of them were costumed—had run rampant and unchecked. I confess to the world that I had wept on that day. My words to explain why?


After four years of Donald Trump, America wants—no, craves—a civil president. It’s not just a matter of style, or aesthetics. The incivility of the Trump era was soiling America’s soul. The incivility wasn’t confined to Trump, although he was the shit-flinger-in-chief. It was contagious, and spread to his opponents—though mercifully not to Biden, or so it seemed. (During the election campaign, Biden wisely chose to be taciturn, letting Trump defeat himself.) American politics under Trump turned into mortal combat, a Manichean machine-gunning by each side—Republican and Democrat—of the other. In his inaugural address, Biden described this as “uncivil war,” even as he called for its immediate end.

‘My whole soul is in bringing America together, uniting our people, uniting our nation,’ says Joe Biden, US President, January 20

A large part of the relief that comes with Trump’s departure—my wife’s relief, mine, and that of millions of others—is that the uncivil war will end for the most part merely by virtue of his departure. So petulant was his exit from Washington—so picayune his spurning of the niceties of transitional tradition—that his flight out of town was met with a giant and joyous blast of satisfaction. To see three past presidents—Messrs Clinton, Bush, and Obama—at the inauguration ceremony, and to see Trump’s own vice president, Mike Pence, vilified by his own boss but upright and thick-skinned enough not to care, was sufficient to reassure America that the machinery of civility had suffered little lasting damage. Trump’s absence, in truth, was a blessing. His very presence, with its anti-democratic aura and its reek of insurrection, would have been enough to curdle the ceremony. Can you imagine the camera panning to Trump as Biden spoke—perhaps when he uttered his words about “systemic racism” (about whose existence good people can disagree)—and catching the man from Mar-a-Lago in mid-smirk? Or in a tawdry shake of the head or eye-roll? And what would Trump have made of Amanda Gorman, the young poet, with her righteous, rap-like rhythms? Would he even have worn a mask?

There was a sense at the inaugural of a great national cleansing and realignment. Pence, erstwhile Senate leader Mitch McConnell, and other Republicans present there, represent the frontline of the party’s own battle against Trump, now made easier to win by Trump himself. His obsession with a stolen election resulted in the loss of two Republican Senate seats in Georgia—and with that, a loss of control to the Democrats of the Senate itself. Then came his incendiary speech in Washington on January 6th, followed by a storming of the US Capitol, his second impeachment, and his snubbing of the inaugural—a late-in-life CV packed with malice and misbehaviour that should render him forever a pariah. He speaks now of founding his own party. Yet he doesn’t have Twitter (a prohibition with which I disagree, for the record), and has much less support from the Fox News Channel than he used to: It is hard to make political advances (even for a man of Trump’s talents in these matters) without any presence in the mainstream media or social platforms. Trump is also ageing, indebted, and braced for lawsuits. And the Senate may yet disbar him from running for president in 2024. It’s hard to see him summoning the ammo for a brand new war of subversion.

All focus now is on Biden. America has a yearning not merely for civility but also for adult competence. More than 400,000 Americans have died from Covid-19—Xi Jinping’s gift to the world—and the country watched as its president floundered. Trump, a man bereft of scientific temper, left America to its own devices in a time of grave pandemic. His ideology-fuelled anti-scientism flooded the arena of public health, putting millions of Americans at risk. His administration made little attempt to observe and emulate the successes of other, less ‘exceptional’ countries in their war against Covid. Biden is now left with the job of repelling a virus that’s had a year to embed in America.

America wants a president who will make America…