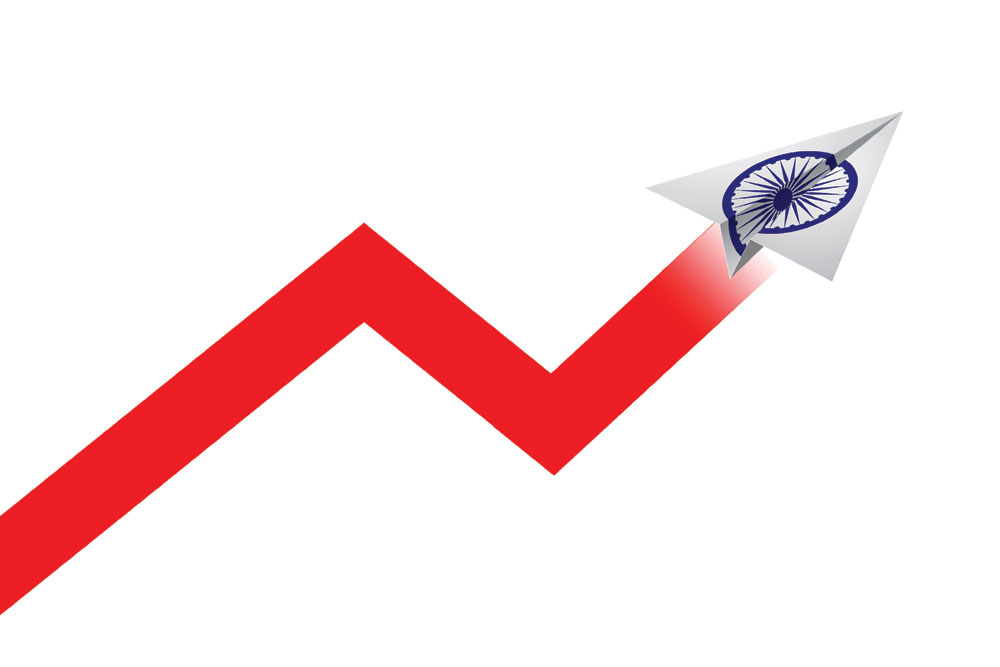 
AS THE YEAR COMES TO AN END, the Indian economy is a bright spot in a world dominated by gloom and conflict. The story can be summed up simply: a Covid-19 pandemic-ravaged economy finds its feet only to be thrown into turbulence caused by a far-off war and ends the year on a cheerful note.

The World Bank’s year-end assessment of the Indian economy pegs growth in 2022-23 at 6.9 per cent, up by 0.4 percentage points over its previous forecast. This is consistent with estimates made by the International Monetary Fund (IMF) in October. Among major economies, India will be the fastest growing in the year. It is worth noting that this rate of growth comes against a backdrop of global uncertainties that are only rising. The war in Ukraine does not seem to have an immediate end. China, another major driver of uncertainty, has internal problems from its poor Covid management as well as its external posture of belligerence. These two factors alone have taken a major toll on global economic growth. India has not been left unscathed even if it has managed to hold up well until now.

The problem for India arises on two fronts. First, dwindling exports just at the time when its export potential had begun to shine. Second, the massive increases in imports of fuel and other raw material supplies needed for production and consumption domestically. The World Bank report on India stated that very clearly in the context of the second quarter (2022-23) growth figures: “Net exports dragged growth, with exports growth reaching nearly 26 percent while imports surged by 45.1 percent. As a result, net exports weighed negatively on overall growth.” One factor drags down growth while the other feeds into inflationary fires. It is common now to say that India is “importing inflation”.

How has India managed these problems? To tackle inflation, the Centre extensively reduced import duties on a wide variety of items, such as edible oils, even as it increased export duties on iron ore and steel products. The latter were reduced or withdrawn in November when the situation began to normalise. To shield domestic consumers, especially the poor, the government continued with the PM Garib Kalyan Anna Yojana (PM-GKAY).

RBI was criticised for “falling behind the curve” on inflation and its coming out of its “slumber” in May was thought to be late. To an extent, the criticism is fair. But it also overlooks the complex dynamics of growth and inflation in India. Very often, the monetary and fiscal authorities have different priorities. In the last two-and-a-half years, there has been extensive coordination between the two to ensure that growth is not hit.

The danger now is that after waking up late, the central bank may have pressed the brakes too hard. One member of RBI’s Monetary Policy Committee (MPC), Jayanth Varma, said as much when MPC met from September 28 to 30. Varma said, “In my view, it is dangerous to push the policy rate well above the neutral rate in an environment where the growth outlook is very fragile. While the level of economic output has recovered to pre-pandemic levels, it remains well below the pre-pandemic trend line.” It is worth noting that on earlier occasions Varma had warned that the central bank was reacting too slowly to the emerging inflationary situation.


To tackle inflation, the Centre reduced import duties on a wide variety of items, such as edible oils, even as it increased export duties on iron ore and steel products. To shield domestic consumers, especially the poor, it continued with the PM Garib Kalyan Anna Yojana

Maintaining economic stability and ensuring growth in a volatile world is not easy. It is all the more so for India which is reliant on imports of fuel, fertilisers as well as a large number of raw materials and intermediate goods for domestic production and consumption. This year, the cost has been particularly high.

THIS HUGE BILL IS DUE TO THE DISLOCATION caused by the pandemic and the war in Ukraine. During the pandemic, PM-GKAY led to the distribution of wheat and rice to the tune of 105 million tonnes in 2020-21 and 93 million tonnes in 2021-22. These are gigantic sums of foodgrain that cost a tidy amount not just in procuring them but also in storage and transportation. Largescale distribution during the pandemic was understandable from an economic perspective as the lockdowns, migration of workers back to their villages and the continuing effects of the pandemic necessitated PM-GKAY. But at some point—as in all such cases of subsidies and expenditures—the decision to continue such programmes (or withdraw them) becomes political.

While the government was probably considering withdrawal, the war in Ukraine broke out in February this year, badly disrupting supply chains. The immediate effect was the shooting up of global cereal prices. Ukraine is one of the largest exporters of wheat. The Food and Agriculture Organization’s (FAO) cereal price index touched 173.5 in May, the highest in 18 years. Even in November, the index marked 150.4, representing a hardening of prices since July. In India, inflation, as measured by the Consumer Price Index (CPI) came down to 5.88 per cent in November, the first time since January this year when inflation has fallen below 6 per cent. But this is cold comfort as cereal inflation—accounting for 10 per cent of the index but by far the most important item of consumption—had steadily inched up from 3.39 per cent in January to an eye-watering 12.96 per cent in November.

This complicates the political and economic calculations for the government. If it abandons the PM-GKAY distribution, the strong inflationary pressures are certain to hit the bottom quartile of consumers—mostly poor or very poor—very hard. If it extends PM-GKAY beyond December, the danger of fiscal slippage is very real. Even if one ignores political calculations—there are Assembly elections in Meghalaya, Nagaland and Tripura in March next year followed by Karnataka in May—persistently high fiscal deficits feed into inflation and make RBI’s task of inflation management difficult. That, in turn, complicates the growth-inflation dynamics. As noted earlier, RBI has continued to maintain a ‘hawkish’ posture on policy rates.

Maintaining economic stability and ensuring growth in a volatile world is not easy. It is all the more so for India which is reliant on imports of fuel, fertilisers as well as a large number of raw materials for production and consumption

The bigger problem for India in its pursuit of growth is that the world is increasingly protectionist in its outlook. Securing export markets requires very tough bargains. India signed two free trade agreements (FTAs) this year, with UAE and Australia. The deal with Australia is an interim ‘mini FTA’, even as negotiations for a bigger deal remain a work-in-progress.

There is always the possibility that domestic demand can spur growth. The claim here is that India is a country of 1.4 billion people and, at least on paper, a gigantic market. But the 1.4 billion number is illusory: a vast fraction of that population is in no position to demand anything more than essential items. At the ‘top 1 per cent’, demand for many goods is approaching saturation. The result is that both at the top as well as the bottom, there are serious limits to growth. The old leftist dream of redistributing wealth or artificially creating incomes is bound to crash against hard realities. Willy-nilly, India has to search for export markets even if that quest is increasingly difficult.

There is, however, a consensus in government and among right-thinking people that attracting foreign investment in manufacturing, coupled with exports, is the right step forward. The Performance Linked Incentives (PLI) scheme is a step in that direction even as the scheme strives to ensure that past mistakes are not repeated.

There is some debate that the world cannot afford ‘another China’ and that India is best off trying to telescope its developmental experience by focusing on services instead of manufacturing. Much of this ‘debate’ is thinly disguised criticism of the Narendra Modi government. The growth experience of successful countries shows that without manufacturing and exports, it is impossible to take growth beyond a certain point. Even Bangladesh, before it hit a patch of turbulence, owed its success to low-cost apparel manufacturing and exports. Vietnam is another example. The trouble with such debates is that they are thinly varnished versions of the claims made in the 1950s and 1960s when ‘export pessimism’ was rife in India.

In the real world, policy choices are never unconstrained and often involve painful trade-offs. The year that is ending has shown the present government prioritising growth while using the policy levers at hand to keep inflation in check. To an extent, it has succeeded.